ARTICLE
Changes in Clinical Features and Demographics in Donors After Brain Death Over the Past 20 Years: A Single-Center Experience in the Republic of Korea
Won-suk Lee, Sangtae Choi, Jinmo Kang, Doojin Kim, Yongsoon Chun

Objectives: We investigated clinical characteristics and demographics of brain death in patients from a single center in Korea to identify possible changes in organ procurement by comparing early and late periods.
Materials and Methods: Potential donors diagnosed as brain dead and who had provided organ donation consent from May 2000 to May 2020 were considered. Donors were divided into 2 categories: early period (2000-2010) and late period (2011-2020). Demographic data, clinical risk factors, cause of death, use of inotropic and vasoconstrictor agents, laboratory findings, intensive care unit stay data, loss of donors, and number of donated organs were analyzed.
Results: Mean age of donors significantly increased in the late period (36.0 ± 12.0 vs 46.0 ± 15.1 years), but there were no significant differences in the proportion of females and the number of pediatric donors (<18 years). The number of donors who smoked decreased (61% vs 41%), but hypertension rate increased significantly in the late period (17.4% vs 31.0%). In the late period, fewer brain dead donors were lost (19.0% vs 7.59%) and use of vasoconstrictor agents was more frequent (25.3% vs 64.5%) than use of inotropic agents (73.1% vs 49.3%). In the late period, heart (19.0% vs 37.3%) and lung (0% vs 18.3%) procurement rates increased and the number of transplanted organs per donor increased (2.58 ± 1.6 vs 3.14 ± 1.50; P = .016). Causes of death were primarily from head traumas (34.4%), cerebral aneurysms (21.7%), spontaneous intracerebral hemorrhage (21.3%), and asphyxia/hanging (16.3%). Head trauma decreased in the late period (46% vs 29.7%; P = .021) but still constituted the most common cause of death.
Conclusions: We found no definite demographic changes in brain dead donors. Donors with cerebrovascular disease increased annually, but trauma was still the most common cause of brain death, with suicides being highly frequent.

Transplantation is the ultimate treatment for end-stage organ disease. However, the lack of donor organs compared with the number of patients waiting for transplant is the biggest barrier that needs to be overcome.1,2 In Korea, most organ transplants are from living donors, and the rate of organ transplants from brain dead donors is still very low. In 2019, 40 253 patients were registered on wait lists for organ transplant, which is approximately 3 times higher than the total number of 18 189 patients in 2010. Conversely, the number of donors after brain death increased slightly to 1818 people from 1108 people.3 Numerous approaches have been implemented to fill the gap, including a donor surveillance system introduced in June 2014 to report candidate deceased donors.4
The establishment of social consensus on organ donation, the use of marginal donors, the assessment of all possible brain dead candidates in pool lists, and the technical developments in donor management have led to considerable increases in organ procurement.5,6 According to the New England Organ Bank organ procurement organization, the number of brain dead donors has remained relatively constant since 2000; however, the number of donors after cardiac death have increased dramatically from <2.0% in 2000 to 29.3% of all donors in 2009.7 Donations after cardiac death have recently increased significantly by 2.6 times.8 However, donation of organs from patients after cardiovascular death is still not available in Korea, and brain dead donors are the only sources for organs.9
The health behaviors of potential donors have changed in Korea with changes in the lifestyle during the past few decades. The increased use of marginal donors at older ages with increased body mass indices (BMI) has led to positive attitudes toward donors with comorbidities.8,10 However, donor characteristics still affect clinical outcomes and the total number of transplanted organs.
The Gachon Medical Center is a tertiary hospital in Incheon in Western Korea. The number of brain dead donors have ranged from 20 to 25 annually. In 2019, this center ranked third place nationally. In this study, we aimed to investigate the clinical characteristics and demographics of brain dead patients and identify possible changes in organ procurement by comparing the early and late periods at our center.

In this retrospective review, we focused on potential donor patients who were diagnosed as brain dead (and who provided consent for organ donation) at our hospital from May 2000 to May 2020. Patients were categorized into 2 periods: from May 2000 to 2010 (early period) and from May 2011 to 2020 (late period). Clinical data included age, sex, BMI, blood type, marital status, clinical risk factors (diabetes, hypertension, hyperlipidemia, diabetes, and smoking), etiology and cause of death, the use of inotropic and vasoconstrictor agents, laboratory findings, ICU stay, the loss of donors, and the number of donated organs.

Ethics and approval and consent to participate
This study was approved by the hospital research ethics committee, and written informed consent was obtained from all participants.

Organ transplant is the final effective treatment in patients with end-stage organ failure. In 2019, 4354 patients received organ transplants from 450 deceased and 3852 living donors in Korea. Despite the work conducted by the Korean Network for Organ Sharing, the number of deceased donors increased by only 0.2%; in contrast, living donors accounted for most transplants, with an increase of 32.7% from 2018 to 2019.3 Expansion of the donor pool to include more obese donors, more elderly donors, and more marginal donors to shorten the waiting period are some activities that can increase the number of organs for transplant.5,6 The health behavior of potential donors can be changed with lifestyle modifications from social education and developments in health care services. Donor characteristics can closely influence ongoing organ donation patterns.

In 2015, deceased donors comprised <10% of all liver transplants in Japan, whereas 35% of donors in our country were deceased donors. However, the utility rates of organs in Japan were high: 72.5% for heart, 58.9% for lung, 79.6% for liver, 71.1% for pancreas, and 91.5% for kidney, which led to 5.3 ± 1.6 organ transplants per donor.12,13 There are more patients who are on heart and lung transplant wait lists in Japan compared with patient numbers in Korea. Despite the lack of brain dead donors in Japan, the number of transplants was much higher,14 with rate of use of lungs from donors after brain death in Japan of >60%. This rate is much higher than the 20% reported in the United States.15

In our study, donor age has progressively increased over recent decades. We found that the proportion of brain dead donors over 50 years old was significantly higher in the late period (16.6% vs 46.2%; P <.001). Routh and associates explored shifting patterns in donor selection criteria for liver transplants, which included the use of obese donors.10 Sadegh and colleagues showed a 15% growth in the recruitment of donors with underlying disorders, such as diabetes mellitus or hypertension.16 Data from the United Network for Organ Sharing in 1995 showed that 48.8% of donors died of trauma and that this number decreased to 34.9% in 2008.17 Most western countries have published the trends and etiology shifts from traumatic injury to disease.10,16-18 Some changes were identified in the diagnosis that led to donations.

In our study, the number of donors with cerebrovascular disease increased, the number with head trauma decreased, and the number of donors from suicide remained steady (Figure 1). The proportion of donors with head trauma decreased from 46% in the early period to 29.7% in the late period, but donors with cerebrovascular disease (intracerebral hemorrhage, infarct, and aneurysmal ruptures) stayed relatively the same (from 41.2% to 46%). There were no definite shifts from donors with head trauma to donors with other comorbidities as the most common cause of death at our hospital. However, this may be a transition period that could be explained by the low BMI and decreased numbers of smokers. In our study, head trauma was still the most common cause of death in donors, with intracerebral hemorrhage being the second most frequent cause correlated with the incidence of hypertension. Subarachnoid hemorrhage was highly frequent as a single disease. The overall proportion of hypoxic damage attributed to suicidal hanging incidents was higher as a cause of death compared with other studies. Unfortunately, our country showed the highest suicide rate (which ranged from 10% to 30%) among OECD (Organization for Economic Co-operation and Development) members for the second consecutive year since 2018.19

There are widely divergent opinions concerning the use of vasoactive medications in candidate donors with brain death, with no consensus or randomized controlled trials for the determination of suitable or unsuitable drugs.20 An experimental study demonstrated a reduced inflammatory response and improved oxygenation when noradrenaline was used.21 The use of vasoconstrictive agents has increased significantly in the late period. It is possible that their widespread use has made it helpful to maintain stable hemodynamics without potential donor loss.

In our study, the loss of potential brain donors decreased in the late period (19.0% vs 7.59%). Potential donor losses can remain high because of a variety of reasons, including institutional and legal problems. Because donor loss can be a result of various reasons, it is essential to monitor all steps carefully and further standardize techniques and legal systems to minimize losses of potential donors.

The number of total deceased organ donors in Korea will not change considerably unless there is a significant expansion of donations after cardiac death. The legislation regarding use of donors after cardiac death with social consensus could increase the pool of organs from deceased donors.

From the Department of Surgery, Division of Vascular and Transplantation, Gachon University Gil Medical Center, Incheon, Republic of Korea
Acknowledgements: We thank the reviewers and editors for their opinions and suggestions. The authors have not received any funding or grants in support of the presented research or for the preparation of this work and have no declarations of potential conflicts of interest.
Corresponding author: Sangtae Choi, Gachon University Gil Medical Center, Division of Vascular and Transplantation, Department of Surgery, 21 Namdong-daero, 774 beon-gil Namdong-Gu, Incheon, Korea 21565
Phone: +82 32 460 3688
E-mail: bcon1218@naver.com 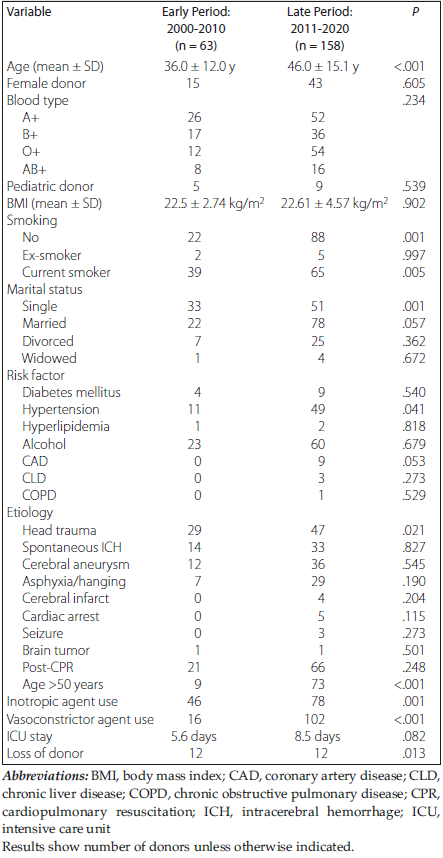 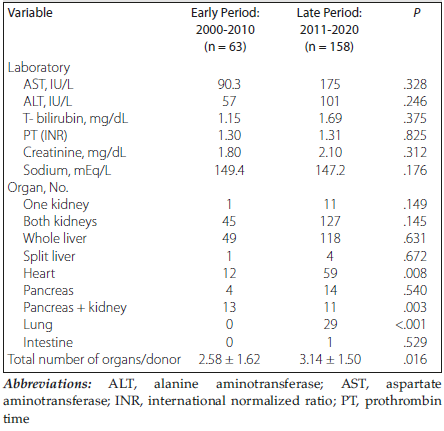 Table 3. Causes of Death in Potential Donors With Brain Death 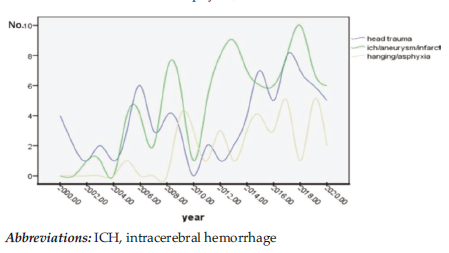 Figure 1. Annual Change in Cause of Death in Brain Dead Donors (Trauma, Cerebrovascular Disease, and Asphyxia)