Materials and Methods: Between January 2013 and November 2013, 35 patients with chronic liver disease who underwent liver transplant (the recipient group) and 30 healthy individuals who underwent living donor hepatectomy (the control group) during the same period were prospectively compared in terms of both preoperative and postoperative serum thiamine and pyridoxine levels. The groups were also subjected to intragroup analysis of preoperative and post-operative changes in serum vitamin levels to determine how a major surgical procedure affected serum vitamin levels. Mann-Whitney U test and Wilcoxon signed-rank test were used for intergroup comparisons and intragroup repeated measurements, respectively.

Conclusions: This study showed a lower serum thiamine level but a higher serum pyridoxine level in patients with chronic liver disease versus healthy controls. This difference persisted into the early postoperative period. This study also showed significant increases in thiamine and pyridoxine levels after transplant surgery.

Chronic liver disease is characterized by progressive destruction of liver parenchyma and, depending on the cause and disease stage, may lead to metabolism deficits of many nutrients, including slowed conversion of vitamins into active metabolites. So far, many studies have been published on the effects of chronic liver disease on fat-soluble vitamins such as vitamins D and K.1,2 Similar studies have also been conducted on water-soluble, relatively less stored vitamins, including vitamin B (thiamine) and B6 (pyridoxine).3,4 Irrespective of the underlying disorder, chronic liver disease has been shown to cause severe deficits in the metabolism of many vitamins, including pyridoxine and thiamine.3

The primary objective of this prospective study was to determine the changes in serum thiamine and pyridoxine levels in patients scheduled for liver transplant for chronic liver disease. For this investigation, patients who underwent liver transplant for chronic liver disease at Inonu University Liver Transplantation Institute between January 2013 and November 2013 were grouped as the recipient group (n = 40). The control group included 40 healthy individuals who underwent living donor hepatectomy at the same period after being examined for living donor candidacy. Five individuals from the recipient group and 10 from the control group were excluded due to various problems, including wrong barcode printing, loss of samples, and breakage of tubes during blood sample transport. As a result, our total study group included 65 patients (35 in the recipient and 30 in the control group) who were suitable for study entry.

Blood samples were obtained from patients in both groups both before anesthesia induction and 5 days after the surgical procedure. The samples were transported to the laboratory in maintained cold (cold chain). We used EDTA-containing purple cap tubes for thiamine measurement. After blood samples were centrifuged, plasma samples were analyzed. For pyridoxine samples, we used EDTA-containing purple cap tubes, but these were not centrifuged. The blood samples were analyzed by the Delta Analysis Laboratory (Ankara, Turkey). Both thiamine and pyridoxine levels were determined with a Shimadzu high-performance liquid chromatography (Shimadzu Corporation, Japan) device and use of the ImmuChrom kit (Immuchrom GmbH, Heppenheim, Germany). The reference levels for thiamine and pyridoxine are 35 to 99 ng/mL and 3.6 to 18.1 ng/mL, respectively.

Our secondary aim was to determine whether significant changes would occur in serum thiamine and pyridoxine levels after major liver surgery in recipients (native hepatectomy + liver transplant) and in control patients (donor hepatectomy). That is, we aimed to investigate whether liver surgery would have any meaningful effect on serum vitamin levels. For this purpose, we compared serum thiamine and pyridoxine levels of recipient and control groups preoperatively and at postoperative day 5. This study was approved by Inonu University Scientific Research Coordination Unit (project number 2013/127), and all patients signed the informed consent form.

Study data were analyzed with the IBM SPSS statistics software package (SPSS: An IBM Company, version 23.0, IBM Corporation, Armonk, NY, USA). Because the distribution of the continuous variables was not homogeneous, a Mann-Whitney U test was used for intergroup comparisons. The Wilcoxon signed rank test was used for intragroup repeated measurements. The intergroup differences for sex were tested with the Yates corrected chi-square test. The results are expressed as median, minimum to maximum, and mean (SD). P < .05 was considered statistically significant for all comparisons.

When we considered the reference range for thiamine (35-99 ng/mL), only 1 patient from the recipient and 1 patient from the control group showed serum levels below the lower reference limit. Compared with the recipient group, control patients had a greater preoperative thiamine level. A similar statistical significant difference was also observed for postoperative serum thiamine levels. Two interpretations can be made with regard to these results. First, although the thiamine level is markedly reduced in chronic liver disease versus that shown in healthy individuals, it was not reduced below the lower reference limit. Second, because we did not have long-term outcome data, we were unable to make an interpretation regarding how liver transplant alters serum thiamine levels over time. However, one should not overlook the contribution of some other factors, such as the normalization of the gastrointestinal system after healthy liver transplant and a lowering portal pressure in the recipient group.

A search of the English medical literature on PubMed and Google Scholar databases using the key words of thiamine, chronic, liver, and disease in various different combinations revealed no study that compared thiamine levels of patients with chronic liver disease versus healthy individuals. As far as we know, our study is the first in the literature in this regard, and thus we were unable to find another study for comparison. Levy and associates5 grouped their patients into 3 groups: those with alcoholic cirrhosis (n = 40), those with hepatitis C virus-related cirrhosis (n = 48), and those with chronic hepatitis C virus without cirrhosis (n = 59). The investigators did not detect any significant differences between the groups with respect to thiamine levels. They also reported no correlation between disease severity and vitamin thiamine levels.

An additional point that needs further clarification is the significant increase in serum thiamine and pyridoxine levels at the early post-operative period after a major surgery (ie, liver transplant) in the recipient group. Similar results were also found regarding the serum thiamine levels in control patients who also underwent a major surgery (donor hepatectomy). So far, no evidence-based rationale has yet been suggested for this phenomenon in the literature. From our point of view, this increase can be explained by a greater absorption or synthesis of vitamins, which are used as cofactors and needed to a greater degree after a major surgery. Furthermore, substituting an unhealthy liver with a healthy one may also have contributed to increased vitamin levels in the recipient group. Similar results could also have been observed if we had studied other vitamins and trace elements used as cofactors in humans. In any case, it is clear that our results should be confirmed by other prospective data.

In conclusion, this study showed a higher serum pyridoxine level but a lower serum thiamine level in patients with chronic liver disease compared with healthy controls. This difference persisted during the postoperative period. Significant increases in serum thiamine and pyridoxine levels after liver transplant were also shown. However, these results should be confirmed by large-volume prospective studies. 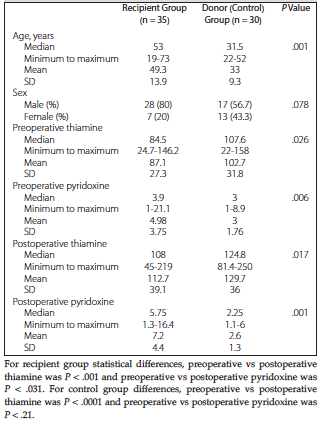