End-of-life wishes for critically ill patients can provide a second life chance as an organ donor after brain death, as this organ donation source can successfully treat and enhance the quality of life of transplant candidates. Although research has focused on challenges of organ generation from human stem cells and induced pluripotent stem cells, organ donation presently remains the only way to offer organs (such as liver, lung, and kidney) for patients at end-stage organ failure. Globally, there is an unbalance between the number of organs from brain dead donors and transplant candidates. In 2015, more than 30?000 transplants were performed in the United States.1 Every year, more than 100?000 patients of the estimated 1.7 million patients in the world need an organ due to end-stage organ failure.2,3

Potential organs for donation require the clinical maintenance of hormonal levels and hemodynamic stability. Hemodynamic, hormonal, and immune responses after brain death can induce a series of changes, which can negatively affect donor organ viability and transplant outcomes.4,5 The pulse indicator continuous cardiac output (PiCCO) system requires the placement of a thermodilution catheter into the femoral artery. Thus, as stated by previous studies, a PiCCO-plus device calibrated by trans­pulmonary thermodilution can monitor parameters such as cardiac output, contractility, afterload, volume management, and lung water in critically ill patients.6,7 The PiCCO system offers the possibility to measure the global end-diastolic volume (GEDV) and calculate the intrathoracic blood volume (ITBV) as preload indices. Extravascular lung water (EVLW) is a lung function parameter for estimating fluid in the pulmonary interstitial and alveolar spaces and also can be assessed by PiCCO monitoring. In our center, we carefully consider the potential availability of organs from donors with analyses of hemodynamic stability, immune response, and hormonal levels, which are essential factors for organ transplant. In this study, we reviewed these hemodynamic parameters in patients after brain death.

We reviewed organ donation potential of all patients with severe brain trauma who became brain dead during stays in the neurointensive care unit of the First Affiliated Hospital of Xinjiang Medical University from August 2016 to July 2017. Patients included were eventually liver and kidney donors for organ transplant.

Eleven patients with severe brain trauma were confirmed as brain dead by 5 experts. During confirmatory testing for brain death, organ donation had been discussed with relatives, as documented in medical charts of patients, with consent requested during the review process of independent medical specialists. The following data were extracted: patient age, sex, cause of death, neurological examinations of brain stem reflexes, PiCCO results, stress hormone levels, and records of interen­vironmental parameters. All patients were confirmed by laboratory tests to be negative for human immunodeficiency virus, hepatitis virus, and other infectious diseases.

The clinical parameters, including unresponsive coma with absence of supraspinal motor activity, absence of brain stem reflexes, and apnea, were tested up to operation for organ transplantation.

The following reflexes were assessed: papillary reflex, corneal reflex, oculocephalic reflex, vestibulo-ocular reflex, and cough reflex. The presence of apnea was carried out by a standardized technique.8,9

After brain death, all patients were monitored with the PiCCO-plus monitoring system. A PiCCO catheter (PiCCO-device; Pulsion Medical Systems) was inserted into the femoral artery, and a central venous line was inserted into the superior vena cava. Both lines were connected to the PiCCO-plus device to continuously monitor cardiac output, contractility, and afterload. Transpulmonary thermodilution was performed to monitor volume management and lung water. To obtain measurements, we administered a 15-mL bolus injection of ice-cold saline solution into the superior vena cava of each patient, and the thermistor of the PiCCO catheter was placed into the femoral artery. Transpulmonary thermodilution was performed 6 times/day, and the average value was stored in the PiCCO databank.

Ethical approval for this study was provided by the ethics committee of The First Affiliated Hospital of Xinjiang Medical University, with consent information provided by all families (approval number K201810-02).

Patient characteristics are shown in Table 1. The mean age was 44 ± 11.76 years, the acute physiology and chronic health evaluation score was 21.2 ± 6.54, and 4 patients were female. Among patients, 1 patient became brain dead immediately as a result of intracranial aneurysm rerupture.

Patients with brain and circulatory (cardiac) deaths are the main sources of organ donation, and these sources have been widely used globally for organ transplant. Since the 1960s, donations after cardiac death, followed by donations after brain death, have been broadly carried out in many transplant centers. With regard to prevalence, more than 90% of deceased donors are from brain death and less than 10% of deceased donors are from cardiac death.10 Moreover, brain dead donors have been thought to have superior organ quality and have become the most important source of organs. Cardiac deaths can be classified along different clinical parameters, according to the Maastricht classification, into 4 categories: uncontrolled (type I, brought in dead; type II, unsuccessful resuscitation) and controlled (type III, awaiting cardiac arrest; type IV, cardiac arrest after brain death).11

Current guidelines for donation recommend that transplants without medical complications are of the most benefit to patients. In this study, we described the use of PiCCO for potential donors after brain death, with agreement from patient’s family members before the final diagnosis of brain death was made. Application of the PiCCO system was needed to ensure survival of the circulatory system and to allow potential organs to remain viable. The PiCCO monitor uses the single thermal indicator technique to calculate volumetric parameters and is used in many intensive care units.12 The analysis of hemodynamic parameters is important as it allows therapies to be individualized.

In acute heart failure patients, the use of PiCCO can indicate those with increased mortality13; therefore, the use of PiCCO information for patients with acute heart failure is needed for treatment decisions. In another study, in patients with pulmonary edema due to early and delayed phases by subarachnoid hemorrhage with cardiac failure, information obtained with PiCCO monitoring, including measurement of EVLW index and cardiac index, was valuable for identifying pulmonary edema in patients with subarachnoid hemorrhage.14

In our study, we ultimately had 11 patients (7 males and 4 females) who contributed to successful major organ transplant operations, including 7 livers and 5 kidneys. Most patients became brain dead due to brain trauma, but 1 patient became brain dead immediately after an intracranial aneurysm rerup­tured. For these patients, the main laboratory parameters, including respiratory, metabolic, stress hormones, and blood levels, as well as immune-related factors, were monitored to preserve the functions of potential livers and kidneys for donation. We found that liver and kidney parameters were in the normal range, except for AST and ALT, which were slightly higher; immune-related factors such as procalcitonin, C-reactive protein, and interleukin 6 were above the normal range; and stress hormone levels were within the normal range. The potential functions of donated organs from these patients during hospitalization were intact until surgical operation, and cardiovascular disorders were controlled by vasoactive medicines. In our 11 patients, the PiCCO system was used before and during brain dead states. Among the PiCCO parameters, ITBVI and GEDV were in the lower range, whereas SVR was in the higher range.

The use of transaortic thermodilution also offers the possibility to measure the GEDV and calculate ITBV as preload indices. In a previous study, ITBV was confirmed as a valid preload index in correlation analyses during major hemodynamic changes due to vascular clamping and unclamping.15 In another study, results of PiCCO monitoring have been used for patients undergoing liver transplant.16 In a study of the correlation between cardiac index and volume measurements versus pressure preload parameters, a better correlation was shown between cardiac index and volume measurements than the correlation with pressure preload parameters.17,18 In our correlation analyses, the parameters of PiCCO, including cardiac index, cardiac function index, ITBVI, SVR, GEDV, EVLW, cardiac output, and central venous pressure, were examined to evaluate the correlation between PiCCO parameters and liver and kidney function. We found a correlation between ITBVI and TB, UCB, and albumin, as well as between EVLV and TB, CB, UCB, and albumin. In these cases, no patient had pulmonary edema.

As shown previously, GEDV is an independent predictor of the occurrence of pulmonary edema, and a GEDV of >921 mL/m2 is significantly associated with the development of pulmonary edema.19 In addition, an EVLW of >10 mL/kg is more accurate for diagnosis of pulmonary edema than clinical symptoms or chest radiography findings.20 In our study, GEDV was slightly lower and was correlated with AST.

The parameter EVLW,21 specifically elevated EVLW, is associated with a high mortality rate22,23; therefore, optimization of the EVLW index could be beneficial for patients. Although respiratory parameters, including arterial PO2 and PCO2, were not correlated with liver and kidney functions in our analyses, we did see a correlation between arterial PO2 and albumin. The median PO2 of all patients increased, whereas PCO2 remained stable. According to our results, no relevant impairment of respiratory function was observed, and there was no observed correlation between respiratory parameters and liver and renal function.

The metabolic parameters lactate and base excess are associated with liver and renal function; that is, lactate was associated with TB, UCB, albumin, and serum creatinine and base excess was associated with TB, UCB, and ALT. Lactate is a well-known tissue hypoperfusion factor and indicator of poor outcomes.24 Elevated lactate can be used to view states of tissue hypoxia/hypoperfusion. Under normal conditions, lactate is rapidly cleared by the liver, with a small amount of additional clearance by the kidney.25,26 A previous study suggested a correlation between albumin and lactate in acidotic patients.27 In our data, both lactate and base excess levels were almost below the normal range, thus consistent with previous data. The liver is the organ primarily responsible for lactate clearance, and the process of lactate clearance may be impaired by significant liver dysfunction.28,29 Base excess can define the metabolic component of acid-base disturbances, and it is estimated by how much acid or base is needed to adjust the pH back to around 7.40. In a hospital mortality study, strong correlations between both the low base excess and high base excess and albumin were shown.30 Our data and previous studies suggested that the metabolic components might be associated with parameters of liver and renal function.

Monitoring with the PiCCO system can be an option to evaluate organ function and its perfusion parameters after diagnosis of brain death or in patients with suspected brain death. We found good predictive values for determining good function in potential organs.

From the 1Department of Neurointensive Care Medicine, The First Affiliated Hospital of Xinjiang Medical University; and the 2Department of Intensive Care Medicine, Tsinghua Changgeng Hospital, Beijing
Acknowledgements: We are most grateful to the families of the patients and especially thank the doctors and nurses for their great work. The authors have not received any funding or grants in support of the presented research or for the preparation of this work and have no declarations of potential conflicts of interest. *Xiaopeng Li and Tuerhong Tuerxun contributed equally to the work.
Corresponding author:Tuerhong Tuerxun, Department of Neurointensive Care Medicine, The First Affiliated of Hospital of Xinjiang Medical University, Liyushan South Road 137, Urumqi, 830011, Xinjiang China
Phone: +86 991 4319317
E-mail: tuerhongt@sina.com

Table 1. Clinical Features of Patients With Diagnosis of Brain Death 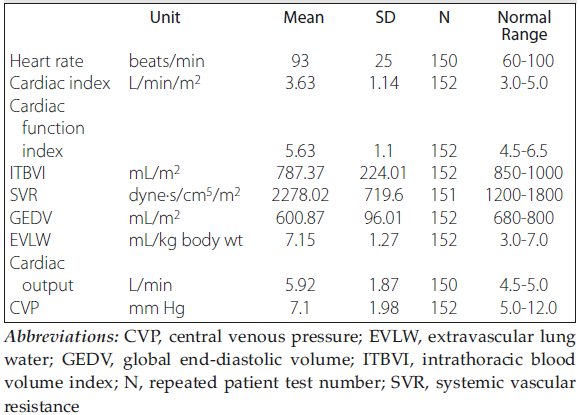 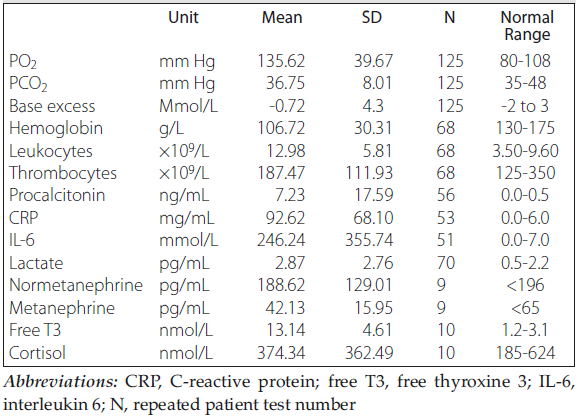 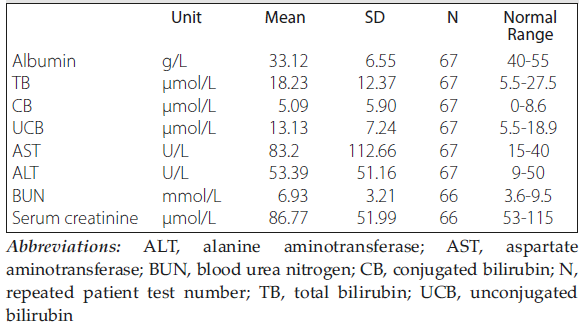 Table 4. Liver and Renal Function Parameters Measured in the 11 Patients