Chronic kidney disease (CKD) is a complex clinical problem with many treatment options. Kidney transplant is considered the best treatment option because of the improvement in quality of life. However, a successful kidney transplant may not mark an end to problems.1 Readmissions within 1 year after renal transplant are common. Causes of readmission are variable and may depend on the duration of hospitalization after transplant2 and on various patient-related and transplant-related factors. An understanding of incidence and exact causes of readmission after transplant would be helpful for identification of the patient groups at high risk of morbidity after transplant3 and formulation of management strategies, preventive measures, and follow-up protocols. Hence, the aim of this study was to find the incidence, causes, and factors responsible for late hospital readmissions (LHR).

Inpatient records and charts were assessed for the medical status of the patients, cause of CKD, comorbidities, vintage and modality of dialysis, and hospital admissions 3 months before the transplant. Collected patient data included recipient age, sex, height, weight, body mass index (BMI, calculated as weight in kilograms divided by height in meters squared), hepatitis C status, donor age, methods of immunosuppression and induction, duration of hospital stay, postoperative complications and secondary procedures, number, duration, and causes of hospital readmission after transplant, and methods of evaluation and management during readmission (Table 1).

Data are presented as mean values or frequencies of the total. Univariate and multivariate logistic regressions were applied to discover the risk factors. The chi-square test was applied to assess the Fisher exact association between categorical data and t test/Mann-Whitney test as appropriate. P < .05 was considered significant.

There were 28 LHR (22.4%) for the evaluation or management of graft dysfunction. Of the 28 patients admitted for graft dysfunction, 3 patients (14.3%)had acute cellular rejection, 6 patients (28.6%) had calcineurin inhibitor toxicity, and 1 patient each (4.8%) was diagnosed with collapsing glomerulopathy, focal proliferative glomerulonephritis, immunoglobulin A nephropathy, and hypertensive nephropathy. In 8 patients (38.1%), the cause of graft dysfunction could not be ascertained. New-onset diabetes after transplant and febrile illness were causes of LHR in 8 cases each (6.9%); 9 LHR (7.08%) were the result of other causes.

Incidence of LHR was high in our series (43.2%), and the most common cause of LHR was infection. Galindo Sacristan and colleagues also noted high prevalence of infection in the first year after transplant. They found that BMI was a predictor of early infection, basiliximab induction was a risk factor for severe infections, and CMV replication led to more infections and high serum creatinine at 1 year.4 Eidgahi and colleagues, in a study from Iran, found older age to be significant risk factor for viral infections after transplant.5

Urinary tract infections were the most common (40%) infection, with E coli being the most common organism responsible for UTIs. Yalci and colleagues also observed that the most common infection after renal transplant was UTI. They suggested the need for the prophylaxis and effective treatment of UTIs to prevent associated complications.6 Kazimoglu and colleagues observed that UTIs were most common during the first year after renal transplant. They suggested use of broad-spectrum antibiotics and also cautioned against antibiotic resistance.7 Gozdowska and colleagues noted that female patients are more prone to UTIs because of sex-specific anatomy and physiology. They observed that clinical symptoms may be masked by immunosuppression. Older age, high tacrolimus levels, and graft dysfunction are predisposing factors for UTIs.8

Cytomegalovirus infection was the second most common (24.44%) infection that led to LHR in our series. De Gracia-Guindo and colleagues suggested the use of the interferon ? release assay to monitor CMV infection because it was found that interferon ? response is a protective factor against CMV infection. They also suggested use of a clinical utility, the QuantiFERON CMV test, in combination with viral load DNA to monitor CMV disease as well as risk stratification after renal transplant.9

Among LHR because of infections, 10 (22.2%) in our series were caused by pneumonia. All of our patients recovered from pneumonia and were discharged. Mao and colleagues found that gram-negative bacteria were causative organisms in 80% of pneumonias with acute respiratory distress syndrome in posttransplant patients and also the mortality rate was very high.11

The second most common cause of LHR in our series was diarrhea, which led to 29 admissions (22.8%). Most patients in our series recovered, and only 2 patients required adjustment of immunosup­pression. Zhao and colleagues noted an increase in the incidence of diarrhea in posttransplant patients and also observed worse graft survival in patients with late severe noninfectious diarrhea. They suggested prompt adjustment of immunosup­pression therapy to improve outcomes.14

Shin and colleagues noted that diarrhea in posttransplant patients may lead to graft loss and/or patient death. They found that posttransplant patients were predisposed to diarrhea caused by immunosuppression and exposure to antibiotics. The main causes for diarrhea in their series were infections and drugs.16 Florescu highlighted the importance of differentiating between infectious diarrhea and that of noninfectious origin such as graft-versus-host disease, rejection, or medication.17

New-onset diabetes after transplant (NODAT) was responsible for 8 admissions (6.9%) in our study. In a study from Korea, Paek and colleagues found the incidence of NODAT to be 11.8%. Older age, higher waist-to-hip ratio, and high hemoglobin A1c levels before transplant were found to be the risk factors.18 In a study from India, Kumar and colleagues concluded that NODAT was associated with a higher rate of hospitalization and led to poor graft and patient survival.19

Age of the recipients was a statistically significant factor for LHR in our series (P = .002). Hogan and colleagues also found an association between older age and readmission after transplant.2

Sex of the recipients was not a significant factor for LHR in our series (P = .667). Matter and colleagues also suggested that outcomes of living donor renal transplants were not affected by donor sex or recipient sex.20

Body mass index was not significantly different in the 2 groups in our series (P = .665). Hill and colleagues conducted a meta-analysis and concluded that obese recipients were at a slightly higher risk of death-censored graft loss and delayed graft function, but there was no additional risk of death; they also suggested optimization of obese recipients before surgery could reduce the perioperative morbidity and risk of graft injury.21

Presence of 1 or more comorbidities was not a significant factor for LHR in our series (P = .732). Kleinsteuber and colleagues reported that preexisting diabetes mellitus, congestive heart failure, coronary artery disease, and peripheral artery disease reduced patient survival after transplant. They also noted that diabetes mellitus was associated with cell-mediated and humoral rejection and suggested that knowledge of preoperative comorbidities may be helpful in evaluation and follow-up of the recipients.22

In our center, we follow all of our kidney transplant recipients twice weekly for 1 month after discharge, weekly for the next 1 month, once every 2 weeks in the third month, monthly thereafter until completion of 1 year, and every 3 months after 1 year. Patients who require hospitalization for the management of any specific condition detected at the time of regular follow-up visit or during an unplanned emergency visit are readmitted and followed accordingly.

Use of induction therapy was not a risk factor for high incidence of LHR in our series (P = .945). Arms and colleagues concluded that overuse of immuno­suppression and the resultant adverse drug reactions led to a significant increase in hospitalizations and graft loss after renal transplant.24

Other than older age, the only other factor responsible for the higher incidence of LHR in our series was EHR. Patients who were readmitted in the first 30 days after transplant were also more prone for LHR (P = .009).

Incidence of LHR was high (43.2%). The most common cause of LHR was infection, particularly urinary tract infections. Age of the recipient and EHR were the predictive factors for LHR. 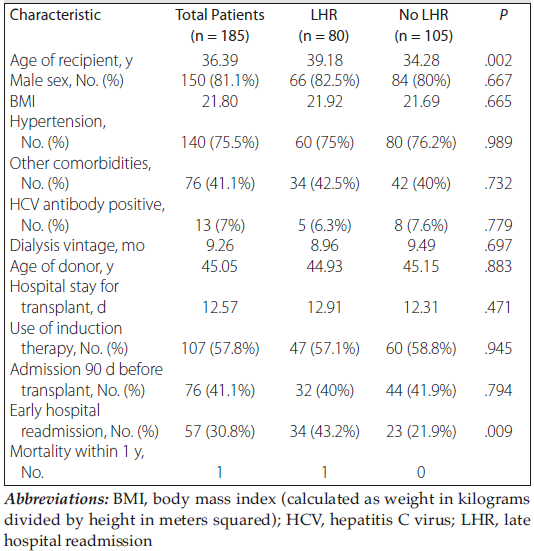 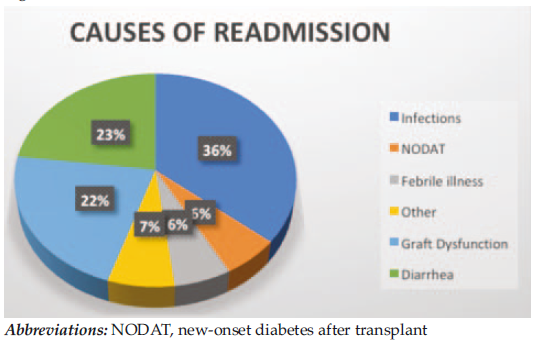