Objectives: Despite the wider acceptance of expanded criteria kidneys and the advances in immunosup­pression, clinicians remain sceptical when it comes to accepting kidneys from significantly older donors, especially for the young adult recipient population (age ?40 years).
Materials and Methods: We utilized prospectively maintained data from the United Kingdom Registry and analyzed the deceased donor renal transplant outcomes for 2 cohorts: (1) young recipients who received either a younger kidney or a kidney from a donor who was less than 20 years older (group <20; n = 2072) and (2) young recipients who received a kidney from donors who were 20 or more years older (group ?20, n = 764). We used life tables for survival and performed Cox regression analysis to identify significant variables.
Results: Median follow-up was 2918 days. The univariate analysis for graft loss showed the strongest predictors to be donor age, recipient age, recipient ethnicity, and delayed graft function, which retained their significance in the multivariate model. Graft survival rates were 94% versus 90% at 1 year, 86% versus 75% at 5 years, and 75% versus 63% at 10 years for group <20 versus group ?20, respectively. Respective patient survival rates were comparable for both cohorts: 99% versus 98% at 1 year, 97% versus 96% at 5 years, and 91% versus 91% at 10 years.
Conclusions: Our analysis showed that allografts from ?20-year-older deceased donors are beneficial and should be considered for transplant in younger recipients. Allograft survival may be worse compared with survival with younger allografts; however, young recipients do potentially better and survive longer compared with remaining on dialysis.

The ever-increasing demand for kidney allografts has led to a significant expansion of the kidney donor pool with use of circulatory death and expanded criteria donors. However, scepticism remains among clinicians when it comes to accepting kidneys from significantly older donors, especially for young recipients.

A recent study by the ERA_EDTA Registry1 showed that kidneys from younger donors have greater survival benefit than kidneys from older donors in adult recipients from 20 to 50 years of age, calling for updated survival outcomes with older deceased donors given the advances in transplant medicine. Schold and Meier-Kriesche,2 using the SRTR (Scientific Registry of Transplant Recipient) database concluded that older and frailer transplant candidates benefit from accepting lower quality organs early after end-stage renal disease, whereas younger and healthier patients benefit from receiving higher quality organs even with longer dialysis exposure. Rose and colleagues3 compared the Eurotransplant Senior Program and the United Network for Organ Sharing kidney allocation scheme for expanded criteria donor (ECD) utilization; although they suggested that some young patients who tolerate dialysis poorly may derive a survival benefit if transplanted rapidly with an ECD kidney, their study challenged the appropriateness of continuing to allow any consenting patient to accept an ECD kidney.

Presently, most allocation schemes avoid matching old donors with young recipients. For example, the United Kingdom (UK) kidney allocation scheme4 subtracts from the final score the points calculated by the following equation: age difference points = -1?2(donor - recipient age difference).2 However, there are still cases where old kidneys are offered to young recipients. The challenge that arises in these occasions is whether the risks involved with the acceptance of a significantly older kidney outweigh the risks of a longer stay on the wait list. In most such cases, the decision to utilize old donor kidneys is governed by several variables, such as wait times, access issues, and sensitization status.
In this retrospective review of the UK Transplant registry, we examined the 1-, 5-, and 10-year outcomes for 2836 recipients less than 40 years of age who received a deceased donor renal transplant between 2004 and 2013.

Data on all adult UK renal transplant procedures that were performed between 1996 and 2018 were obtained from the UK National Health Service Blood and Transplant registry (N = 49?265). No age restrictions were applied to donors. Patients who underwentdual kidney transplants, en bloc kidney transplants, living donor kidney transplants, ABO-incompatible transplants, and simultaneous trans­plants with other organs were excluded from our analysis. We excluded transplants after December 2013 in order to have a minimum of 5-year follow-up. Tacrolimus replaced cyclosporin in most immuno­sup­pressive regimens after 2002; therefore, we decided to restrict our study to a 10-year period between 2004 and 2013 (n = 13?562). Of these, 1504 cases were excluded because donor creatinine levels at retrieval were not recorded (n = 12?058). We selected recipients with a maximum age of 40 years; therefore, our analysis was based on a total of 2836 recipients. Recipients were further divided into 2 cohorts: (1) those who received either a younger kidney or a kidney from a donor who was less than 20 years older (group <20; n = 2072) and (2) those who received a kidney from donors who were 20 or more years older (group ?20; n = 764).

Our analysis was based on all kidney transplant data that had been submitted to the UK transplant registry by March 1, 2019. Median follow-up for our study was 2918 days (interquartile range, 1891 d). Donor and recipient characteristics for the 2 cohorts were reported using mean and SD for normally distributed continuous data and median and interquartile range for nonnormally distributed continuous data. The univariate analysis was carried out using t tests for parametric continuous data and Mann-Whitney U tests for nonparametric continuous data. The chi-square test was used for categorical data. Life tables and Kaplan-Meier curves were used to compare death?censored allograft and patient survival results, which were censored at 10 years. The univariate log-rank test (Mantel-Cox) was used to test differences in survival.

Donor?related variables considered for inclusion in the univariate analysis were age, sex, body mass index (BMI), blood group, donor type (donor after brain death/donor after cardiac death), ethnic group (white, black, Asian, mixed), cause of death (cerebrovascular accident, trauma, other), creatinine level at retrieval, and use of ECD (ECD was defined as donors older than 60 years and donors older than 50 years with any 2 of the following criteria: hypertension, cerebrovascular cause of brain death, or preretrieval creatinine level >1.5 mg/dL [133 ?mol/L]).5

A multivariate analysis was performed using a Cox proportional hazards regression model for the combined analysis of the statistically significant factors (P < .05). Because of the associations among donor age, recipient age, and donor ?20 years older than recipient variables, we only utilized the latter for the multivariate analysis. All tests were 2-sided, and P < .05 was deemed statistically significant. Analyses were performed using IBM SPSS Statistics version 25.

The HLA mismatch grade analysis for the 2 groups revealed more favorable mismatches for the group ?20 (P < .001), showing preference for better matches when it comes to older kidneys.

The increasing demand for kidney allografts has led to an expansion of the donor pool, and, as a result, older organs are now offered to young recipients. Transplant clinicians have remained puzzled when it comes to accepting kidney allografts from marginal donors, especially when there is a significant age gap between a young recipient and an old donor. Our analysis demonstrated that it could be beneficial to utilize kidneys from older donors for young recipients. The UK registry data showed that clinicians tend to be more selective when it comes to accepting kidneys from older donors and opt for a more favorable HLA mismatch and better renal function at the time of retrieval. The significantly higher utilization of older donor kidneys for recipients who are sensitized or those who require a retransplant shows that the decision to utilize these kidneys is often affected by the scarcity of offers for recipients who are difficult to match. However, further sensitization following a transplant is a concern, and caution is always advised for the utilization of older kidneys.6 As expected, kidneys from younger donors show less DGF and PNF, and recipients show better renal function at 12 months. Unsurprisingly, allograft survival is indeed signi­ficantly better for the younger group of kidney donors (group <20), with the greatest difference, as expected, at 5 and 10 years posttransplant (86% vs 75% and 75% vs 63%, respectively); however, patient survival is similar for both groups (P = .269).

Our study confirmed that donor age is well recognized as an important factor influencing kidney transplant outcomes, in agreement with previous studies on deceased donor kidneys.10 However, it should be noted that our data showed that patient survival posttransplant is similar for both cohorts of kidney transplant recipients (group <20 vs group ?20). This is an important finding when taking into consideration the mortality rates of patients on dialysis. Although significantly improved, the 3-year mortality rate has recently been estimated at 20% to 22% for dialysis patients in the United Kingdom.11 Another recent UK study on young adults highlighted the importance of transplant listing. More than half of the young adults start renal replacement therapy on hemodialysis, and 1 in 10 young adults is not listed for transplant by 5 years. Young adults on dialysis were about 20 times more likely to die than those who received a transplant. Overall, almost 1 in 10 young adults had died by 5 years from the start of renal replacement treatment.12

Last but not least, it should be noted that mortality on dialysis after graft loss is 16% at 1 year and 33% at 3 years, most commonly as the result of cardiovascular disease, infection, or cancer.13,14 Therefore, patients who lose a renal allograft are a high-risk cohort and would benefit from early relisting and retransplant.

This study used nationally prospectively collected data of kidney transplant recipients and has several limitations that are pertinent to the utilization of registry data. A major limitation of this type of study is the lack of a control group, which would consist of well-matched patients who remain on dialysis, waiting for a better quality kidney. However, forming such a group could raise ethical questions given the implications of a missing opportunity, especially for highly sensitized and difficult to match candidates. Missing donor or recipient data that were deemed important for the study led to the omission of recipients who had incomplete reports and/or follow-up. Our report would benefit from items that we were unable to report, including comorbidities and causes of death. Specific data on immunosup­pression regimens were not available, and, despite the use of similar immunosuppression regimens for kidney transplant recipients, it is difficult to know how different teams interpret biopsies and respond to rejection episodes.

Our study suggested that allografts from old deceased donors could be beneficial and should be considered for utilization for transplantation in significantly younger recipients. Allograft survival was potentially shorter compared with younger donor allografts. However, it is highly likely that young recipients do better with an older functioning renal transplant and survive longer compared with staying on dialysis. 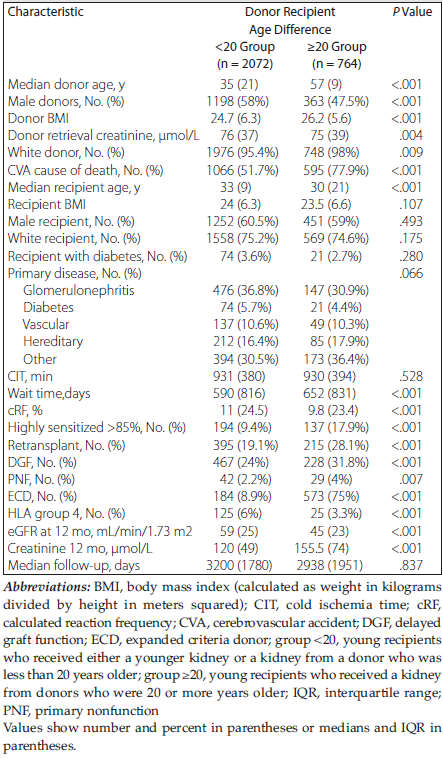 Table 1. Comparison of Donor and Recipient Characteristics for the Younger Donor and Older Donor Groups 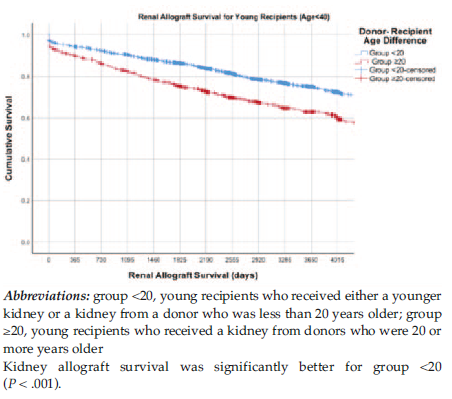 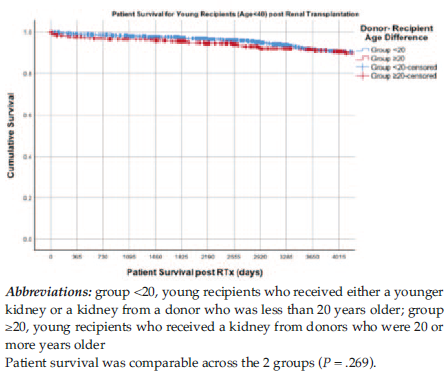 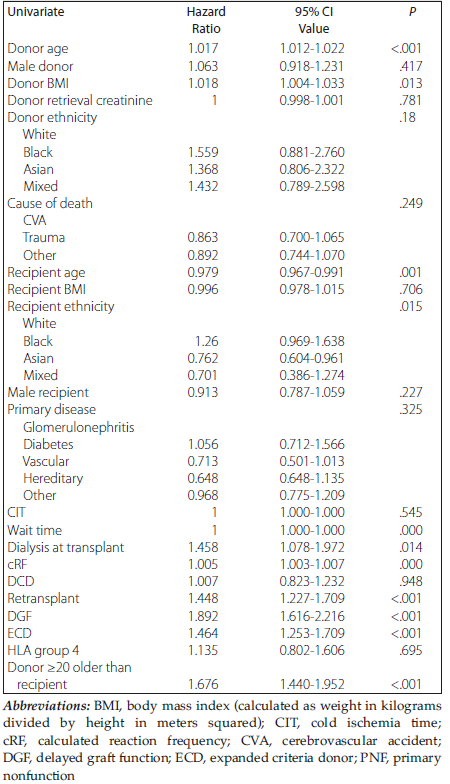 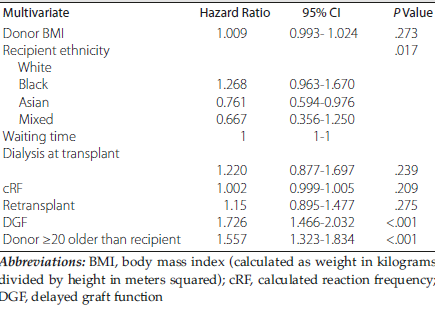