The major advantage of preoperative magnetic resonance cholangiopancreatography is that living liver donor candidates with complicated biliary tracts may not be exposed to unnecessary laparotomy. To the best of our knowledge, the case presented here features a condition so far not seen by the Liver Transplantation Society. A 27-year-old woman who presented to our clinic as a living liver donor candidate was evaluated but did not have a preoperative magnetic resonance cholangiopancreatography due to technical factors. After parenchymal transection, the right hepatic duct was incised just distal to the bifurcation when 8 fasciola hepatica parasites left the orifice of the remnant bile duct. The common bile duct was then irrigated, and the remnant bile duct orifice was closed, followed by a cholangiography, which showed no suspicious lesions in the biliary tracts. In addition, no suspicious lesions were identified during the postoperative cholangiography of the graft implanted in the recipient. The donor and recipient had postoperative enzyme-linked immunosorbent assay immunoglobulin G antibody titers of 12 and 4 U/mL (cutoff value = 10) for fasciola hepatica, respectively. Both the recipient and the donor received 2 doses of triclabendazole (10 mg/kg) during the postoperative period.

Living-donor liver transplant (LDLT) is a good alternative to decrease time on transplant wait lists because of extensive shortages with deceased donations, and it also provides the potential for elective surgery and preoperative planning. Before LDLT, donors are required to undergo many tests to evaluate their physiologic status and anatomy.1

The evaluation of LDLT donors at our institution has been previously presented in Dirican and associates.2 Recently, however, we have started to conduct magnetic resonance cholangiopancreato­graphy (MRCP) scans in donor candidates. Before proceeding with donor hepatectomy, we use intraoperative cholangiography to aid in decisions. Nevertheless, even with thorough work-up, unexpected findings can be encountered in some donor candidates during donor hepatectomy. In an analysis of “no-go” donors for LDLT, Guba and colleagues3 showed that, if all preoperative analyses are completely normal, unexpected intraoperative findings may preclude the progression of the operation, leading to premature termination of the donor hepatectomy. In their study, reasons for aborted donor operations included unexpected biliary anatomy, abnormal liver morphology, abnormal conditions such as stasis of the graft, and abnormal bleeding.3 Unexpected intrabiliary lesions such as fasciola hepatica encountered during LDLT have not been previously reported.

Fasciola hepatica in its adult form is a trematode that infects goat, sheep, and cattle as the primary host via an oral fecal route. Humans can be accidental hosts in its cycle. However, the life cycle of this parasite is complex and includes many forms before the adult fluke is formed. Metacercaria is the larval form of the parasite and causes the disease in human hosts. Larvae can perforate the intestinal wall and migrate to the liver through the peritoneal cavity and then perforate the liver capsule and enter the biliary system.4-6 The incidence is highest in Turkey and other countries in the Middle East and Asia. Estimated incidence in Turkey is reported to be between 0.03% and 0.8%, with greater abundance in the southeastern part of the country. Diagnostic tests include indirect hemagglutination, enzyme-linked immunosorbent assays, polymerase chain reactions, and direct microscopy.7

Fasciola hepatica can be observed in both adult and pediatric patients. In the acute phase, when the parasite has penetrated the intestinal wall and perforated the liver capsule to reach its destination, prodromal symptoms include fatigue, malaise, subtle fever, weight loss, lymphadenopathy, and respiratory symptoms, which are most probably due to diaphragmatic irritation. The chronic phase starts when the parasite is in the biliary tree of the host. This phase is usually asymptomatic in 50% of cases. Symptoms in the chronic phase are due to cholangitis and are usually associated with elevated trans­aminases. Imaging studies, including computed tomography and abdominal ultrasonography, can show hypodense/hypoechoic lesions in the liver parenchyma. The irregular borders in the biliary canal may be shown by MRCP.8

In the present study, we report a case of unexpected fasciola hepatica in a living liver transplant donor that was not displayed during preoperative work-up. We did not terminate the operation and continued the transplant; both the donor and recipient received postoperative antihelminthic treatment. This seems to be the first case of incidental fasciola hepatica encountered during LDLT in the literature.

A 27-year-old female patient (height = 178 cm, weight = 75 kg, 0 Rh-positive, remnant 30%, graft weight = 763 g) was admitted to our institute for partial liver donation to her 30-year-old brother. The recipient had cryptogenic cirrhosis, partial portal vein thrombosis, Child-Pugh score of 10/C, and a Model for End-Stage Liver Disease score of 13. A thorough evaluation of demographic characteristics was conducted, and blood group typing, complete blood cell counts, biochemical analyses, and virologic assays were performed. An abdominal contrast-enhanced multislice computed tomography was performed for volumetric analysis and evaluation of the vascular anatomy of the donor (Figure 1a to 1c). We did not perform MRCP tests in the patients as it was not a routine component of our laboratory evaluation. The results of the donor candidate were discussed among the multidisciplinary transplant committee, and the donor was found to be a suitable donor candidate.

After intraoperative exploration, a cholecystectomy was performed, with the cholangiogram obtained through the cystic stump (Figure 1d). The cho­langiogram showed that the extrahepatic and intrahepatic biliary trees were dilated. The extrahepatic bile duct and the ampulla of Vater were palpated, but no lesions were found to explain the dilated biliary system. After hilar and retrohepatic inferior vena cava dissection, the parenchyma was dissected with use of a Cavitron Ultrasonic Surgical Aspirator (CUSA Excel, ValleyLab, Inc, Boulder, CO, USA). The right hepatic duct, right hepatic artery, and the right portal vein were transected following the parenchyma transection.

As the right portal vein stump was being ligated, a few parasites were seen to exit from the bile duct stump (Figure 2). Massage was applied to the bile duct, and 8 parasites were extracted, which were consistent with fasciola hepatica. A parasitologist also confirmed that these were fasciola hepatica. The right and left hepatic ducts were probed and washed with saline. The bile duct was observed for 15 minutes; after confirmation of no further parasites, the bile duct was closed as usual. A control cholangiogram was performed through the cystic duct stump, which showed that the remnant biliary tree was still dilated. However, no suspicious contrast patterns or defects in contrast flow were observed (Figure 3). The biliary tree of the graft obtained from the donor was irrigated with saline in the back table.

Multiple cholangiograms were performed during graft implantation and after the surgical procedure; however, contrast patterns were not suspicious regarding parasitic infestations in the recipient (Figure 4). Postoperative immunoglobulin G enzyme-linked immunosorbent assays (DRG International, Springfield, NJ, USA) were performed in both the donor and the recipient. Fasciola hepatica immunoglobulin G levels were 12 U/mL (cutoff value = 10, positive > 11) in the donor and 4 U/mL in the recipient. Both the recipient and donor received 2 doses of triclabendazole (10 mg/kg) at 24-hour intervals. At 10 months posttransplant, no further problems were detected during follow-up visits.

Clonorchis sinensis-infested liver grafts have been reported, and posttransplant results seem satisfactory. Complications in these studies were not related to parasite infestation.10-13 Zhu and associates13 detailed 14 patients with Clonorchis sinensis-infected deceased-donor graft transplants who received praziquantel during the postoperative period. The biliary complication rate was around 14%, with the most common complication being biliary stricture or leak.13 Therefore, we suggest that a liver fluke-infested graft, as reported here, although undesirable, is not a contraindication for LDLT. However, because LDLT is usually an elective procedure that enables treatment of concomitant diseases found in the donor or recipient, we believe that preoperative therapy of suspected cases and reevaluation for transplant would be a safer approach.

Fasciola hepatica is a rare parasite that is mainly encountered in rural areas of eastern Turkey. Therefore, potential donor candidates from these regions should be analyzed for this parasite to prevent unexpected intraoperative encounters. Preoperative findings could then guide the necessary therapy. In our case, necessary routine laboratory work-up procedures (except fasciola hepatica serology) and imaging tests were performed by us during the perioperative period; results were examined by an experienced radiologist, and no biliary pathology was observed. Therefore, we continued with the transplant procedure. A ret­rospective reevaluation of the computed tomography scans of the patient showed clues of subtle intraluminal pathologies, which were inevitably missed in the preoperative period. As a result of this case, we now routinely screen donor candidates from southeastern Turkey for fasciola hepatica sero­positivity. Currently, we routinely eliminate donor candidates who are seropositive for fasciola hepatica.

In conclusion, this is the first case that showed an unexpected encounter with fasciola hepatica during living donor hepatectomy. As reported, both the recipient and donor received triclabendazole post­transplant and were monitored for any intrabiliary recurrence of fasciola hepatica. Follow-up showed no further complications, and both fully recovered. Our decision to continue the operation was because the parasite was only in the donor candidate, which we unexpectedly encountered during the donor operation. Furthermore, cholangiography after removal of parasites did not show any images consistent with parasites in the intrahepatic biliary tree. Decisions to proceed to transplant with an infected donor is still debatable, and whether to use or abort such a graft should be further investigated in larger studies. The best approach is to screen donor candidates from high-risk regions with serologic tests. However, in patients with no available donor alternatives, the decision of using a seropositive donor candidate after a treatment period can be considered. In situations where parasitic infestation of the donor is encountered intraoperatively, the procedure can safely continue if there are no donor alternatives or the recipient operation has progressed too far to the point of “no return.” 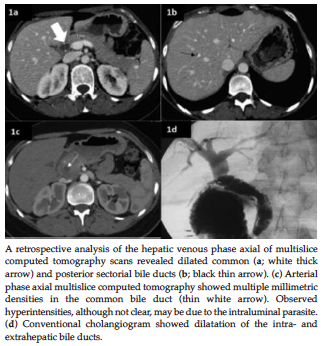 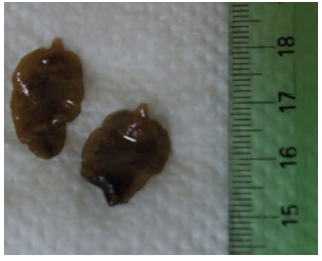 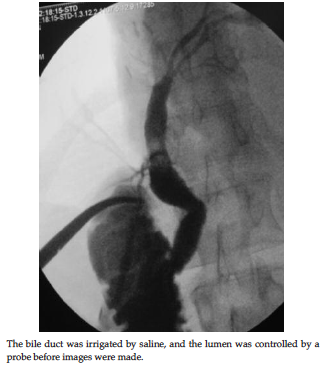 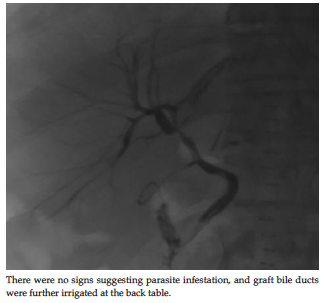