Liver transplant has occasionally been performed in the presence of congenital afibrinogenemia and has been rarely used to treat it. Historically, to safely manage coagulopathy during transplant, these patients have been administered a combination of fresh frozen plasma and cryoprecipitate. In this case report, we discuss the first reported use of recombinant fibrinogen to treat such a patient and the decision-making process considered to balance the thrombotic and hemorrhagic risks.

In this case report, we describe a multidisciplinary approach to orthotopic liver transplant in a patient with congenital afibrinogenemia complicated by hepatocellular carcinoma and cirrhosis due to chronic hepatitis C infection. This is the first and only published report documenting the use of a fibrinogen concentrate (RiaSTAP, CSL Behring, Marburg, Germany) for perioperative care after liver transplant. Previously published case reports have described treatment of congenital afibrinogenemia with cryo­precipitate transfusions during liver transplant and until the newly grafted organ produced native fibrinogen.1 We discuss the thrombotic and hemor­rhagic tendencies surrounding this disease and the perioperative considerations for orthotopic liver transplant in a patient with congenital afibrino­genemia who received fibrinogen concentrate prophylaxis.

Fibrinogen plays a critical role in normal hemostasis as the substrate for fibrin clot formation, the facilitator of thrombin binding and platelet aggregation, and the template for fibrinolysis. Because of these multiple hemostatic roles, fibrinogen disorders can lead to heterogeneous manifestations of phenotypes either with hemorrhagic or thrombotic complications and often a combination of both. Fibrinogen deficiency can be congenital or acquired and may result from either qualitative (dysfibrinogenemia) or quantitative (hypo-/afibrinogenemia) defects. The prevalence of congenital afibrinogenemia is estimated to be 1 in 1 million but is more common when consanguinity is present.

Patients with afibrinogenemia present from birth with a bleeding phenotype of variable clinical severity. The classic clinical presentation is umbilical cord bleeding. Women often experience menometrorrhagia and early trimester abortion. The diagnosis of fibrinogen disorders is suspected based on prolongation of the activated partial thromboplastin time, prothrombin time, and thrombin time. The diagnosis is confirmed by a low fibrinogen activity with or without low fibrinogen antigen. In the absence of consumption, the plasma half-life of fibrinogen is 2 to 4 days. Hemostasis is generally achievable with fibrinogen activity of 0.5 to 1 g/dL. Traditional treatment is on-demand replacement of fibrinogen with fresh frozen plasma, cryoprecipitate, or preferably fibrinogen concentrate. In cases of severe recurrent bleeding, secondary prophylaxis with the above therapies is indicated. Paradoxically, both venous and arterial thrombotic complications have been reported, suggesting an association with the use of replacement therapy.2 Care of such patients during surgery has become increasingly complex, with no current consensus on the optimal approach to best balance the risks of hemorrhage, poor wound healing, and provoked thrombosis.3

In this paper, we report a 68-year-old white woman with congenital afibrinogenemia of unknown genotype who had been diagnosed in childhood after presenting with large hematomas after routine vaccinations. Throughout her life, she was treated with on-demand fresh frozen plasma and cryo­precipitate infusions for various injuries, and only rarely did she exhibit any spontaneous bleeding episodes. Menarche at age 12 was complicated by intra-abdominal bleeding from a ruptured ovarian cyst, which required multiple blood component transfusions along with surgical intervention. During adulthood, she experienced various bleeding complications including diverticular bleeding, hemorrhagic hepatic cysts, and hemarthrosis, all treated conservatively with cryoprecipitate. Cryoprecipitate and fresh frozen plasma transfusion therapy later became complicated by severe transfusion reactions in the form of hives that eventually progressed to hypotensive crisis and bronchospasm. Future transfusion reactions were mitigated with antihistamines and steroidal premedications until she transitioned to RiaSTAP in 2011.

She was subsequently diagnosed with chronic hepatitis C, which was likely contracted from decades of blood transfusions. Treatment with ribavirin and pegylated interferon was discontinued due to thrombocytopenia that manifested as an intracranial hemorrhage. Hepatitis C viral clearance was successfully achieved in 2016 with combination ledipasvir/sofosbuvir therapy. In 2017, a surveillance ultrasonography suggested a dilated common bile duct, and follow-up magnetic resonance cholangiopancreatography showed no abnormalities within the pancreatic or biliary system. However, a new 2.5 × 2.2-cm right hepatic lesion suggested hepatocellular carcinoma. Given her history of portal hypertension, liver transplant was offered as a definitive treatment for hepatocellular carcinoma in addition to congenital afibrinogenemia. Baseline laboratory values for her hospital stay are detailed in Figure 1; at pretransplant, Model for End-Stage Liver Disease score was 40 subsequent to an international normalized ratio (INR) greater than 20.

Her perioperative course comprised focusing on balancing the risk of excessive blood loss from an uncorrected coagulopathy versus that of thrombosis resulting from overcorrection during a period of substantial inflammation. As typical of any liver transplant, this major abdominal operation can quickly result in high-volume blood loss because of the dissection, control, and ligation of the hepatic veins, hepatic arteries, and portal veins. Therefore, efficient and predictable hemostasis to manage the breaches in tissue and vasculature is paramount to a successful operation. The counter and seemingly paradoxical concerns of hypercoagulability stem from our more recent understanding of the thrombotic tendencies in end-stage liver disease (ESLD) patients. Although ESLD is considered a classic acquired bleeding disorder due to a number of anti-hemostatic principles, the counter pro-hemostatic drivers in liver disease must be considered, as eloquently elaborated by Tripodi and Mannucci.4 Importantly, the notion that ESLD patients are “auto-anticoagulated” must be reconsidered. The pro­coagulant risk includes thrombosis of veins like deep veins and portal veins as well as arterial thrombosis like coronary arteries, cerebral vasculature, and the hepatic artery. Notably, hepatic artery occlusion after liver transplant is a poor prognosticator, making early detection imperative. In addition to the inherent hyperco­agulability that is present in ESLD, the 2 other pillars of Virchow triad, stasis and endothelial dysfunction, are further provoked by the surgical procedure itself. Therefore, depending on the clinical scenario, the relative dysregulation of pro- and anticoagulant factors in ESLD determines whether bleeding or thrombosis will predominate in this population.

In our patient, the potential hypercoagulable risks placed a premium on avoiding overcorrection of her inherited and acquired coagulopathy to avert thrombotic complications during and after surgery.

The protocol that we designed to address these hemostatic concerns developed in a multidisciplinary fashion with input from representatives in transplant surgery, anesthesiology, hematology, and pharmacy. RiaSTAP is a fibrinogen concentrate approved for the treatment of patients with acute bleeding and congenital fibrinogen deficiency (afibrinogenemia and hypofibrinogenemia). Recent systematic reviews have suggested that the use of fibrinogen con­centrates like RiaSTAP may decrease allogenic blood product use, although these studies are prone to performance bias and more data are needed in this area. Furthermore, RiaSTAP use is not completely without risk, and there have been at least 28 reports of thrombotic events possibly related to adminis­tration and reflective of the aforementioned risks of hypercoagulability:5 Eight of the 28 cases even had a fatal outcome. Although the overall incidence of thrombosis in these 28 cases was only 1 event per 23 300 doses, this small but known and potentially significant increased risk of myocardial infarction, pulmonary embolism, deep vein thrombosis, arterial thrombosis, and cerebral infarction was discussed at length by our group during planning of the perioperative administration of RiaSTAP. We believed that the benefits of averting our patient’s transfusion reactions resulting from cryoprecipitate and fresh frozen plasma administration, coupled with the ability to quickly and efficiently correct her coagulopathy without overloading her intravascular system with blood product volume, which could potentially exacerbate surgical bleeding, seemed to outweigh a smaller risk of thrombosis.

Our patient received RiaSTAP (70 mg/kg) 1 hour before central line placement in the operating room. The patient had baseline and routine (during minutes 30 to 45) operative coagulation laboratory tests, including thromboelastograms, complete blood count, fibrinogen activity, prothrombin time/INR, and partial thromboplastin time. The desired fibrinogen level was 100 to 150 mg/dL pre­operatively with plans to only readminister RiaSTAP intraoperatively if the surgical field and the laboratory values indicated a coagulopathy as the cause of bleeding. The patient had remarkably stable coagulation laboratory values throughout the liver transplant procedure (Figures 1 and 2). She received a total of 400 mL of CellSaver (Haemonetics Corporation, Braintree, MA, USA) and no blood products during the procedure. Postoperative measurements included complete blood count, thromboelastograms, fibrinogen, and prothrombin time/INR checked every 6 hours, which indicated no need for RiaSTAP redosing. Low-intensity heparin infusion was initiated on postoperative day 1 for thrombosis prevention in the setting of a slightly decreased flow in the portal vein found on the liver ultrasonography. The patient was discharged 13 days later on aspirin (162 mg) for life. The patient, now 3 months after surgery, is doing well clinically, with excellent graft function and no episodes of bleeding or thrombotic complications.

This case report documents the first implementation of RiaSTAP for liver transplantation in a patient with congenital afibrinogenemia. These patients present the challenge of balancing concerns of hypofib­rinogenemia versus potential hypercoagulability induced by RiaSTAP administration. It is essential that the team weigh the possibility of overcorrection, which can lead to potentially catastrophic thrombotic complications, as its use has been associated with at least 28 reports of thrombotic events. Appropriate planning must also consider the need to conjugate the drug and time to effect, which could total 2 hours. Fortunately, RiaSTAP dosing can be titrated to target the desired fibrinogen levels and appropriately balance pro- and anticoagulant tendencies, making it a beneficial tool for many patients presenting for liver transplant. 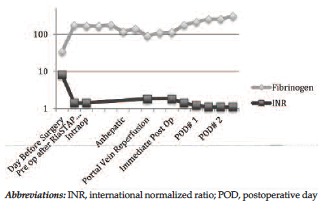 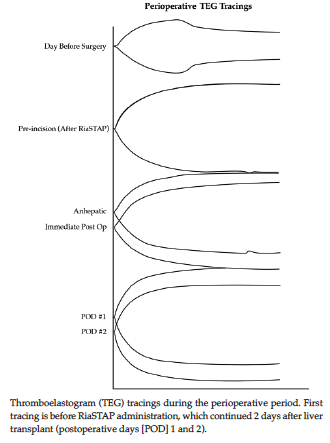