Objectives: There is an 18.9% discard rate among kidney allografts. Here, we aimed to determine predictors of kidney discard and construct an index to identify high-probability discard kidney allografts prior to procurement.

Materials and Methods: A total of 102 246 potential kidney allograft donors from the Organ Procurement and Transplantation Network database were used in this analysis. The cohort was randomized into 2 groups. The training set included 67% of the cohort and was used to derive a predictive index for discard that comprised 21 factors identified by univariate and multivariate logistic regression analysis. The validation set included 33% and was used to internally validate the kidney discard risk index.

Results: In 77.3% of donors, at least 1 kidney was used for transplant, whereas in 22.7% of donors, both kidneys were discarded. The kidney discard risk index was highly predictive of discard with a C statistic of 0.89 (0.88-0.89). The bottom 10th percentile had a discard rate of 0.73%, whereas the top 10th percentile had a discard rate of 83.65%. The 3 most predictive factors for discard were age, creatinine level, and hepatitis C antibody status.

Conclusions: We identified 21 factors predictive of discard prior to donor procurement and used these to develop a kidney discard risk index with a C statistic of 0.89.

Any effort to maximize the donor supply of kidney allografts is critically important in the face of the increased disparity between listed candidates and recipients of transplants. The mismatch between the supply and demand is exacerbated by an 18.9% discard rate among kidney allografts.1 From a different perspective, these discarded kidneys, nearly one-fifth of the potential allografts, represent an opportunity to increase the effective supply for transplant.

To promote efficient organ utilization, it is important to identify allografts that are at increased risk for discard. Many factors have been shown to contribute to kidney discard, including multiple donor characteristics, multiple transplant center characteristics, Organ Procurement Organization sharing, and time of procurement.2-9 A metric that relies only on donor characteristics applied indepen­dent of location could be useful to evaluate the risk of discard before the time of initial procurement.

A predictive index of combined multiple donor factors to evaluate kidney allograft discard risk could serve 2 purposes. First, the metric could stratify allog­rafts based on discard risk. Second, the metric could be used to preferentially allocate high-probability discard allografts to aggressive transplant centers. We speculate that high-probability discard organs are more likely to be used in aggressive transplant centers, which effectively increases the donor yield.10-12

Previous investigators have addressed this very issue and have constructed indexes to predict kidney allograft discard by using factors obtained after transfer of the donor to the operating room.3,9 We aimed to create a model to be used before initial procurement. We considered donor factors to deter­mine predictors of kidney discard and constructed a kidney discard risk index (KDSRI) based on these factors, to provide a scoring system for use in the clinical setting.

Study population
We retrospectively analyzed the United Network for Organ Sharing database to recognize all deceased adult donors, age 18 years or older, with at least 1 kidney procured for transplant between January 1, 2002, and September 30, 2016. Our analysis included data from the deceased donor registry obtained through the Organ Procurement and Transplantation Network to identify characteristics predictive of kidney allograft discard. A total of 102 246 potential kidney allograft donors were used in this analysis. In 79 039 of these potential donors (77.3%), at least 1 kidney was used for allograft transplant, whereas in 23 207 cases (22.7%), both kidneys were discarded. Donor demographic and clinical characteristics were summarized. This study was exempt from approval from an ethics board.

Statistical analyses
Data were analyzed with a standard statistical software package, Stata 12.1 (Stata Corp). Continuous variables were reported as mean values ± SD and compared with a t test. Nonparametric variables were compa­red with the Mann-Whitney U test. Contin­gency table analysis was used to compare categorical variables. Results were considered significant at a P value of less than .05. All reported P values were 2-sided. The primary outcome measure was kidney allograft discard. In this analysis, the 2 potential outcomes for deceased donors were either (1) the donor provided at least 1 kidney allograft for transplant or (2) both kidneys were discarded. Deceased donor clinical characteristics and laboratory values were the independent variables, whereas double kidney allograft discard was the dependent variable in logistic regression analysis. Risk factors that were significant in univariate analysis (P < .05) were included in the multivariate logistic regression analysis. We confirmed the stability of the model by stepwise elimination based on a P value greater than .05. The entire cohort was randomized into 2 distinct groups. The training set (68 164) included 67% of the cohort and was used to derive a predictive index for discard. The validation set (34 082) included 33% of the cohort and was used to internally validate the KDSRI.

Risk factors
Deceased donor risk factors for double kidney allograft discard only included factors available in the DonorNet (United Network for Organ Sharing) presentation of the initial organ offer. Laboratory values were terminal values before recovery. Continuous variables were categorized into clinically relevant groupings. Donation after cardiac death was included to create an index that can be universally applied to deceased donors.

Study population
Data from a total of 102 246 potential kidney allograft donors were used in this analysis. For 79 039 of these potential donors (77.3%), at least 1 kidney was used for allograft transplant, whereas, for 23 207 (22.7%), both kidneys were discarded. Donor demographics and clinical characteristics are summarized in Table 1. The rate of double kidney discard was consistent over the study period (Figure 1).

Data entry rate
All variables investigated in univariate analysis demonstrated at least 99% entry completion for our study population except history of myocardial infarc­tion (93%) and donation after cardiac death (11%).

With the KDSRI, we created risk groups based on 10-point percentile increments (Table 4). A KDSRI score of less than 0.425 corresponded to the bottom 10%, and a score greater than 58.664 corresponded to the top 10%. Discard percentage for each group was significantly greater than the bottom 10th percentile (Figure 3). The bottom 10% had a discard rate of 0.73%, whereas the top 10% had a discard rate of 83.65%.

The KDRI predicts double kidney allograft discard risk with a C statistic of 0.8246 (range, 0.8194-0.8298). Recipient and procedure specific factors in the KDRI could not be used to predict discard risk. These factors include HLA mismatch, cold ischemia time, en bloc transplant, and double kidney transplant.

Support of kidney discard risk index with machine learning models
We built several machine learning models and picked the 2 best models to compare with KDSRI. The 2 models were built with Support Vector Machine and Logistic Regression, and these predicted kidney allograft discard with C statistics of 0.889 and 0.897, respectively (Figure 4). These values are comparable with the KDSRI C statistic of 0.887 (range, 0.883-0.891) and strengthen the support for KDSRI. We show that, when trained with the same index, our best machine learning models achieve a predictive power that is statistically equivalent to that of KDSRI.

The study of kidney allograft discard is significant because nearly 20% of kidney allografts are discarded. The unmet need in kidney transplant is growing. Reduction of discard rate could serve as an additional source for sorely needed kidney allografts. An index to predict discard is important because the suggested strategies to reduce discard involve preferential allocation of high-probability discard allografts to aggressive transplant centers.14 An index is necessary to designate a kidney donor as high probability for discard prior to allocation. Previous investigators have produced indexes that rely on factors determined after transfer of the donor to the operating room. Marrero and colleagues3 constructed an index with a C statistic of 0.84. The KDSRI has a superior predictive ability, with a C statistic of 0.89, and can be determined before initial procurement.

There have been several proposals to reduce discard rates by alteration of allocation schemes to preferentially allocate marginal allografts to aggressive transplant centers.15-18 To facilitate these proposals, an accurate index is needed to predict discard risk. In this analysis, we identified 21 factors predictive of kidney discard and used these to develop KDSRI with a C statistic of 0.89. Furthermore, these predictors were highly effective to train supervised learning models with statistically equivalent C statistics of 0.89. Among these models, KDSRI can be best modeled by a straightforward, linear equation without loss of accuracy. This index can be used to identify kidneys with high probability for discard prior to organ procurement and prior to transfer of the donor to the operating room.

Limitations
The Organ Procurement and Transplantation Network deceased donor database only includes candidates who were transferred to the operating room with the intent to procure organs for transplant. Eligible donors who were outright refused for all solid-organ transplants were not included in this analysis. A more complete analysis would include all eligible donors, but these data are not available in the deceased donor Organ Procurement and Transplantation Network database. Another significant limitation is that this analysis does not account for center-specific behaviors or recipient factors. If a risk-averse center procures the allograft and refuses to proceed with the allograft, one may assume that the likelihood of allograft reallocation will be less than would be that case at a more aggressive transplant center. Despite these limitations, the KDSRI did achieve a C statistic of 0.89 when applied to over 100 000 deceased donors.

Since the passage of the National Organ Transplant Act of 1984 in the United States, data entry has been mandatory for all US transplant centers. Nevertheless, all patient registries suffer from variability in data entry. The findings from this study were based on large cohorts of patients and are unlikely to be significantly affected by small amounts of missing data.

We identified 21 factors predictive of kidney discard and used these factors to develop a KDSRI that was very predictive of double kidney allograft discard, with a C statistic of 0.89. This index can be used to identify kidneys of high probability of discard before transfer of the donor to the operating room for initial procurement. 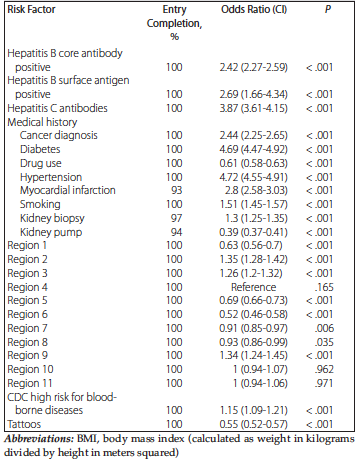 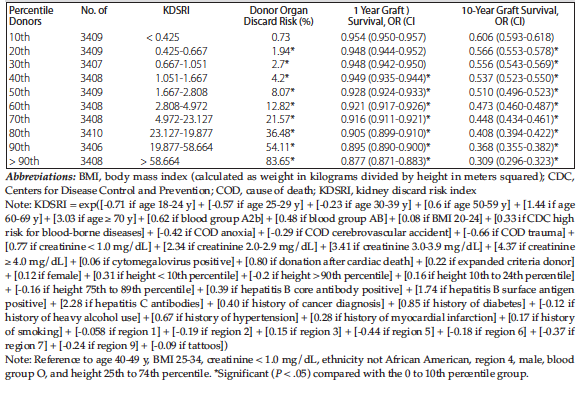 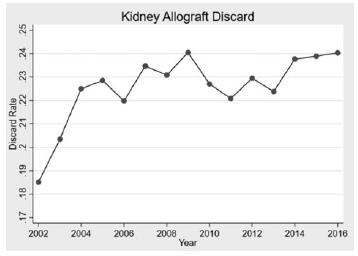 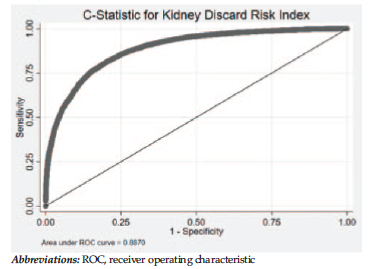 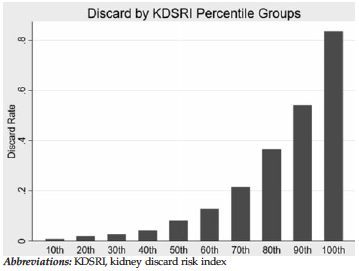 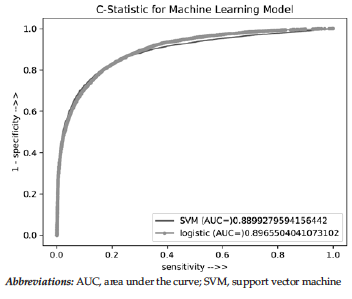