Echinococcal disease is an endemic disease for eastern Mediterranean countries. Various types of kidney involvement have been reported. Here, we report the first case of echinococcal disease on a transplanted kidney in a patient who was successfully treated with albendazole alone. The patient (a 38-year-old female) was evaluated for elevated creatinine levels 7 months after receiving a living-donor allograft. Standard immunosuppression therapy protocols were applied. Tacrolimus level was normal, and the patient was compliant with treatment. Creatinine level was 1.91 mg/dL (baseline: 1.2 mg/dL); proteinuria level was 1300 mg/day. The graft was found to be normal, as evaluated with standard sonographic methods. A kidney biopsy was performed, which showed that part of the cortical parenchyme was infiltrated by echinococcal protoscolices with hooklets. Because there were no cysts present on the graft, we concluded that disease was at an early stage. The patient was given albendazole for 3 months. After therapy, all echinococcal structures disappeared. Her creatinine level dropped to baseline, and proteinuria resolved. Echinococcal disease can affect transplanted kidneys. Albendazole is a valuable treatment option for patients who are not candidates for surgical resection.

Echinococcal disease (hydatid cyst) is an endemic disease for eastern Mediterranean countries.1 It is caused by larval stages of cestode Echinococcus species. Humans are accidental hosts of this parasite. The most common site of involvement is the liver, preceded by the lungs and brain. Kidneys are involved in only 2% to 3% of cases.2 Kidney involvement in various forms has been reported, including the following: direct invasion from liver; glomerulonephritis due to antigens; and, rarely, isolated renal involvement.2 Patients are usually asymptomatic, but complications such as cyst infection or rupture can cause symptoms. Diagnosis rarely requires histopathologic methods.

Hydatid disease is prevalent in Turkey. The most up-to-date study belongs to Yazar and associates with the help of the Turkish Ministry of Health. This study reported that the 5-year incidence of hydatid disease was 6.3/100 000.3 The study unfortunately lacked data from Istanbul and Ankara, the most populated Turkish cities.3 Literature on hydatid cysts in the Turkish renal transplant population is scarce. Cavdar and associates reported a case involving the native kidney in a renal transplant recipient.4 Here, we report the first case of echinococcal disease on a transplanted kidney diagnosed with an indication biopsy.

A 38-year-old female patient was evaluated for elevated creatinine levels 7 months after she received a living-donor allograft. She was given methyl-prednisolone, mycophenolate mofetil, and tacro-limus for immunosuppression. Her tacrolimus level was normal, and she was compliant with treatment. Her creatinine level was 1.91 mg/dL (baseline: 1.2 mg/dL). She had a proteinuria of 1300 mg/day. The graft was sonographically normal. A kidney biopsy was performed, which showed no signs of acute rejection. However, a part of cortical parenchyme was infiltrated by echinococcal protoscolices with hooklets (Figure 1). The patient denied any animal contact. Hemagglutination test was negative. Liver function tests were normal. There were no cysts on the liver, implying primary renal disease. Because there were no cysts on the renal graft, we concluded that disease was at an early stage. The patient’s clinical status was excellent; therefore, we did not want to perform a graft nephrectomy.

The patient was started on a regimen of albendazole, 400 mg twice daily. She developed mild neutropenia, mild hepatotoxicity, and problems with elevated tacrolimus trough levels. Therefore, the dose of albendazole was decreased by one-half, after which both neutropenia and hepatotoxicity resolved. Tacrolimus dose was also reduced to 33% of pretreatment dose. After 3 months of therapy, a new kidney biopsy was obtained, which revealed that all echinococcal structures disappeared. Her creatinine level dropped to baseline, and proteinuria resolved.

Hydatid disease must be considered as a differential diagnosis of renal cysts or masses, especially in countries for which the disease is endemic, such as Turkey. In the genitourinary tract, the kidney is the most common site of involvement.2 Mechanisms include direct invasion of cyst from liver; glomerular disease due echinococcal antigens; and, rarely, isolated renal involvement. Immunosuppression is a not a unique risk factor. Not all of the reported renal cystic hydatid cases are under immunosuppression, especially cases of direct invasion from the liver.5 A case report from Germany described a patient with hydatid disease of liver, lungs, and kidney who was treated with multiple surgeries and albendazole cycles.6 He had bilateral nephrectomies and was dialysis dependent for 6 years after a successful living-donor renal transplant; no hydatid disease recurrence was observed for 4 years under regular immunosuppression.6

Presentations may vary from asymptomatic to oliguric acute kidney failure. Lumbar pain and/or hematuria may be present. Macroscopic or micro-scopic hydaturia is rare but pathognomonic. Other presentations include obstructive nephropathy due to cyst compression, cyst infection, cyst rupture perirenal seeding, and retroperitoneal hematoma.5 For patients with typical presentation and history, diagnosis can be made with imaging techniques alone. Ultrasonography is the modality of choice.1 Serologic tests include indirect hemagglutination, enzyme-linked immunosorbent assay, and indirect immunofluorescence assay. These tests have high sensitivity for liver and lung hydatid disease, but such tests cannot be readily employed for patient surveillance.1 Unfortunately, these tests offer little value for renal hydatid disease; positive tests are not diagnostic, and negative tests do not rule out the disease. Histopathologic diagnosis is the criterion standard but is seldom needed. Treatment options include nephrectomy (either total or nephron sparing), puncture, aspiration, injection, reaspiration (“PAIR”), and/or azole-type antiparasitic drugs (albendazole, mebendazole).7

Our case is a unique presentation of isolated renal graft hydatid cyst disease. The patient was asymptomatic and had no history of suspected animal contact. The patient had no cysts on her graft, and her serological tests were negative; yet she presented with biopsy-proven disease. An extensive search of the English literature revealed no similar cases. Within 2 large series of 368 (Polat and associates8) and 329 (Gun and associates9) patients from Turkey, no graft hydatid disease was observed. Native kidney involvement was reported to be 3.8% and 1.8%, respectively.8,9 A Turkish renal transplant recipient living in Morocco was reported to have hydatid cyst on his native kidneys, which required nephrectomy for cure.10 Similar cases have also been reported from Turkey and India.4,11

Because our patient was in excellent clinical condition and had no visible cysts, we excluded graft nephrectomy as an option. Instead, we decided to give 3 months of albendazole treatment, as suggested for disseminated disease.12 Interactions between albendazole and tacrolimus have not been reported; however, one study defined an interaction with cyclosporine.13 Therefore, we decided to use the standard dose of 400 mg albendazole twice daily and check tacrolimus levels frequently. Because alben-dazole is an azole type of drug, one would expect tacrolimus levels to increase,14 and that was the case in our patient. She also developed mild neutropenia and mild hepatotoxicity (the ratios of aspartate aminotransferase vs alanine aminotransferase was 3 times the upper normal limit). Therefore, the dose of albendazole was decreased by one-half, after which neutropenia resolved and liver tests normalized. Tacrolimus dose was reduced appropriately. Control biopsy after 3 months proved this to be a successful treatment.

Echinococcal disease can involve transplanted kidneys. Albendazole is a valuable treatment option for patients who are not candidates for surgical resection. 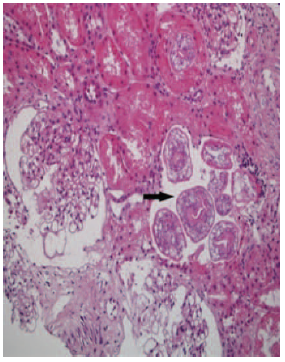