Materials and Methods: Perioperative data from 100 patients undergoing deceased donor liver transplant were reviewed, including platelet count-related data. Platelet counts were measured at predefined time points throughout the procedure: immediately before induction of anesthesia, at the early neo-hepatic stage (10 min after graft reperfusion), immediately after admission to the intensive care unit posttransplant, and 6 hours posttransplant. Platelet counts were then measured daily during stay in the intensive care unit.

The prevalence of thrombocytopenia in patients with liver cirrhosis is known to be as high as 70%.8 As mentioned, platelets have both beneficial and detrimental effects on liver grafts. In addition, the optimal management of thrombocytopenia among liver transplant recipients is still a matter of discussion. During liver transplant, a certain number of platelets are needed to maintain hemostasis; however, threshold values for platelet counts have not been defined.9 Moreover, hemostatic disorders during liver transplant are usually affected by the surgical stage, in particular, during reperfusion of the liver graft.10

Recently, balanced blood product transfusion with packed red blood cells (PRBCs), fresh frozen plasma (FFP), and platelets has been advocated as a resuscitation strategy during liver transplant.11,12 Assessing the pattern of changes in platelet counts during the procedure is necessary to determine the appropriate component ratios.

In this study, we evaluated changes in platelet counts during the perioperative period of adult liver transplant for optimal management of platelet transfusion in these surgeries.

Our retrospective study included 100 adult (age >18 years) patients who had undergone deceased donor liver transplant at the Organ Transplant Center of Mashhad University between July 2015 and October 2017. The study was approved by the University Ethics Committee (approval number: IR.MUMS.fm.REC.1396.184). The electronic medical record system of the center and patient charts were used for data collection.

The classic technique without venovenous bypass or the piggyback technique was used for liver transplant. Donated liver grafts were prepared using University of Wisconsin solution. Before liver graft reperfusion, methylprednisolone (500 mg) was administered.

After initiation of standard monitoring (pulse oximetry, 5-lead electrocardiography, and nonin­vasive arterial blood pressure measurements), anesthesia was induced using propofol (1-2 mg/kg) and 0.2 mg/kg cisatracurium. Maintenance of anesthesia was achieved with the use of isoflurane in low to moderate concentrations (0.5-1.0 minimum alveolar concentration) and bolus cisatracurium. A remifentanil infusion (0.05-0.3 μg/kg/min) and bolus fentanyl were administered based on the patient’s hemodynamic responses. Mechanical ventilation was delivered at a tidal volume of 8 to 10 mL/kg using a mixture of medical air and oxygen at a fresh gas flow rate of 2 L/min, and the respiratory rate was adjusted as needed to maintain normocapnia. After induction of anesthesia, a central venous pressure catheter and a radial arterial line were placed to allow continuous hemodynamic monitoring and blood sampling.

The intravenous fluid included 1% to 2% albumin in normal saline, and the rate of infusion was regulated according to central venous pressure, urine output, and volume of blood loss. The use of inotropes and vasopressors were at the discretion of the anesthesiologist and in response to the patient’s hemodynamic status. Transfusion of PRBCs was used to target hematocrit level of 25% to 30%. Coagulation components were replaced under throm­boelastographic guidance to correct intraoper­ative coagulopathies. Clinical coagulopathy with platelet count of less than 20 × 109/L was used as a threshold to initiate platelet transfusion postoperatively.

Statistical analyses
Categorical data were expressed as numbers and percentages and continuous variables as means and standard deviations. Continuous variables (perioperative changes of platelet count) were compared with repeated-measure analysis of variance or Friedman test, and categorical variables were compared by the chi-square test. Pearson correlation was used to assess the linear relationships between pairs of continuous variables. P < .05 was considered statistically significant. All statistical analyses were performed with the use of SPSS version 16 (SPSS: An IBM Company) and R software.

In this retrospective observational study, 100 patients who underwent deceased donor liver transplant were included. Mean age of patients was 43 years, and men were predominant by 73%. In donors, head trauma was the most common cause of brain death (57%). The demographic data of patients and the perioperative data are shown in Table 1.

The relationship between the main parameters, which included platelet counts and hemoglobin and INR values in the perioperative period, showed that platelet and hemoglobin levels had significant correlations between measurements during this time (repeated r = 0.28; P < .001). However, there was no significant correlation between platelet and INR levels in measurements over the same period (repeated r = 0.06; P = .8).

In this study, we noticed an abrupt increase in platelet levels during the early period after reperfusion in most liver transplant recipients. However, this result contrasts with what is stated in the literature.

As reported by Droc and associates,13 after liver graft reperfusion, platelet count decreased by 30% to 55% because of entrapment of platelets in the liver. The finding has also been reported in another article9 based on previous studies by Himmelreich and colleagues.14,15 The investigation included 10 patients who underwent liver transplant with routine use of venovenous bypass surgical techniques; to compen­sate for blood loss during the surgery, only PRBC and FFP were used. In addition, a continuous infusion of aprotinin (Trasylol; Bayer Leverkusen, Leverkusen, Germany) was administered throughout the transplant procedure.

Over the past 3 decades, median blood loss associated with liver transplant has fallen dramatically, owing to improvements in surgical and anesthetic techniques as well as organ preservation and a better knowledge of the hemostatic disorders associated with liver transplant.16 Interestingly, after 2012, there was a significant decrease in the use of homologous blood, FFP, and platelets, whereas the use of fibrinogen increased.17 Therefore, some articles that have been published on this topic may need to be reviewed.

Kim and associates reported that hyperfib­rinolysis was remarkable during the late anhepatic and early postreperfusion phases of liver transplant.18 Hyper­fibrinolysis spontaneously resolved within 1 hour after reperfusion of the graft and did not occur again. Interestingly, at the peak time of tissue plasminogen activator, the most important endo­genous activator of plasminogen, elevation corresponded closely to the times of the sudden rise of platelet levels in our study. The interpretation of this issue requires further study.

The main limitation of our study is the absence of laboratory tests regarding fibrinolysis (tissue plas­minogen activator, plasmin, plasminogen, etc).

In most of our recipients, the sudden increase in platelet counts occurred in the early postreperfusion phase of liver transplant and spontaneously resolved within 6 hours after transplant. Therefore, throm­bocytopenia, which is detected in coagulation tests, should correspond with clinical findings and be used as a guide for platelet transfusions. 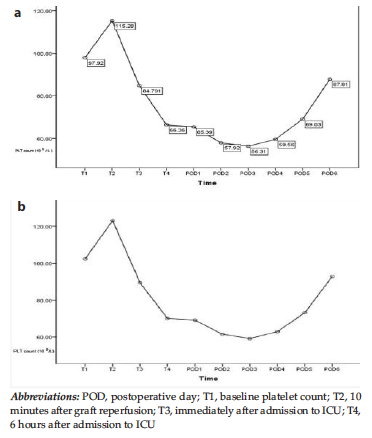 Figure 1. Overall Perioperative Trend of Platelet Counts During Liver Transplant (a) and Changes in Platelet Counts in Recipients Who Did Not Receive Platelet Transfusion Intraoperatively (b) 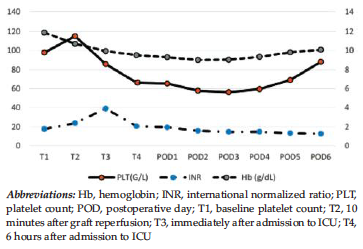 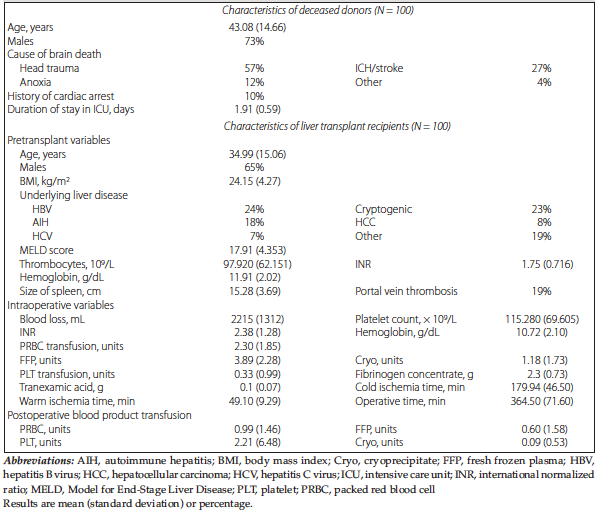 Table 1. Demographic Characteristics of Patients and Values of Perioperative Variables