Cavernous hemangiomas are the most common benign tumors of the liver and are usually asymptomatic. On the other hand, giant hemangioma and diffuse hepatic hemangiomatosis may become symptomatic by causing compression on adjacent structures, rupture, or consumptive coagulopathy. The coexistence of these 2 entities in an adult is extremely rare, and the literature, especially on their mana­gement, is sparse. We report the case of a young woman who developed a rapidly growing recurrent giant hemangioma and diffuse hepatic heman­giomatosis with significant pressure effects, raising the suspicion of a malignant tumor. She had previously undergone a liver resection and an aborted attempt at liver transplant elsewhere. As a preoperative measure, with an aim to shrink the tumor, she underwent arterial embolization and chemotherapy. After this procedure, she underwent deceased donor liver transplant. Her postoperative period was uneventful, and she was well at her 6-month follow-up. We highlight the challenges involved and the need for a multidisciplinary approach in managing these lesions. Liver transplant is an excellent option for patients who develop life-threatening complications or poor quality of life due to these benign liver tumors.

Diffuse hepatic hemangiomatosis (DHH) is a condition characterized by multiple hemangiomas involving one or both lobes of the liver. It is usually found in the pediatric age group and is associated with other anomalies. The coexistence of a giant hemangioma (defined as hemangiomas of more than 10 cm in size) with DHH in an adult, in the absence of extrahepatic manifestations, is extremely rare.1,2 In the absence of an identifiable trigger, rapid growth is uncommon, and these lesions are usually asymptomatic.1-3 Here, we present an adult patient with a history of ruptured solitary hemangioma during pregnancy treated by left lateral sectionectomy that was followed by rapid development of a giant hemangioma in the remnant liver with quick progression to DHH. The patient was successfully treated by orthotopic liver transplant (LT), thus expanding the list of unconventional conditions that can be successfully managed by LT. As described below, this case also supports the role of a multidisciplinary preoptimization prior to LT in such patients.

A 40-year-old woman was referred to our unit in December 2019 for LT. Her symptoms started in February 2018 when she developed acute-onset abdominal pain and distension during the third trimester of her second pregnancy. On evaluation, she was diagnosed with a ruptured hemangioma in segments 2 and 3 of the liver. She underwent emergency caesarean section, and a simultaneous perihepatic packing of the liver was done. She was transferred to a specialist center, where she underwent a relaparotomy and left lateral sectionectomy.

Intraoperative findings included a large actively bleeding hemangioma in the left lateral segment, with the rest of the liver appearing grossly normal apart from a few subcentimeter hemangiomas on the surface of segment 4. Her postoperative recovery was uneventful, and pathological examination of the excised liver segment revealed a cavernous hemangioma. One year later, in March 2019, she underwent a laparoscopic hernia repair for incisional hernia. A computed tomography (CT) scan done at that time showed a large hemangioma measuring 17.6 × 19.6 × 17 cm in segment 4, with a few smaller hemangiomas in the right lobe of the liver. Four months later, in July 2019, she developed recurrent abdominal distension, and paracentesis revealed hemorrhagic fluid. A CT scan showed a rapid increase in size of the segment 4 hemangioma, for which a transarterial embolization (TAE) of the segment 4 hepatic artery was performed.

Over the next 4 months, her condition deteriorated, and she developed recurrent ascites requiring frequent large volume paracenteses, pedal edema, significant weight loss, and liver dysfunction with recurrent bloodstream infections. She was evaluated and listed for deceased donor LT (DDLT) at another center. In November 2019, her DDLT was aborted intraoper­atively due to massive bleeding and dense adhesions. She gradually recovered from the attempted surgery and was referred to our unit for a second opinion.

On evaluation, she was severely malnourished (transverse psoas muscle thickness sarcopenia index of 16.2 mm/m) with Eastern Cooperative Oncology Group performance status 2. Blood investigations were unremarkable, with normal liver function tests and tumor marker levels. When 2 CT scans done 8 months apart (March vs November 2019) were compared, a 150% increase in the size of the segment 4 lesion was shown, to 32 × 23 × 20 cm, along with multiple small hemangiomas involving the entire liver, with multiple aberrant feeding arteries (Figure 1). The massively enlarged liver was now compressing the inferior vena cava, causing secondary Budd-Chiari syndrome. A positron emission tomography CT, performed to exclude malignancy and extrahepatic disease, was unremarkable. A specimen slide review from the previous surgery was performed, which showed no evidence of malignancy.

After the case was discussed at a multidis­ciplinary team meeting, the patient was offered DDLT with a preprocedure plan to control the growth of the lesions using chemotherapy with vincristine and prednisolone. She also underwent TAE of the feeding arteries on the day of the transplant procedure to reduce the risk of intraoperative bleeding and to aid explant hepatectomy. Access to the peritoneal cavity and the hepatic hilum was challenging due to dense vascularized adhesions between the abdominal wall, the previously placed inlay mesh, and the abdominal viscera. After an arduous and meticulous dissection, the explant hepatectomy was completed along with resection of the retrohepatic inferior vena cava and the right dome of the diaphragm. The explanted liver weighed 4580 grams (Figure 2). The deceased donor liver graft was implanted with caval replacement. Total intraoperative blood loss was 3 liters with an operative time of 660 minutes.

The patient was electively ventilated overnight and extubated the next day. Doppler scans of hepatic vasculature showed a triphasic flow in the veins and normal portal venous and arterial wave forms. An oral diet was commenced on day 4 posttransplant. She was transferred to the hospital care unit on day 6 and discharged home on day 16 after transplant. Her explant histopathology confirmed the diagnosis of DHH with a giant hemangioma. There was no evidence of mitosis, and immunohistochemical markers suggestive of malignant vascular tumors (STAT6, WT1, DESMIN, p53, D2-40) were all negative (Figure 3). Six months after transplant, she has remained well on follow-up, with a dramatic improvement in her physical condition.

Diffuse hepatic hemangiomatosis usually presents in infancy and is associated with Rendu-Osler-Weber syndrome or skeletal hemangiomatosis, resulting in high-output cardiac failure.3 Isolated DHH without extrahepatic lesions is extremely rare in adults. Even rarer is its co-occurrence with a giant hepatic hemangioma. Together, these benign lesions are typically slow growing, and their growth is often linked to triggers like pregnancy or estrogenic therapy.3,4

Our patient initially presented with an isolated ruptured cavernous hemangioma during her pregnancy, with no other discernible major lesions in the liver. Intriguingly, despite the absence of any known stimulating events, within 1 year, there was the development of a rapidly growing giant hemangioma along with DHH. This precipitous growth in the lesions raised suspicion of malignancy. However, imaging and pathological slide reviews, including immunohistochemistry, were unremarkable, allaying our fears. Because of its rarity, the management of these vascular lesions remains undefined. Various modalities, including TAE, radiofrequency ablation, and radiotherapy, have been attempted with varying degrees of success.1,3,5-7 Surgery in the form of resection of enucleation is reserved for the manag­ement of complications or when malignancy cannot be ruled. Liver transplant is an unconventional therapy for DHH, performed in the presence of life-threatening complications or liver failure.1,7-9

Our patient was offered LT as the rapidly growing lesion was not amenable to resection. She also was clinically deteriorating due to the secondary Budd-Chiari syndrome and had poor quality of life with severe malnutrition and sarcopenia. To reduce the risks involved in an already once aborted LT, medications (vincristine and corticosteroids) were started to stall the growth of the lesions. These antiangiogenic drugs have proven to be effective in hemangiomatosis and were used in our patient during the DDLT listing period.4,7,10 Because a difficult and bloody hepatectomy was anticipated, TAE was performed immediately before the patient was transferred to the operating room for the DDLT. This procedure may have helped temporarily reduce the inflow to the lesions, facilitating the transplant procedure.

This case represents an uncommon indication for LT; in this case, the rate of growth demonstrated by this “benign” tumor was exceptional. Our case is unique because all previously reported cases had a longer duration of progression before ultimately requiring LT. The case also demonstrates the challenges involved in managing such patients and the need for a multidisciplinary approach for successful treatment. Awareness of the coexistence of such benign tumors and their natural course of progression is important while making clinical decisions. Orthotopic LT is a feasible and excellent option in cases of development of life-threatening complications or poor quality of life in these patients with benign liver tumors. 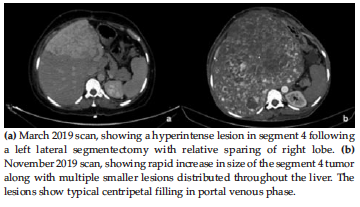 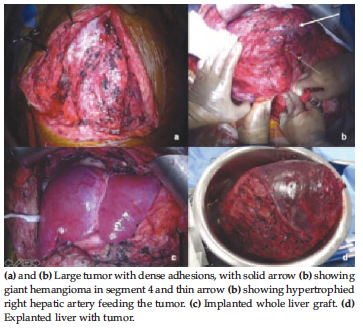 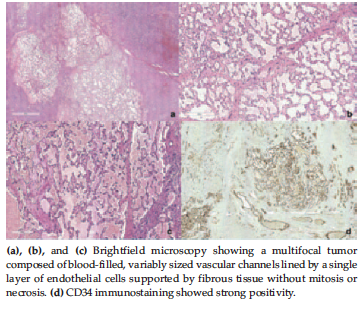 Figure 3. Immunohistological Examination of the Tumor