Objectives: We examined whether immediate tracheal extubation among pediatric liver transplant recipients was safe and feasible.

Materials and Methods: We retrospectively analyzed medical records of pediatric liver transplant recipients at Baskent University Hospital from January 2012 to December 2017. We grouped children who were extubated in the operating room versus those extubated in the intensive care unit.

Conclusions: Immediate tracheal extubation was well tolerated in almost half of our patients and did not compromise their outcomes. Patients who remained intubated had longer intensive care unit stays and higher hospital mortalities. Therefore, we recommend immediate tracheal extubation in the operating room after pediatric liver transplant among those children without intraoperative requirements for massive blood transfusion, high-dose vasopressors, high serum lactate levels, and open abdomen.

This study was approved by the Baskent University Institutional Review Board (project no. KA 17/279).

Patients over the age of 16 years and patients with missing data were excluded from the study. The same anesthetic technique was used in all patients. Anesthesia was induced with a combination of propofol (1.5-2.5 mg/kg) and fentanyl (3-5 μg/kg). Rocuronium was given to facilitate endotracheal intubation (0.5-1.2 mg/kg) and maintain paralysis during surgery (0.01-0.012 mg/kg/min). Anesthesia maintenance was achieved with a sevoflurane-air-oxygen mixture and an infusion of remifentanil (0.1-0.2 μg/kg/min). Routine monitoring included electrocardiography, pulse oximetry, capnography, nasopharyngeal temperature, invasive arterial pressure (radial pressure), and central venous pressure via the subclavian or internal jugular vein. After surgery, all patients were admitted to the intensive care unit. The same surgical, anesthesia, and intensivist teams were assigned during the perioperative period of all liver transplant surgeries.

Statistical analyses
Statistical analyses were performed with SPSS software (SPSS: An IBM Company, version 20.0, IBM Corporation, Armonk, NY, USA). Results are shown as mean and standard deviation for continuous variables and number (%) for categorical variables. P ≤ 0.05 was accepted as the cutoff for significance.

Immediate tracheal extubation was performed in 39 patients (48%) in the OR. Median postoperative duration of mechanical ventilation in those who were extubated in the ICU was 12 hours (interquartile range [IQR], 5-19). There were no differences in demographic characteristics, PELD score, MELD score, graft type, comorbidities, and preoperative presence of infections and antibiotic use between the 2 groups (Table 4). There were no differences in terms of preoperative laboratory values between the 2 groups (Table 5).

In our retrospective 5-year follow-up of pediatric liver transplant recipients, we noted some differences in perioperative parameters of patients who had undergone immediate tracheal extubation versus those who had not. Immediate tracheal extubation was well tolerated in almost half of our patients and did not compromise their outcomes. Patients who had experienced massive bleeding in the intra-operative period, had higher intraoperative serum lactate levels, and had received more erythrocyte suspension transfusions were observed to be extubated more frequently in the postoperative ICU. The use of vasopressors and antibiotics in the postoperative period, the frequency of infection development, and the presence of open-abdominal activity were also observed to be higher than in patients extubated in the OR. Reintubation frequency, duration of ICU stay, and hospital mortality rates were also reported to be higher in patients who were extubated in the ICU.

In our study, all patients with intraoperative massive bleeding were extubated in the ICU; accordingly, intraoperative transfusion of packed red blood cells was more frequently performed in this patient group. In a retrospective study of 128 pediatric patients conducted in 2017 by Nafiu and associates,10 incidences of postoperative prolonged mechanical ventilation were higher in patients who had undergone more intraoperative transfusions of packed red blood cells. In a retrospective study of 100 adult patients in which the predictors of early tracheal extubation in the OR after liver transplant were investigated, Zeyneloglu and colleagues11 found that patients with massive bleeding were mostly extubated in the ICU. The findings in these 2 studies are consistent with the findings of our present study regarding massive bleeding and transfusion findings. However, in a retrospective study by Fullington and associates8 of 84 pediatric patients, excess blood product transfusions did not prevent early tracheal extubation after liver transplant.

In our clinic, patients with massive blood transfusions are transferred to the ICU while still intubated. However, Fullington and associates concluded that the amount of blood transfusion was not, and should not, be a criterion for extubation; their regular practice was to carry out extubations without considering this. We believe that the difference between our study and the study from Fullington and associates8 may be a result of differences in clinical approach.

Lactate is an intermediate product that is created by carbohydrate and nonessential amino acid metabolism. It is generated in many places, including skin, erythrocytes, central nervous system, and muscle; it is cleared by 60% in the liver and 30% in the kidney.12,13 Lactate is seen in cases of imbalance between tissue oxygen delivery and consumption (ie, hypoxia-related cases) and may increase in cases that are not accompanied by hypoxia, drug intoxication, mitochondrial myopathies and hypoglycemia.14 In our study, there were significantly fewer extubations of patients with high intraoperative serum lactate levels. In a retrospective study with 44 adult patients who were admitted to the ICU after liver transplant, Basile-Filho and associates15 reported that lactate was effective in predicting 1-month mortality and that serum lactate levels were significantly lower in the surviving group. In a prospective study of 53 patients with postnecrotic cirrhosis, De Gasperi and associates16 followed lactate levels during different phases of liver transplant (preanhepatic, anhepatic, neohepatic) and during the first 48 hours after revascularization. They reported that a low lactate profile after liver transplant could be used as an indicator of early recovery. Compatible with the literature, our study has shown that high serum lactate levels may be associated with poor patient outcomes, such as prolonged mechanical ventilation.

In our study, all patients with an open abdomen were found to be intubated when the surgery was completed and extubated in the ICU during the postoperative period. The literature has many studies in which early complications related to open abdomens have included prolonged intubation, fluid loss, delayed early mobilization, and infection.17-20 Mechanical ventilation in our patients with open abdomen was also prolonged in accordance with that shown in the literature. Infections and antibiotic use were more frequent among patients who were extubated in the ICU than in those who were extubated in the OR. This may be due to the increased risk of ventilator-associated pneumonia in prolonged mechanical ventilation, as well as peritoneal cavity contamination-related intraabdominal infections caused by an open abdomen. Another reason may be that patients with open abdomens undergo recurrent operations.

In our study, the frequency of reintubation in patients who underwent an immediate tracheal extubation in the OR at the end of the surgical procedure was found to be statistically and significantly lower than in those who were extubated in the ICU. In parallel with our study, Hoffmeister and associates21 reported that reintubation frequencies were lower among patients extubated in the OR after liver transplant. Glanemann and associates22 reported a significantly higher reintubation frequency in adult patients who underwent prolonged mechanical ventilation after liver transplant.

Our finding is consistent with the literature, although there were insufficient data available in the literature related to the pediatric patient population.

In our study, length of ICU stay and hospital mortality rates were lower in children who were extubated immediately compared with those extubated in the ICU. Nafiu and associates10 reported that prolonged mechanical ventilation extended the length of ICU stay after pediatric liver transplant and increased posttransplant mortality rates. However, Fullington and associates8 found that ICU and hospital stay durations were longer, and only the length of the hospital stay was statistically significant in the group who had undergone an immediate tracheal extubation.

Our study has several limitations, mainly because of its retrospective design. The first limitation was that some of the perioperative data could not be reached. The second limitation was that, in a pediatric patient group, ages and body weights varied widely. However, to overcome this limitation, we tried to limit the amount of intravenous fluids or blood transfusion products in proportion to body weight. Finally, some parameters did not show statistical significance, which could perhaps be attributed to an insufficient number of patients.

For children with intraoperative massive hemorrhage, massive blood transfusions, high serum lactate levels, open abdomen, and high-dose vaso-pressor treatment and for those with a higher possibility of developing infection and likely to use antibiotics in the postoperative period, it might be more appropriate to lengthen the intubation period and plan extubation in the ICU after liver transplant. When these conditions are not met and if the patient satisfies universal extubation criteria in the postoperative period, immediate tracheal extubation after pediatric liver transplant is safe and feasible. Nevertheless, studies with more patients should be conducted to verify these results. 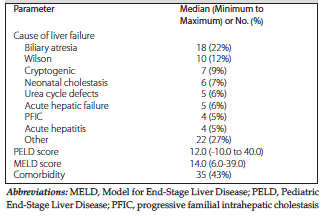 Table 2. Cause of Liver Failure, Scores, and Presence of Comorbidities 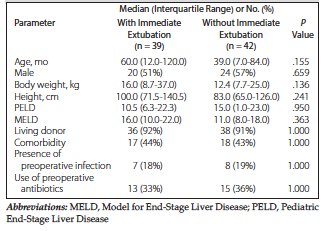 Table 4. Comparison of Patient Groups in Terms of Demographics, Scores, and Preoperative Presence of Infections 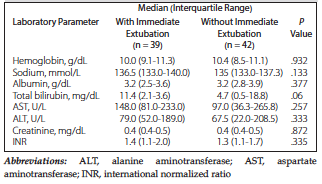 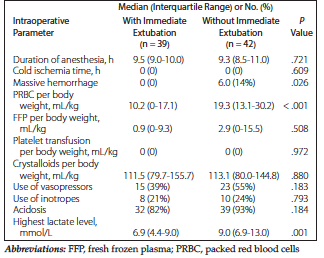 Table 6. Comparison of Patient Groups in Terms of Intraoperative Management 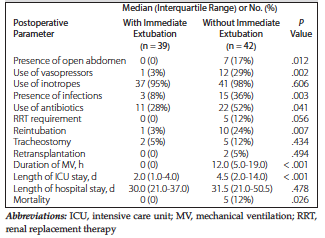 Table 7. Comparison of Patient Groups in Terms of Postoperative Management and Outcomes