Glucose homeostasis is frequently impaired in patients with end-stage liver disease, which is caused by multiple mechanisms such as peripheral resis­tance to insulin and hyperinsulinemia.1 In addition, liver transplantation (LT) is associated with various metabolic disturbances. During LT, blood glucose status often worsens in recipients, and progressive hyperglycemia may occur; indeed, blood glucose levels often peak after liver graft reperfusion.2 Hyperglycemia during LT can be caused by a variety of exogenous factors, including surgical stress, steroids, blood transfusions, and catecholamine vasopressors.3 According to results from experimental studies, hyperglycemia increases the inflammatory response, which can exacerbate ischemia-reperfusion injury.4,5 High blood glucose variability, but not hyperglycemia, during the intraoperative period and the early period after LT may also be associated with the development of certain complications, such as acute kidney injury.6 Hence, the most logical approach is to manage variabilities in blood glucose during LT.

There are few clinical studies on postreperfusion severe hyperglycemia (PRSH) in LT, and many of these studies have mainly emphasized the effects of PRSH on post-LT outcomes, such as infection, renal failure, and graft function.7

It is important to identify factors associated with PRSH to ensure appropriate management strategies. However, the relationship between donor factors and PRSH is not yet clear. In one study, Chung and colleagues8 reported the contribution of donor factors to PRSH in patients undergoing living donor LT. However, to our knowledge, the relationship between perioperative factors of deceased donor LT (DDLT) and PRSH has not been reported. In the present study, our goal was to identify perioperative factors associated with PRSH and with regard to deceased donor factors.

Our retrospective study included 100 adult patients without diabetes pretransplant (age ≥18 years) who had undergone DDLT at the Organ Transplant Center of Mashhad University between August 2013 and December 2019. The University Ethics Committee approved this retrospective study (approval number: IR.MUMS.MEDICAL.REC. 1397.174) and waived the need for written informed consent.

Exclusion criteria included recipients who had received dextrose (20%, 50%) during LT for cor­rection of hypoglycemia or hyperkalemia, liver retransplant, and multiorgan transplant.

The classic technique without venovenous bypass or the piggyback technique was used for LT. Donated liver grafts were prepared using University of Wisconsin solution.

All patients received standard induction anesthesia with fentanyl (1-2 μg/kg), propofol (0.5-2 mg/kg), and muscle relaxants with either succinylcholine and/or cisatracurium. Anesthesia was maintained with isoflurane in low to moderate concentrations (0.5-1.0 minimum alveolar concentration) and bolus cisatracurium. A remifentanil infusion (0.05-0.3 μg/kg/min) and bolus fentanyl were administered throughout LT based on the patient’s hemodynamic responses. Mechanical ventilation was delivered at a tidal volume of 8 to 10 mL/kg using a mixture of medical air and oxygen at a fresh gas flow rate of 2 L/min, and respiratory rate was adjusted as needed to maintain normocapnia. After induction of anesthesia, a central venous pressure catheter and a radial arterial line were placed to allow continuous hemodynamic monitoring and blood sampling. The intravenous fluid included 1% to 2% albumin in normal saline, and the rate of infusion was regulated according to central venous pressure, urine output, and volume of blood loss. Excessive metabolic acidosis (base excess less than -6.0) was treated with sodium bicarbonate. Body core temperature was maintained using a whole body-sized warm blanket.

The use of inotropes and vasopressors was at the discretion of the anesthesiologist and in response to the patient’s hemodynamic status. Transfusion of packed red blood cells (PRBCs) was used to target hematocrit level of 25% to 30%. Coagulation components were replaced under thromboelastography guidance to correct intraoperative coagulopathies.

Intraoperative blood glucose management
Glucose-containing solutions were not routinely used during LT. Blood glucose levels were assessed by arterial blood sampling at least every 1 hour until the end of LT. Mean blood glucose levels ≥12.7 mmol/L (230 mg/dL) during the neo-hepatic phase was defined as PRSH.

Patients were divided into 2 groups (PRSH and non-PRSH) using a mean blood glucose cutoff level of 12.7 mmol/L (230 mg/dL) during the neo-hepatic phase. Donor variables collected for analyses included age, sex, total ischemia time of liver graft, and fatty changes in the graft. In addition, prepared donor livers and recipient livers were weighed after hepatectomy, and the graft-to-recipient liver weight ratio was calculated.

This retrospective observational study included 100 patients who underwent DDLT. Of these, 55 patients were classified into the PRSH group.

Pretransplant recipient variables for both patient groups are shown in Table 2. Mean age of recipients was 45 years, and most were men (75%). Dominant causes for LT in our study group were cryptogenic cirrhosis (28%) and hepatitis B virus cirrhosis (21%). Among recipients, 53% of patients had Child-Pugh-Turcotte class B. The overall MELD score was 19.7 ± 5.12 points. All recipients had endotracheal tube extubation in the operating room.

Our observational study indicated that, during DDLT, processes leading to PRSH were influenced by donor-related factors, particularly graft-to-recipient liver weight.

To our knowledge, only 1 study evaluated the relationship between PRSH and liver donor factors. This retrospective study, by Chung and colleagues,8 identified that liver graft size, extent of fatty change, and PRS were independent donor-associated predictors of PRSH during living donor LT.

Graft size plays an important role in determining outcomes after partial graft LT. Indeed, graft-to-recipient weight ratio is an important criterion during selection of donors for living donor LT.9 In our study, we investigated whole graft LT from deceased donors. Various definitions of estimated standard liver weight have been proposed in the literature.10 Therefore, we considered the graft-to-recipient liver weight ratio in our study.

Graft size affects glucose influx into the recipient’s circulation. The sudden increase of blood glucose in the early neo-hepatic phase can occur as a result of glucose influx from the grafted liver, secondary to ischemic injury.11,12 Restoration of the transplanted graft function after LT is associated with suppression of PRSH.13

Postreperfusion syndrome has been defined as at least a 30% decrease in mean arterial pressure occurring during the first 5 minutes after liver graft reperfusion and lasting longer than 1 minute.14 The underlying pathophysiological mechanisms of PRS associated with hyperglycemia are not well known. However, production of inflammatory mediators may contribute to PRS, which can eventually lead to activation of hepatic gluconeogenesis and peripheral insulin resistance.15 Interestingly, hyperglycemia exacerbates ischemia-reperfusion injury by inducing inflammation.16

In our study, we found that incidence of PRS was not significantly different between the 2 study groups; thus PRS may have a negative effect on intraoperative glucose homeostasis independent of PRSH. Moreover, patients with PRSH needed more PRBC transfusions and higher doses of vasopressor and sodium bicarbonate during surgery. Hence, PRSH is a complex and unclear issue.

An accepted criteria for liver donation at our center is graft fatty change of ≤30%. In the present study, our 2 study groups showed no significant differences in the extent of graft fatty changes, which is contrary to the results from Chung and colleagues.8 In light of these contradictions, further studies are recommended to explain the differences in findings between DDLT versus living donor LT. The main limitation of our study was that glucose-related cytokine levels were not assayed.

Incidence of PRSH in DDLT recipients was strongly influenced by donor-related factors. The graft-to-recipient liver weight ratio was identified as an independent predictor of PRSH. Because PRSH is a complex process and might be an indicator of graft outcome, further studies on this topic are recommended. 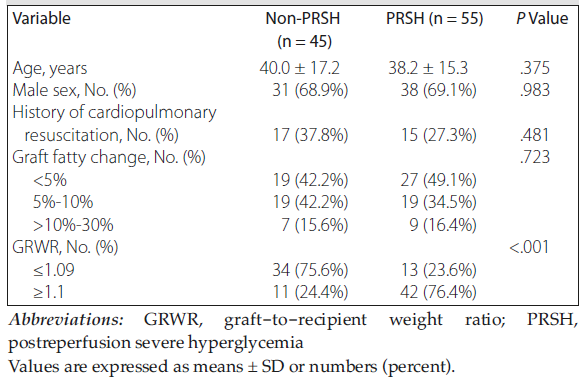 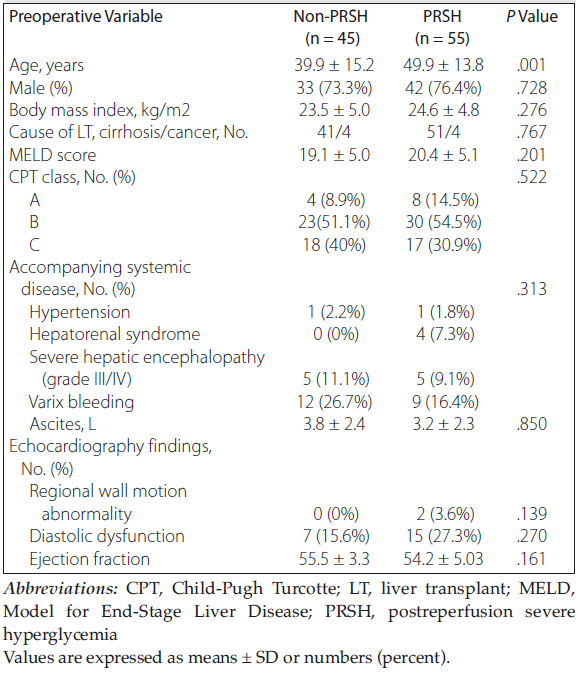 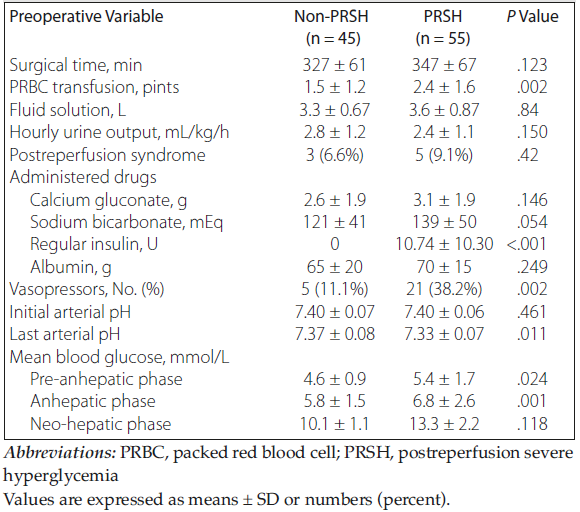 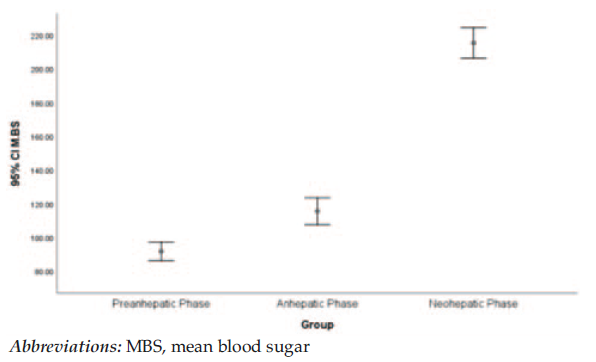