Traditionally, much of the academic and clinical attention has been directed to posttransplant graft function, which plays a secondary role in the management of cardiovascular disease risk factors. Death of a transplant patient with a functioning graft still constitutes the foremost cause of renal allograft loss.6 Thus, cardiovascular disease also emerges as an important reason for graft loss. Considering the shortages of donated kidneys, determining and working to protect patients against cardiovascular risk factors can provide doubled benefits, enabling survival of kidney transplant recipients and functioning kidneys.

Despite the undeniable impact of cardiovascular disease in survival of kidney transplant recipients, the predictive role of MHR has not yet been evaluated in these patients. Given that mortality rates are higher in DDKT recipients than in recipients of living related kidney donors, we aimed to evaluate the ability of MHR to predict all-cause mortality in DDKT recipients.

This was a retrospective observational study in which 325 patients who underwent DDKT between January 2006 and November 2018 at Uludag University School of Medicine Department of Urology, in Bursa, Turkey, were analyzed. The primary aim of the study was to evaluate the independent predictors of all-cause mortality among the DDKT patients, including MHR. The last visit was taken as December 2019 for evaluation of survival status of study participants. The study protocol was approved by the Uludag University Clinical Research Ethics Committee (2020-21/711.25.2020).

Relevant data were retrieved from a prospectively maintained transplant database of the transplant unit. We collected age, sex, body mass index, modality of and time in dialysis before transplant, comorbid conditions, type of primary kidney disease, the number of HLA mismatches, type of induction regimen, occurrence of delayed graft function, graft function at several time points posttransplant, graft rejection episodes, survival status, and level of the latest renal function. With regard to data of deceased donors, we obtained information on age, sex, body mass index, chronic medical conditions, smoking status, use of inotropic agents, and cause of brain death.

Monocyte-to-HDL cholesterol ratio was calculated as the peripheral blood monocyte count divided by blood HDL cholesterol concentration. For this calculation, the most recent values before DDKT were used.

Delayed graft function was defined as kidney dysfunction that required dialysis after the first week posttransplant.11

To check the normality assumptions of the data, the Shapiro-Wilk test and Q-Q plots were used. Normally distributed variables are presented as means ± standard deviations, whereas nonnormally distributed variables are given as medians and interquartile ranges (IQR). For comparisons between 2 groups, the independent sample t test and the Mann-Whitney U test were used according to the distribution of variables. Categorical variables are presented as numbers and percentages. The chi-square test and the Fisher exact test were used to compare the categorical variables between 2 groups.

We divided the study cohort according to the median value of MHR. Kaplan-Meier curves were constructed to illustrate differences in survival between patients with MHR below and above the median value. The log-rank test was used to compare survival times of the groups.

To determine independent predictors of all-cause mortality of the DDKT recipients, we conducted univariate and multivariate Cox proportional hazards analyses. We calculated hazard ratios, which are presented along with 95% confidence intervals. Variables with P < .05 in univariate analysis were included in the multivariate analysis. Clinical judgment was also used when selecting variables for the regression model. Finally, age, delayed graft function, duration of dialysis, cold ischemia time, and MHR groups (MHR above median vs MHR below median) were included in the multivariate model. We used the IBM SPSS version 25.0 software package to analyze study data. P < .05 was accepted as statistically significant.

Initially, we obtained data of 396 patients who had undergone DDKT at our institution. Seventy-one patients were excluded because they lacked MHR values or had been lost to follow-up. In total, 325 DDKT recipients (43.1% females; mean age of 44.5 ± 11.2 years; range, 18-75 years) were included in the study. The most common chronic medical condition among the recipients was hypertension (42.5%). Of all recipients, 68.9% underwent hemodialysis, whereas 15% received transplants while on peritoneal dialysis. The median duration of dialysis was 8 years (IQR, 5-11 y). The median number of HLA antigen matches was 2 (IQR, 2-3). The median value of MHR was 14.0 (IQR, 9.94-21.03). Baseline clinical and demographic features and laboratory values are shown in Table 1.

The mean age of deceased donors was 46.1 ± 16.5 years. Males comprised a majority of the donors (64.9%). One-fourth of all donors had hypertension. Clinical and demographic features and laboratory values of deceased donors are shown in Table 2.

Kidney transplant recipients with higher MHR were significantly older than patients with lower MHR (45.3 ± 10.5 vs 43.7 ± 11.9 y; P = .007). Distribution of males versus females also showed a significant difference in that there were more male recipients with MHR above the median value. There was no difference between the groups in terms of chronic comorbid conditions. Number of matched HLA antigens and rates of delayed graft function were similar between groups. Table 3 summarizes the comparison of clinical and laboratory values between the groups.

The total median observation time was 227 weeks (range, 115-345 weeks). Duration of posttransplant observation period was calculated based on time to death or time to last follow-up visit. During the entire follow-up period, 67 patients (20.6%) died. Of these deaths, 20 (12.3%) occurred in recipients with MHR below median value, whereas 47 deaths (29%) occurred in recipients with MHR above the median (P < .001) (Table 3). We constructed Kaplan-Meier curves to demonstrate the survival difference between the groups (Figure 1). Survival difference was significant when compared with the log-rank test (P = .001) (Table 4).

The salient findings of this study were as follows: (1) DDKT recipients with MHR above median value had a higher mortality rate than recipients with MHR below the median; and (2) level of MHR group (MHR above median vs MHR below median) emerged as an independent predictor of all-cause mortality in DDKT recipients, in addition to delayed graft function, duration of dialysis, and cold ischemia time. To the best of our knowledge, this is the first study that reported the predictive ability of MHR for mortality in renal transplant recipients.

It is well-established that monocytes and their tissue-resident offspring, macrophages, are causally involved in cardiovascular disease initiation and progression. These cells also play a major role in the development of unstable atherosclerotic plaques,12 which itself is a chronic inflammatory lesion. Allen and colleagues speculated that circulating monocyte-platelet aggregates might be one of the missing links between the atherothrombosis and monocytic inflammation.13 The authors concluded that monocyte-platelet aggregates were strong surrogate markers of platelet activity and were elevated in patients with cardiovascular disease. The present study showed that median monocyte count was significantly higher and median HDL cholesterol concentration was significantly lower in deceased DDKT recipients compared with DDKT recipients who survived.

The dyslipidemia in chronic kidney disease has a specific pattern, in which serum triglycerides are elevated and HDL cholesterol level is reduced.16 In addition, chronic kidney disease is now considered a chronic inflammatory disease.17 This prevalent dyslipi­demia and heightened inflammatory milieu to some extent account for the increased atherosclerotic burden and high cardiovascular mortality observed in this patient population. Chronic kidney disease is also unique in terms of monocyte alterations. Several studies have reported that patients with chronic kidney disease had elevated numbers of interme­diate and CD40+ monocytes corresponding to severity of kidney dysfunction.18,19 Moreover, periph­eral blood monocyte counts were found to be inde­pendently predictive of adverse major cardiovascular events.20 In another study, monocyte chemoat­tractant protein 1, a marker reflecting inflammation and monocyte recruitment to atherosclerotic plaques, was found to be independently associated with cardio­vascular events and death.21

Kanbay and colleagues, in the only study that investigated the role of MHR in patients with chronic kidney disease, found that MHR increased as the glomerular filtration rate decreased. In addition, both fatal and nonfatal major adverse cardiovascular events were more common in patients who had higher MHR compared with patients who had lower MHR values.8 Unfortunately, no study to date has evaluated the values and predictive ability of MHR in kidney transplant recipients.

Vereyken and associates found that the number of proinflammatory (intermediate) monocytes expressing CD16+ and CD14++ were increased at the time of transplant, and this was maintained for at least 6 months after transplant.22 Rogacev and associates found that steroid intake was associated with higher total counts of CD14++-CD16+ monocytes in kidney transplant recipients.23 In another study, van den Bosch and colleagues demonstrated that kidney transplant recipients who developed acute rejection had significantly higher numbers of CD16+ monocyte counts relative to kidney transplant recipients who did not experience rejection and control subjects. Interestingly, a higher number of CD16+ monocytes before transplant was significantly associated with a higher risk of acute rejection episodes.24 Combining experimental and clinical data, we can safely say that monocytes, along with macrophages into which they are transformed, play pivotal roles in acute rejection episodes.25

Some limitations of the present study deserve mention. First, we assessed all-cause mortality instead of cardiovascular mortality because we lacked the causes of death in all study participants with sufficient certainty. Because MHR is principally related to cardiovascular mortality, we assumed that the association and hazard ratio for mortality would have been higher in that case. Second, we did not account for long-term drug use, including maintenance immunosuppressive drugs, which may have affected survival.

From the 1Department of Urology, the 2Department of Nephrology, and the 3Transplantation Center, Faculty of Medicine, Uludag University, Bursa, Turkey
Acknowledgements: The authors have not received any funding or grants in support of the presented research or for the preparation of this work and have no declarations of potential conflicts of interest.
Corresponding author: Mehmet Cagatay Cicek, Uludag University, Faculty of Medicine, Department of Urology, Nilufer, Bursa, Turkey
Phone: +905306452602
E-mail: cgtycicek@gmail.com 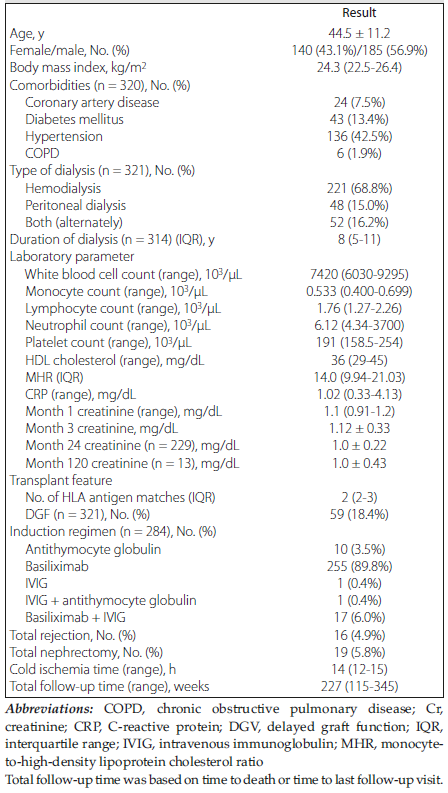 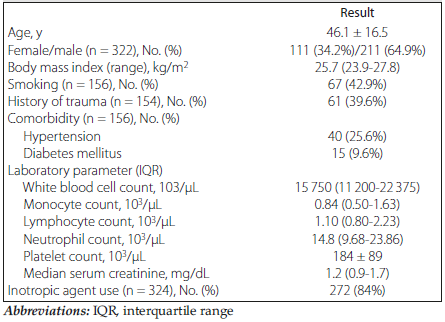 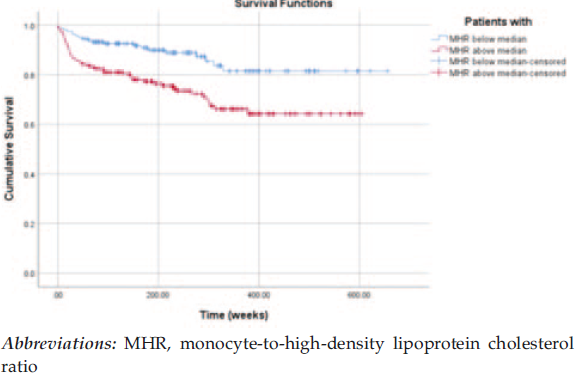 Figure 1. Kaplan-Meier Survival Curve of Patients With Monocyte-to-High- Density Lipoprotein Cholesterol Ratio Above Versus Below Median 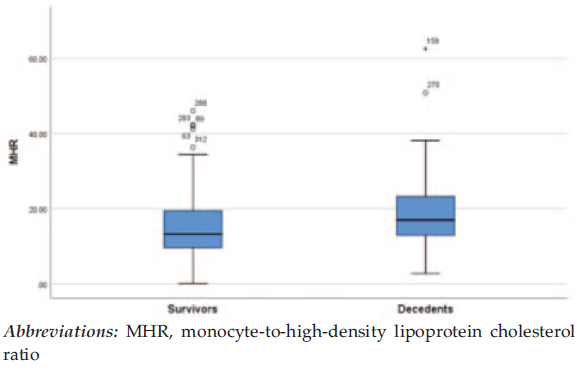 Table 4. Log-Rank Test Showing Differences in Survival Times Between Patients with Monocyte-to-High-Density Lipoprotein Cholesterol Ratio Below and Above Median Value