Pure red cell aplasia (PRCA) is a relatively rare disease characterized by selective suppression of erythroid precursors in the bone marrow. Pure red cell aplasia is clinically manifested by normocytic, normochromic anemia, low red blood cell (RBC) counts, normal leukocyte and thrombocyte counts, and lack of erythroblasts in the bone marrow. This disease can also develop secondary to lymphoma, thymoma, viral infection, malignancy, rheumatoid disease, and drug side effects. Some medications, such as diphenylhydantoin, azathioprine, and isoniazid, have been suspected to cause PRCA.1

Tacrolimus, a potent immunosuppressant, is widely used in organ transplant, but its hematologic toxicity has not been adequately evaluated. There have been previous reports of PRCA due to tacrolimus administration in organ transplant recipients.2-5 Here, we report a case of reversible PRCA that developed during tacrolimus therapy following living-donor liver transplant.

Written informed consent had been obtained from the parents of the patient. The patient, a 1-year-old girl diagnosed with progressive familial intrahepatic cholestasis type II, underwent living-donor liver transplant when she was 10 months old. The blood typing was identical, and recovery was uneventful. She was started on 3 immunosuppressants post­transplant: tacrolimus (0.1 mg/kg/day twice daily), mycophenolate mofetil, and prednisolone (0.2 mg/kg/day). Her blood tacrolimus levels remained in the normal range (5-10 ng/mL) throughout treatment.

One year after transplant, she developed severe progressive anemia. Her hemoglobin concentration was extremely low (5.4 g/dL), but leukocyte and platelet counts were normal. She was transfused 1 unit of packed RBCs. After a few days, she was admitted to our hospital for diagnostic investigation and treatment. Mycophenolate mofetil, acyclovir, and sulfamethoxazole trimethoprim were stopped because they were suspected to have induced the anemia. Her clinical course during hospitalization is shown in Figure 1.

On admission, physical examination showed no remarkable abnormal changes except pallor and diarrhea. Her hemoglobin concentration was 6.2 g/dL, reticulocyte count was 2.6 × 103/μL, and total leukocyte and platelet counts were 5100/μL and 4.2 × 105/μL, respectively. Although the haptoglobin level was < 2 mg/dL, a peripheral blood smear examination did not indicate hemolysis, and Coombs test was negative. Erythropoietin levels were high at 140 mIU/mL. Serum iron, vitamin B12, and folic acid levels were within reference ranges, whereas ferritin levels were mildly elevated (226 μg/dL). Parvovirus B19 DNA, Epstein-Barr virus, and cytomegalovirus tests were negative. Fecal analysis and urinalysis showed normal findings. Antinuclear antibodies and rheumatoid factor were negative. Chest magnetic resonance imaging did not show any tumors such as thymoma or lymphoma.

At 1 month after admission, her anemia did not improve, and she needed 2 units of packed RBC transfusions every few weeks to maintain a hemoglobin concentration of > 8.0 mg/dL. Because we suspected that the anemia was caused by a bone marrow function disorder, a bone marrow biopsy was performed 1.5 months after hospital admission.

The bone marrow biopsy revealed severe hypoplasia of the erythroblasts with no abnormality of other myelocytes. The findings were suggestive of PRCA. We suspected that tacrolimus caused PRCA based on similar previous cases of TAC-associated PRCA.2-5 Accordingly, tacrolimus was switched to cyclosporine after this diagnosis.

One week after the switch to cyclosporine, RBC counts, reticulocytes, and hemoglobin concentration increased. She was discharged after a 2-month hospitalization.

Pure red cell aplasia is a condition in which erythroid precursors in the bone marrow are selectively suppressed but normal myeloid and megakaryocyte maturation results are displayed. Pure red cell aplasia can be inherited as a primary hematologic disorder or can develop secondary to lymphoma, viral infections, malignancy, rheumatoid disease, and drug side effects. Diphenylhydantoin, azathioprine, and isoniazid have been suspected to cause PRCA.1 Tacrolimus-induced PRCA has also been shown in patients after organ transplant.

Tacrolimus is widely used in organ transplant due to its potent immunosuppressant effect. Tacrolimus can bind to FK506-binding protein, which is expressed on the surface of CD4-positive T cells and mediates inhibition of the gene transcription for interleukin 2 and other transcription factors essential to early T-cell activation. Although tacrolimus is considered to have no significant potential for myelosuppression, tacrolimus-related PRCA has been reported.

A MEDLINE search for articles in English published between 1990 and 2017 yielded only 7 cases of tacrolimus-induced PRCA in 4 publications.2-5 The main characteristics of the 7 cases are listed in Table 1. Two of the 7 patients were children, and 2 were male. All patients were administered prednisolone with tacrolimus, and tacrolimus was sequentially switched to cyclosporine after PRCA diagnosis. All patients showed complete recovery of hemoglobin levels within a few weeks after the switch. There were no noted similarities with regard to tacrolimus dosing period, age of PRCA onset, and concomitant use of medications other than prednisolone among the 7 patients. Tacrolimus concentration was checked in 3 patients, with 2 showing levels > 10 ng/mL.

The mechanism by which tacrolimus causes PRCA is unclear, and some cases could not be treated with erythropoietin and granulocyte-colony stimulating factor. In vitro studies showed that tacrolimus concentrations of > 10 ng/mL in 24 hours can suppress burst-forming unit-erythroid activity.6 These are the earliest committed erythroid progenitors and are defined based on their capability to produce large colonies of methylcellulose-based erythroid cells. The burst-forming unit-erythroid population is suppressed by transforming growth factor-beta (TGF-β).7,8 Some reports have indicated that tacrolimus stimulates TGF-β1 hyperexpression in mammalian cells in a dose-dependent manner.9,10 Increased TGF-β signaling inhibits hematopoiesis at the stem cell level and controls RBC differentiation. Thus, PRCA may be caused by excessive TGF-β production induced by high tacrolimus concentrations. In our patient, the tacrolimus blood level was within normal range; however, it has been reported that tacrolimus blood level may not be a reliable indicator of systemic tacrolimus exposure.11

A periodic blood test that includes blood imaging should be conducted for patients treated with tacrolimus. In patients who develop PRCA during tacrolimus treatment following living-donor liver transplant, clinicians should consider switching from tacrolimus to another immunosuppressant.

From the Department of Pediatrics, Kumamoto University, Kumamoto, Japan
Acknowledgements: The authors have no sources of funding for this study and have no conflicts of interest to declare.
Corresponding author: Rieko Sakamoto, 1-1-1 Honjo Chuo-ku, Kumamoto-shi, Kumamoto-ken, 860-0811 Japan
Phone: +81 96 373 5191
E-mail: hrieko48@kuh.kumamoto-u.ac.jp 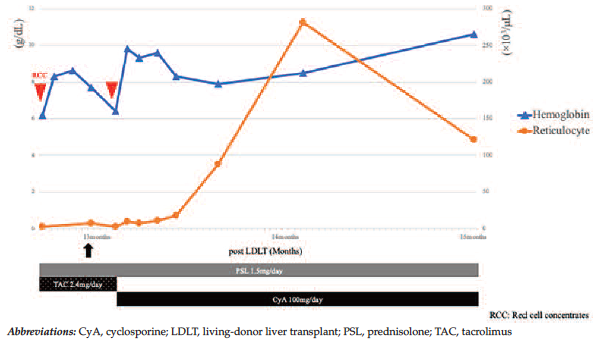