Materials and Methods: We enrolled 151 deceased-donor kidney transplant recipients, whom we divided into 2 groups: 101 nonrejection recipients and 50 recipients with acute allograft rejection. We collected 3 mL of blood (treated with ethylenediaminetetraacetic acid) from each patient. Ribonucleic acid extraction and complementary DNA synthesis were conducted for all samples, and the constructed complementary DNAs were used for real-time polymerase chain reaction analysis.

Results: We measured gene expression levels of Toll-like receptors 2 and 4 in renal transplant recipients with acute allograft rejection and in recipients who did not experience acute renal allograft rejection, and the results showed that messenger RNA expression levels for both Toll-like receptors 2 and 4 were significantly increased in the acute rejection group compared with the nonrejection group.

Conclusions: Toll-like receptors 4 and 2 could increase the risk of acute rejection after renal transplant and could be defined as a risk factor for rejection. Further studies are recommended.

Kidney transplant is the current standard treatment for most patients with end-stage renal disease; unfortunately, adaptive and innate immune responses to graft alloantigens are the highest threats to graft survival.1,2 Acute graft rejection is a phenomenon once thought to be initiated by the adaptive immune system, but further studies revealed that the innate immune system is critical in initiating acute inflammatory responses during organ transplant.3

Toll-like receptors are expressed in several types of immune cells, at various levels.6,7 Toll-like receptors are conserved molecules that can cause induction of innate immune responses, which may lead to antigen-specific adaptive immunity.8 At present, 13 types of human TLRs have been detected; among them, TLR2 and TLR4 are well known for being activated during several events, including the transplant process.9

Toll-like receptor-mediated signals are known to play a crucial role in various organs with regard to the many facets of transplantation biology, including rejection and tolerance, ischemia-reperfusion injury, and infections after transplant.10 Toll-like receptors are expressed in a wide range of kidney cells (14 types) and can induce innate immune function by detecting motifs of endogenous and exogenous molecules during cellular injuries.11 The TLR stimulation by exogenous and endogenous ligands induces the release of inflammatory cytokines and chemokines, which is a phenomenon associated with allograft rejection.3

The messenger RNA (mRNA) of TLR2 in the murine kidney is often expressed in the renal tubular and Bowman capsule epithelial cells.8 Toll-like receptor 2 is a transmembrane protein, the activation of which starts a signaling pathway composed of adaptor proteins such as myeloid differentiation primary response gene 88 (MyD88) and MyD88 adapter-like (Mal; also known as TIRAP) and finally culminates in the induction of proinflammatory cytokines.12

Toll-like receptor 4 is one of the first molecules that, once activated, leads to quick production of cytokines and interferes in inflammation during cellular damage.13,14 This molecule is strongly expressed in leukocytes and also in organs such as the kidney.15,16 Furthermore, the role of TLR4 has previously been recognized in ischemia-reperfusion injury, kidney repair, renal injury progression, and renal fibrosis.17,18 Toll-like receptors such as TLR2 and TLR4 are critical factors of innate immunity, which start rejection processes and could be important to increase long-term survival after transplant.19,20 In this study, we evaluated the mRNA expression levels of TLR2 and TLR4 in recipients with acute renal allograft rejection versus nonrejection recipients.

Patients
The present study was performed from 2012 to 2014 for patients admitted to the kidney transplant ward of Namazi Hospital, Shiraz, Iran. We collected 3 mL of blood (treated with ethylenediaminetetraacetic acid [EDTA]) from 151 kidney transplant recipients. The patients were enrolled in the study according to the following inclusion criteria: the recipients had received a kidney transplant just 1 time from a deceased donor, and the recipients were treated with specific immunosuppressive drug regimens. These specific immunosuppressive drugs were calcineurin inhibitors and were administered to all patients in each study group. The exclusion criteria were retransplant or combined transplant. Also, the samples of transplant recipients who were deceased before completing the sample collection were excluded. Moreover, transplant recipients with viral infections such as cytomegalovirus and polyoma BK virus were excluded from the project.

The remaining transplant recipients (151) were divided into 2 groups. The first group, without acute rejection (non-AR), consisted of 101 patients who had not experienced any episodes of AR during the study period; the second group was composed of 50 patients who had experienced AR during the first week after transplant. Expert pathologists, according to Banff criteria, certified the AR state of the second group after analysis of the patients’ kidney biopsies.21 The present study was conducted according to the Declaration of Helsinki and was approved by the Ethics Committee of Shiraz University of Medical Sciences, and the patients were informed and signed the consent form before participating in this study. According to the rules of the transplantation ward of Namazi Hospital, all transplant recipients received organs from deceased donors. Human leukocyte antigen typing and ABO blood compatibility were performed for all kidney transplant patients.

Ribonucleic acid isolation and quantitative real-time polymerase chain reaction
To evaluate gene expression of TLR2 and TLR4 in cases of renal transplant rejection, quantitative real-time polymerase chain reaction (qRT-PCR) was performed. For this purpose, the total RNA was extracted using the RNX-Plus solution (CinnaGen, Tehran, Iran) according to the manufacturer’s protocol, and the concentration of extracted RNA was then quantified using a NanoDrop Lite Spectrophotometer (Thermo Fisher Scientific). The quality of extracted RNA was considered by 1% agarose gel electrophoresis, as well. Subsequently, the complementary DNA (cDNA) was synthesized. We used 1 μg of extracted RNA for cDNA synthesis, by adding random hexamer (1 μL, 0.2 μg) and deoxynucleoside triphosphates (1 μL, 10 mM); the mix was incubated at 65°C for 7 minutes and then put on ice for 2 minutes. In the next step, Moloney murine leukemia virus reverse transcriptase (RT) enzyme (1 μL, 200 U; Vivantis, Selangor, Malaysia), RT buffer (2 μL, 10×), and ribonuclease inhibitor (1.3 μL, 60 U) were mixed and added to the first mix. The new whole mix was incubated for 90 minutes at 45°C and then 5 minutes at 85°C. All RNA samples were treated with deoxyribonuclease (DNase; Thermo Fisher Scientific) before changing to cDNA. For this reason, 1 μL for each μg of RNA was treated with DNase.

The AlleleID 6 software (Premier Biosoft International) was used to design the primers for amplification of the genes of interest (TLR2 and 4 genes). Subsequently, the primer specificity was confirmed by Primer-BLAST (https://www.ncbi. nlm.nih.gov/tools/primer-blast) and In-Silico PCR (https://genome.ucsc.edu/cgi-bin/hgPcr). The beta-actin gene was used as the housekeeping gene, as it is known to have only minor fluctuations versus the comparatively higher fluctuations of other genes. The amplification mixes and primer sequences are summarized in Tables 1 and 2.

To check the specificity of an amplification reaction, the melting-curve analysis was evaluated. The results for the target genes were measured as fluorescence signal intensity and normalized to the internal standard gene, beta-actin. The program for thermocycling as follows: 1 cycle at 95°C for 2 min, followed by 40 cycles at 95°C for 30 seconds, and then 1 cycle at 65°C for 20 seconds following melting-curve analysis to confirm the specificity of the reaction.

Statistical analyses
The statistical differences in the expression levels of genes and the fold changes in patients and controls were compared via the Livak methods (2-∆∆CT). Statistical analyses were performed through SPSS software (version 22.0; IBM Corporation, Armonk, NY, USA), using parametric and nonparametric analyses. P < .05 was considered significant.

Recent studies have emphasized the importance of the immune system in transplant rejection.19 Toll-like receptors express a strong affinity for infection and tissue injury-associated molecules. Toll-like receptors are expressed throughout the animal and plant kingdoms, which has generated a powerful interest in defining the characteristics of TLRs in health and disease.22,23

The stimulation TLRs with ligands, except for TLR3, can activate the interferon regulatory factor 3 and MyD88 pathways. Activation MyD88-dependent TLRs signaling pathways may cause the activation of the transcription factors nuclear factor-kappaB and activator protein 1. Finally, these proteins lead to the induction of innate immune responses by producing inflammatory cytokines, including interleukin-6, tumor necrosis factor, and interleukin-12. MyD88 is an adapter protein that facilitates signal transduction by TLRs.24 Furthermore, a recent study by Pasare and Medzhitov confirmed the manner in which TLR activation blocked the suppressive effects of regulatory T cells, enabling pathogen-specific immune responses.25

Hoffmann and colleagues completed the first study to show the time course of TLR2 expression after kidney transplant in an experimental rat model. The results of that study were then compared with TLR2 expression in human renal allograft biopsies.3 The new findings of Hoffmann and colleagues suggest a role for TLR2 in the early time course of AR. The cellular localization of TLR2 was analyzed by immunohistochemistry, and positive staining data in uninjured renal tissue were detected.16,26 Supplemental investigation of TLR2 induction with renal function confirmed that higher TLR2 mRNA levels were related to higher serum creatinine levels under standardized experimental conditions. Also, TLR2 was induced in both the kidney and urine of rats that had received renal transplants. Moreover, this excretion was related to the severity of allograft rejection and renal function. Toll-like receptor 2 could initiate mechanisms related to the induction and severity of AR episodes. Furthermore, TLR2 activation of innate immunity in kidney transplants may contribute to acute allograft rejection.3 Another study showed that TLR2 antisense oligonucleotide treatment in an experimental ischemia-reperfusion model in mice reduced renal dysfunction after ischemia-reperfusion injury compared with nonsense oligonucleotide treatment.8 TLR2 targeting in order to abrogate inflammation in diabetes resulted in reduced complications, including nephropathy.27 Furthermore, it seems that TLR2 is capable of monitoring cellular injury that is the result of ischemic stress and that TLR2 is crucial for the initiation of a proinflammatory immune response.8

The importance of TLR4 activation in allograft damage in human kidney transplants has not been identified, but animal model studies have shown that TLR4 signaling is connected to kidney injury induced by ischemia and reperfusion; also, in vitro studies revealed that renal tubular epithelial cells can synchronize an immune response to injuries in a TLR4-dependent manner. Studies suggest that TLR4-selective targeting may be useful for the development of therapeutic tools to avoid injury, ie, more so than targeting the intracellular pathways used by TLR4. Toll-like receptor 4 is recognized as a cellular sentinel for acute renal damage that later controls the orientation of an innate immune response.17,18 For instance, a study in 2007 suggested that TLR4 induction in cells is involved in cell death and graft rejection after transplant.4 Kruger and colleagues showed that TLR4 was permanently expressed within all kidney donors; nonetheless, it was significantly higher in deceased donor organs compared with living donor organs. They proposed that targeting TLR4 signaling may have value in preventing or treating acute kidney injury after transplant.28 Also, TLR4 attenuates tubular damage but promotes renal fibrosis by controlling the vulnerability of the renal cells to transforming growth factor beta. Together, the results of the present study suggest that TLR4 signaling may be a therapeutic target for the inhibition of renal fibrosis.18 Other studies also proposed that inhibition of TLR2 and TLR4 might be potential therapeutic targets to control tumor progression and ischemia-reperfusion results.29,30

It is likely that renal injuries initiate multiple pathophysiological mechanisms that culminate in the expression of survival genes, proinflammatory cytokines, and chemokines, which ultimately lead to activation of inflammatory cells. It is known that TLR2 and TLR4 have prominent constitutive protein expression through the kidney tissue, and the profound protection gained by blockade of this protein expression not only shows these receptors to be a chief regulator of renal injury but also suggests a significant role in normal renal physiology. Toll-like receptors 2 and 4 were expressed more in the AR group compared with the non-AR group. Therefore, TLR2 and TLR4 could be defined as risk markers for the induction of the innate immune system to promote allograft rejection.

Table 2. Primer Sequence for Amplification of Genes of Interest 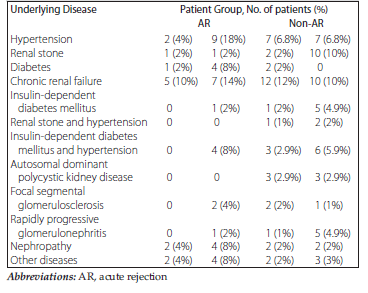