Materials and Methods: We performed a retrospective analysis of a database containing 29 patients with immunoglobulin A nephropathy and 646 other recipients who underwent transplant and were induced with alemtuzumab and steroid minimization treatment between March 2006 and May 2015. A matched cohort generated using propensity scoring was also analyzed.

Conclusions: Recurrence rate of immunoglobulin A nephropathy in those induced with alemtuzumab in the setting of steroid minimization is similar to previously reported rates. Although recipients with immunoglobulin A nephropathy had significantly higher 1-year rejection rate, no other differences in graft or patient survival were shown versus recipients without this condition.

Immunoglobulin A nephropathy (IgAN) is the most common primary glomerulonephritis in adults.1 End-stage renal disease occurs in 50% of IgAN patients after 20 to 30 years.2 Kidney transplant is the treatment of choice and is associated with improved quality of life, better patient survival, and lower health care costs.3-5 Unfortunately, IgAN recurrence may result in chronic graft dysfunction and the subsequent need for retransplant. The recurrence rate of IgAN ranges from 13% to 50%, and graft loss occurs in up to 16%.6 The risk of recurrence is increased with living-related donation7 and is associated with younger recipient age.8

Recurrence risk is reduced in the presence of long-term steroid therapy.9 However, steroid withdrawal and steroid minimization, especially in the setting of induction immunosuppression, have recently become more popular among transplant practi­tioners given the adverse effects of steroid therapy.

Alemtuzumab is an induction agent utilized in the setting of steroid minimization. It is a humanized monoclonal antibody that targets the CD52 glyco­protein and results in lymphocyte depletion.10 The use of alemtuzumab induction in the setting of steroid minimization for kidney transplant recipients with IgAN has not been well demonstrated. Therefore, we evaluated the long-term patient and graft outcomes of these individuals.

All recipients were negative cross-matches for both T and B cells. All cases of acute rejection and IgAN recurrence were biopsy-proven. Biopsies were only performed in the presence of allograft dysfunction.

Statistical analyses
Continuous variables such as age, length of dialysis, cold ischemia time, and kidney donor profile index were presented in medians and were compared using t tests or the Mann-Whitney U test when appropriate. Categorical variables, including sex, ethnicity, education level, delayed graft function, and early rejection, were presented in terms of percentage of the total numbers within the group. These results were compared with the Pearson chi-square or Fisher exact test. Survival curves were generated using the life table method, with statistical comparisons computed with the log-rank method. Multivariate survival analysis was done using Cox regression analysis with multivariate factors selected from univariate results and with patient ethnicity included for comparison. Type I error level was set at .05. All statistical analyses were conducted using IBM SPSS version 23 (IBM Corp., Armonk, NY, USA). Additionally, a matched cohort analysis was generated using propensity scoring for the major statistically significant demographic differences using regression.

Rejection results
The rate of graft loss due to rejection did not differ significantly between IgAN and controls. However, IgAN recipients were more likely to experience all-cause graft loss (P = .043). Rejection outcomes are listed in Table 6. The IgAN group had significantly more eosinophils on biopsy than the control group (22.2% vs 5.6%; P < .05). Other cell types did not vary with any significance. There were no significant differences in the type of rejection (acute cellular vs antibody-mediated) or in Banff score between the IgAN and control groups (P = .298 and P = .285, respectively). Regarding those who experienced recurrence, there were no significant differences in cell type (P = .308), type of rejection (P = .464), or Banff score (P = .624) compared with those who did not experience recurrence.

Immunoglobulin A nephropathy is the most common cause of glomerulonephritis worldwide. Kidney transplant is associated with superior outcomes compared with chronic dialysis. However, the recurrence of IgAN in renal allograft recipients remains a substantial complication, frequently leading to graft failure and return to wait list.

In the setting of alemtuzumab induction and steroid minimization, we demonstrated no significant differences in death-censored graft survival between recipients with IgAN and the control group at 1, 3, and 5 years. Our initial analysis demonstrated an elevated rate of rejection at 1 year in the IgAN group. However, our matched cohort analysis did not yield statistically significant differences in either death-censored graft survival or rejection between patients with a kidney transplant due to IgAN matched against patients who underwent kidney transplant for other reasons.

It is important to note that our recurrence rate could be falsely low given that we performed no screening biopsies for recurrence. We performed biopsies only in the presence of graft dysfunction, which was defined as elevated creatinine and proteinuria. However, Odum and associates demonstrated that more than one-half of their patients who experienced biopsy-proven recurrence had stable renal function and almost 20% had negative urinalysis results.17 Furthermore, Ortiz and associates found clinical signs such as hematuria were absent in 64% of patients with biopsy-proven disease recurrence.18 Given that all of our patients who experienced recurrence ultimately lost their graft, it is reasonable to conclude that our current biopsy protocol needs to be adjusted to identify recurrence at an earlier stage and to better manage it.

Although our recurrence rate was relatively similar to previously reported rates in the literature, few studies have reported on outcomes in individuals with IgAN who undergo kidney transplant with alemtuzumab induction therapy. Pascual and associates demonstrated that alemtuzumab was not associated with an increased rate of recurrence of glomerular disease compared with interleukin 2 receptor antagonists or antithymocyte globulin.19 Furthermore, immunodepletion is potentially protective and associated with reduced recurrence in IgAN patients, although the mechanism is still unknown.20

There has been controversy regarding the role of steroid minimization protocols in the treatment of kidney transplant recipients with IgAN. Traditionally, steroids have been the preferred treatment for patients with IgAN and an important part of the immuno­suppressive protocol after kidney transplant. Recently, steroid-free and steroid minimization protocols were developed to avoid many of the adverse effects of long-term steroid use. However, steroid minimization protocols are associated with increased rates of recurrence in IgAN transplant recipients.8,21 For example, Kukla and associates21 observed a recurrence rate of 22% in their early steroid withdrawal group compared with 5.2% in their steroid continuation group (P = .02). Similarly, Von Visger and associates demonstrated a signi­ficantly higher risk of recurrence with steroid withdrawal protocols (hazards ratio of 8.59; 95% confidence interval, 3.03-24.38; P < .001).22 In a large, retrospective review of the UNOS/OPTN database, Leeaphorn and associates showed that steroid continuation was associated with a significantly lower rate of graft loss due to recurrence.23

It is important to mention that, in 2016, after analyzing our outcome data and noting a greater than 20% rejection rate, we have since altered our protocol to include maintenance steroids for our IgAN patients, African American patients, and other high-risk groups.

The strengths of our present analysis include a relatively long follow-up period and a consistent immunosuppressive protocol. Weaknesses include a small sample size of patients with IgAN, a lack of comparison to other induction immunosuppression drugs, and a lack of comparison between a steroid minimization and a steroid continuation group. However, the literature on IgAN is partly based on single-center studies. 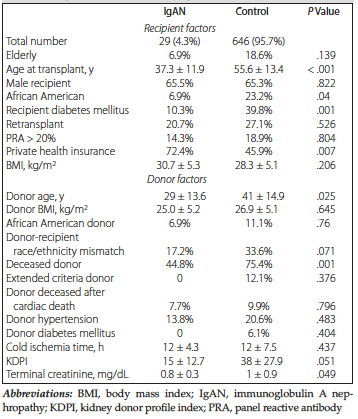 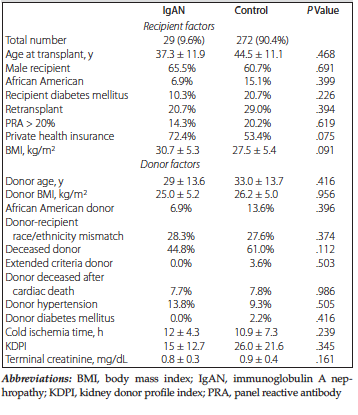 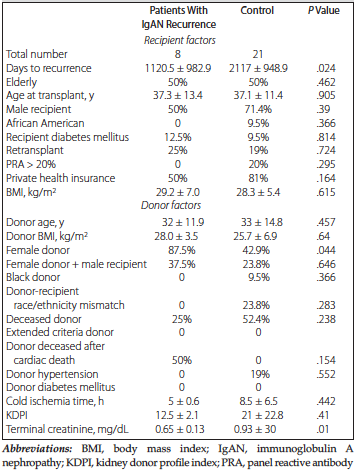