Generalized lymphadenopathy after organ transplant is a concerning finding, often indicating the devel-opment of lymphoma. We describe a 52-year-old liver transplant recipient who had clinical symptoms and imaging concerning for posttransplant lympho-proliferative disease. However, histologic evaluation of a lymph node biopsy revealed that the patient actually had a much rarer but relatively benign condition, Kikuchi-Fujimoto disease (histiocytic necro-tizing lymphadenitis). We discuss the epidemiology, clinical symptoms, diagnosis, histologic features, and treatment of this uncommon mimic of posttransplant lymphoproliferative disease.

A 52-year-old Asian female with a history of end-stage liver disease from primary biliary cirrhosis presented 6 months after an orthotopic liver transplant with complaints of recurrent fevers up to 104°F. The fevers first developed 5 months after transplant and initially occurred every 3 days, accompanied by fatigue, body aches, anorexia, and an erythematous rash on her chest, anterior shins, and bilateral dorsal hands. By 6 months post-transplant, the fevers had become a daily occurrence. She presented to the transplant clinic febrile and mildly hypotensive, with a systolic blood pressure in the 70s, resulting in her admission to the intensive care unit. Her hypotension resolved with fluid resuscitation. Her initial workup was significant for normal liver function tests, a normal white blood cell count (5.9 × 109/L), negative blood and urine cultures, negative chest radiography for consolidations, abdominal magnetic resonance imaging that showed a 1.6-cm lymph node versus splenule in the splenic hilum, negative respiratory virus panel, and undetectable cytomegalovirus and Epstein-Barr viral loads by polymerase chain reaction. Because of her recurrent fevers and concern for PTLD, she underwent a positron emission tomography-computed tomography scan, which detected fluorodeoxyglucose avid lymphadenopathy in the left supraclavicular, axillary, abdominal, retrope-ritoneal, and pelvic regions ( Figure 1A). Physical examination suggested that her left supraclavicular nodal conglomerate was most amenable for tissue sampling. She therefore underwent an open excisional lymph node biopsy.

Histologic examination showed patchy para-cortical foci of necrosis that were devoid of neutrophils and eosinophils (Figure 1B). Immuno-histochemical stains demonstrated CD163, myeloperoxidase-positive histiocytes intermixed with CD123-positive plasmacytoid dendritic cells associated with necrotic foci. CD20 and CD3 immunostains and flow cytometric immunophenotyping failed to support a diagnosis of lymphoma. Staining for acid fast bacilli was negative. The lymph node pathology was thought to be most consistent with a diagnosis of Kikuchi-Fujimoto lymphadenitis. Systemic lupus erythematosus could have similar histologic findings, but this diagnosis was not supported by clinical criteria. After rheumatology consultation, treatment with 30 mg prednisone twice daily and hydroxychloroquine was initiated. The patient had a prompt resolution of her fevers, and resolution of her lymphadenopathy was shown in a subsequent computed tomography scan 3 weeks after initiation of therapy. Prednisone therapy was tapered over the next 10 months, and she remains on hydroxy-chloroquine. She has had no recurrent fevers over 1 year since her initial presentation, and her energy and appetite have markedly improved.

Kikuchi-Fujimoto disease (also called Kikuchi disease or histiocytic necrotizing lymphadenitis) was first described in Japan in 1972. It is a rare disease, estimated to affect 1 in 2000 individuals.2 The disease most commonly affects young Asian patients (< 40 years old), but there is debate about whether the disease has a marked female predisposition or instead has equal representation between the sexes.3 Of note, our patient was born and raised in Korea, although she moved to the United States over 30 years ago. Kikuchi disease usually presents with lymphadenopathy (in particular cervical lymphadenopathy), fever, fatigue, and leukopenia.2 Cutaneous manifestations, typically erythematous macules or papules, develop on the face, trunk, and/or upper extremities in 40% of patients with Kikuchi disease, similar to the rash that developed initially in our patient.3 The lymphadenopathy and constitutional symptoms that accompany Kikuchi disease are indistinguishable from lymphoma, and misdiagnosis is thought to be common. However, pathologic evaluation of excised lymph nodes shows a unique pattern of histiocytic proliferation with patchy paracortical and cortical necrosis, abundant karyorrhectic debris, and a dearth of neutrophils.3 The cause of Kikuchi disease is currently unknown, and both infectious (either viral or bacterial) and autoimmune causes have been advanced.2,3 One case report documented transmission of Kikuchi disease to 3 separate organ transplant recipients who had received organs from a common donor, suggesting that some infectious trigger is likely.4

Kikuchi disease is typically a relatively benign condition treated only with nonsteroidal anti-inflammatory drugs and acetaminophen, and spontaneous resolution of symptoms commonly occurs within 1 to 4 months after diagnosis. However, severe cases of Kikuchi disease have been reported, with a mortality rate calculated to be 2.1%.3 Cutaneous involvement, as occurred in this patient, often portends a more severe clinical course. Kikuchi disease in recipients of solid-organ transplants1,4 and hematopoietic stem cell transplants5 have rarely been reported, although the immunosuppressed state of transplant recipients may predispose to more severe Kikuchi disease, as the previously mentioned case series of Kikuchi disease in renal, liver, and pancreas recipients from the same donor resulted in recipient death.4 For severe cases of Kikuchi disease, treatment with systemic corticosteroids and hydroxychloroquine, as performed in our patient, can lead to swift disease remission.2,3 Of note, up to 25% of patients with Kikuchi disease will ultimately develop systemic lupus erythematosus, mandating close follow-up of these patients even after the resolution of symptoms.3 This case highlights an uncommon cause of a typical patient presentation. Given the markedly different treatment course and prognosis compared with PTLD, Kikuchi-Fujimoto disease should be on the differential of any liver transplant patient who develops posttransplant lymphadenopathy.

From the 1Department of Surgery and the 2Department of Pathology and Laboratory Medicine, Emory Transplant Center, Atlanta, Georgia, USA
Acknowledgements: The authors have no sources of funding for this study and have no conflicts of interest to declare.
Corresponding author: William H. Kitchens, 101 Woodruff Circle, WMRB 5105, Atlanta, GA 30322, USA
Phone: +1 404 712 2000
E-mail: whkitch@emory.edu 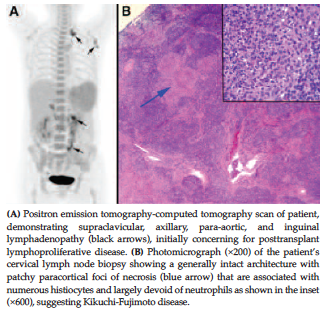