Kidney transplant restores renal function in eligible patients with end-stage renal failure who require renal replacement therapy. There remains a significant disparity between the demand and supply of suitable kidneys for transplant. In recent years, pediatric donors have formed an important area for expansion of the donor pool. However, neonatal donation (< 28 days) remains an underutilized resource. We describe a case of en bloc kidney transplant from a 5-day-old donor after circulatory death into an adult recipient. One kidney thrombosed almost immediately, leaving a single 4.5-cm, poorly functioning kidney. Eighteen months after transplant, the recipient has shown good function with the estimated glomerular filtration rate continuing to improve. This case demonstrates that a single neonatal kidney can grow and adapt to provide adequate renal function in an adult. This experience suggests that a single kidney from a neonate can sustain renal function in adults, and every effort should be made to maximize their use in transplant.

Pediatric donors form an important increased source of high-quality donor organs. However neonatal donation (< 28 days) remains an under­utilized resource with a total of 4 cases of donation from children < 2 years of age in 2017/2018 in the United Kingdom.2

Transplant of neonatal kidneys is technically challenging from both the perspectives of organ recovery and implantation. It is associated with a higher risk of delayed graft function, graft thrombosis, rejection, and hyperfiltration injury.3 To mitigate this risk, kidneys from donors < 5 years of age are typically transplanted en bloc.

We describe a case of en bloc kidney transplant from a 5-day-old donor after circulatory death (DCD) into an adult recipient. One kidney thrombosed almost immediately, leaving a single neonatal kidney. Eighteen months after transplant, the recipient has excellent and improving renal function. This suggests that neonatal kidneys, right from the day of birth, could be considered as a valuable organ source, and every effort should be made to maximize their use in transplantation.

Donor and graft
The donor was a 5-day-old male neonate weighing 4 kg who underwent a failed instrument delivery, requiring an emergency cesarean section with prolonged hypoxia. After cardiopulmonary resus­citation and intubation, the neonate was treated with hypothermia for 72 hours. There was no requirement for vasopressor support, and urine output was 2.5 mL/kg/h with a peak creatinine level of 48 μmol/L. On rewarming, there was no spontaneous ventilatory effort, and the decision was made to withdraw life-sustaining treatment.

After understanding the futility of treatment, the parents volunteered organ donation, and the baby was accepted as a DCD. Circulatory arrest was confirmed 19 minutes after ventilatory support was withdrawn. After rapid abdominal vascular access, the organs were promptly cooled and kidneys were recovered en bloc with the aorta, inferior vena cava, and both ureters on a bladder patch (Figure 1). Each kidney measured 4.5 cm cranio-caudally.

Recipient selection
The selected recipient was a 43-year-old woman with end-stage renal failure of unknown etiology and HLA mismatch of 1:2:1. She was predialysis with an estimated glomerular filtration rate of 15 mL/min/1.73 m2 and had been active on the transplant list for 223 days. She had a body mass index of 26 kg/m2, and hypertension was her only significant comorbidity. She was consented for the nonstandard nature of the transplant, including the significantly increased risks of technical failure, thrombosis, delayed graft function, and primary nonfunction.

Transplant procedure
Both kidneys were transplanted en bloc into the recipient’s right iliac fossa, extraperitoneally (Figure 1). There was excellent uniform perfusion of kidneys at revascularization with production of urine. The total ischemic time was 427 minutes with an anastomosis time of 51 minutes.

Immunosuppression
Basiliximab (Novartis) was given at induction preoperatively and repeated on day 4. Maintenance immunosuppression consisted of tacrolimus (Novartis), mycophenolate mofetil (Teva, Petah Tikva, Israel), and 5 days of prednisolone. Tacrolimus levels were maintained at between 3.4 and 6.5 μg/L during the first 3 months and between 4.9 and 7.8 μg/L thereafter.

Postoperative course
A baseline mercaptoacetyltriglycine-3 (MAG3) renogram was carried out on the first postoperative day, showing only a poorly functioning single kidney. A duplex ultrasonography showed good vascular supply in the arterial inflow and venous outflow; however, only the lateral kidney could be visualized. Salvage was not attempted as it was felt this could jeopardize the entire graft. Sequential duplex ultrasonographic scans showed good perfusion in the lateral kidney but absent flow to the medial kidney, consistent with renal artery thrombosis. This was managed conservatively as the recipient remained clinically stable.

Tacrolimus levels and biochemistry were moni­tored frequently. After an initial sustained rise in creatinine, the level began to decline 6 weeks after transplant along with improvement in urine protein-to-creatinine ratio (Figure 2) and improvement shown in MAG3 renogram imaging. A magnetic resonance imaging scan was carried out at 14 months due to pelvic pain (Figure 3). It revealed no underlying pathology; however, it showed that the solitary kidney had grown in size, measuring 6.8 cm cranio-caudally. The recipient has remained well and currently has stable graft function.

Neonatal kidneys are underutilized for transplant due to their increased risk profile. The United Network for Organ Sharing reports that en bloc transplants from donors < 5 years of age have represented 1.4% (1663/116 674) of all kidney transplants from 1987 to 2003 in the United States.3 In the United Kingdom, the rate is lower, with 0.39% from donors < 5 years of age and 0.12% from those < 2 years of age.2 True neonatal donation (< 28 days) is rarer still, although en bloc kidney transplant from a donor as young as 1-day-old and weighing 1.9 kg has been described.4

Our recipient had thrombosis of 1 of the kidneys in the immediate postoperative period, resulting in a single functioning graft. Rates of thrombosis in pediatric en bloc transplant can be up to 4.11%, which is much higher than in adult donors.3 Thrombosis usually results in complete graft loss; however, loss of a single kidney has been described once growth and function were established with compensation of the remaining kidney.5

Early complication rates are high, and early graft loss is inversely correlated to pediatric donor age.6 However, if these complications can be overcome, the grafts have excellent long-term survival.5 A large study of 130 donors < 10 kg in the United States found a 5-year graft survival rate of 87% in DCD and 91% in donation after brainstem death (DBD) for en bloc kidneys,4 which is comparable to the national 5-year graft survival rate of 92% for adult living donor kidney transplants in the United Kingdom.2 Smaller studies of donors < 5 years of age or < 15 kg have reported 1-year graft survival rates ranging from 85% to 100%.7 There is also evidence suggesting superior long-term graft survival of pediatric en bloc kidneys compared with matched deceased adult donors6 or even living donor transplants.8 This may reflect the naturally higher functional glomerular reserve of a young kidney, and it has been suggested that younger pediatric kidneys may be privileged due to their low nephron mass and reduced exposure to sensitizing events.5

Although pediatric kidneys often undergo a rapid catch-up period of growth following implantation, it is unclear whether this is due to normal or compensatory growth mechanisms.5,9 As reflected in our recipient, slow improvement in creatinine level has been observed, with improvement continuing up to the third year.9 Careful recipient selection is important to minimize the impact of size mismatch. Selected recipients of these pediatric transplants should therefore have a lower body mass index.10 A reduced nephron mass is associated with low birth weight (defined by the World Health Organization as < 2.5 kg), which is linked with hypertension and renal disease later in life.11 Caution should be used when selecting donors of extremely low age or weight, as the impact that this could have on long-term transplant outcomes is unknown.

There are no consensus guidelines for en bloc versus solitary kidney transplant from very young donors. Varying parameters are described based on donor age, weight, and kidney length.3,9,12,13 This case is unique in that the early thrombosis of the medial graft left the recipient with a nephron mass of a single 5-day-old kidney, albeit with the vascular anatomic advantages of an en bloc implantation.

Approximately 42% of pediatric DBD kidneys are rejected after or at the time of retrieval.2 Figures specific to the neonatal age range are unknown; however, the rate of organ discard is inversely proportional to donor weight12 and thus likely to be much greater. The excellent graft function of this single 5-day-old kidney suggests that parameters for discarding en bloc kidneys should be reconsidered.

The opportunity for donation is often overlooked after neonatal and pediatric deaths. Almost half of all deaths in the neonatal intensive care unit are potential DCD candidates, and it is reported that neonatal units may miss the opportunity for donation in up to 75% of eligible infants.14 In the United Kingdom in 2018, there were 8107 deaths in children under 5 years of age.15 This demonstrates an important source of organs, and increasing donation in this group could significantly impact the number of organs available and reduce wait times.

In this instance, the baby’s parents initiated the dialogue on organ donation. It has been highlighted that family request is a critical factor in a successful referral for donation assessment.14 Neonatal mortality is associated with significant parental and professional trauma that may restrict initiating dialogue on donation. Specific training could help neonatal intensive care staff to initiate discussions around organ donation at this highly sensitive time and thus improve donation rates.14

Transplant of small kidneys presents a technical challenge with increased complications in the immediate postoperative period. However, this could be offset by the excellent long-term survival and function of these grafts and contribution to the donor pool. Barriers to neonatal transplant include the need for specialist skills in both recovery and implantation and for those caring for children at the end of their lives with inexperience in organ donation. This case demonstrates that this type of transplant is technically feasible and that even a single neonatal kidney could usefully serve an adult recipient.

From the 1Department of Renal and Pancreas Transplantation, Manchester Royal Infirmary, Manchester University NHS Foundation Trust, and the 2Faculty of Biology, Medicine and Health, University of Manchester, Manchester, United Kingdom
Acknowledgements: The authors have not received any funding or grants in support of the presented research or for the preparation of this work and have no further declarations of potential conflicts of interest.
Corresponding author: Titus Augustine, Renal and Pancreas Transplant Unit, Manchester Royal Infirmary, Oxford Road, Manchester M13 9WL, UK
E-mail: Titus.Augustine@mft.nhs.uk Figure 2. Laboratory Results in Recipient From Transplant to 18 Months Posttransplant 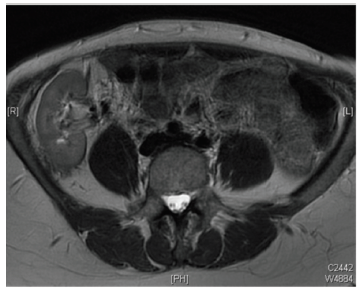