The use of autologous saphenous vein grafts (ASVGs) is a rarely required means of facilitating implantation in certain renal transplant recipients,1 particularly in living donor recipients with short donor vessels or after donor vessel injury. Although apparently durable, ASVG aneurysm (ASVGA) formation is described as a late complication of the use of this conduit in renal transplant procedures.2,3 By virtue of the rarity of the use of ASVGs in renal transplants and subsequent ASVGA formation, there is a paucity of data to guide management of this issue with the exception of reports of single cases. We have little knowledge of the natural history of the condition and whether intervention is required or at what size of aneurysm. Therefore, treatment must be rationalized on the basis of the pathophysiology of the condition, the status of the patient, and the anatomy of the aneurysm in relation to the renal and recipient vasculature. Options might include endovascular technique, in situ aneurysm excision with cooling,3 in situ reconstruction without cooling,2 or graft explantation and cooling and ex situ excision of the aneurysm.4 Reconstruction with polytet­rafluorethylene,2 or further ASVG,3,4 has been described. In this report, we outline a case of ASVGA in a renal transplant recipient who was treated operatively via explantation, resection, and recon­struction ex situ with a deceased donor arterial allograft conduit 21 years after initial transplant.

A 45-year-old woman with end-stage renal disease secondary to hemolytic uremic syndrome and immunoglobulin A deficiency received a living donor renal transplant in November 1998. The donor was her sister. After removal of the allograft from the donor, a dissection was noted of the donor renal artery. After we flushed the allograft with cold preservation solution, we excised the damaged donor renal artery. We recovered an unmodified ASVG from the ipsilateral thigh and performed reconstruction of the transplant renal artery to allow excision of the damaged portion of the donor artery. We then implanted the renal allograft into the recipient in a standard manner with the ASGV anastomosed end-to-end to the recipient internal iliac artery. The recipient progressed with an uncomplicated recovery.

In July 2019, to investigate an elevated serum creatinine and vague lower abdominal pains of about 3 months duration, we performed an ultrasonogram. A 3 × 4-cm cystic mass was seen in the pelvis and described as an ovarian cyst. After investigation by the gynecology team, the vascular nature of the lesion was recognized, and a multiphase computed tomography angiogram was performed in November 2019. This revealed a fusiform aneurysm involving the renal artery (measuring 31 × 42 mm), extending into the upper and lower polar branches (Figure 1A).

Because of the lack of a single landing zone, endovascular techniques were not considered appropriate, and, in November 2019, the patient underwent surgery. The procedure involved complete mobilization of the graft, including the ureter and all associated donor vasculature. The graft ureter was divided at the level of the bladder, and the cystotomy was closed with 5-0 PDS polydioxanone sutures. The patient received 5000 U of systemic heparin prior to vascular exclusion. The internal iliac artery was divided with a 30-mm endovascular stapler (Endo-GIA Tri-Staple, 2 mm/30 mm; Medtronic). The external iliac vein was clamped, and the transplant renal vein was divided sharply. The graft was flushed with cold Marshall hypertonic citrate (Soltran, Baxter Healthcare Australia) and placed in ice slush. Inspection confirmed that the aneurysm was in the ASVG with 2 native arterial branches (the inferior and superior polar renal arteries) originating from the aneurysmal sac (Figure 1B). We dissected and excised the aneurysm (Figure 1, C and D) in a manner that preserved all other hilar structures.

An ABO-compatible, third-party deceased donor iliac artery allograft was available from our institution’s tissue bank. These grafts are stored at 4°C in University of Wisconsin solution for a maximum of 14 days after procurement, according to the nationally agreed protocol.5 The external and internal branches of the deceased donor iliac artery were anastomosed end-to-end, respectively, to the inferior and superior polar renal arteries of the graft with 7-0 polypropylene sutures (Figure 1E). The renal vein was also extended with a segment of reversed external iliac vein from the same deceased donor. After 60 minutes on ice, we reimplanted the graft. We performed an end-to-side continuous anastomosis of the donor common iliac artery and reversed iliac vein graft to the recipient external iliac artery and vein (reusing the previous venous anastomosis site), respectively, with 6-0 polypropylene sutures (Figure 1F) and with warm ischemia time of 14 minutes. The graft ureter was anastomosed to the bladder at a fresh site using an extravesicular technique with 5-0 PDS polydioxanone sutures over a 4.7F multilength ureteric stent (Cook Medical).

Renal transplant aneurysms are rarely reported, and the majority of the cases are either pseudo-aneurysms of the renal artery (often mycotic) or anastomotic false aneurysms.6,7 Because late aneurysm formation of the transplant renal artery is likely an underreported entity, the true incidence may never be ascertained; however, longitudinal studies suggest that the incidence is in the range of 0.2% to 0.3%.8,9 Our case report described an exceedingly unusual situation of late formation of an aneurysm related to an ASVG.

Although ASVG use is an uncommon occurrence in renal transplants, the data from more than 5000 SVGs in aortocoronary bypass procedures suggest that ASVGAs are rare (< 0.07%), late, and usually asymptomatic complications.10 We do not have data to guide management of the condition, but, as with all aneurysms, size and symptoms would seem to be the most reasonable criteria upon which to rely. The extrapolation from SVG use in other contexts must also be cautioned. In particular, there is no evidence of this issue when the ASVG is used as a venous conduit. Here, the pressure is lower, and the vein is typically modified as a spiral or panel graft to accommodate the greater diameter required of renal veins, and this may influence the long-term integrity of the tissue.1

This case is not the first report of ASVGA formation in renal transplant.2,3 It is the first report of the management of the problem using ex situ (clamp, perfuse, reimplant) techniques11 and deceased donor third-party allografts.12 The details of the previous reports are summarized and contrasted with the current case in Table 1. There are remarkable similarities among all of these patients. All patients were followed surgically, and hence, to date, there has been no report of management of a renal transplant-associated ASVGA using endovascular techniques. The important implication of this case and review of the associated literature is that recall and surveillance of ASVG used as an arterial conduit in renal transplant recipients should be considered in patients whose graft is still in situ starting at no more than 10 years posttransplant. Earlier detection may allow the ASVGA to be remediated at a less advanced stage, potentially by endovascular means with lower risks of complications and graft loss. 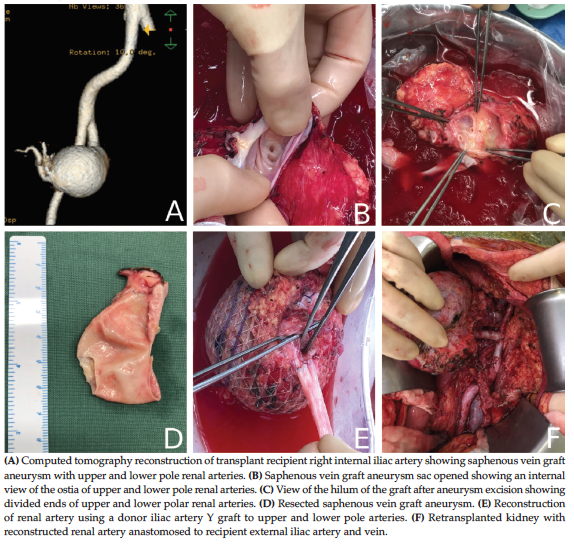