Objectives: There are limited studies about the possible relationship between genetic variations of costimula­tory genes and susceptibility to hematologic malignancies like leukemia and lymphoma.

Conclusions: We show for the first time that genetic variations of costimulatory molecules CTLA-4, CD28, and PD-1 may be associated with susceptibility of Iranian patients to leukemia.

Full activation of T cells requires 2 signals delivered by antigen (signal 1) and costimulatory molecules (signal 2), which are expressed on activated antigen-presenting cells.1,2 The costimulatory molecules, including cytotoxic T-lymphocyte antigen 4 (CTLA-4, also known as CD152), cluster differentiation 28 (CD28), inducible T-cell costimulator (ICOS), and programmed cell death 1 (PD-1), are expressed on the T-lymphocyte surface and take part in regulation of the immune response.1,2 Cytotoxic T-lymphocyte antigen-4, which is encoded by a gene in chromosome 2q33, plays a critical role in down-regulation of T-cell proliferation. On the other hand, CD28 delivers a positive costimulatory signal for T-cell proliferative response and binds to the same ligand as CTLA-4.1,2 The costimulatory ICOS acts as a positive regulator of T-cell activation, promoting helper T-cell differentiation, B-cell development, and antibody secretion.3 The costimulatory PD-1 (also known as PDCD-1) is another costimulatory molecule of the CD28 immunoglobulin superfamily of receptors; similar to CTLA-4, it is known as a negative regulator of T-cell response.4,5

Improving antitumor immunity requires efficient signaling through costimulatory molecules. However, tumor cells exploit different mechanisms to evade immune surveillance, such as decreased expression of costimulatory molecules or up-regulation of coinhibitory molecules. This lack of sufficient costimulation in the tumor microenvironment could keep T cells in an anergic T state, thereby preventing appropriate antitumor immune responses.1 Different genetic polymorphisms in costimulatory molecules have been identified, and the association of the polymorphisms of the CTLA-4, CD28, ICOS, and PD-1 genes has been extensively studied in solid tumors like cervical cancer, breast cancer, and lung cancer.6-9 However, studies are limited regarding the possible relationship between genetic variations of the costimulatory genes and susceptibility to hema­tologic malignancies like leukemia and lymphoma. A significant association between CTLA-4, CD28, and ICOS polymorphisms and susceptibility to non-Hodgkin lymphoma (NHL) and B-cell chronic lymphocytic leukemia (B-CLL) has been shown in some studies.10-13

Patients
Between 2012 and 2013, 59 leukemia patients were referred to Namazi Hospital and enrolled in this study. Of these patients, 28 had acute myeloid leukemia (AML), 20 had acute lymphocytic leukemia (ALL), and 11 had chronic myelogenous leukemia (CML). Leukemia was diagnosed by a specialized oncologist using morphologic, cytochemistry, and immunophenotyping tests. Forty-six matched healthy volunteers were recruited as the control group. This study was approved by the Ethics Committee of Shiraz University of Medical Sciences, and written informed consent was provided by all participants.

Sample collection
Five milliliters of fresh peripheral blood and/or bone marrow samples were collected in ethylenedia-minetetraacetic acid (EDTA)-containing tubes. DNA was extracted by QIAamp DNA Mini-kit (Qiagen, Hilden, Germany) according to the manufacturer’s instructions and stored in a -80°C refrigerator.

The results showed that the frequency of the CTLA-4 -318 TT genotype was significantly higher in the control group than in patients with leukemia (P = .01, OR = 0, 95% CI undefined).

No significant differences were observed between patients with leukemia and the healthy control group regarding CTLA-4 -1661A/G and -1722T/C, PD-1.3, and the ICOS genotype as well as allele frequency (P > .05).

Altered functions of the immune system, especially a defective T-cell response, has been observed in patients with hematologic malignancies.19 In this regard, the potential role of the genetic factors affecting the immune system is indispensable. An association of the costimulatory molecule gene polymorphisms and susceptibility to autoimmune diseases and solid tumors has already been previously found.20 However, data on the role of costimulatory molecule gene polymorphisms and susceptibility to hematologic malignancies, especially leukemia, are limited.

The CTLA-4 -318C/T (rs5742909) and +49A/G (rs231775) polymorphisms are located in the promoter and exon 1 regions of the CTLA-4 gene, respectively.21 It has been demonstrated that such polymorphisms in the CTLA-4 gene might affect gene transcription, protein expression, and interaction of CTLA-4 gene with the CD80/CD86 ligand, thus perhaps influencing the outcome of the immune response.22-24 The PD-1.9 -7625 T/C polymorphism (also known as rs2227982) occurs in an exon that affects protein synthesis by replacement of valine amino acid with alanine.25 A T/C substitution at position +17 of the CD28 gene is located in the third intron (IVS3 +17T/C).26

Dysregulated expression of CD28 and CTLA-4 has been reported on peripheral nonmalignant T cells from patients with B-CLL.27-29 In addition, some evidence has suggested that polymorphisms of these costimulatory molecules may be responsible for this abnormal expression or dysfunction.30,31 The work by Monne and colleagues on CTLA-4 gene poly­morphism and susceptibility to NHL was among the earliest report that studied an association between CTLA-4 gene variants and hematologic malignancies. They showed that the CTLA-4 +49 AA genotype was overrepresented among NHL.10 Moreover, Frydecka and associates demonstrated that CTLA-4 -319 C/T and CD28 +17 C/T but not CTLA-4 +49A/G polymorphisms may contribute to susceptibility to B-CLL.13 They revealed that the frequency of the T allele and T phenotype (genotype TT+CT) of the CTLA-4 -319 C/T polymorphism was significantly higher in patients than in the control group.13 In addition, the presence of the C allele and C phenotype (genotype CC+CT) of the CD28 +17C/T was associates with improved overall survival in patients with B-CLL.13 Consistent with this finding, the CD28 +17 CC genotype was significantly increased in our patients with leukemia. Nevertheless, despite the higher frequency of C allele in our patients with leukemia, the difference was not statistically significant.

Suwalska and associates showed that the frequency of the CTLA-4 -319 T allele and the CT and TT genotypes were increased in B-CLL patients compared with healthy controls.12 In a study by Hui and associates, the frequencies of TC and TT genotypes and T allele of CTLA-4 -318 position were found to be significantly higher in children with ALL versus the control group.32 Piras and associates reported that the frequency of the CTLA-4 +49 A allele was increased in patients with NHL compared with controls.11 In line with this finding, the frequency of CTLA-4 +49 A allele was higher in our patients with leukemia than in the control group, although the difference was not statistically significant.

However, Dai and associates showed no significant association between CTLA-4 +49A/G and -318C/T with susceptibility to different lymphoid malignancies, including chronic lymphocytic leukemia, mucosa-associated lymphoid tissue lymphoma, NHL, and multiple myeloma.21 Also, Grzywnowicz and associates showed that PD-1.3 and PD-1.9 were not associated with susceptibility to B-CLL.33 The discrepancy between our results and other studies may be due to different sample sizes and the different genetic background of the study populations, which can be related to diverse ethnic groups.

In conclusion, our study showed for the first time that genetic variations of the costimulatory molecules CTLA-4, CD28, and PD-1 may be associated with susceptibility of Iranian patients to leukemia. However, further studies are recommended to confirm these associations in a larger population of patients with leukemia.

From the 1Hematology Research Center and the 2Transplant Research Center, Namazi Hospital, Shiraz University of Medical Sciences, Shiraz, Iran
Acknowledgements: The authors have no sources of funding for this study and have no conflicts of interest to declare. The authors thank Dr. Nasrin Shokrpour at the Center for Development of Clinical Research of Namazi Hospital for editorial assistance.
Corresponding author: Mahdiyar Iravani Saadi, Hematology Research Center, Shiraz University of Medical Sciences, Shiraz, Iran
Phone: +98 9171079396
E-mail: mahdiiravani@yahoo.com 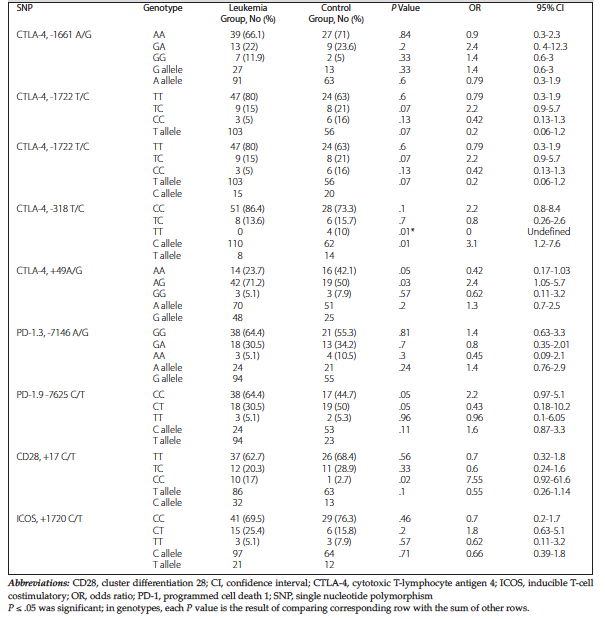 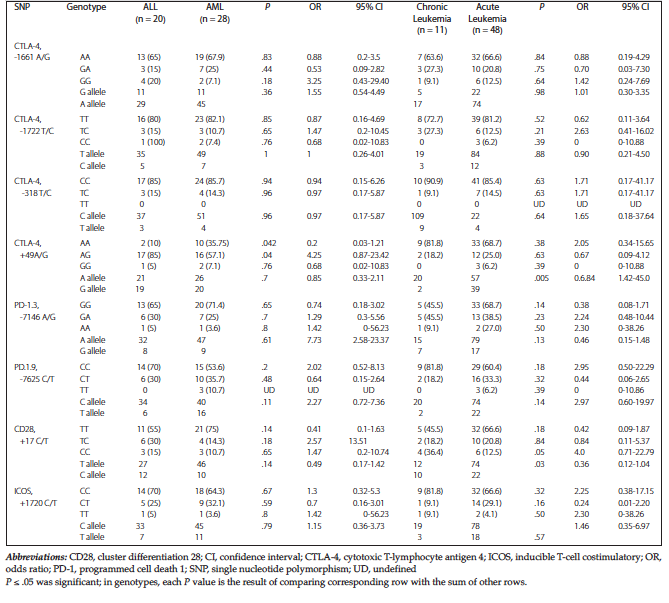