Materials and Methods: We evaluated early com­plications and survival of patients with hepatocellular carcinoma treated with liver transplant (57 patients) or hepatic resection (36 patients) at our center between 1998 and 2010.

The primary treatment of HCC is surgery. For patients who are inoperable, local ablative treatments can be performed. Care is required not only for the tumor but also for the underlying liver disease in HCC. Although surgical resection is curative, it is prevented due to the existence of cirrhosis in 90% of patients. Additionally, there is commonly diffuse or multiple lesions, and resection is also not appropriate for these patients. Liver transplant is a curative treatment for both the underlying chronic liver disease and HCC.2

Here, we retrospectively collected the data of patients with HCC who were treated with hepatic resection or liver transplant in our hospital and evaluated their early complications and survival.

Between January 1998 and January 2010, 113 patients were diagnosed with HCC and treated with hepatic resection or liver transplant in our hospital. Inclusion criteria were a pathologic diagnosis of HCC and cirrhosis before surgery, liver transplant or hepatic resection for HCC and cirrhosis, or incidental HCC in postoperative pathologic evaluation. Based on these criteria, 93 patients were included, with 20 patients (16.2%) excluded from study.

Hospital records of patients were evaluated retrospectively; survival data were obtained by calling patients or their relatives by telephone. Of 93 patients, 57 (61.3%) had liver transplant and 36 (38.7%) had hepatic resection.

Statistical analyses
Parametric variables were analyzed with independent t test and Mann-Whitney U test; nonparametric variables were analyzed with chi-square or Fisher exact test. The Kaplan-Meier method was used for survival analyses. The groups were compared by log-rank test. Progression was defined as time from diagnosis to recurrence, metastasis, or death without recurrence; survival was defined as time between diagnosis and death. Cox proportional hazards model was used to evaluate the effects of multiple variables on survival. P < .05 was defined as significant.

Mean follow-up time for both groups was not significantly different (34.5 vs 29 months for liver transplant vs hepatic resection; P = .312). The length of hospital stay was 30.9 days after liver transplant and 17.3 days after hepatic resection, which was significantly different (P < .001). Both groups had similar complication rates (P = .749) (Table 1).

Our univariate analysis showed no significant prognostic factors. Univariate analyses of the liver transplant group showed that meeting the Milan criteria and presence of a single tumor were factors related to overall (P = .01 and P = .06) and event-free survival (both P = .03). A single tumor and meeting Milan criteria were found to be positive prognostic factors for patients with HCC who were treated by liver transplant.

Hepatitis B virus is the cause of HCC in 53% of patients worldwide.8,13 The incidence of HCC is even higher in countries where HBV is endemic. Turkey is an endemic country for HBV, with HBV infection being the most important risk factor for HCC.12-14 Regarding factors leading to HCC in our study, HBV is the main reason in 74.2%, hepatitis C virus (HCV) in 10.8%, alcoholism in 9.7%, and undetermined in 5.4% of patients (Table 1). Other studies from Turkey also reported HBV as the most common risk factor for HCC, with rates of HBV of 44.4% to 65.7% and rates of HCV of 21.3% to 28.6% in patients with HCC.8-10 In contrast, the most important risk factor of HCC is HCV in Western Europe and North America.15,16

Figure 1. Overall and Disease-Free Survival in Patients With Hepatocellular Carcinoma

Figure 2. Overall and Disease-Free Survival in Patients with Hepatocellular Carcinoma Within Child-Turcotte-Pugh A

Figure 3. Overall and Disease-Free Survival in Patients with Hepatocellular Carcinoma Within Child-Turcotte-Pugh B

Figure 4. Overall and Disease-Free Survival in Patients with Hepatocellular Carcinoma Within Milan Criteria 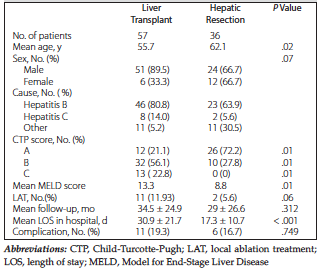