Objectives: Orthotopic liver transplant can be accompanied by an obscure bleeding pattern in patients with severe hepatic malfunction. In the present study, coagulation conditions of patients with cirrhosis of the liver due to primary sclerosing cholangitis and nonbiliary causes of cirrhosis were compared using rotational thromboelastometry assays obtained before orthotopic liver transplant.

Materials and Methods: This case control study analyzed patients who were candidates for orthotopic liver transplant from 2010 to 2016. Eighty patients with cirrhosis of the liver (40 patients with primary sclerosing cholangitis and 40 with nonbiliary causes of cirrhosis) were randomly selected and enrolled into the study. Patients received rotational thrombo­elastometry assays under anesthesia just before the start of the operation, and results were compared between the 2 patient groups.

Results: Of 80 patients, 52 were men and 28 were women. In the assays, we found that maximum amplitudes in 10 and in 20 minutes and maximum clot firmness parameters were higher in patients with primary sclerosing cholangitis. The alpha angle and clot formation time were different in the intrinsic and extrinsic assay panels. In the intrinsic assay, we found clotting time to be shorter (P < .05). The average of all parameters in all 3 assays (intrinsic, extrinsic, and fibrinogen contribution) was lower in patients with nonbiliary causes of cirrhosis than in those with primary sclerosing cholangitis.

Liver damage is usually accompanied by coagulation disorders. The hepatocyte system could be defined as a precise and sensitive balancing system between prothrombotic and antithrombotic processes to prevent heavy bleeding.1 Liver failure is associated with multiple modifications in the hemostatic system because of decreased plasma levels of procoagulants and anticoagulants. Accordingly, thrombosis or bleeding depends on the type of imbalance in this complex mechanism.

Primary sclerosing cholangitis (PSC) is a known progressive cholestatic liver disorder.2,3 Orthotopic liver transplant is the only definitive therapy for advanced liver failure, including for patients with PSC.4 Compared with other chronic liver diseases, cholestatic disorders such as PSC have lower rates of variceal bleeding and blood loss during orthotopic liver transplant. Although clinical symptoms alone cannot depict a proper picture of coagulation conditions, the higher probability of thrombosis of the hepatic artery and portal vein in PSC patients can indicate a hypercoagulable state.5

Rotational thromboelastometry (ROTEM) is an effective tool to assess blood viscoelastic properties, clot initiation, formation, and stability.8-10 Previous studies have shown that regular monitoring of the blood coagulation process with ROTEM has led to a reduction in transfusion volume and a reduction in the number of patients who need blood transfusions.11,12 Rotational thromboelastometry tests include FIBTEM, APTEM, INTEM, EXTEM, HEPTEM, and NATEM assays. In the FIBTEM assay, platelet function in the coagulation process is inhibited with cytochalasin D; in the APTEM assay, the fibrinolysis process is inhibited with aprotinin.13 In the INTEM assay, the coagulation activation occurs through ellagic acid. The INTEM assay mildly activates the hemostasis contact phase and is affected by coagulation factors (fibrinogen, platelets, and heparin). In the EXTEM assay, the coagulation process includes rabbit brain tissue factor as the reagent. The EXTEM assay mildly activates hemostasis through the physiologic tissue factor activator and is influenced by extrinsic coagulation factors (fibrinogen and platelets) but not by heparin. Results obtained from these 2 tests have been used to determine administration of fresh frozen plasma, fibrinogen, platelets, and coagulation factors.14,15 In the present study, we assessed the coagulation conditions of patients with PSC and patients with nonbiliary causes of cirrhosis (non-PSC) before orthotopic liver transplant using EXTEM, INTEM, and FIBTEM tests to compare coagulation processes between these 2 patient groups.

Patients who did not consent and those who had gallbladder disease were excluded. The surgical team had information about the cause of cirrhosis. Before the surgical procedure, all patients underwent testing with a ROTEM delta machine (Tem International GmbH, Munich, Germany). Data obtained included maximum amplitude in 10 minutes (A10), maximum amplitude in 20 minutes (A20), maximum clot firmness (MCF), alpha angle, clot formation time (CFT), and clotting time (CT). Furthermore, the ratio of MCF FIBTEM to EXTEM (as a ratio of platelet function) was assessed and compared between the 2 groups. The surgical team monitored coagulation throughout surgery with ROTEM.

We compared clinical findings and Doppler ultrasonography results at 1-month follow-up to assess surgical complications and thrombosis in the 2 groups. The Kolmogorov-Smirnov test was performed to evaluate data normality. For statistical analyses, parametric independent t tests and nonparametric Mann-Whitney U tests and chi-square tests were used. All tests were 2-sided, and P values < .05 were considered significant.

Our study included 52 male and 28 female patients; the PSC group was composed of 67.5% male and 32.5% female patients. Patients ranged between 22 and 62 years old in the PSC group and between 11 and 62 years old in the non-PSC groups. Demographic characteristics and several subsidiary statistics, including Model for End-Stage Liver Disease (MELD) score, platelet counts, and causes of liver disease, are summarized in Table 1 and Table 2.

Table 3 compares the differences between averages of A10, A20, MCF, alpha angle, CFT, and CT parameters measured with EXTEM. All parameters except CFT and CT were significantly lower in the non-PSC group than in the PSC group (P < .05).

We also compared differences in A10, A20, MCF, and alpha angle measured with INTEM between patients with PSC and non-PSC patients. Our results showed that averages for each of these parameters were significantly less in the non-PSC group than in the PSC group (P < .05). There were significant differences between CT and CFT averages in non-PSC and PSC patients (P < .05), with averages of these parameters greater in the non-PSC group (Table 4).

With the FIBTEM assays, differences between groups with regard to CFT, MCF, A10, A20, alpha angle, and CT showed that the averages of these parameters were less in the non-PSC group than in the PSC group. Of note, there were significant differences shown in A10, A20, and MCF (P < .05; Table 5).

The liver plays a vital role in blood coagulation and in the primary and secondary hemostasis processes. Coagulopathy in cirrhosis occurs as a result of a variety of factors, such as a defect in quantity and quality of platelets, reduction in coagulation factor, or hyperfibrinolysis.16

Merely relying on clinical symptoms in patients with hepatic diseases does not depict an appropriate picture of the patient’s coagulative condition. However, findings from extensive studies and results of clinical evidence, including coagulation tests, can lead to a better understanding of the patient’s coagulative condition. Some researchers have reported that, in patients with PSC, there is a probability of hypercoagulopathy.17,18

Previous studies have shown that, after orthotopic liver transplant in patients with PSC, thrombosis in the hepatic artery and portal vein are increased compared with that shown in non-PSC patients. Therefore, there is a higher probability of occurrence of hypercoagulopathy in PSC patients because blood hypocoagulation is a particular symptom of cirrhosis.19 Compared with other approaches used to monitor coagulation processes,20 ROTEM has been shown to be a safer device in the operating room. This device can provide precious information about viscoelastic properties of the blood coagulation process and also clot lysis.21

In EXTEM, CT is a function of external pathway coagulation factors like tissue factor and factor XIII; therefore, the almost similar CT results in EXTEM in PSC and non-PSC patients demonstrated that both groups had near normal levels of factor XIII and tissue factor due to normal synthesis.

Our findings are in line with studies done from Ben-Ari17 and Pihusch5 and associates. In 1997, Ben-Ari and colleagues used thrombelastography to evaluate blood coagulation conditions, with results showing a 2 times larger standard deviation difference compared with the control group. Among 47 patients with primary biliary cirrhosis (PBC), 21 patients with PSC, 40 patients without cholestatic cirrhosis, and 40 healthy people (control group), hypercoagulability existed in 13 patients (28%) with PBC, 9 patients (43%) with PSC, 2 patients (5%) with noncholestatic cirrhosis, and 0 patients in the control group. Their results also demonstrated that there was no correlation between the concentration of fibrinogen and number of platelets with thrombelastography parameters.17 Conversely, our study demonstrated that, with ROTEM, most patients with PSC were within the normal coagulation range.

By quantitative evaluation of coagulation in patients with PSC and non-PSC cirrhosis, we observed no differences in clinical thrombosis formation in the hepatic artery and portal vein and no deep vein thrombosis during year 1 after liver transplant (P > .05). In addition, no clinical hypercoagulopathy state was found in these patients. Previous studies have shown that PSC patients are hypercoagulable; however, our study showed that PSC patients had normal coagulable parameters. This difference is probably due to the greater precision of ROTEM and the number of factors it is able to analyze compared with that shown with instruments used in previous studies. The contrast of a hypercoagulable state in PSC patients previously shown versus the normal coagulable state that we found may reveal the more exact and complete spectrum of data measured with ROTEM analyses.

In our study, we observed no significant differences in MELD score between the PSC and non-PSC group (P < .05). The evaluation of blood coagulation in these 2 groups revealed that non-PSC patients showed slight hypocoagulopathy, pre­sumably due to the defective function of hepatocytes as a result of cirrhosis, whereas in the PSC group a normal balanced blood coagulation condition was observed.

Blood coagulation disorders may occur after surgical procedures. The use of precise and rapid tests such as ROTEM and knowledge of the properties of the underlying disease, like PSC, may play important roles in the prevention of bleeding and consequent complications.

Table 1. Demographic and Several Subsidiary Statistics in Patients With Primary Sclerosing Cholangitis and Patients With Nonbiliary Causes of Cirrhosis 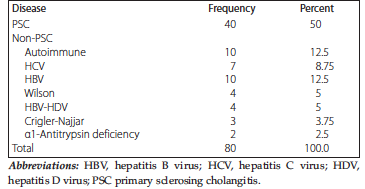 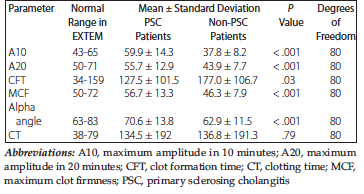 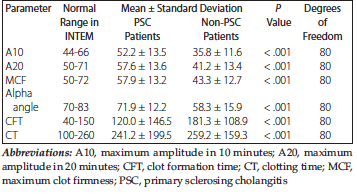 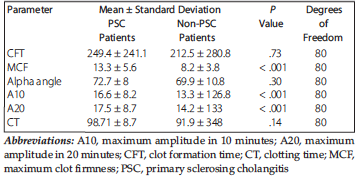