Idiopathic (Immune) thrombocytopenic purpura (ITP), a common acquired bleeding disorder of childhood, is a heterogeneous autoimmune syndrome characterized by the production of antiplatelet antibodies against circulating platelets, resulting in destruction and reduced platelet count (< 100 × 109/L) followed by an increased risk of bleeding.1,2 In children, ITP may be triggered by a viral infection, usually 3 weeks before presentation, in 50% to 65% of affected cases.3 Bleeding symptoms can be variable, from mild without need for treatment to severe requiring urgent treatment.4 Overall, the first line of therapy for acute ITP is corticosteroids, and the second choice is intravenous immunoglobulin (IVIG) or intravenous anti-D immunoglobulin.1 A small subset of patients may not respond to standard treatment; therefore, their care is a matter of debate because there is no consensus regarding how to proceed with treatment in such refractory cases.5 Patients with a history of organ transplant who are treated with immunosuppressive drugs have a relatively low immune reactivity, which makes them more vulnerable to aggressive agents, microorganisms, and especially viruses.6 The causes for reduced numbers of platelets in patients under­going liver transplant are complex, not completely understood, and likely to be multifactorial.7 Here, we report the successful treatment of ITP after liver transplant with antiviral medication.

A 17-month-old girl was admitted with signs of petechiae and ecchymosis to a tertiary hospital. Physical examination on admission showed that the patient did not have any signs of fever or chills and no history of infection; in addition, her vital signs were normal. Examinations of the lungs and heart were also within normal limits. Petechiae and ecchymosis were observed on the head, face, and chest, but the patient had no organomegaly or lymphadenopathy. The patient had a liver transplant surgery 11 months previously because of decom­pensated cirrhosis and multiple hepatic nodules due to tyrosinemia type 1. She underwent living related liver transplant with blood group B-positive and body weight of 11.5 kg from her mother with B-negative blood group. The patient’s posttransplant period was uneventful, and she showed normal graft function. After transplant, the patient had received prophylactic valganciclovir (150 mg/day) for 3 months and cotrimoxazole (2 mg/kg) every night. Immunosuppressive agents included tacrolimus (2 mg) twice per day and prednisolone (5 mg) every other day.

On the day of admission, the patient had melena, with positive guaiac-based fecal occult blood test. Her complete blood count results showed a platelet count of 5 × 109/L. Procalcitonin level was 0.24 (normal range of ≤ 0.15 ng/mL), and her C-reactive protein level was 5 (normal range of < 6 mg/l). The patient’s liver function test was normal. Serum lactate dehydrogenase was high (1246 IU/L), and urine analysis showed trace amounts of blood. Blood culture results were negative. A color Doppler sonography scan of the portal system and hepatic veins showed normal flow, but the spleen was prominent in size 11 months after liver transplant.

Blood samples for cytomegalovirus (CMV), Epstein-Barr virus (EBV), and parvovirus B19 infections were obtained for polymerase chain reaction (PCR) tests. Because of the likelihood of drug-induced thrombocytopenia, cotrimoxazole was discontinued and tacrolimus dose was reduced to 1 mg/day.

Bone marrow aspiration and trephine biopsy were performed to rule out posttransplant lymph­oproliferative disorder. The results showed normal cellular marrow with increased numbers of megakaryocytes in favor of ITP (Figure 1). The results of bone marrow flow cytometry indicated the presence of 2% of immature myeloid cells and about 4% of hematogones, which was not suggestive of malignancy. With the possibility of ITP, daily methylprednisolone (30 mg/kg) was given for 3 consecutive days. Despite methylprednisolone therapy, the patient’s platelet count was still extremely low (2 × 109/L). Because the patient’s platelet count was critically low, this was considered as an emergency situation. Therefore, daily IVIG (1 g/kg) for 2 days was immediately given. The patient’s platelet count rose slightly but without dramatic response, showing a level of 7 × 109/L (14 days after start of bleeding symptoms).

On day 15 after IVIG administration, the patient showed no durable response to routine therapy. The PCR tests showed negative parvovirus PCR results; however, EBV and CMV PCR results showed positive plasma levels of 185 000 copies/mL and 5400 copies/mL, respectively. Therefore, intravenous acyclovir was started for 2 weeks followed by oral administration for 31 days (at which time both PCR tests became negative for the second time).

On day 36, liver enzymes had increased (aspartate aminotransferase [AST] of 169 U/L, alanine aminotransferase [ALT] of 400 U/L, and alkaline phosphatase [ALP] of 1026 U/L). Causes of elevated liver enzymes were investigated with sonography of transplanted liver. Results revealed no signs of biliary tract abnormality or parenchymal damage. A color Doppler sonography of the portal system and the hepatic vein was also conducted, which showed normal conditions 12 months after liver transplant.

Because the patient’s tacrolimus level was 5.8 ng/mL, her dose was returned to 2 mg twice daily. Liver biopsy was not amenable due to low platelet count; however, we suspected acute rejection owing to liver function disturbance due to decreases in immunosuppressant drugs. Therefore, daily intravenous methylprednisolone (30 mg/kg) for 3 days was prescribed for the patient followed by oral prednisolone at 2 mg/kg per day instead of 0.7 mg/kg per day.

The patient’s platelet count increased on postadmission day 58 to 102 × 109/L following full treatment of viral infection, with liver function tests showing normal results after treatment with everolimus. Regular follow-up showed continued elevations in platelet count until month 3 after discharge, at which time prednisolone was tapered to 0.5 mg/kg per day (Figure 2).

Idiopathic thrombocytopenic purpura is a common pediatric hematology disorder characterized by a low platelet count and increased risk of muco­cutaneous bleeding.2 It is usually classified into 2 forms: primary, which is idiopathic in origin, and secondary, which is caused by variety of factors. These factors include drugs, malignancies, infections such as acute viral infections, and live attenuated virus vaccination, as well as chronic infections like parvovirus and CMV.4,8,9 In a study by Shimanovsky and associates, CMV-associated ITP was shown to result in severe refractory thrombocytopenia that was unresponsive to standard therapy.5

Although most of the reported patients with ITP responded to routine therapy (immunosuppressant and IVIG), one patient reported by Arnold and associates required an antiviral drug (ganciclovir) for full recovery.14

Our patient also showed ITP after liver trans­plant, which was diagnosed by acute onset of thrombocytopenia and increased numbers of megakaryocytes in bone marrow aspiration. The patient did not respond to routine treatment with IVIG and intravenous methylprednisolone pulse therapy. We concluded that EBV and CMV infection can play an important role in the occurrence of ITP after liver transplant and ITP can be refractory to standard therapy. For these patients, a course of antiviral therapy should be considered. 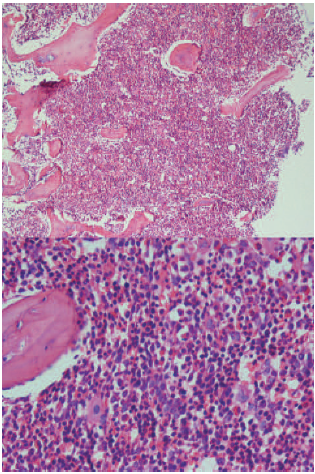 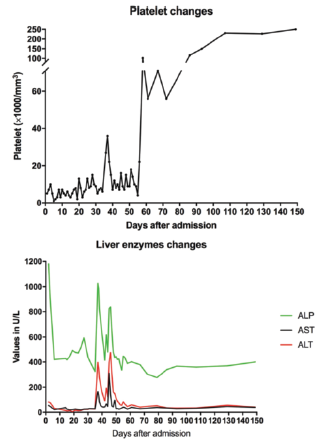