Vascular complications have frequently been reported after orthotopic liver transplant with hepatic artery thrombosis, portal vein thrombosis or stenosis, and hepatic vein stenosis being the most common.1 In addition to liver transplant, arteriovenous fistulas have been frequently described in the peripheral circulation associated with many arteriovenous malformation syndromes.2 However, fistulous communications between an artery and the portal vein, known as arterioportal fistulas (APFs), rarely occur but pose a major clinical challenge, especially after liver transplant.3 Arterioportal fistulas are uncommon after liver transplant, with a reported incidence of 0% to 5.4%.4 Most of these cases occur in the setting of posttransplant iatrogenic trauma. Here, we report an unusual case of an APF occurring 7 months after deceased donor orthotopic liver transplant presenting with ascites and abdominal pain.

A 43-year-old male patient, who underwent deceased donor liver transplant for ethanol-related cirrhosis, which was decompensated in the form of ascites and hepatic encephalopathy, presented 7 months after transplant with mild abdominal distension and pain. On evaluation, the patient had thrombocytopenia, high serum-ascites albumin gradient (SAAG 1.6) ascites, and deranged liver functions (Table 1). A Doppler examination of the splenoportal axis showed a dilated portal vein measuring 16.3 mm with 20% narrowing at the luminal site, hepatofugal flow in the recipient portal vein, normal hepatic veins, a normal liver, an enlarged spleen (16.1 cm) with multiple periportal collaterals, and mild ascites.

During the hospital stay, the patient had a sudden clinical decline with a progressive increase in ascites and a dramatic rise in serum bilirubin (up to 21 mg/dL) without significantly increased trans­aminase levels. In view of unexplained deterioration, a triphasic computed tomography (CT) scan was done. The CT scan showed rapid contrast flow in both the portal and hepatic arterial phase with a communicating fistula between the hepatic artery and portal venous system (Figure 2).

The patient underwent digital subtraction angi­ography (DSA), which was followed by embolization of the APF (Figure 3). After embolization, there was a gradual decrease in serum bilirubin (maximum 21 to 4.2 mg/dL) and resolution of ascites. A repeat Doppler scan of the portal venous system showed established hepatopetal flow with progressively rising portal flow velocities. The patient’s platelet count also gradually increased, and his symptoms resolved over the next 6 months.

Arterioportal fistulas have been traditionally classified based on their location in extrahepatic and intrahepatic areas and based on whether they are hemodynamically significant.5 The hemodynamic significance of an APF is defined by the premature opacification of a portal vein or its first-order branch on arterial phase images with or without Doppler changes.6 Such hemodynamically significant APFs are extremely rare in liver transplant recipients, with a reported incidence of 0.2%.7 Arterioportal fistulas have been most commonly described in the setting of iatrogenic vascular injury secondary to percutaneous transhepatic procedures.8 Interestingly, this represents a paradox in the setting of liver transplant. Arterioportal fistulas, especially those requiring intervention for clinical significance, have been reported more frequently in the nontransplanted liver than in the transplanted liver, although the latter undergo numerous percutaneous procedures and are under constant imaging surveillance.5

Even in cases reported in a transplanted liver, of 13 APFs, 85% had clearly described prior biopsies (with or without percutaneous transhepatic cholangiography).7,9-11 In this setting, our case represents a unique case of a hemodynamically significant APF in a transplanted liver in which there was no antecedent iatrogenic cause that could have resulted in the formation of the APF. Moreover, the left-sided APF could not be explained by the right lobe transjugular liver biopsy done in our patient.

Most APFs, hemodynamically significant or not, are asymptomatic. Those that are symptomatic usually present with features of portal hypertension, pain, sepsis, hemobilia, biliary obstruction, and, rarely, pulmonary hypertension.5 A review of the literature on the symptomatology of APFs showed that the most common presentation (73%) was graft dysfunction with abnormal liver function tests (LFTs) only. Other common symptoms at presentation were gastrointestinal bleeding (45%, with the most common being hemobilia) and abdominal pain (36%).7 Of patients who presented with features of graft dysfunction (8 of 11), 5 had abnormal LFT alone and 3 had abnormal LFT complicated with ascites. Our case was unique because the patient presented with ascites, which can be explained due to the development of acute onset portal hypertension. Although abnormal LFTs have been described, a peak rise in serum bilirubin up to 21 mg/dL has not been described in the literature to the best of our knowledge and remains an intriguing question in this case. A possible explanation could be the development of bilio-venous communication that resolved after embolization.

The gold standard radiological modality to diagnose APFs is catheter-directed DSA since APFs are small. Other modalities include contrast-enhanced CT or magnetic resonance imaging and Doppler ultrasonography, which are extremely specific for determining hemodynamic significance but may miss the small APFs.12 Doppler ultrasonography findings characteristic of APFs include visualizing a focus of turbulence at the site of the APFs, reduction in arterial resistive indices, and reversal of flow with or without arterialization of venous flow in the receiving portal vein.7,12 Hemodynamic significance is defined by identifying the portal venous findings in the main portal vein of the hepatic graft or its first-order branch.7,12 In our case, the combination of a DSA with characteristic findings on Doppler scan was conclusive to establish the diagnosis.

Conventionally, only symptomatic APFs need to be managed, which can be either by surgical modalities or by an endovascular approach.7 However, it is not always straightforward to determine the APFs’ significance, especially in the posttransplant setting. When it presents as graft dysfunction and LFT abnormalities, whether symptomatology is due to APFs or other causes is difficult to determine, since such abnormalities may be nonspecific or multi­factorial in the posttransplant setting. In this regard, some authors have advocated a “diagnostic therapeutic” approach to the problem, which involves fixing the APF by a surgical or endovascular approach to ascertain whether the dysfunction is relieved.5,12 Historically, surgical approaches involving ligation of the involved hepatic artery segment, hepatic graft segmen­tectomy, lobectomy, and retransplant have been used in the management of APFs.13,14 However, with the advent and progress of endovascular therapy, the primary modality for management of APFs is endovascular embolization.11,15 The literature suggests that endovascular management of APFs has an appreciable overall efficacy and safety with technical success rate of 63% to 77%. Less than one-fourth require more than 1 session to achieve complete resolution.7 In our case, a single session of transcatheter coil embolization led to resolution of symptoms, and the patient remains symptom-free 6 months after the procedure.

Arterioportal fistulas are uncommon after liver transplant and are more common in the setting of an established iatrogenic vascular injury. Graft dysfunction with liver function abnormalities are the most common presentations, however, severe liver injury has not been reported. Management with appropriate imaging and an early endovascular approach are safe and effective in the management of such APFs. 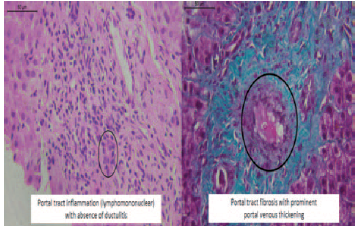 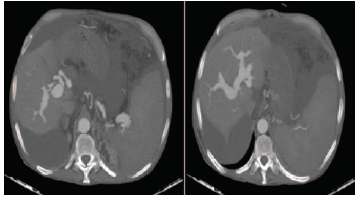 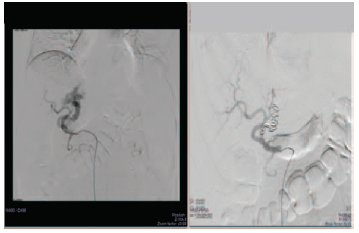