From the beginning of liver transplant implemen­tation, biliary anastomosis has been considered its weakness. An anastomotic bile leak is the most frequent cause of bile in the peritoneum (choleperitoneum) after liver transplant but not the only one. Here, we report a 58-year-old man with hepatitis C virus-related cirrhosis who had orthotopic liver transplant due to presence of hepatocellular carcinoma. During the immediate postoperative period, bile leak was diagnosed on trans-Kehr cholangiography. Contrast extravasation was observed on the graft’s cystic duct, and no contrast flow into the native biliary tract was demonstrated. Surgical intervention was required after endoscopic management failure. Bile leak through the cystic duct was repaired, and a Roux-en-Y bilioenteric diversion was performed. Biliary complications can significantly increase morbidity and mortality after liver transplant. Anastomotic bile leaks are the most frequent; however, other locations must not be dismissed as possible origins of leak. It is mandatory to consider underlying hepatic artery complications as thrombosis or stenosis. Treatment will depend on the leak origin, which are most times accessible to endoscopic retrograde cholangiopancreatography. However, other locations and the different treatment options must also be considered. It is also necessary not to forget the influence of bile leaks on biliary stenosis development in the long term and its contribution to increased patient morbidity and mortality.

Biliary anastomosis has been considered a weakness of liver transplant since its implementation. However, although biliary anastomosis as the site of a bile leak is the most frequent and therefore the most expected cause, it is not the only cause of bile in the peritoneum (choleperitoneum) in transplant patients.

A 58-year-old male patient with hepatitis C virus-related liver cirrhosis underwent orthotopic liver transplant for hepatocellular carcinoma. Donor and recipient selection was performed by the Spanish National Transplant Organization, an institution under the Spanish Ministry of Health. The recipient was assigned an organ from an anonymous deceased donor. Donor surgery was performed by surgeons from another institution, who also performed a cholecystectomy after liver graft removal.

For liver transplant, a standard procedure was conducted, using the piggy-back technique. Biliary reconstruction was performed with choledochocho­ledochostomy and T-tube placement, during which a preexisting decreased diameter in the patient’s common bile duct was identified. No further complications were found during choledocho­choledochostomy. On day 3 posttransplant, blood tests revealed an increase in cholestatic liver enzymes. Doppler ultrasonography was conducted, which ruled out vascular complications. Trans-Kehr cholangiography showed contrast extravasation through the graft’s cystic duct, without passage into the native common bile duct. An emergency endoscopic retrograde cholangiopancreatography (ERCP) was conducted, which did not achieve correct biliary cannulation.

The patient required surgical revision. Intra­operatively scarce bile was observed in the Morrison space, with intact biliary anastomosis and correctly placed T tube. Cholangiography was performed, as usual, injecting contrast through the Kehr catheter. This allowed contrast leak to be observed through the graft’s cystic duct stump on cholangiography. After that, surgical revision was carried out. Serum saline was injected trans-Kehr during the surgical intervention to verify the cholangiography findings and to identify the origin of the leak. Primary suture of the defect was performed (Figure 1). An intraoperative cholangiography showed no other points of leakage and showed contrast passage into the native common bile duct and duodenum, using augmented pressure due to bile duct diameter discrepancy (Figure 2). Previous failure of endoscopic management and the reduced diameter of the native bile duct resulted in need for biliary bypass surgery with Roux-en-Y hepaticojejunostomy.

Liver transplant is the standard treatment for end-stage liver disease of any cause. The most frequent causes of liver transplant are alcohol-related and hepatitis C-related cirrhosis, which have increased the frequency of orthotopic liver transplant for hepatocellular carcinoma.1

Despite the previously mentioned advances, biliary-related complications are still considered the “Achilles heel” of orthotopic liver transplant, contributing to increased morbidity and costs and risk of allograft failure.3-5 The most frequent complications are bile leak and anastomotic stenosis, which arise between 1 and 3 months after transplant.3,6

Bile leak occurs in 2% to 25% of cases,4,6,7 typically shows an early-onset pattern, and more frequently occurs at the anastomosis level. Clinical features are not specific and usually are masked due to the use of immunosuppressant drugs. Worsening signs in the immediate postoperative period include abdominal pain, fever, ascites, and other signs of primary allograft dysfunction. These signs must alert the clinician to establish the cause and promptly start the necessary therapeutic approach.7-9

Doppler ultrasonography is the first-line diag­nostic tool because of the well-known association between hepatic artery stenosis or thrombosis and biliary complications. If a T tube is placed, trans-Kehr cholangiography can confirm diagnosis. The most frequent origin is biliary anastomosis or the trans-Kehr cholangiography point of insertion. Other origins of bile leak are cystic stump and liver transection surface in split technique.10

Treatment depends on the fistula origin. In our patient, sphincterotomy and biliary drainage with stent placement via ERCP were performed. In other patients with the same complication, an ECRP with sphincterotomy and stent placement would be the optimum management; however, in our patient, biliary cannulation was not possible and a surgical intervention was required to prevent septic complications. The need for biliary anastomosis reconstruction due to leakage or complete dehiscence is infrequent. In these situations, it is recommended to perform a hepaticojejunostomy, once septic complications are considered and solved.10 The need for biliodigestive derivative surgery in our patient was due to a discrepancy in the bile ducts and the previously confirmed complex endoscopic approach for possible later complications.

At present, biliary complications still occur and can be a weak point of orthotopic liver transplant. The most frequent biliary complications include bile leak and stenosis. Biliary fistula incidence has recently decreased, and treatment is feasible and effective with ERCP. However, when the source of the bile leak is not the site of anastomosis, other therapeutic options should be considered. It should also be considered that an endoscopic approach may result in development of long-term biliary strictures, contributing to morbidity within these patients.

From the Division of Hepatobiliary Surgery and Liver Transplant, Department of Surgery, Ramón y Cajal University Hospital, Madrid, Spain
Acknowledgements: The authors have no sources of funding for this study and have no conflicts of interest to declare.
Corresponding author: Ana Puerta Vicente, C/ Rafael Bergamín 5 portal i 4D, 28043 Madrid, Spain
Phone: +34 646635053
E-mail: anapuertavicente@gmail.com 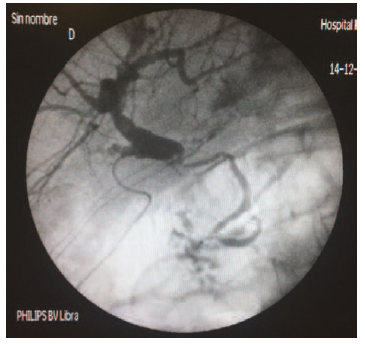