Wiskott-Aldrich syndrome is a rare primary immuno­deficiency disorder that is characterized by a triad of microthrombocytopenia, eczema, and recurrent infections. Progression to end-stage renal failure is common in survivors due to immunoglobulin A nephropathy. We describe the case of a 24-year-old male with Wiskott-Aldrich syndrome. The patient had previous hematopoietic stem cell transplant and was on hemodialysis due to end-stage renal failure. He subsequently underwent living-donor renal transplant from his mother as the donor. This is only the fifth case of renal transplant in a patient with Wiskott-Aldrich syndrome in the world. In all cases, the perioperative management of hemostatic function has been crucial. We used thromboelastography to guide our hemostatic decisions rather than platelet count, thus reducing exposure to unnecessary platelet transfusions and without increased bleeding risk. Our patient had an uneventful course after living-donor kidney transplant.

Wiskott-Aldrich syndrome (WAS) is a rare X-linked primary immunodeficiency disorder that is charac­terized by a triad of microthrombocytopenia, eczema, and recurrent infections.1 If not treated with hematopoietic stem cell transplant in infancy or childhood, patients with WAS will die from intra­cerebral bleeding, severe infections, or lymphoma.2 Progression to end-stage renal failure (ESRF) is common in survivors, with ESRF secondary to immunoglobulin A nephropathy. Although hemo­dialysis is an option, kidney transplant is the best choice. However, it is often not favored by transplant centers due to established immunodeficiency and the tendency for bleeding in patients with WAS.2,3

Reports of renal transplant in this patient group are scarce.3-8 Here, we report the fifth case in the literature. In all cases, perioperative management of hemostatic function is crucial.3

Our patient, a 24-year-old man with WAS, had previously undergone successful hematopoietic stem cell transplant. We used viscoelastic point-of-care testing to assist with diagnosis. In addition, we used thromboelastography to guide hemostatic decision making rather than platelet count, which reduced exposure of the patient to unnecessary platelet transfusions and decreased bleeding risk.

At presentation to our renal transplant unit, the patient was on hemodialysis due to ESRF. Our multidisciplinary transplant planning team advised administration of prophylactic platelet infusion before transplant to increase platelet count to 80 to 100 × 109/L. On the morning of the transplant procedure, the baseline platelet count was 20 × 109/L, and a pool of cytomegalovirus-negative irradiated platelets was transfused. Repeat platelet count showed an increase to 54 × 109/L. Thromboelastography was performed, which revealed near normal clot strength as described by the maximum amplitude (MA). Citrated native MA was 43.6 mm (reference range, 44-65 mm), and citrated native fibrin MA was 16.5 mm (reference range, 14-24 mm). Anesthesia was induced, invasive lines were inserted, and transplant surgery commenced.

A noticeable ooze at the site of internal jugular venous puncture prompted administration of a second pool of platelets and tranexamic acid, after which platelet count increased to 66 × 109/L. Throm­boelastography MA was within normal parameters (MA of 53.9 mm). The surgical field, platelet count, and viscoelastic clot strength were monitored intraoperatively. The transplant procedure was uneventful with minimal blood loss (200 mL). The patient required no further allogenic products, despite persistently subtarget platelet counts (Figure 1).

Our use of thromboelastography enabled global assessment of whole blood hemostatic potential before, during, and after transplant in a patient with known congenital microthrombocytopenia under­going renal transplant. Despite absolute platelet counts below suggested targets, we were able to demonstrate favorable clot strength with MA within normal parameters and could rationalize platelet transfusion. Had platelet count been used to guide transfusion, the patient would have received a greater platelet load. This patient had been receiving dialysis via a tunnelling catheter, which was removed based on his thromboelastography results rather than platelet count with no postoperative bleeding.

Platelets are a scarce and costly resource that convey inherent morbidity and mortality. Therefore, perioperative clinicians should use platelets judiciously and explore appropriate endpoints to guide transfusion. Our study agrees with other clinical contexts in which viscoelastic assessment of coagulation, rather than use of conventional laboratory tests, resulted in reduced allogenic product requirements without increasing bleeding or complication rates. 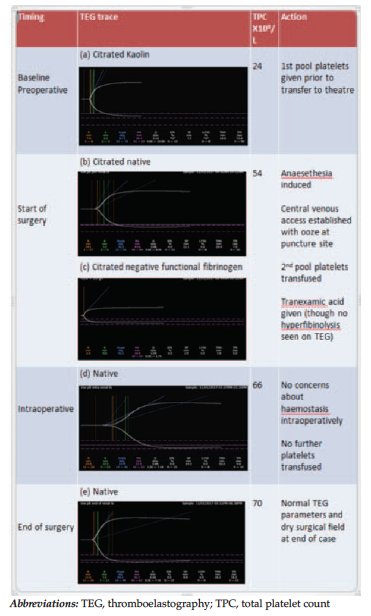