Materials and Methods: This study included retrospective data of 95 consecutive donors in a transplant center who were undergoing donor nephrectomy.

Results: Donor demographics and clinical characteristics were generally similar between treatment groups. There were fewer female donors in the finger-assisted open donor nephrectomy treatment group (70.5% vs 29.5%; P = .003), but median body mass index was similar between groups (28 vs 26 kg/m2; P = .032). Patients who received laparoscopic donor nephrectomy had longer operative duration (3.5 vs 1.2 h; P < .001), longer combined length of incision (6 vs 5 cm; P = .001), and shorter median hospital length of stay (3 vs 4 days; P < .001). A left nephrectomy was preferred in both groups. Minor postoperative complications occurred less often in the finger-assisted open donor nephrectomy group (14.7% vs 31.6%; P = .0094). Donors who received laparoscopic nephrectomy had lower glomerular filtration rate at 1 year after donation (60 vs 89 mL/min/1.73 m2; P < .001) than donors who received finger-assisted nephrectomy. However, recipients of donors of both procedures had similar glomerular filtration rate at 1 year after transplant (65 vs 69 mL/min/1.73 m2; P = .5).

Conclusions: Our study demonstrated that finger-assisted open donor nephrectomy is a successful and safe alternative versus laparoscopic donor neph-rectomy, providing favorable results for patients in terms of complications and outcomes.

Kidney transplant is the best treatment option for patients with end-stage renal disease.1 In the United States, approximately 19 000 kidneys are trans-planted each year, with close to 6000 of these donated from living, healthy individuals.2 Similarly, in the United Kingdom, approximately 3000 kidneys are transplanted each year, with close to 30% of these from living donors. The use of kidneys from living donors has emerged as an ideal surgical treatment for end-stage renal disease and a way to attenuate the persistent organ crisis, providing excellent outcomes and a relatively safe procedure for the donor.3-5

Numerous studies have shown better outcomes with living-donor versus deceased-donor kidney transplants with regard to long-term patient and graft survival.6 However, to minimize morbidity and to maximize the safety of the procedure, improve-ments in surgical techniques continue to be targeted by innovative surgeons.7 Laparoscopic donor nephrectomy (LDN) is the preferred technique for living kidney donations at most transplant centers and has become standard of care in the United States.8 Advantages of LDN include decreased length of hospital stay, faster return to normal life, and an equal safety profile versus open nephrectomy.9 However, LDN had been associated with longer surgical time and warm ischemia time than the traditional open approach, but this has not been associated with development of short-term consequences.10 Despite the perceived advantages of the laparoscopic approach, some centers in Europe and worldwide elect to use the traditional open approach for living-donor nephrectomy.11

Recently, more innovative techniques with modified approaches to open nephrectomy have been described, including finger-assisted open donor nephrectomy (FAODN).12 The use of a smaller incision and less muscle damage can potentially lead to better cosmetics, less complications and pain, and faster recovery compared with the traditional open approach, while not increasing the operative duration and warm ischemia time as much as the total LDN approach.13,14 So far, a consensus on the best surgical approach for living kidney donation has not been reached. In this study, our aim was to compare outcomes between FAODN and LDN in living donors and their recipients.

Laparoscopic donor nephrectomy
Laparoscopic donor nephrectomy was performed at the University of Virginia. All procedures were performed by a team of either 2 attending surgeons specializing in solid-organ transplant or an attending surgeon and a transplant fellow who had completed a general surgery residency program. Laparoscopic donor nephrectomy was performed mainly as a pure laparoscopic procedure using a 4-port transperitoneal access. A pneumoperitoneum of 15 mm was routinely used. Renal arteries were secured with GIA Endo-TA 30 multifire 2.5-mm sutures (Covidien AutoSuture, Dublin, Ireland). For right-sided LDN, the renal vein was also secured with Endo-TA 30 multifire 2.5-mm sutures (Covidien AutoSuture). For left-sided LDN, the left renal vein was typically secured and transected with an Endo GIA TM 45-mm articulating vascular/medium loading unit stapler. Kidneys were extracted via a Pfannenstiel incision of approximately 6 cm in length and subsequently flushed with ice-cold University of Wisconsin solution.

Finger-assisted open donor nephrectomy
All FAODN procedures at Imperial College and BUPA Cromwell Hospital were performed by a team of consultant and fellow surgeons. This approach has been previously described.15 Briefly, patients were placed in the lateral decubitus position, with the table maximally flexed. A 4-cm transverse incision was made anterior to the tip of the 11th rib, dividing all muscle layers and the lumbodorsal fascia. Two Hakim retractors (Bolton Surgical, Sheffield, UK), with intrinsic light sources (designed for the purpose of this procedure), positioned superiorly and medially, provided exposure for the dissection (Figure 1). Gerota’s fascia was incised longitudinally. Care was made to preserve the periureteric tissue, to obtain maximum length of the ureter, which would be suitable for reimplantation. The dissected ureters were encircled with a vessel loop and divided using the ETS-FLEX endoscopic articulating linear vascular cutter (Ethicon, Inc., West Somerville, NJ, USA). Dissection of the upper pole followed using the Harmonic scalpel (Ethicon Endo-Surgery, Cincinnati, OH, USA). Capsular attachments were then divided, beginning at the anterior and posterolateral margins before freeing of the upper pole. The upper pole was mobilized first to prevent further upward migration of the kidney toward the pleura. Next, the vascular structures were exposed. The renal artery and vein were isolated and freed from the surrounding lymphatics and encircled with vessel loops.

They were individually divided using a reloadable ETS-FLEX vascular stapler (Ethicon, Inc.). The wound beds were inspected, and meticulous hemostasis was achieved. Closure was achieved in 3 layers using monofilament absorbable suture. The skin was closed with an absorbable subcuticular suture. The final median length of the incisions was 4 cm.

In this multicenter, retrospective data analysis of 190 living kidney donors across a similar timeframe, we aimed to correlate 2 different surgical approaches with donor outcomes and recipient allograft function at 1 year postdonation. As minimally invasive techniques continue to develop, it is important to compare different surgical alternatives in terms of donor experience, expenses, efficacy, and safety.16 Safety and donor outcomes are paramount, as living donors are healthy individuals undergoing voluntary surgery to improve quality of life of another person.17 Although LDN has become the procedure of choice for living kidney donations in most areas, several centers across the world offer other surgical approaches, including mini-open donor nephrectomy, as it has been shown to have similar outcomes and several advantages over the standard flank incision.18

The literature suggests that LDN results in less intraoperative estimated blood loss on average than open techniques because of better visualization and dissection of the hilar structures, leading to reduced vascular complications commonly associated with open techniques.19 The FAODN procedure overcomes the smaller working space and limited view offered by the mini-flank incision with the use of Hakim retractors with an integrated lightening system, allowing dissection of the hilar vessels without increased risk of vascular damage. In our study, differences in rates of blood transfusions that occurred between the FAODN and LDN groups were found to be statistically insignificant. The intraoperative complication rate of LDN has been reported to range from 0% to 35%, which is less than in patients who undergo open approaches.20 In contrast, other authors have reported similar or opposite trends in intraoperative complication rates among LDN versus open techniques.21,22 In our study, we found that estimated blood loss and other intraoperative complications occurred with similar frequencies with LDN and FAODN.

In our series, 2 laparoscopic nephrectomies were converted to open nephrectomy to better secure the renal hilum in donors with difficult vascular anatomy. Rates of conversion from LDN to open donor nephrectomy have been reported to range from 0% to 15% and are usually due to bleeding or other life-threatening events.23 In our population, the overall frequency of minor postoperative wound complications was significantly lower in the FAODN group (14.7% vs 31.6%; P < .01). Despite the shorter hospital stay, the higher cost of surgical equipment, and discardable material needed, complications with the laparoscopic technique may lead to a higher overall cost compared with the FAODN technique. Although there is a higher upfront cost to a laparoscopic approach, this does not take into account the improved savings in terms of quicker recovery and shorter return to work, which have been previously shown.24 In our study and due to data from different centers and countries, it was not possible to properly assess hospital costs; therefore, further research is warranted. Nanidis and colleagues similarly demonstrated that LDN resulted in a shorter hospital stay by 1.58 days versus open donor nephrectomy and also described a signi-ficantly faster return to work after LDN by 2.38 weeks.25 Another disadvantage of LDN that is widely acknowledged is longer operative time,21 although this can change with surgeon experience and may vary in different transplant centers. The goal of the procedure is to acquire the organ with the least amount of ischemic injury, as reflected by warm ischemia time, to ensure proper functioning of the allograft in the recipient.

In our study, we also found a significant difference in operative procedure duration between the LDN and FAODN groups (3.5 vs 1.2 h, respectively; P < .001). In our population, 1-year postoperative GFRs in donors who had LDNs were lower (60.0 vs 89.0 mL/min/1.73 m2; P < .001). However, recipients of LDN and FAODN groups experienced similar short-term function (defined as delayed graft function) and GFR at 1 year after transplant (65 vs 69 mL/min/1.73 m2; P = .5). Postoperative donor complications are rare but have been described, including the risk that the donor’s remaining kidney function may decline over time.26 Longer follow-up is needed to determine whether there are long-term outcomes that correspond with these different surgical approaches.

Our results demonstrate some advantages of FAODN versus LDN without compromising length of incision and cosmetics. These include shorter operative time, reduced estimated blood loss, less intraoperative and postoperative wound com-plications, and better donor renal function in the first year postdonation.

As a retrospective analysis comparing 2 surgical procedures at 2 different institutions in different countries, there are clear limitations inherent to this study. Baseline characteristics including sex and BMI were different between groups, which could be due to differences in individual surgeon preference, institutional standards, and population of potential donors. We did not have data on recipient immunologic characteristics and their differences between the 2 groups, which may have had an impact on creatinine levels at discharge or short-term outcomes. Another drawback of our study was the lack of assessment between groups with regard to cost-effectiveness. Although FAODN by nature is simple and does not require sophisticated surgical instruments versus LDN, financial implications of both groups need to be studied.

We found FAODN to be a successful alternative to LDN. It appears to provide living kidney donors with similar or favorable outcomes in terms of complications and operative duration, does not show differences in outcomes of recipients, and provides better renal function in donors at 1 year post-donation. 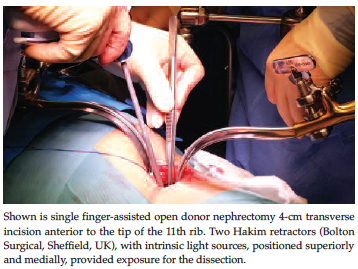 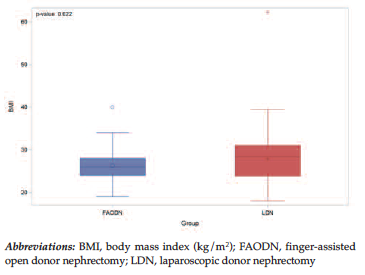 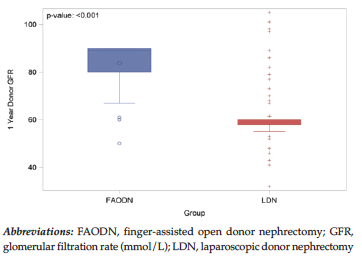 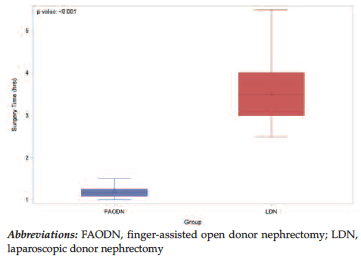 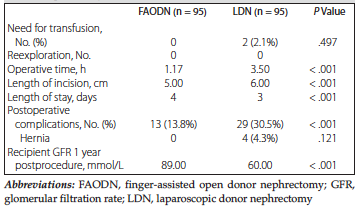