Objectives: Corticosteroids are fundamental to immunosuppression in kidney transplant but have significant side effects, generating interest in steroid-sparing immunosuppression regimens. We studied corticosteroid withdrawal on graft outcomes and comorbidities to study individualized approaches for immunosuppression. This is the first study of its kind in our ethnically distinct population.

Conclusions: Early steroid withdrawal in selected transplant recipients is a viable option for immuno­suppression, with no compromised graft function or survival shown in our cohort. Given the significant impact of weight gain, blood pressure, and serum lipids on recipient morbidity and mortality, a larger study is warranted.

Corticosteroids have been the mainstay of immuno­suppression in kidney transplant since the very beginning. Although corticosteroid immunosup­pressant properties are indisputable, there are many drawbacks, such as inducing or worsening diabetes, hypertension, obesity, lipid abnormalities, predisposing to osteopenia, growth retardation, infection, and impaired wound healing. There has been growing interest in restricting the use of corticosteroids in transplant by adopting various steroid-sparing immunosuppression (SSI) regimens.1

The results of studies employing SSI regimens, however, have not been entirely convincing, partic­ularly regarding possible advantages in reducing posttransplant recipient morbidities, which has hindered their widespread use.2,3 However, corticosteroids remain an appealing choice in patients who have low immunological risk or in whom side effects of corticosteroids are anticipated to be more damaging, such as in patients with preexisting diabetes, cardiovascular disease, or obesity and in children.4,5

In the present study, we compared the safety and benefits of early withdrawal of corticosteroids in a carefully selected group of renal transplant recipients versus a control group who continued to receive maintenance corticosteroids. Most prior studies have primarily focused on immunological consequences of steroid-based immunosuppression (SBI) versus SSI regimens and have not fully explored the impact on recipient comorbidities that can profoundly affect quality of life and possibly survival. We also studied the impact of corticosteroid withdrawal on graft outcome and comorbidities to help develop individ­ualized approaches for selecting immunosup­pression. This is the first study of its kind in our ethnically distinct population.

Our study analyzed 103 consecutive patients of Saudi origin undergoing renal transplant in our unit during 2014-2018. One patient, who had primary graft failure, was excluded.

Of the 102 patients, 32 did not receive oral steroids after induction immunosuppression (SSI), and the remaining 70 received the standard SBI. A combination of factors was considered in patient selection for SSI, such as age, body mass index (BMI), diabetes, HLA mismatches, panel reactive antibody (PRA) positivity, prior transplant, and donor type (living or deceased; all living donors were first-degree relatives). Induction immunosup­pression was similar in the 2 groups, comprising polyclonal-depleting antibody (antithymocyte globulin [ATG]; Sanofi-Aventis, Saudi Arabia) at a mean dose of 5.5 ± 1.3 mg/kg in SBI, and 5.7 ± 1 mg/kg in SSI, in 4 to 7 doses, and methylprednisolone at 500 mg on day 0 and 250 mg on days 1, 2, and 3. The maintenance immunosuppression in SBI was oral prednisolone (30 mg tapered to 5 mg over 6 weeks), tacrolimus, and mycophenolate mofetil (CellCept; Genentech, San Francisco, CA, USA). In SSI, corticosteroids were not given after induction with methylprednisolone was completed. The dosages of tacrolimus and mycophenolate mofetil were similar in both regimens.

Statistical analyses
Statistical analyses were done with SPSS software (SPSS: An IBM Company, version 21, IBM Corporation, Armonk, NY, USA). Numerical data were described as means and standard deviations, and categorical data were shown as absolute numbers and percentages. Mann-Whitney U test was used for numerical data and Fisher exact test for categorical data. For the cohort, relative risks (RR) for adverse events, graft dysfunction, and high SC were calculated. P < .05 was considered significant for difference between the groups.

Table 1 shows that, compared with the SBI group, patients in the SSI group were older, had higher mean BMI, more favorable HLA matching and PRA profile, and most were recipients of a first transplant from living donors. Mean follow-up of ~ 2 years was similar in the 2 groups.

The percentage of recipients who gained weight was significantly higher in the SBI group than in the SSI group (67% vs 34%) (P = .002). The subgroup analyses surprisingly showed poorer blood sugar control in the SSI versus the SBI group, as reflected by a higher mean HbA1c. Better control of BP and serum lipids was observed in the SSI group, although this difference was not statistically significant. In the cohort analysis, RR for adverse events or graft dysfunction was higher with PRA positivity, recipient age < 40 years, and deceased donors (Table 3). HLA mismatches also posed a high RR for posttransplant SC (Table 3).

Immunosuppression is a double-edged sword and needs delicate balance to maximize its benefits for renal transplant recipients. Strong immunosuppression may provide a better safeguard for the graft against immunologically driven undesirable effects, but its associated side effects may ultimately be detrimental for graft or patient survival. Both late allograft failure as result of chronic allograft nephropathy and death with a functioning graft are invariably related to the long-term side effects of immunosuppression, and steroids are the main culprits.6 Minimizing the corticosteroid dose may simultaneously prolong graft survival and patient survival by reducing posttransplant morbidity and mortality due to its adverse effects.

The protocols employed for SSI have varied from complete steroid avoidance, to early withdrawal within a week, to late withdrawal after 6 months to 1 year.2 Complete steroid avoidance and late corti­costeroid withdrawal have resulted in unacceptably high incidence of AR and graft failure despite ATG induction.5,7 Early corticosteroid withdrawal, after the completion of induction immunosuppression, has so far been found to be reasonably safe and is currently the widely accepted approach.3,5,8,9

Studies that compared SSI with SBI regimens have shown conflicting results related to the heterogeneity of data, different eras of studies, and variability in immunosuppression protocols and follow-up duration.2 In studies where recipients received cyclosporine, a high incidence of AR and graft failure was reported with SSI regimens.5,10 However, when ATG or interleukin-2 receptor antibodies induction was used and cyclosporine was replaced by tacrolimus, the incidence of AR, graft failure, and patient survival with SSI was similar to standard SBI.3,5,11,12,13 In some studies involving low-risk recipients, a higher rate of AR was reported, but this did not adversely affect graft or patient survival.2,8 Recently, SSI has also been attempted in high-risk recipients, and a systemic review of these trials did not show increased incidence of AR or graft loss but did show decreased incidence of recipient death and diabetes with SSI use compared with SBI.14 In a review involving low-risk recipients, a significant risk of AR was observed with SSI during 5-year follow-up.15 Another such review showed an increased incidence of milder (Banff type 1B) AR with no significant effect on overall graft survival, incidence of diabetes, or recipient mortality with SSI use.2

The evidence favors SSI protocols for selected recipients based on a careful immunological risk assessment.16,17 We used established conventional parameters for risk stratification in our recipients.18,19 Despite identical risk profiles and immunosup­pression protocols, responses among different recipients were quite variable, indicating that this approach is also not ideal.5,16 Biochemical parameters may be more useful instead of clinical risk profile for patient selection, but this requires further study.20,21

In the SBI group, mean SC was significantly higher than in the SSI group, but this was more likely due to younger recipients and greater number of deceased donors than to type of immunosuppression used. This is reflected by high RR of graft dysfunction in this group.

Although the effects of SSI on graft outcomes, in terms of AR and graft and patient survival, have been widely studied, the benefits of SSI in terms of avoidance of corticosteroid-related side effects have not been widely or objectively assessed.3 Some studies that have considered corticosteroid-related side effects have focused on diabetes and dyslipidemia, overlooking other effects such as hypertension and body weight. In our study, we explored these areas, as we believe this information is vital for a valid risk-benefit analysis.

The most significant finding in our study was reduced tendency to gain weight after transplant in the SSI group compared with the SBI group (34.4% vs 67.1%, respectively; P = .002), a phenomenon that has been observed by other researchers.7,22 Posttransplant weight gain is quite common and is attributable to increased appetite and removal of dietary restrictions.23 This weight gain in turn could adversely affect graft outcome by contributing to diabetes, hypertension, and dyslipidemia. Reduction in weight gain is significantly advantageous for recipients, particularly for those who already have a higher baseline BMI.

We did not observe any benefit of SSI on blood sugar control. The mean HbA1c and the proportion of recipients with a high HbA1c was higher in the SSI group. This could be due to concomitant use of tacrolimus in all our recipients, which may have neutralized the benefit of corticosteroid avoidance. This contention is supported by studies that showed a lower incidence of posttransplant diabetes only in cases where tacrolimus was not part of the SSI regimen and cyclosporine was used instead.3

Consistent with the results of some other studies, we found a better control of posttransplant BP and dyslipidemia in the SSI group. Blood pressure was normal in 68.2% of patients in the SSI group versus in 57.2% of those in the SBI group, whereas serum cholesterol or triglycerides were high in 15.6% and 28.6% in the 2 groups, respectively. Although these findings are not statistically significant, our study may not be sufficiently powered to detect this difference; given the substantial benefits of reduced cardiovascular risk, the leading cause of death in recipients with a functioning graft, this warrants further study.

Our study has limitations of being a single-center study and having a relatively short follow-up period. The inferences drawn need to be further tested through larger prospective studies and with longer follow-up to accurately determine risks and benefits of SSI regimens.

Early withdrawal of steroids in selected transplant recipients is a viable option for immunosuppression, and our results show that this does not compromise graft function and survival. Early withdrawal of corticosteroids resulted in a statistically significant reduction in weight gain. There was a noticeable benefit in controlling BP and lipid abnormalities, which did not reach statistical significance but warrants higher powered study, given the significant impact of these factors on recipient morbidity and mortality.

From the 1Department of Nephrology and Transplantation, King Salman Armed Forces Hospital, Tabuk, Saudi Arabia; and the 2Department of Medicine, Abington Memorial Hospital, Abington, Pennsylvania, USA
Acknowledgements: The authors have not received any funding or grants in support of the presented research or for the preparation of this work and have no potential declarations of interest.
Corresponding author: Nadeem Ahmed, 1200 Old York Road, Philadelphia, PA 19001, USA
E-mail: n_ahmad_2000@yahoo.co.uk 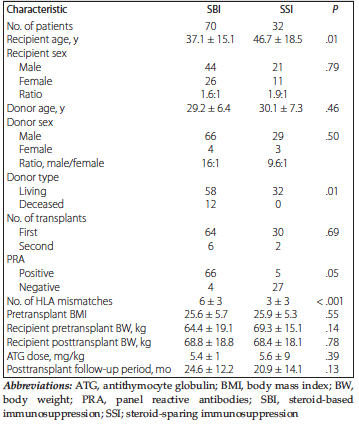 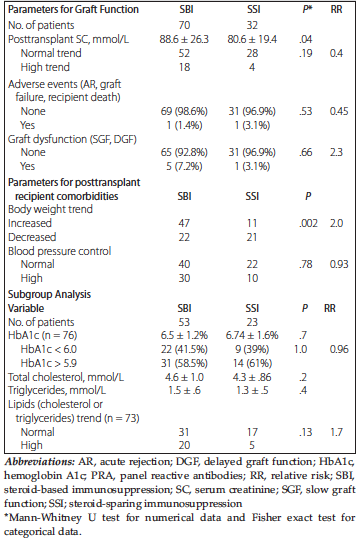 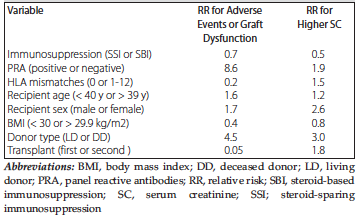