Few studies have described glucose metabolism in the immediate posttransplant period. Here, we report a 37-year-old female patient who had transient hypoglycemia after combined pancreas and kidney transplant for poorly controlled type 1 diabetes and renal failure. Although the patient’s blood sugar decreased from 420 to less than 120 mg/dL and the kidney demonstrated graft function immediately posttransplant, at 19 hours after transplant, the patient’s blood glucose decreased to below the normal range at a nadir of 59 mg/dL. When treated with intravenous dextrose, her blood glucose levels increased over 7 hours to 119 mg/dL but then again declined, appearing to follow a circadian rhythm, with hypoglycemia shown during early morning hours and then improving during the afternoon. This prompted treatment with a continuous infusion of 5% dextrose on day 2, resulting in blood sugar levels returning to normal by day 4 and discharge on day 6.

She has since remained euglycemic. The differential diagnosis of hypoglycemia immediately after kidney-pancreas transplant is wide. Indeed, after we excluded ischemia-reperfusion injury, impaired renal clearance, insulin-associated antibodies, and lack of pancreatic innervation, we believe that cause was most likely due to impairment of early glucose counterregulatory responses or delayed alpha cell function.

We report a case of transient hypoglycemia after simultaneous pancreas and kidney transplant in a 37-year-old female patient with poorly controlled type 1 diabetes and renal failure. The kidney and pancreas grafts were recovered from a 22-year-old brain dead donor. Arterial supply to the transplanted pancreas was via a standard arterial “Y” graft. The donor portal vein was anastomosed to the recipient’s inferior vena cava, allowing for systemic drainage of the endocrine pancreas. Exocrine pancreatic secretions were managed with enteric drainage. Within 6 hours of reperfusion, the recipient’s blood sugar decreased from 420 mg/dL to less than 120 mg/dL. Per anesthesia records, the pancreas was reperfused 56 minutes after skin incision, and the combined kidney-pancreas procedure lasted a total 4 hours and 15 minutes. Pancreas out-of-ice (anastomotic) time was approximately 20 minutes. After surgery, as for all kidney-pancreas recipients at our center, the patient received intravenous 0.45% normal saline at 30 mL per hour plus urinary replacements.

The patient’s kidney demonstrated immediate graft function after transplant. Her serum creatinine dropped from 7.03 mg/dL to 1.15 mg/dL between day 0 and postoperative day 4. The patient did not require dialysis after transplant. However, rather than remaining within the normal range (ie, 80-120 mg/dL), our patient’s blood glucose decreased to a nadir of 59 mg/dL approximately 19 hours after transplant. Hypoglycemia prompted treatment with intravenous dextrose. After treatment of her first hypoglycemic episode, blood glucose levels increased over 7 hours to 119 mg/dL before again declining. Hypoglycemic episodes appeared to follow a circadian rhythm (Figure 1). Hypoglycemia began during the early morning hours and improved during the afternoon. On day 2, she was started on continuous infusion of 5% dextrose.

Our patient’s amylase and lipase levels normal­ized within 72 hours of transplant. Ultrasonography of the transplanted pancreas showed appropriate arterial and venous waveforms. Fasting insulin (9.7 μIU/mL; normal range, 2.6-24.9 μIU/mL) and C-peptide (2.3 ng/mL; normal range, 1.1-4.4 ng/mL) levels on day 3 were within normal limits. The patient’s pretransplant C-peptide level was 0.4 ng/mL. Insulin autoantibody was negative. Dextrose infusion was discontinued on day 4 when her blood sugars returned to normal levels. She remained euglycemic through day 6, when she was safely discharged to home. Since discharge, the patient has remained euglycemic.

Hypoglycemia after pancreas transplant necessitates a wide differential diagnosis inclusive of insulin overproduction (or relative overproduction), anatomic causes, autoimmunity, malnutrition and/or aberrant production of glucose by the liver, and impaired glucose counterregulation.5,6 Although studies have addressed posttransplant hypoglycemia in patients who are remote from surgery, limited data are available to address glucose metabolism in the immediate posttransplant period.7,8

In the immediate posttransplant period, it is plausible that ischemia-reperfusion injury and/or islet cell death might lead to aberrant insulin release. Alternatively, for patients with poor kidney function, renal clearance of insulin may be impaired, leading to elevated relative levels of circulating insulin.

The venous drainage of the patient’s pancreatic allograft was systemic, which is potentially important because the liver clears more than 40% of insulin with first-pass metabolism.9 However, after decades of experience with systemic drainage, this is not thought to cause hypoglycemia. Generation of insulin-associated antibodies can also lead to hypoglycemia10; however, our patient did not produce such antibodies. Lack of innervation of the pancreas may also affect endocrine secretion. However, restitution of euglycemia by day 4 would argue against this hypothesis because it is unlikely that the pancreas became innervated by this time after transplant.11 Furthermore, acute malnutrition before transplant (eg, when there is a prolonged period of withholding food/fluids before surgery) may deplete hepatic glycogen stores, disallowing ready access to endogenous carbohydrates.

In the context of the available information, impairment of early glucose counterregulatory responses represents an attractive hypothesis for our patient. Indeed, a differential rate of return of insulin and glucagon production by the transplanted pancreas would potentially explain our patient’s findings. Such a diagnosis would be akin to “delayed graft function” of alpha cells. One way to confirm that normal counterregulatory responses have returned would be to administer an oral glucose tolerance test in the patient, after which glucagon and insulin levels could be measured.

Hypoglycemia due to early impairment of coun­terregulatory responses after pancreas transplant implies loss of glucagon function in the patient’s native pancreatic islets. Accordingly, alpha cell dysfunction is well known to occur in patients with long-standing type 1 diabetes.12 In addition to insulin, islets of the transplanted pancreas are known to produce glucagon.13 Pancreas transplant successfully restores physiologic responses, such as epinephrine and glucagon secretion as well as hepatic glucose production, in response to hypoglycemia. To determine conclusively whether glucagon deficiency was the cause of our patient’s hypoglycemia, the glucagon level would need to be measured. However, this test was not routinely available at our facility.

Early hypoglycemia after pancreas transplant is not well described in the literature. Endocrine control of blood sugar may be imprecise in the immediate posttransplant period. We observed that hypo­glycemia resolved spontaneously, much like delayed graft function of other transplanted organs. Ischemia, autoimmunity, aberrant hepatic glucose production, or impaired glucose counterregulatory responses may be involved. A deeper analysis of a larger series of patients with hypoglycemia after pancreas transplant would improve our understanding of this rarely reported condition.

From the 1Division of Transplant Surgery, University of Maryland, Baltimore, Maryland, USA; and the 2School of Medicine, Virginia Commonwealth University, Richmond, Virginia, USA
Acknowledgements: The authors have no sources of funding for this study and have no conflicts of interest to declare. The senior author thanks Dr. Jon Odorico for teaching him to safely perform a pancreas transplant.
Corresponding author: Joseph R. Scalea, 29 S. Greene St. Suite 200, Baltimore, MD 21201, USA
Phone: +1 410 328 0038
E-mail: jscalea@som.umaryland.edu 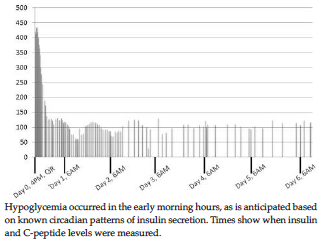