The anatomic variabilities in ducts of Luschka put patients at risk during hepatobiliary surgery. Clinically relevant bile leakage is the cause of 0.4% to 1.2% of complications of cholecystectomies, with almost one-third of complications caused by an inadvertent injury to the duct of Luschka. However, bile leakage from a duct of Luschka after liver transplant is rare, and only one previously published report has been found. Here, we report a case of a 67-year-old male patient who underwent liver transplant for cirrhosis due to hepatitis C virus infection. After transplant, the patient had a choleperitoneum caused by bile leakage from a duct of Luschka. The donor surgery had been performed by surgeons from another institution, and they had also performed the previous cholecystectomy. Fifteen days after surgery, a cholangiography showed bile leakage near the anastomosis. A new intervention was decided. After confirmation of the integrity of the anastomosis, methylene blue was injected through the Kehr’s tube, which escaped from a duct of Luschka. The duct was closed, and an intraoperative cholan-giography confirmed that the biliary tree was intact. After this intervention, a new bile leakage was observed, resulting in an endoscopic retrograde cholangiopancreatography scan and sphincterotomy. The Kehr’s tube was kept open until leak resolution. Although unusual after liver transplant, this com-plication should be considered in cases of bile leakage. The ducts of Luschka are difficult to see during cholecystectomy in the graft due to perivesicular edema.

The duct of Luschka was first described by Von Luschka, professor of anatomy in 1863. These ducts are small, accessory bile ducts (1-2 mm in diameter) that originate mainly in the right hepatic lobe, which is located close to the gallbladder bed. The ducts of Luschka are usually found within the connective tissue, most commonly in the center of the gallbladder bed, but they have also been described in the lateral peritoneal reflection. Less often, they are found passing directly into the wall of the gallbladder.

Knowledge of the anatomy of the biliary tree, with its well-known tendency for structural variations, is important for surgeons who must perform procedures in the right upper quadrant. Anatomic variations can put the biliary tree at risk during hepatobiliary surgery. In the era of laparoscopic cholecystectomy, the ducts of Luschka have gained increased clinical recognition.

A 67-year-old male patient underwent liver transplant for cirrhosis caused by hepatitis C virus infection. Donor and recipient selection had been conducted by the Spanish National Transplant Organization, an institution that is part of the Spanish Ministry of Health. The recipient was assigned an organ from an anonymous deceased donor. Our case patient had donor surgery performed by surgeons from another institution, who also had performed the cholecystectomy after liver graft removal.

A new cholangiography was performed, and contrast extravasation was shown around the bile anastomosis. It was decided to return the patient to the operating room and search for leakage at the anastomosis site. The anastomosis was intact; however, after methylene blue was injected through the Kehr’s tube, the fluid escaped from a duct of Luschka in the gallbladder fossa (Figure 1). The duct was closed, and an intraoperative cholangiogram was obtained to confirm that the biliary tree was intact, demonstrating duct of Luschka closure.

During the postoperative period, bile content appeared again in the drainage. A repeat cholan-giography showed persistence of bile leakage in an aberrant duct in the right hepatic lobe (Figure 2). The patient showed a good clinical condition; therefore, we opted to perform an endoscopic retrograde cholangiopancreatography (ERCP) and sphinc-terotomy. The T-tube was kept open until bile leakage resolution. The patient had a satisfactory course after this procedure; therefore, no other interventions were required. A third cholangiography was performed through the T-tube 8 weeks after reintervention. Because no more bile leakage was shown, the T-tube was removed.

Injury to the duct of Luschka can cause a cho-leperitoneum, biloma, or a subphrenic or subhepatic intra-abdominal abscess. Clinical manifestations of this complication can be mild, with nonspecific symptoms or abdominal pain with or without fever and symptoms of local or general sepsis. High bilirubin levels are uncommon in these patients.3

Management of this complication depends on the patient’s clinical condition. Developments in endo-scopic management could allow many patients to have endoscopic procedures, thus avoiding surgical intervention.

Another work analyzed the optimal time to perform an ERCP after bile leak. The overall success rates and adverse events after ERCP were not dependent on time between the procedure and the discovery of the bile leak. This suggests that ERCP in these patients can usually be performed in an elective rather than in an urgent manner.6 Percutaneous treatment is other option. In the case of leaks and fistulas, bile diversion with drainage is usually attempted to seal the fistulous tract.7

In a recent study that evaluated risk factors and outcomes of bile leak after liver transplant, the incidence of postoperative bile leak was 2.7% (n = 16). Sites of bile leak were identified as duct-to-duct anastomosis (n = 4), cholangiojejunostomy anastomosis (n = 2), and cut surface of the remnant liver (n = 1). However, the site of bile leak was not identified in 9 patients who received conservative management and who showed no obvious site of leakage with ERCP examination. No leaks from the ducts of Luschka were identified. Ten patients (65.5%) were treated with conservative management, and 6 patients ultimately required laparotomy. No differences in 1-year patient survival rate were shown between these 2 groups of patients; however, 2-year patient survival rate was significantly lower in those who had bile leaks.8

Although this complication is unusual after liver transplant, duct of Luschka leakage should be considered in cases of bile leakage. The ducts of Luschka are difficult to see during cholecystectomy in the graft due to perivesicular edema. Management of this complication depends on the patient’s clinical condition.

From Division of Hepatobiliary Surgery and Liver Transplantation, Department of Surgery, Ramón y Cajal University Hospital, Madrid, Spain
Acknowledgements: The authors have no sources of funding for this study and have no conflicts of interest to declare.
Corresponding author: Alberto Vilar Tabanera, Calle Talia 2 b Madrid, Spain 28022
Phone: +34 649397822
E-mail: alb.vilartabanera@gmail.com 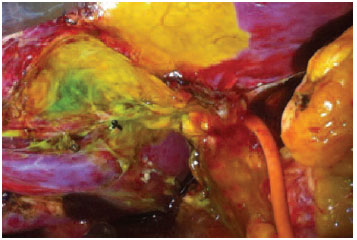 Figure 1. Methylene Blue Injected Through the Kehr’s Tube and Coming Out From a Duct of Luschka 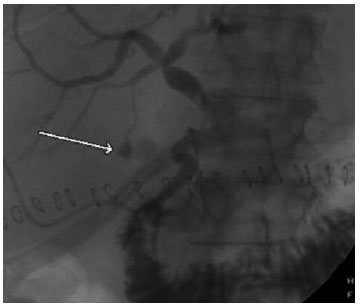 Figure 2. Cholangiography Showing Persistence of Bile Leakage in an Aberrant Duct in the Right Hepatic Lobe