Necrotizing fasciitis is a devastating soft tissue infection that causes progressive destruction of muscle and overlying subcutaneous fat. Presentation is variable, and often anesthesia or significant pain may occur before the appearance of bullae and skin necrosis. Outcomes, however, are dependent on rapid diagnosis for surgical debridement, and delayed surgical intervention is associated with increased mortality.1,2 Patients are treated with aggressive debridement and broad-spectrum anti-biotics in the intensive care setting and will require repeated surgical debridement until there is no further evidence of necrosis.

Our patient was a 50-year-old woman who had undergone hemodialysis for 25 years as a result of end-stage renal failure of unclear cause. Her medical history included superior vena cava stenosis, severe chronic obstructive pulmonary disease, atrial fibrillation, mitral stenosis, pulmonary hypertension, and pancytopenia. She was admitted for a renal transplant from a 31-year-old male brain-dead donor.

Our local protocol for superior vena cava stenosis avoids central venous access in the neck, to avoid the increased morbidity associated with facial and laryngeal edema secondary to fluid administration via such access. Therefore, a left femoral central catheter was placed preoperatively. Induction immunosup-pression was basiliximab and methylp-rednisolone, with maintenance immunosuppression with tacro-limus, mycophenolate mofetil, and pred-nisolone. Her surgery was uncomplicated, resulting in primary graft function. The central femoral line was retained postoperatively due to “difficult” peripheral access and ongoing intravenous fluid requirements. Her transplanted kidney had immediate function with excellent urine output; her creatinine level decreased to 60 μmol/L on day 4 posttransplant.

On day 5 posttransplant, the patient was noted to be in fast atrial fibrillation with a mild reduction of blood pressure to 92/60 mm Hg and reduction in urine output from approximately 100 mL/hour to 15 to 30 mL/hour. Digoxin and intravenous fluids were administered via the left femoral venous catheter, leading to clinical improvement. The patient began to complain of left thigh and groin swelling, but there was no erythema, and the cause was thought to be extravasation of intravenous fluids. The venous catheter was removed. Overnight, the patient developed erythema of the left thigh, with hypotension and tachycardia. The patient continued to deteriorate with fast atrial fibrillation, hypo-tension, and tachypnea. Her C-reactive protein level rose dramatically over a period of hours from 44 to 227 mg/L (Figure 1). Further venous access was secured, and the patient received resuscitation with intravenous fluids and antibiotics. The patient deteriorated further, requiring intubation, ventilation, and transfer to the intensive care unit.

The patient’s left thigh continued to swell and developed blistering. Review of the patient by a plastic surgeon led to the clinical diagnosis of atypical necrotizing fasciitis, and she immediately underwent emergency debridement. The clinical picture evolved quickly; by the time of the debridement, the left leg showed the typical appearance of necrotizing fasciitis (Figure 2). She underwent radical debridement of the left thigh, extending up to the abdomen. She required ventilation and inotropic support and received intravenous antimicrobial therapy with meropenem, clindamycin, and caspofungin. Unfortunately, the patient died within 24 hours of the debridement. Blood cultures and debrided tissue cultures confirmed a case of gentamicin-resistant E. coli necrotizing fasciitis.

Necrotizing fasciitis in renal transplant patients is a rare phenomenon, with only a handful of case reports in the literature. Monomicrobial necrotizing fasciitis (type 2) is classically associated with group A Streptococcus, and E. coli is rarely described as the causative organism.5 To our knowledge, this is the fourth documented case of E. coli necrotizing fasciitis in this type of patient. Tsai and associates reported a case in which a patient was admitted to hospital with a bacterial pneumonia, 16 years after transplantation.6 During hospitalization, he was treated for a bleeding duodenal ulcer and a rash appeared on the right leg. This spread quickly, and he developed bullae within 22 hours of the rash first appearing. The first fasciotomy was performed at the same time, and the patient survived. The second report is of a patient who developed E. coli necrotizing fasciitis 30 days posttransplant and 2 days after discharge.7 He presented with pain and a rash; in 24 hours, bullae developed and pain worsened. He underwent surgery the same day; although he recovered, the patient died of a viral pneumonia during the same admission. The final report is of a patient who developed Clostridium difficile diarrhea on day 10 posttransplant.8 By day 14, she had pain, bullae, and erythema of the right lower leg. The patient subsequently underwent a through knee amputation before being discharged for rehabilitation. Other documented causative organisms of necrotizing fasciitis in renal transplant include Streptococcus pneumoniae, Methicillin-resistant Staphylococcus aureus, Cryptococcus neoformans, Acinetobacter baumannii, mucormycosis, Streptococcus pyogenes, Candida albicans, Proteus species, Pseudomonas aeruginosa, Histoplasma capsulatum, Enterobacter cloacae, and Candida parapsilosis.7,8 There are now 24 reported cases of necrotizing fasciitis in renal transplant patients.

There have also been a number of reports of E. coli necrotizing fasciitis in immunocompromised patients. Three reports following liver transplant were associated with early infection, atypical presentation, and poor outcomes.9 In a case series of monobacterial E. coli necrotizing fasciitis, all 7 patients affected were immunosuppressed and affected in limbs, and all patients died.5

Our case shares similarities with the 3 previous reported cases of E. coli necrotizing fasciitis. Three of the 4 cases were in the immediate postoperative period. All cases occurred in the lower extremities and rapidly ascended the limb. Similar to previous reports, our patient presented atypically, with shock and then erythema, and the classical features of necrotizing fasciitis were late to develop.6,8 Rash was the initial presenting complaint in all reports.

The lesson to be learned from our case, as well as previous cases, is to always consider the diagnosis of necrotizing fasciitis early in this cohort of patients. Although extremely rare, it often presents atypically and may lead to a delay in diagnosis and life-saving treatment. Shock may be the only clue. Physical examination findings are reduced; therefore, all immunosuppressed patients should undergo a thorough skin examination when presenting as unwell. Our conclusions are however limited due to the rarity of these cases. It would be useful to delineate if there are specific risk factors that predispose a patient to E. coli as the source of infection and whether individuals are more vulnerable to specific strains.

Escherichia coli necrotizing fasciitis in renal transplant patients is, fortunately, extremely rare. Due to their immunosuppressed state, these patients are at increased risk of developing this potentially fatal condition and may be affected by uncommon pathogens. Atypical presentation may prevent prompt diagnosis and therefore delay life-saving treatment. It is crucial to perform a thorough external examination on all transplant patients if they become septic. A small area of erythema should be taken seriously, monitored closely, and acted upon promptly. 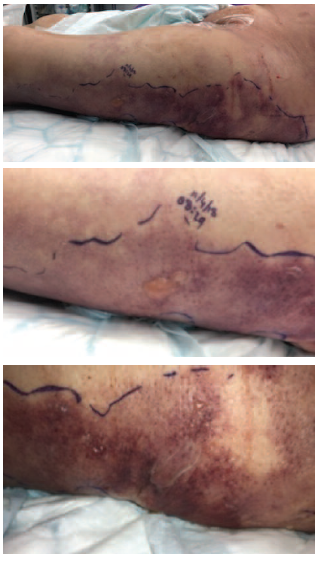