Objectives: The safety of living liver donors is considered a high priority. In this study, we aimed to highlight the incidence and risk factors of respiratory complications among living liver transplant donors at our institute.

Conclusions: Despite the low incidence of significant respiratory complications among our living liver donor cohort, close monitoring and early management are essential to achieve better prognosis, especially in donors older than 35 years or those with previous surgery.

In Egypt, living donors represent the only option for patients with end-stage liver disease who require liver transplant due to failure to implement legal deceased-donor liver transplant programs.1

Despite the widespread use of living-donor liver transplant (LDLT) with satisfactory results, there is still concern for healthy donors who undergo a complicated surgery for liver graft retrieval. Studies have shown increased numbers of cases of morbidity and mortality among living liver donors after hepatectomy.2,3 Recently, there are increasing reports about postoperative respiratory complications within this population.4,5 In this retrospective study, we highlighted the incidence and risk factors of respiratory complications among living liver donors in our center.

After approval of the study protocol by the research ethical committee of the Faculty of Medicine, Ain Shams University (code number: FMASU FAMSU R37/2018) and registration in the ClinicalTrials.gov database (registration number: NCT03862664), we retrieved medical records of 178 related donors who underwent hepatic lobectomy for liver transplant between January 2014 and December 2018 in Ain Shams Specialized Hospital. Our aim was to evaluate respiratory complications that occurred in living liver donors in the first 6 months postop­eratively.

Informed consent was obtained from all living liver donors after full explanation of the procedure. This was done on 2 occasions: the first time in the presence of another family member and the second time in front of the ethical committee. The donor was reassured that he/she had the right to withdraw at any time until just before the operation.

With regard to fluids given to the donor, we used a restrictive fluid strategy before graft removal to preserve the low positive central venous pressure (around 5 cm H2O) in order to decrease blood loss. Ringer acetate was mainly used as the solution. After resection and before the end of surgery, intravenous fluids were increased to restore the central venous pressure to between 6 and 12 cm H2O. Intraoperative blood loss was collected and salvaged by a cell saver machine and used when needed. Heparin 5000 IU was given intravenously to the donor before removal of the graft to avoid thrombosis in its vasculature.

All patients were extubated in the operating theater and admitted to the intensive care unit (ICU) immediately postoperatively.

Donors were admitted to the ICU at least overnight for monitoring. During the ICU stay, the nasogastric tube and Foley catheter were removed and early oral nutrition was encouraged. Postop­erative medications included prophylactic antibiotic coverage (cefepime 2 g every 12 h intravenously for the first day as a prophylactic measure together with intravenous metronidazole 500 mg every 8 h) and proton pump inhibitors in the form of intravenous pantoprazole 40 mg/24 hours as prophylaxis against stress ulceration.

Prophylactic measures, like intermittent calf compression during surgery and in the first 24 hours after surgery, were applied to reduce the risk of deep vein thrombosis (DVT). Standard DVT prophylaxis with low-molecular-weight (LMW) heparin was implemented by the second day if there were no contraindications. Chest physiotherapy and early mobilization were part of routine immediate postoperative care.

Sample size
Using the PASS program (NCSS, Kaysville, UT, USA) and setting the alpha error at 5% and confidence interval width of 0.1, we considered the previous results from Ulubay and colleagues,4 which showed that the incidence of respiratory complications among living donors was 8.5%. Based on this, the needed sample size was at least 124 cases.

Of 178 analyzed donors, 10 (5.6%) developed significant respiratory complications (SRCs) that were clinically evident. Table 1 presents the demographic characteristics of analyzed donors. All donors were related to their recipient: 125 (70.2%) were first-degree relatives and 53 (29.8%) were second-degree relatives. With regarding to donors with SRCs, all were first-degree relatives. All donors with SRCs underwent right hepatectomy. Donors with SRCs were nonsignificantly older. In addition, previous surgery was nonsignificantly more frequent among donors with SRCs. Logistic regression analysis identified age ≥ 35 years and previous surgery as the main risk factors for SRCs (Table 2). All cases of SRC were recorded during the first month postoperatively.

Two donors (1.1%) developed pulmonary embolisms. Both were male donors and nonsmokers without relevant medical or surgical history. Patients complained of sudden dyspnea, tachycardia, and chest pain. They were promptly diagnosed with elevated D-dimer, and pulmonary CT angiography revealed mild changes. Electrocardiogram and echocardiography results were normal. No patient deteriorated to respiratory or circulatory failure. There was no correlation between pulmonary embolism and the development of DVT. Both donors received the optimum anticoagulation therapy.

The most commonly encountered complication was pleural effusion, which represented 29.2% (n = 52) among the studied cases. Daily postoperative chest ultrasonography was done routinely for all donors. Different grades of pleural effusion were observed, with minimal grade in 15 donors (29.4%), mild grade in 29 donors (56.9%), moderate grade in 6 donors (11.8%), and severe grade in 1 donor (2.0%). Among donors with and without pleural effusion, there were significantly more female donors (42.3% [n = 22] vs 18.3% [n = 23]; P = .001). Logistic regression analysis identified female sex as a significant risk factor for effusion (odds ratio = 2.84; 95% confidence interval, 1.36-5.92; P = .006). Most of these donors were treated conservatively, and pleural fluid was spontaneously absorbed. Only 3 cases were clinically relevant (1.7% of all analyzed cases). These 3 donors were further examined with chest CT, and ultrasonographic-guided tapping of pleural effusion was performed.

Four donors (2.25%) had chest infections, manifested by cough and fever, although chest radiography results were free of clinical abnormalities. The donors received proper antibiotic therapy according to culture and sensitivity tests, and infections did not progress into pneumonia. One case of unexplained respiratory insufficiency was detected. This donor experienced sudden dyspnea and chest pain. Computed tomography angiography and D-dimer tests were done, which revealed no abnormalities. In addition, cardiac examination, electrocardiogram, and echocardiography tests were normal. No donor required intubation, mechanical ventilation, or readmission to the ICU.

There were no reported donors with pneu­mothorax, ALI, ARDS, or TRALI. No incidences of mortality were recorded during our period of analyses. Table 3 shows the demographic results of donors with SRCs.

With regarding to nonrespiratory complications, the most commonly encountered complication was raw surface collection (14.6% [n = 26]), with only one case among patients with SRCs. All incidences were minimal or mild collection on the liver cut surface and were managed conservatively. Only 3 donors required pigtail insertion to evacuate the collection. The second most commonly encountered com­plication was biliary leakage (7.9% [n = 14]) with 1 incidence in the SRC group. These nonrespiratory complications were managed conservatively. Table 4 shows the distribution of nonpulmonary com­plications among the analyzed donors.

There were no significant differences between patients with and without SRCs with regard to ICU and hospital stays. There were no cases of reop­eration during the period of analysis (Table 5).

As early as 1989, LDLT has given hope to many patients with end-stage liver disease; unfortunately, this procedure subjects healthy donors to major surgery with a relatively high risk for mortality and morbidity.6,7

In our present study, the frequency of SRCs was 5.6% in 178 living liver donors. Results from other studies showed variable incidences of respiratory complications among donors ranging from 0.7% to 38.5%.8-11 This variation may be related to the absence of consensus on the definition of reported respiratory complications. In our study, we excluded minor complications discovered accidentally during chest ultrasonography examinations.

Our study revealed that age ≥ 35 years and previous surgery were risk factors for SRCs among our donor cohort. Candido and colleagues2 identified right lobectomy, smoking, and intraoperative blood transfusion as risk factors for overall postoperative complications in living liver donors. In our center, preoperative smoking cessation strategy is one of the necessary steps in the donor preparation program. It has been demonstrated to be exceedingly powerful in diminishing the incidence of postoperative respiratory complications.13

Cerutti and colleagues18 studied postoperative coagulation status in living liver donors using thromboelastography. They found that more than half of the donors demonstrated a transient hyper­coagulable state despite routine LMW heparin prophylaxis. This may be due to release of huge amounts of tissue factor, factor VIII, and/or von Willebrand factor during cutting of the liver tissue with subsequent enhancement of the coagulation cascade over the body, which is followed by fibrinolysis.

In our center, there is a strict policy to prevent thromboembolic events after hepatectomy for LDLT, which start with the preoperative evaluation of donors. This evaluation involves obtaining the history of thromboembolic diseases and screening for coagulation abnormalities with prothrombin time, partial thromboplastin time, INR, factor V Leiden mutations, proteins C and S, and antithrombin III. Factor V Leiden mutations have been considered a common cause for rejection of donors (accounting for 23% of all causes of rejection).19

In our center, we apply intermittent calf com­pression during surgery and in the first 24 hour postoperatively. We use LMW heparin for prophylaxis against DVT by the second day if there are no contraindications. Patients are also encouraged to achieve early mobilization. However, close mon­itoring with thromboelastography and/or laboratory inves­tigations is still required for early detection of pulmonary embolism and to tailor the dose of LMW heparin in highly susceptible individuals. In addition, we recommend correlating the incidence of pulmonary embolism with perioperative fluid therapy and drugs.

After hepatectomy, low albumin levels may occur because of either dilution by intraoperative fluid therapy with subsequent alteration in vascular permeability or transient impairment of synthetic function of the liver due to low residual liver volume.22 In addition, the extended operative technique, especially with right hepatectomies and division of ligaments, may add to severe damage to the lymphatic vessels with secondary creation of abnormal peritoneal-pleural pathways. This could result in the increased frequency of postoperative pleural effusion.23,24

The low incidence of pneumonia in our study may be attributed to preoperative preventive measures like smoking cessation and exclusion of obese patients. Our center also employs postoperative measures, such as effective pain management, chest physiotherapy, and early mobilization.

There was no significant difference between patients with and without SRCs with regard to duration of ICU and hospital stays. This may be related to the prompt management of complications, resulting in most donors not requiring an extended hospital stay. No cases of reoperation were recorded during our analyzed period, and we had no cases of mortality. Previous studies have reported mortality rates of 0.18% to 0.2% among donors for LDLT.26,27

A limitation of this study was that we did not correlate frequency of SRCs with postoperative laboratory investigations, such as albumin and INR levels.

Donor safety is a major issue in LDLT; however, complications are still inevitable in some cases. Close monitoring with early diagnosis and prompt manage­ment are essential to achieve a better prognosis. Age ≥ 35 years and previous surgery could be identified as risk factors for SRCs. More prospective and retrospective studies are needed to obtain further information on pulmonary com­plications and to investigate proper management strategies. 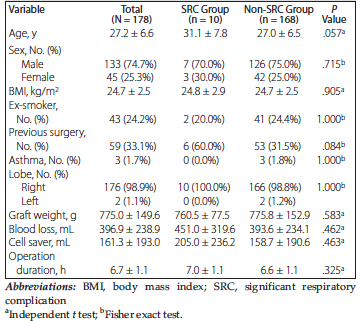 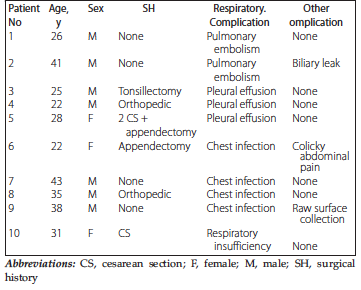 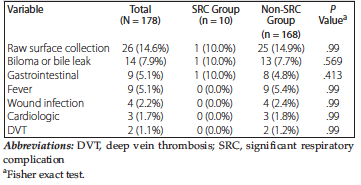