Objectives: BK polyomavirus is one of the main causes of chronic renal failure and ureteral stenosis in kidney transplant recipients, affecting approximately 15% of kidney transplant patients during the first year after transplant. The immunosuppressive treatment used in these recipients allows a reactivation of the virus by allowing infection, which can manifest from viruria, viremia, or nephropathy. The use of ureteral stents in renal transplant to prevent postoperative com­plications has been associated with an increase in BK polyomavirus nephropathy. Our objective was to describe associations between viruria and viremia and our reimplantation surgical technique and ureteral stenting.

Primary infection with BKV is acquired in childhood and is usually a subclinical infection or presents as a mild respiratory condition. After this primary infection, the virus remains latent in urothelial cells, with its seroprevalence in adults being > 80%,4 and immunocompetent individuals are asymptomatic.5 Over the past 20 years, possible risk factors associated with the reactivation of this virus have been identified in renal transplant recipients.6

The following risk factors of BKV viruria (BKVU), BKV viremia (BKVM), and BKV nephropathy have been described: the use of double J stent, the immunosuppressive treatment regimen with high-dose tacrolimus or corticosteroids, organs from donors after cardiac death, the male sex of the recipient, a history of previous transplants in the recipient, the age of the recipient, delayed graft function, and episodes of acute rejection.7,8

The immunosuppressive treatment used in these patients allows for the virus to reactivate by progression of an infection that may manifest from viruria, viremia, or nephropathy.9

The absence of an effective prophylactic or curative treatment requires special attention in the detection of the virus by means of serial screening with polymerase chain reaction (PCR), as well as discovery of risk factors.10

The use of ureteral stents in renal transplant to prevent postoperative complications has been associated with an increase in BKV nephropathy.11 The main hypothesis is that the catheter could cause damage to the urothelial epithelium where the inactivated virus would remain, causing inflammation and erosion, which could trigger the activation and replication of the virus.12

The objective of our study was to describe the association between BKVU and BKVM and our reimplantation surgical technique and ureteral stenting.

The immunosuppressive therapy used in our patient sample was everolimus in 60% of the recipients and mycophenolate in 40% of recipients.

The protocol used in our center for the screening of BKVM and BKVU begins 1 month after surgery and consists of PCR examination of both plasma and urine samples; PCR screening is repeated monthly for the first year after transplant.

Nephropathy is diagnosed by histological analysis after performing a fine-needle biopsy of the graft.

The following variables were analyzed in the 3 groups: age of recipient, sex, whether the donor had brain death or cardiac death, history of previous transplants, cold ischemia time of the graft, delayed graft function (defined as the need for dialysis in the first week after transplant), uretero-bladder anastomosis stenosis, and graft survival; in addition, renal function data (creatinine, mg/dL) from December 2018 was also considered.

Our study was exempt from approval from an ethics board.

When we compared the 3 groups, the average age in all groups was similar, with no statistically significant differences; therefore, we concluded that the groups were comparable. The distribution by sex in all groups was also similar, presenting approximately a 2:1 ratio of male to female patients.

With regard to type of donor, most donors were deceased from brain death; the controlled asystole donation program in our center did not begin until July 2016, which was near the end of our study period.

No statistically significant differences were observed in favor of presence of BKVU or BKVM with respect to whether the recipient had a history of previous renal transplant.

There were no statistically significant differences when we compared the following variables among the 3 groups: immunosuppressive therapy, dialysis in the first week due to delayed graft function, the mean cold ischemia time of the graft, graft survival, and renal function (in December 2018).

All sample data are detailed in Table 1.

Although new and more potent immunosuppressive drugs have contributed to decreasing the devel­opment of acute rejection in kidney transplant recipients, these new agents have allowed the development of viral infections that can affect the graft.

BK virus infection is a frequent opportunistic viral infection in renal transplant recipients, affecting approximately 15% of this population during the first year after transplant.12

BK virus is present in latent form in the urothelial epithelium and renal tubular epithelial cells, and reactivation involves a replication of the virus, which initiates a process of lysis of the tubular cells and the appearance of viruria. The virus subsequently multiplies in the interstitium and settles in the peritubular capillaries, producing viremia. In this phase of viremia, the virus can settle in the renal graft, leading to tubulointerstitial lesions. As a last step, when the damage is severe, BKV nephropathy can develop.

After renal transplant, 30% to 60% of recipients will develop BKVU, and, of these, approximately one-third will develop BKVM.13,14 If there is no modification of risk factors and the infection progresses, between 1% and 10% of kidney transplants, will definitely develop BKV nephropathy.14,15

In recent years, it has been hypothesized that the use of a double J stent in renal transplant increases the incidence of BKVU and BKVM. Studies in animals have shown that catheters caused damage to the ureteral epithelium, which led to inflammatory changes after 6 weeks of catheterization. These inflammatory changes would favor the reactivation of BKV, with the consequent increase in its replication.16

The use of the double J stent has been justified to reduce major complications arising from uretero-vesical anastomosis. A meta-analysis published in 200517 showed a reduction in complications derived from ureteral reimplantation (relative risk = 0.24; 95% confidence interval [95% CI], 0.07 become and – 0.77; P = .02, number needed to treat = 13) with the prophylactic use of double J stents. This review was published before subsequent articles were published that described an increase in BKVM in transplant recipients who had a catheter.

Brennan and associates published a randomized prospective study in 2005,18 the objective of which was to determine the incidence of BKVU, BKVM, and nephropathy by comparing a group of transplant recipients who received immunosuppression with tacrolimus versus another group of transplant recipients who received cyclosporine. Of the 200 transplanted patients included in that study, the multivariate analysis of the results demonstrated that the use of a double J stent was a risk factor for BKVM with hazard ratio = 4.3 (P = .044). In that study, of the 54 patients in whom a double J stent was used, 31% presented with BKVU and 43% with BKVM; these values are higher than those reported in our study (25% BKVU and 6% BKVM). In addition, there were no reported differences in BKVU and BKVM versus type of immunosuppression; the study did not describe when the catheter was removed.

In 2011, a retrospective study published by Siparsky and associates19 described a sample of 184 kidney transplant patients, in which double J stents were used in 124 patients (67%). When analyzing the risk factors for the development of BKVM, it was noted that the use of a double J stent was a risk factor, with an odds ratio of 3.17 (P = .02). The study reported no statistically significant differences in their analyses of the remaining risk factors. Siparsky and colleagues19 also did not describe when the catheter was removed.

In 2014, Hashim and associates20 published a retrospective study with 621 patients, in which a double J stent was placed in 295 patients. The results showed that BKVM was present in 22% of patients with the stent, greater than reported for our sample, compared with 16% of patients without stent. In the multivariant analysis of the results, having a stent significantly increased the risk of BKVM (P = .04). This study reported removal of stents at 4 to 6 weeks.

In a 2016 retrospective case-control study,21 the use of stent was identified as an independent risk factor for the development of BKVM (hazard ratio = 1.36, 95% CI, 1.05-1.76; P = .024) during the first year after transplant. This study reported an incidence of BKVM in 17.2% of catheterized patients, compared with 13.5% in those who did not have a catheter. In our study, only 6% of patients presented BKVM.

The use of double J stents is also determined by the surgeon’s experience, and the double J stent method is not used by most experienced surgeons.23,24 It is important not to underestimate other complications arising from the use of the catheter, such as those arising from excessive catheter length (> 20 cm) or from keeping the catheter in place for a an extended period, that can lead to patient discomfort, embedding of the catheter, and catheter migration. The economic aspects derived from the readmissions of these patients for these complications and the need for an endoscopic procedure for the withdrawal of these catheters also need to be considered.25,26 With our technique, the ureteral stent is removed by percutaneous traction between postoperative days 5 and 7, with no need for the patient to retain a catheter on an outpatient basis nor to return for endoscopic removal.

Our type of ureteral stenting has a low rate of BKVU and BKVM compared with results seen in other studies.27 In addition, with our technique, the ureteral stent removal procedure requires no invasive endoscopy procedure, thereby avoiding the consequent economic implications of endoscopy. In the same way, complications deriving from catheterization can be avoided, such as discomfort associated with the catheter, urinary infections, or the forgotten double J stent syndrome.26,27

For the future, prospective randomized studies will be needed with regard to reimplantation techniques and use of our usual ureteral stenting technique versus the double J stent, with defined criteria of duration of catheterization in each case, as well as investigations of specific defined complications. 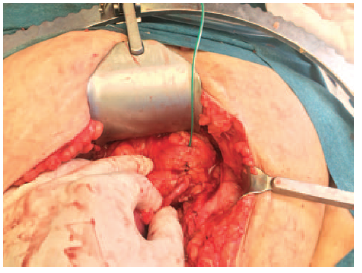 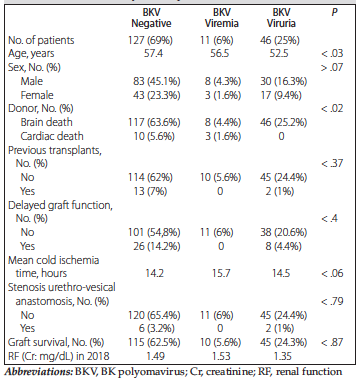 Table 1. Details of the Analyzed Sample