Liver transplant is a potentially curative treatment for patients with hepatocellular carcinoma (HCC), fulfilling specific criteria that take into account the morphology (size and number) of the tumor, the patient's functional status, and the status of the patient’s liver.1 In patients selected on the basis of the above criteria, 5-year overall survival after liver transplant is up to 70% and 5-year disease-free survival is close to 65%.2

The transplanted liver is the most common site of recurrence, and extrahepatic metastases are also typically found during disease progression.3 Adrenal glands are among the most commonly affected sites along with the lungs and bones.4 Isolated metastatic disease in the adrenal glands, especially bilateral, is infrequent, and only rarely are such patients candidates for surgical treatment.3,4 In this report, we describe a case of a patient who underwent left adrenalectomy for an isolated adrenal metastasis (AM) from HCC 2 years after orthotopic liver transplant and then a right adrenalectomy for another isolated AM 1 year later.

A 56-year-old man with a history of alcoholic cirrhosis and imaging consistent with HCC inside Milan criteria underwent orthotopic liver transplant. Preoperative alpha-fetoprotein (AFP) was low (1.3 ng/mL), and histopathologic examination of the explanted liver showed a cirrhotic liver and a moderately differentiated HCC. The tumor was 4.5 cm in diameter with several small satellite nodules (T2N0M0). Microvascular invasion was present. The transplant proceeded without any complications, and the patient was maintained on immunosup-pression, which consisted of tacrolimus and mycophenolate mofetil. The patient continued care with regular follow-up.

Thirty months after the orthotopic liver transplant, a control ultrasonography revealed tumor involve-ment of the left adrenal gland. The patient’s AFP level was normal, and no signs of tumor dissemination were visible on multislice computed tomography scans. Left adrenalectomy was performed, and an 11.5-cm tumor was removed together with the adrenal gland. One year after that surgery (42 months posttransplant), the patient was admitted to the emergency department at our center because of abdominal pain radiating to the right flank. A multislice computed tomography scan showed a contrast-enhanced mass in the right adrenal gland with a surrounding hematoma (Figure 1). The patient’s AFP level was again normal. Because the patient was hemodynamically stable without a significant decrease in hemoglobin, an elective right adrenalectomy was performed 1 week later. The pathology examination showed a 5.5-cm metastasis of HCC to the right adrenal gland (Figure 2). Two years after surgery, the patient is well and without signs of tumor recurrence in the transplanted liver or elsewhere.

Hepatocellular carcinoma is the fifth most common cancer in the world and the third leading cause of cancer-related death.5 Liver transplant is an excellent treatment option for HCC, providing cure of both the tumor and the underlying cirrhosis in carefully selected patients.1,2 However, in 30% to 40% of patients, HCC recurs after orthotopic liver transplant. The transplanted liver is the most frequent site of recurrence, with other often affected sites being the lungs, bones, and adrenal glands.3

The prognosis of patients with extrahepatic metas-tases is poor, with median survival after diagnosis of only 4.9 months.6 The pattern of metastasis is usually one of multiple metastatic involvement and only supportive and palliative care can be offered to these patients. Systemic therapy has limited efficacy.3,6 Solitary metastasis, on the other hand, gives an opportunity for radical surgical resection. Reports describing outcomes of surgical resection of isolated AM from HCC are limited to several case reports and small case series. The reported rate of metachronous AM from HCC after liver resection is 0.5%.7 A series of cases from Lyon described 7 patients with 2 early postoperative deaths and mean survival of 38 months after adrenalectomy for the remaining 5 patients.8 Several other case reports have described good results with surgical treatment of one-sided isolated AM appearing after variable periods posttransplant.9-12 Only 1 report described a course similar to the one described for our patient. In this report from Spain, the authors described isolated left AM 6 months after orthotopic liver transplant. Left adrenalectomy was performed; however, 8 months later, an isolated right AM appeared and a right adrenalectomy was performed. The patient was reported to be free of recurrence 4 years after orthotopic liver transplant.13

The first AM in our patient was discovered during regular follow-up. However, the second was suspected after the patient presented with signs of adrenal hemorrhage. Adrenal hemorrhage secondary to metastasis of HCC is rare. A review of patients with adrenal hemorrhagic masses found hemorrhage caused by metastatic HCC in only 1 of 133 cases.14

Possible treatment options are adrenalectomy alone, adrenalectomy after transarterial embolization, embolization alone, or conservative treatment. Our patient was hemodynamically stable with localized metastatic disease; thus, we judged that he would be a good candidate for radical surgery despite bilateral metachronous involvement of the adrenal glands. Treatment options for metachronous AM from HCC include conservative and surgical approaches. Patients with generalized metastatic disease, poor liver function, or poor overall performance status can be treated with transarterial chemoembolization, alcohol injections, radiotherapy, or systemic chemotherapy.15 On the other hand, patients with good liver function and general condition with metastatic disease confined to the adrenal gland are acceptable candidates for surgery with prospects of good survival.7-13

In conclusion, isolated metachronous bilateral AM from HCC is a rare occurrence. It should be noted that, in the absence of other tumor dissemination, even bilateral adrenalectomy is appropriate and can lead to long-term disease-free survival. 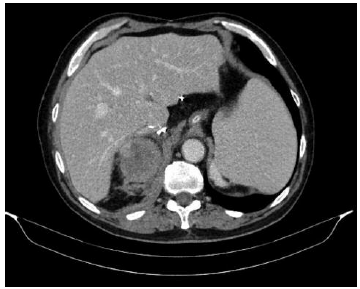 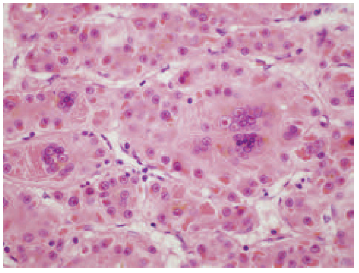 Figure 2. Histopathology Image of Metastasis of Hepatocellular Carcinoma to the Right Adrenal Gland