Cryptococcosis is an opportunistic infection caused by the Basidiomycota Cryptococcus neoformans (Cryptococcus gattii), which affects immunosuppressed patients and less frequently immunocompetent patients. Solid-organ transplant recipients are a particularly high-risk group, depending on the net state of immunosuppression. In these patients, the infection usually appears after the first year after transplant, although it may occur earlier in liver transplant recipients. In most cases, the infection is secondary to the reactivation of a latent infection, although it may be due to an unidentified pretransplant infection by primary infection. Less frequently, it may be transmitted by the graft. The lung and central nervous system are most frequently involved. Extrapulmonary involvement is seen in 75% of the cases, and disseminated disease occurs in 61%, with mortality ranging from 17% to 50% when the central nervous system is involved. Here, we report a case of disseminated cryptococcosis (lymphadenitis, meningitis, pulmonary nodules, and possibly sacroiliitis) in a patient after liver transplant, with good clinical and micro-biological outcomes and without relapse.

Cryptococcosis is an opportunistic fungal infection that affects immunosuppressed and less frequently immunocompetent patients. Most cases are caused by Cryptococcus neoformans (Cryptococcus gattii), and the primary route of infection is by inhalation.1 In patients without human immunodeficiency virus, the infection is generally associated with immuno-suppression secondary to solid-organ transplant (SOT) and transplant of hematopoietic progenitors in those who receive immunosuppressive agents and in those who present with sarcoidosis, primary immunodeficiency, autoimmune, or liver diseases.2

Patients who are SOT recipients are at risk of cryptococcosis, with an incidence that reaches 5.3%.3 It is usually a late-onset infection (after the first year posttransplant)4,5 but may have an early onset, particularly in patients undergoing liver or lung transplant compared with renal transplant recipients. This may be explained by the intensity of immuno-suppressive treatment.6 In most cases, infection occurs because of reactivation of a latent infection, although it can occur after transplant following a primary infection. In rare cases, it can be transmitted by the graft.7

The lung and central nervous system (CNS) are most frequently involved in the infection; however, in up to 61% of liver transplant patients, it manifests as disseminated disease, with extrapulmonary involvement in 75% of the cases.6 Other less frequently affected sites include the skin (nodules, papules, ulcers, abscesses, cellulitis, and panniculitis),8 soft tissues, and osteoarticular system in 6% to 12% of patients.3 The liver, kidneys, and prostate are less frequently involved. The mortality rate in disseminated disease is 17% and is close to 50% when the CNS is involved.6

We report a case of disseminated cryptococcosis (lymphadenitis, meningitis, pulmonary nodules, and possibly, sacroiliitis) presenting early in a patient after liver transplant, with good clinical and microbiological outcomes and without relapse.

A 44-year-old Colombian woman presented with portal hypertension and cirrhosis secondary to autoimmune hepatitis complications, grade 3 esophageal varices without bleeding, and refractory ascites without spontaneous peritonitis (Child-Pugh class C score of 12 and Model for End-Stage Liver Disease score of 25). She did not receive immunosuppressive drugs for autoimmune hepatitis treatment, and she had no exposure to bird or bat guano. In January 2017, she underwent orthotopic liver transplant. In the perioperative period, she received antibacterial prophylaxis with piperacillin-tazobactam for 48 hours and anidulafungin for 10 days, according to institutional protocol. The antifungal agent was used because of the high risk of mold infection (elevated transfusion support and acute kidney injury per the Kidney Disease: Improving Global Outcomes score of 3, with dialysis therapy until day 7). She did not receive immunosuppression-inducing agents and achieved full recovery of renal function. She was in cytomegalovirus (CMV) preemptive strategy because her CMV risk was intermediate (immunoglobulin G donor positive/immunoglobulin G recipient positive); all viral loads were negative. She was discharged from the hospital on posttransplant day 10. The patient was started on immunosuppressive treatment (prednisolone at 20 mg/day, conventional tacrolimus at 5 mg every 12 h, and mycophenolate mofetil at 1000 mg every 12 h) and prophylaxis with trimethoprim-sulfamethoxazole, nystatin, and acyclovir (the latter during the first month posttransplant).

On posttransplant day 49, she was readmitted for 2 weeks due to headache associated with bilateral sacroiliac joint pain. On physical examination, the patient was found to be afebrile, awake, and without meningeal signs; however, pain and limitation were found when moving the bilateral sacroiliac articulation. Laboratory tests showed leukocytosis with deviation to the left, elevation of C-reactive protein, and good renal and hepatic graft function (Table 1). Magnetic resonance imaging showed bilateral chronic inflammation in the sacroiliac joints and multiple intraperitoneal and retroperitoneal enlarged lymph nodes. Neck and chest tomography showed multiple supraclavicular and infraclavicular lymphadenopathies and a pulmonary nodule in the medial segment of the middle lobe (Figure 1), with normal brain magnetic resonance imaging.

An exploratory laparotomy was performed, with resection of retroperitoneal nodes, and a percutaneous lung biopsy, guided by tomography, as well as lumbar puncture, with normal cerebrospinal fluid (CSF) opening pressure, were performed. A posttransplant lymphoproliferative disorder was ruled out. Lateral flow assay revealed Cryptococcus antigen in the blood, which tested positive at a dilution of 1/2560.

Disseminated cryptococcosis without crypto-coccemia was confirmed with meningeal, pulmonary, and lymph node involvement. Antifungal induction therapy was initiated with amphotericin B (0.7 mg/kg/day) and flucytosine (100 mg/kg/day). In addition, the dose of immunosuppressant therapy was reduced to 4 mg tacrolimus every 12 hours, 10 mg/day prednisolone, and 500 mg mycophe-nolate mofetil every 8 hours. On day 4 of treatment, a sacroiliac joint biopsy was performed. Fungal cultures were negative, and histology showed chronic inflammation and fibrosis, with negative methenamine silver and mucicarmine stains. The induction antifungal treatment was extended to 3 weeks, with resolution of symptoms, CSF culture sterilization, and normalization of CSF parameters. Hospital discharge included consolidation treatment with fluconazole at 400 mg/day. At 10 months posttransplant, the patient remains asymptomatic, without relapse and with good graft function.

Liver transplant is a treatment option for patients with acute and chronic liver diseases,9 with good short- and long-term results due to patient selection, improved surgical techniques and perioperative care, and development of more effective immunosup-pressive drugs.10 However, opportunistic infections frequently occur in such patients and are one of the main causes of death.9

Up to 8% of fungal diseases after SOT are caused by Cryptococcus species; these are the third most common type of fungal infection after Candida and Aspergillus species.11 The incidence of Cryptococcus species in liver transplant is as high as 5.3%.3 Our reported patient had risk factors for infection caused by Cryptococcus due to advanced autoimmune liver disease, renal failure requiring renal replacement therapy in the early posttransplant period, and use of immunosuppressants, particularly corticosteroids. All of these risk factors affect the net state of immunosuppression, which is also determined by the cause of the disease for which the transplant was indicated, the type and duration of immunosup-pressive treatment, the integrity of the muco-cutaneous barriers, the presence of metabolic conditions (diabetes, malnutrition, and uremia), and coinfection with immunomodulatory viruses such as CMV, Epstein-Barr virus, and human immuno-deficiency virus, among others.4 Furthermore, it is important to note that our patient received antifungal prophylaxis with anidulafungin, although this agent is not active against Cryptococcus.

Most cases of cryptococcal infection in SOT recipients occur after the first year posttransplant,4,5 with a median occurrence at 20 months.11 In most cases, this is due to a reactivation of a latent infection.7 In our patient, the disease was of early onset (second month), which is more common in liver transplant than in kidney transplant recipients.6 In early-onset infection, particularly when it occurs in the first 30 days posttransplant, the possibility of an unidentified pretransplant infection12 and transmission from the graft13 should be considered. However, our patient did not have the most common clinical presentations shown in these cases, such as graft involvement and surgical wound or unusual sites of infection. No information was available about whether the other recipient of kidneys from the same donor had cryptococcal infection.

In the case presented here, disseminated involve-ment (meningeal, pulmonary, and lymph node) by C. neoformans was documented, which is described in literature as occurring in up to 61% of patients6 because the CNS and lung are the most frequently compromised sites.7 Despite the clinical signs, images, and biopsy compatible with sacroiliitis, no Cryptococcus was demonstrated in the joint. This is possibly because the surgical sample was obtained after 4 days of exposure to effective antifungal therapy. After treatment, complete resolution of the joint symptoms was also achieved, indicating a possible joint infection, which has infrequently been described.1

Finally, the mortality rate in disseminated cryptococcosis is around 17% and increases to almost 50% when the CNS is involved, particularly in the presence of factors predictive of 90-day mortality, such as cryptococcemia, compromised in the state of consciousness, and intracranial hypertension (CSF opening pressure ≥ 25 cmH2O).1 Our patient did not have any of the factors described above, and her response to treatment was favorable and without complications.

In conclusion, cryptococcosis is an opportunistic infection that may occur early after SOT; this is often accompanied by pulmonary, systemic, and/or CNS infection. Other sites are also less frequently involved but with high morbidity, according to the associated risk factors. 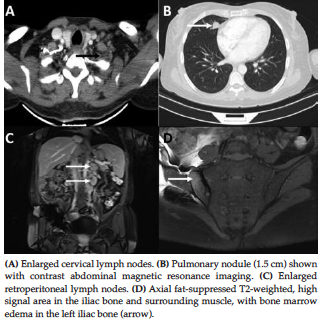 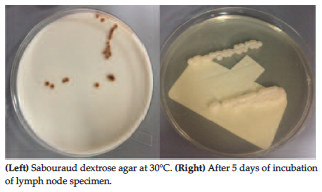 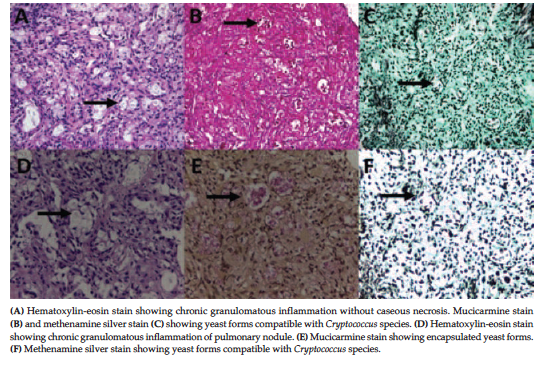 Figure 3. Histology of the Retroperitoneal Adenopathy and Pulmonary Nodule (×40)