West Nile virus infection is more frequently associated with neuroinvasive disease and high morbidity and mortality in immunocompromised hosts. Here, we describe a 47-year-old Egyptian kidney transplant recipient who was admitted to our department in 2016 for persistent fever, altered mental status, and upper limb tremors. In addition, renal impairment, signs of acute thrombotic microangiopathy, pancreatitis, and slightly altered inflammatory indices were present. The patient was treated with antibacterial and antiviral therapy, and reduced immunosuppressive therapy was prescribed. After several biochemical and instrumental examinations, only slight blood positivity for West Nile virus immunoglobulin M in the absence of immu-noglobulin G was found, whereas immuno-globulins M and G on cerebrospinal fluid and West Nile virus polymerase chain reaction were negative. Serology evaluated after 23 days of hospitalization confirmed immunoglobulin M positivity and detected weak immunoglobulin G positivity; however, according to the US Centers for Disease Control and Prevention diagnostic criteria, it was not sufficient to confirm diagnosis. During hospitalization, clinical recovery was observed, but severe renal insufficiency persisted. Renal biopsy performed after clinical recovery demonstrated chronic antibody-mediated rejection with advanced chronic lesions, without viral cytopathic signs. Four months later, we received confirmation of West Nile virus infection by plaque reduction neutralization test. The current case described severe West Nile virus infection with clinical neurologic involvement, thrombotic micro-angiopathy, and pancreatitis, resulting in irreversible loss of kidney function. Delayed diagnosis, based on US Centers for Disease Control and Prevention criteria, was due to absence of both characteristic radiologic features and sensitive and promptly available laboratory tests. This case stresses the need for accurate diagnostic tests and/or a partial revision of the diagnostic criteria. In fact, with an earlier diagnosis, we would have avoided diagnostic and therapeutic procedures that may have contributed to the loss of graft function in the described case.

West Nile virus (WNV) is a single-stranded RNA arbovirus transmitted to humans by mosquitos.1 West Nile virus infection is progressively emerging among Occidental countries.2 Most cases are asymptomatic, with 20% of cases having self-limited fever and < 1% developing neuroinvasive disease with meningo-encephalitis and/or other central nervous system (CNS) signs.3 In solid-organ transplant (SOT) patients, who are more susceptible to uncommon viral infections, WNV is more frequently symptomatic, often involves the CNS, and is associated with high morbidity and mortality.4 Therefore, early diagnosis is challenging for the management of the infection.

In this report, we describe a case of delayed diagnosis of severe and atypical WNV infection in a kidney transplant recipient, characterized by a com-plete clinical recovery but an irreversible loss of kidney function.

A 47-year-old Egyptian male patient received a kidney transplant from a deceased donor in 2011 for a not-diagnosed kidney disease. The immunosup-pressive therapy consisted of basiliximab at the time of transplant and steroids, cyclosporine, and myco-phenolate mofetil, which were maintained thereafter. The patient developed complete restoration of kidney function. In the following years, a slow and progressive rise in serum creatinine levels (1.7 to 2 mg/dL in 2013) was observed. It was not associated with reduced immunosuppression or proteinuria. However, because he left Italy to live in Egypt, he was not submitted for a renal biopsy. His renal function was stable thereafter (last serum creatinine level was 1.9 mg/dL in June 2016).

In October 2016, he flew back to Italy and was admitted to our Emergency Department for persistent high fever (40°C), associated with altered mental status (confusion, drowsiness, disorientation) and upper limb tremors. Typical signs of meningo-encephalitis were absent. Biochemical examination showed markedly high serum creatinine level. Acute thrombotic microangiopathy signs were found. Pancreatic enzymes were strongly altered, whereas inflammation indices were only slightly elevated (Table 1). Diarrhea was absent, and ADAMTS13 activity was normal. The patient was then admitted to our department where mycophenolate mofetil was discontinued. The following empirical antibiotic therapy was started: intravenous ciprofloxacin (400 mg/d) + intravenous piperacillin/tazobactam (2.25 g every 12 h) for the first 72 hours, followed by intravenous vancomycin (1000 mg load dose, then monitoring of hematic levels) + intravenous meropenem (500 mg/d). Intravenous acyclovir was added (500 mg/d). No clinical benefit was obtained. Over the following days, renal function worsened, and hemodialysis was started.

On day 8 of hospitalization, with suspicion of WNV infection, serology test with enzyme-linked immunosorbent essay was performed. The result was available after 2 weeks and showed only a slight positivity for WNV immunoglobulin (Ig) M in the absence of IgG. We therefore looked for WNV IgM and IgG and WNV PCR on previously collected CSF samples and for WNV PCR in the blood; however, all of these results were negative. In the absence of any certain causative diagnosis according to the US Centers for Disease Control and Prevention criteria, antibiotic and antiviral therapies were continued for 4 weeks with no benefit. On day 23 of hospitalization, new serology for WNV confirmed IgM positivity, with weak positivity for IgG. A few days later, the patient’s general conditions improved, and complete clinical recovery was obtained, but renal insuf-ficiency requiring hemodialysis persisted.

To evaluate the cause of kidney damage and because of positivity for class II DQ5 donor-specific antibodies (mean fluorescence intensity of 27 000), the patient underwent a graft biopsy that showed chronic antibody-mediated rejection with advanced chronic lesions; no viral cytopathic signs were found (Figure 1). Four months later, we received con-firmation of WNV infection by plaque reduction neutralization test.

Because of the immunosuppressive state, SOT patients can develop unusual viral infections such as WNV. Here, we reported a case of delayed diagnosis of severe WNV infection in a kidney transplant recipient with clinical CNS involvement, thrombotic microangiopathy, and pancreatitis, resulting in graft loss. According to the timeline of the infection, we can assume that it was naturally acquired in Egypt. Interestingly, WNV infection occurred 5 years after transplant, far from the period of highest immuno-suppression (ie, during the first 3 mo).

In SOT patients, WNV infection has higher mor-bidity and mortality because it more frequently has a severe course and the risk of developing meningoencephalitis upon infection can reach 40%.5 Because of the higher lethality, early diagnosis is important for management of the disease. Nevertheless, even diagnostic suspicion can be difficult because clinical signs at its onset can be atypical in these patients.6 Our patient did not have clear clinical signs of encephalitis or meningitis and did not have involvement of other pathognomonic organs. The diagnostic suspicion of WNV infection was made on day 8 after admission, after prolonged nonresponsiveness to 2 broad-spectrum antibiotic and antiviral therapies and negative cultures. Although specific signs of meningoencephalitis were absent, neuroimaging and electroencephalogram were performed. The first was negative, and the latter revealed nonspecific abnormalities. The most frequent clinical signs (dizziness and tremors) of WNV encephalitis are reflected in its radiologic features, which would show extrapyramidal system involvement.7 Nevertheless, only a few cases present with specific magnetic resonance imaging abnormalities.7,8

In our case, because suspicion for cause occurred 8 days after admission due to nonspecific clinical onset of WNV infection, laboratory tests were not decisive. For suspected acute WNV infection, actual diagnostic criteria include blood or CNS serology, but only if significant positivity of IgM and negativity of IgG are detected. Among serologic tests, CSF IgM is more accurate for diagnosis. Confirmation is based on plaque reduction neutralization test, which takes months to give results. Alternatively, diagnosis can be made through the isolation of WNV RNA in blood or CSF.9 However, these diagnostic criteria are not considered accurate for an early diagnosis of WNV infection in SOT patients.10,11 Serology can have false-negative results or be only slightly positive in immunocompromised patients, who may have lower plasma cell activity due to immuno-suppressive therapy.10 Genome detection with standard techniques has a low sensitivity, and viremia is often transitory.10,12 In our case, only a slight positivity of serum IgM for WNV was detected, whereas CSF IgM and genome were negative. Diagnosis of WNV infection was not considered to be supported according to the acknowledged criteria.

There is no specific therapy for WNV infection. In the presence of severe WNV sepsis, there may be a clinical benefit for specific/nonspecific immuno-globulin infusion and antiviral therapy such as alpha interferon and ribavirin.13 Although there is no approved antiviral therapy for WNV infection, early clinical suspicion and rapid and accurate diagnostic tests could be important to reduce the use of poten-tially toxic diagnostic and therapeutic procedures.

There may be an association between WNV infection and acute kidney injury during severe acute infection, often related to acute tubular necrosis, and chronic kidney disease after convalescence has also been described.14 The role of the virus in kidney damage is still not clear. In some cases, urinary WNV genome has been detected during acute infection and after convalescence, suggesting possible renal tropism.14 Histopathologic analysis of human autopsies have revealed positive immunohisto-chemistry for WNV in the absence of tissue inflammation.15 In the present case, we did not evaluate the nephrotoxic potential of WNV, nor did we perform an immunohistochemical analysis for research of WNV in renal tissue. However, no virus cytopathic signs in tubular and/or glomerular cells were evident in the biopsy.

We suggest that both hemodynamic alterations and toxin release may have occurred during a severe and protracted infection, and the prolonged use of nephrotoxic antibiotics may have contributed to the irreversible loss of graft function, although chronic damage due to antibody-mediated rejection likely played the predominant role.

Nevertheless, although the patient had a complete clinical recovery with supportive therapy and reduc-tion of immunosuppression, with an early and certain diagnosis of WNV infection, we could have avoided a long course of nephrotoxic anti-biotics, therefore eliminating one of the potential risk factors for graft loss.

In conclusion, considering all of these aspects, kidney transplant recipients should be considered as a population potentially at risk of unusual viral infections, such as WNV, even many years post-transplant. Classical clinical and radiologic CNS findings are not the typical presentation of WNV infection in this population, in which the infection can present with different clinical onsets. The diagnostic criteria now available are based on laboratory tests that are not sufficiently sensitive, specific, and thus accurate for early diagnosis in kidney transplant recipients with symptomatic WNV infection. This case stresses the need for an accurate diagnostic test and/or a partial revision of actual diagnostic criteria. A recent study proposed the use of metagenomic deep sequencing of CSF WNV genome for early and certain diagnosis.11 It is still undefined how much of the renal impairment, which can occur during and after WNV infection, could be related to the direct role of the virus, to hemodynamic and toxic factors, or to the necessary modifications of immunosuppressive therapy. 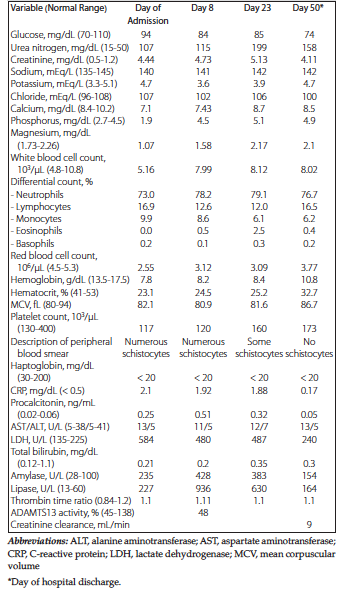 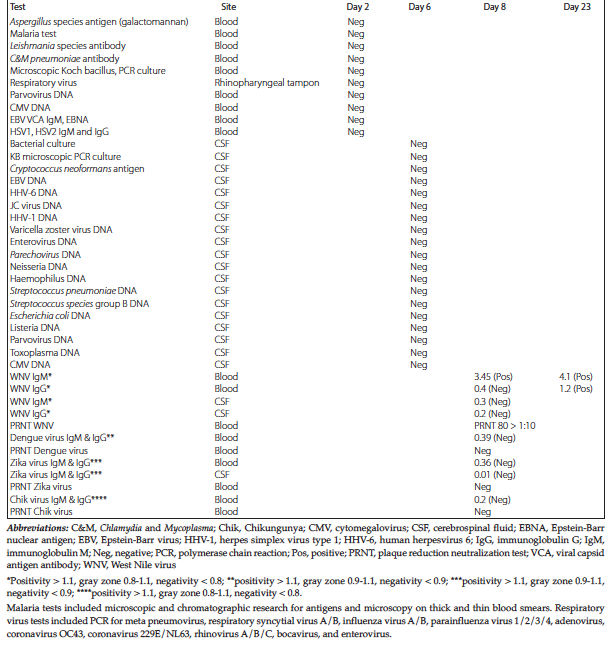