Many obstacles may complicate renal transplant, the preferred treatment for end-stage renal disease. Anatomic anomalies are of special importance during surgery. Double inferior vena cava is a rare anomaly reported in 0.2% to 3% of the population and may complicate renal transplant in certain cases. We present a case of a 29-year-old man with end-stage renal disease who was scheduled for repeat kidney renal transplant from a living related donor. His transplant posed many challenges to the transplant team. These included (1) difficult access for dialysis, which required transhepatic insertion of a dialysis catheter, (2) anomalous inferior vena cava anatomy with a double inferior vena cava, (3) a blocked right inferior vena cava, and (4) a small blocked bridging vein connecting the right inferior vena cava to an additional left inferior vena cava. A stent was inserted into the bridging vein to allow venous drainage from the graft. During the transplant procedure, the donated kidney was transplanted into the left iliac fossa and anastomosed to the left external iliac vein. The surgery was successful, without major operative or postoperative complications. The patient was discharged with normal renal function and enjoys normal renal function 6 months after surgery. This case emphasizes the importance of pretransplant evaluation and preparation and the need for high index of suspicion for anatomic variants in donors and recipients.

Renal transplant, the preferred treatment for end-stage renal disease (ESRD), is often complicated by various donor and recipient factors, including anatomic anomalies, preexisting disease states, and previous transplant procedures. A multidisciplinary approach is essential in many cases. We report a successful case of repeated renal transplant from a living related donor to a patient with difficult venous access and a double inferior vena cava. The patient provided consent to publication of case details and images.

A 29-year-old man was electively admitted to our hospital for renal transplant from a living related donor. He had ESRD of unknown cause since age 15 and had been treated by dialysis since age 17 years. He had undergone investigation for cause of renal failure, without diagnosis. The patient had under-gone living-donor kidney transplant 10 years before admission; the graft was excised after 2 weeks due to bleeding. Six years before admission, he underwent bilateral nephrectomy as preparation for repeat transplant due to episodes of urinary tract infection. The patient also had recurrent thrombosis of dialysis access.

During pretransplant investigation, the patient was found to have high donor-specific antibody, with mean fluorescence intensity of 2490. Before surgery, he underwent desensitization, which was achieved by plasmapheresis, intravenous immunoglobulin (IVIg) therapy, and rituximab. Before his present hospitalization, the patient had numerous pro-cedures for dialysis access and presented with recurrent catheter thrombosis. The patient already had a right femoral central venous line for dialysis before surgery. This dialysis catheter had to be removed pretransplant due to positive blood cultures with Staphylococcus hominis. To achieve alternative central venous access for dialysis as well as plasmapheresis and IVIg therapy pretransplant, the patient underwent transhepatic insertion of a vascular dialysis catheter into the right atrium by interventional radiology.

On a computed tomography scan conducted before surgery, the patient was found to have anomalous inferior vena cava (IVC) anatomy with a double IVC (Figure 1). A formal angiography was conducted to verify this finding (Figure 2). On the right, the IVC had been approached for dialysis access and showed significant fibrosis and was blocked near the bifurcation to the iliac veins.

This is also where the previous graft had been transplanted. The right IVC was connected to an additional left IVC via a small vein, termed interiliac vein,1 which was also blocked (Figure 2). To prepare for kidney transplant in the left iliac fossa, a stent was inserted into the interiliac vein (Figure 3), allowing the graft to be anastomosed to the left external iliac vein.

During pretransplant work-up, the patient underwent voiding cystourethrogram, which demonstrated a normal urethra and a small atrophic urinary bladder with smooth walls (maximum bladder volume of 27 mL, pressure of 155-177 cm H2O) with grade 1 vesicoureteric reflux. Bladder augmentation was considered but ultimately not performed because the urinary bladder was not neurogenic; we believed that its maximum volume would grow with time after renal function was restored.

The kidney donor was the brother of the patient, a healthy 21-year-old male. After the above-men-tioned preparations, kidney transplant was per-formed. The right kidney of the donor was retrieved laparo-scopically. During the procedure, the renal vein and artery of the graft were anastomosed to the right external iliac vein and artery, respectively, and the ureter was anastomosed to the native ureter end to side, due to the small size of the urinary bladder. There were no complications during surgery.

After surgery, creatinine declined rapidly. The patient began treatment with standard immunosup-pressive therapy. Duplex ultrasonography of the graft showed good blood flow. The patient experienced an episode of urinary tract infection with growth of Pseudomonas aeruginosa in a urine culture and was treated antibiotically with resolution of the infection.

Renal transplant is the treatment of choice for ESRD; however, it is often complicated by donor and recipient factors, which can cause technical challenges before, during, and after surgery. This case of kidney transplant was complicated by difficult venous access and anomalous IVC anatomy.

The patient, who had undergone previous kidney transplant, had a high titer of donor-specific antibody; therefore, he required desensitization before surgery, which was achieved by the standard protocol of plasmapheresis, IVIg, and rituximab.2

In our case, blockage of both the right IVC where the dialysis catheter had been situated and blockage of the interiliac vein did not allow transplant in the right or left iliac fossa. This problem was overcome by opening the interiliac vein with a stent by interventional radiology before transplant. The graft was then transplanted in the left iliac fossa, thereby allowing venous drainage from the transplanted kidney through the left iliac vein and interiliac vein to the upper part of the right IVC and to the heart. Due to the meticulous pretransplant evaluation and preparation, the challenges that this case of renal transplant posed were solved, enabling the patient to receive the graft from his brother and undergo successful surgery. At 6 months postsurgery, the patient showed normal renal function. This case emphasizes the importance of pretransplant evaluations and preparations and the need for high index of suspicion for anatomic variants in donors and recipients. 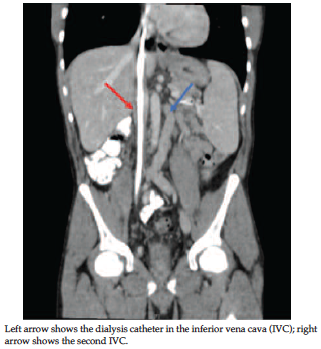 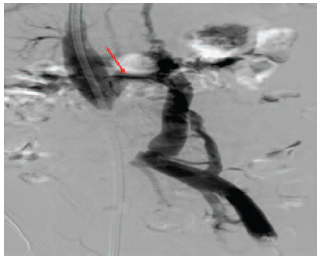 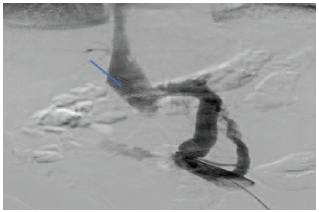