Materials and Methods: Liver transplant outcomes from poisoned donors and from donors with trauma-induced death (as the control group) were compared using data of an Organ Procurement Unit from 2000 to 2013. Procured livers were evaluated via histology findings before transplant. Recipient characteristics were assessed in both groups, and immediate and medium-term (up to 5 years after transplant) survival rates were compared with the use of Kaplan-Meier analyses and log-rank tests.

Results: Over a 13-year organ donation program, 1485 livers from brain dead patients were donated. Among them, 115 poisoned donors were evaluated for liver grafts; of these, 74 successful liver transplants were performed. In the poisoned donors, the incidence of reversed cardiac arrest was 54.1%. Likewise, acute kidney injury was detected in 14.9% of the patients, and 16.2% needed urgent dialysis either for clearance of the toxic agents or for treatment of acute kidney injury. No significant differences were observed in 1- to 5-year survival rates, and log-rank test also showed a significance level of 0.83.

Conclusions: Proper case selection strategies can be implemented to expand the donor pool, including use of poisoned donors. Hence, poisoning is not a contra-indication for a referral, which could lead to decreased mortality for patients requiring a liver transplant.

Organ transplant is the best rescue option for end-stage organ diseases.1 Liver transplant programs worldwide include use of deceased and living donors.1 However, the scarcity of transplantable livers has forced the use of marginal donors, who in the past were considered inappropriate for transplant.2 Marginal and deceased donors have been reported to be risk factors for primary liver nonfunction and mortality.3 The procurement of livers from donors with acute poisoning has not been frequently discussed in the literature. Because the number of these donors is low (around 3%),4 few studies with considerable sample sizes have been conducted to determine the impact of this cause of death (with the exception of carbon monoxide poisoning cases) on the quality of transplanted grafts.5-7 Nevertheless, the occurrence of brain death and the responsible agents for this condition have been broadly reported and discussed in toxicology literature.

According to the latest guideline of the American Academy of Neurology,8 careful investigation of patients with regard to brain death and organ donation is warranted to exclude the impact of agents mimicking the condition of brain death. Many agents, including baclofen, methaqualone, meprobamate, and trichloroethylene, can generate complete lack of brain function and weakness of electroencephalographic waves.9-11 In this regard, ancillary tests such as cerebral angiography and transcranial Doppler sonography are useful for distinguishing brain death from drug toxicity.12

In addition to the effects of poisoning on the central nervous system, solid organs, including the liver, may be severely involved in the pathologic process through direct molecular assaults and also metabolic and hemodynamic disturbances.13,14 Previous studies have stated that drug-induced liver injury was responsible for 5% of all hospital admissions and 50% of all acute liver failure cases.15,16

This study was conducted to investigate the quality of livers after poisoning for transplant and to assess the posttransplant outcomes.

The Organ Procurement Unit of Shahid Beheshti University of Medical Sciences in Tehran, Iran, after performing ancillary tests and conducting final confirmation of brain death, evaluated the quality of organs for transplant. Liver allocation for all patients was performed according to protocols established by the authorities of the Iranian Ministry of Health. Our study included livers from poisoned donors and from donors with trauma-induced death (control group), with both groups having similar mean age and prevalence of comorbid factors. In the present study, organ-donation candidates who were lost before organ retrieval in the operation room or patients whose livers were rejected due to biopsy results were excluded from the study.

After liver retrieval, a biopsy was performed to assess final suitability criteria. Therefore, results of biopsies, which were interpreted by expert pathol-ogists, were collected from data included in the liver transplant registry. Immediate and medium-term (up to 5 years after transplant) survival rates were calculated for included recipients. Recipient factors such as age, sex, and disease type of end-stage liver were recorded for both study groups.

Statistical analyses
We used t test or chi-square test to analyze quantitative and qualitative variables. Significance level was set at P ≤ .05. Survival rates of recipients of livers from poisoned donors and trauma donors after brain death were compared at 1 to 5 years posttransplant using Kaplan-Meier study and log-rank test.

Of 115 (7.7%) poisoning deaths investigated during this period, 86 (74.7%) were eligible donors, but 8 were lost before organ retrieval due to hemodynamic instability and intensive care unit casualties; thus, these cases were excluded from our study. In addition, 4 of 78 livers were rejected due to biopsy findings. The rejected livers showed severe necrosis after multidrug poisoning with barbiturate, acetaminophen, tricyclic antidepressants, methanol, and tramadol. Therefore, our study included 74 transplants using donors with poisoning death, with a control group of 74 donors with trauma death. The proportion of each agent responsible for poisoning in donors is summarized in Table 1. Multidrug toxicity was documented for 19 cases (22%), and 16 cases (21.6%) became actual donors.

In the poisoned donor group, the incidence of reversed cardiac arrest was 54.1% (40 donors), acute kidney injury was detected in 14.9%, and 16.2% needed urgent dialysis either for clearance of the toxic agents or treatment of acute kidney injury. Table 3 shows the proportion of different liver failure-causing diseases before transplant in the recipients. As shown in Table 3, there were no significant differences between the 2 study groups.

Survival rate
Figure 1 compares survival rates between the 2 groups of liver recipients using Kaplan-Meier analyses. As shown in Figure 1, no significant dif-ferences were observed in the 1- to 5-year survival rates after transplant (P > .05). Log-rank test also showed a significance level of 0.83.

Organ donation from patients after poisoning is considered from 2 aspects, including the precise diagnosis of brain death and suitability of organs for donation. Today, with cerebral angiography, the differentiation of brain death versus other causes of loss of consciousness is more clearly possible.18

A critical factor in the donation process is donor pool size and the urgent need to provide organs at the proper time to patients on wait lists. As shown in our study, 7.7% of potential donors had poisoning. In addition, although the ideal donor is defined as a trauma victim of less than 40 years of age, supply and demand are becoming unbalanced, with the ideal supply shrinking and demand increasing.19

Multiorgan failure may occur after lethal intoxication. This may cause the liver to be directly or indirectly affected via hepatocellular injury due to toxic metabolites. Our study showed that the quality of livers procured from donors after poisoning and trauma death was similar, although acute kidney injury and need for dialysis was observed among poisoned donors.

Although poisoned donors have not always been considered as marginal donors,20 both donation and transplant teams are circumspect about the allocation of poised donors. In a study from Luckraz and associates, over a 21-year interval, only 0.5% of intrathoracic organs were procured from donors after carbon monoxide toxicity. The group showed a 77.8% long-term survival rate for the recipients.21 Leikin and colleagues demonstrated that poisoning is not an absolute contraindication for both liver and kidney donation. In their study, the 1-year survival rate of liver graft recipients of poisoned donors was not significantly different from that of a national 1-year liver survival rate.22

The release of inflammatory mediators after brain death, along with hypoxia and donor comorbid factors, may result in hepatocellular injury and irregular microarchitecture of the liver. In our transplant unit, 21.4% of procured livers were rejected due to biopsy findings, with most of these being elderly donors.23 In brain dead patients due to poisoning, the rejection rate of the procured liver was 5.1%, which is significantly lower than that of nonpoisoned donors as a whole (ie, brain death due to cerebrovascular attack, brain trauma, and brain tumors).23

There have been reports of successful liver transplants from poisoned donors, as well as successful heart, kidney, lung, pancreas, and cornea transplant procedures, with the responsible agent for donor death mentioned being carbon monoxide,7,24 organophosphate,25,26 opioids,27 barbiturate and benzodiazepines,28 and tricyclic antidepressants.28

In our study, methadone toxicity corresponded to 23% of cases. Currently, methadone maintenance treatment makes this agent accessible in our country of Iran,29 with ease of access leading to a high number of poisoning in children.30 Furthermore, poisoning from methadone can introduce some adverse factors to weaken liver graft resistance against ischemia/reperfusion injury.31 Bacchella and colleagues defined serum creatinine level > 3.0 mg/dL in donors as one of the criteria utilized in prediction of early mortality in a Brazilian liver allocation system.3

Few studies have discussed the outcomes of organ transplant from donors who had cardi-opulmonary resuscitation before death. Accordingly, cardiopulmonary resuscitation has not been shown to be a strong negative factor in liver quality, despite causing biochemical abnormalities in recipients.32 In addition, Cuende and associates showed a positive relationship between metabolic acidosis or donor intensive care unit stay and liver graft loss.33

In the present study, metabolic acidosis, cardiac arrest, acute kidney injury, and hemodialysis were negative outcomes in poisoned donors. Despite these confounding factors, the 1- to 5-year graft survival rates were the same among poisoning death and trauma death donors. 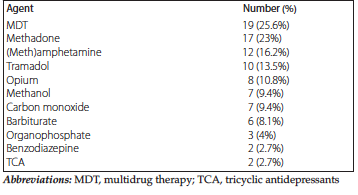 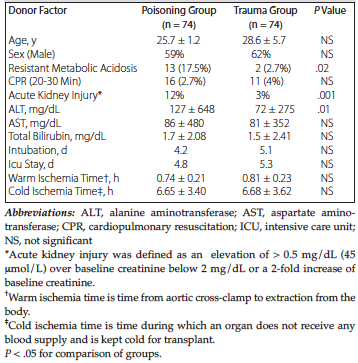 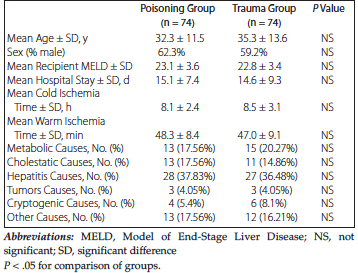 Table 3. Characteristics of Recipients and Frequency of Different Causes of Hepatic Failure After Liver Transplant 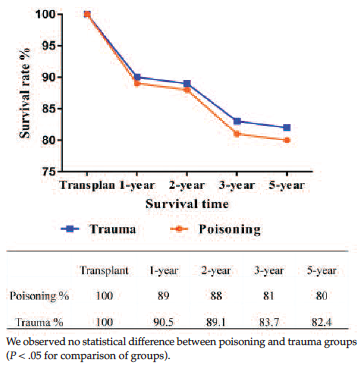