Objectives: Spontaneous splenorenal shunt is a type of portosystemic shunt that develops frequently in the setting of chronic portal hypertension. It remains controversial whether shunt interventions during liver transplant improve transplant outcomes.

Materials and Methods: We conducted a retrospective comparison between deceased-donor liver transplant recipients who received spontaneous splenorenal shunt intervention and those who did not at a tertiary center between 2012 and 2017. Primary outcomes of interest included intraoperative transfusion requirement, hospital length of stay, acute kidney injury posttransplant, portal vein thrombosis, throm­bocytopenia, and 1-year graft and patient survival.

Spontaneous splenorenal shunt (SRS) is the most common subtype of portosystemic shunts with a prevalence of 20% to 35% in liver transplant candidates.1,2 The best management of SRS still remains controversial.3 There has been insufficient evidence on whether closure of SRS during liver transplant would modify postoperative morbidity and graft survival. Most SRS interventions are decided by the surgical team at transplant time as a result of either poor portal venous flow or complications such as gastrointestinal bleeding.4

The potential advantages of SRS closure primarily include ensuring adequate portal venous flow to the graft after transplant. Although liver transplant could relieve portal hypertension, certain post­transplant conditions, such as anastomotic strictures or hepatic venous outflow complications, could increase portal tract resistance. The presence of SRS could facilitate the diversion of portal flow in these settings. In addition to portal steal syndrome, the presence of SRS has been deemed to increase the likelihood of portal vein thrombosis, hepatic encephalopathy, and graft dysfunction.5,6 Animal studies have also demonstrated that the presence of SRS could directly reduce portal flow and decrease the rate of graft survival.7

In the clinical setting, liver transplant patients with SRS not only demonstrate higher posttransplant levels of transaminases than those without SRS8 but also higher rates of biliary tract complications.9 Possible modalities to close SRS include left renal ligation,10 splenectomy,3 direct shunt ligation,11 and endovascular embolization.12 The potential draw­backs of surgical closure of SRS might include longer operative times and thus higher likelihood of surgical and bleeding complications; occasionally, identification and ligations of SRS can also be technically challenging.11 Some observational studies have thus suggested the SRS be left intact without any intervention.13,14

In this study, we analyzed our single-center cohort of patients with SRS, focusing on the natural history of SRS and whether closure of SRS could reduce posttransplant morbidity and mortality in deceased-donor liver transplant recipients.

A retrospective chart review of patients who received liver transplant at the Department of Surgery of the University of Virginia between 2012 and 2017 was conducted. This research project was approved by the institutional review board, and all research participants provided written consent.

The presence of SRS was located based on preoperative radiologic reports, and only large spontaneous SRS were studied. Large SRS was defined as measurement by the radiologist of shunt diameter of 10 mm or more at some level of the shunt (Figure 1). Patients with surgically created or small shunts were excluded. Other exclusion criteria included living-donor liver transplants, patients < 18 years old at the time of transplant, and those with missing data. Deceased-donor liver transplant procedures were performed according to the United Network for Organ Sharing/Organ Procurement and Transplantation Network operative policies. Intervention of SRS was based on surgical team preference.

Primary outcome assessments included intra­operative blood transfusion, hospital length of stay, posttransplant acute kidney injury (AKI), posttransplant portal vein thrombosis, thrombocy­topenia, and 1-year graft and patient survival. The diagnosis of AKI was based on the definition from the Acute Kidney Injury Working Group of Kidney Disease: Improving Global Outcomes. These guidelines specified an absolute increase in serum creatinine of at least 0.3 mg/dL (26.5 μmol/L) within 48 hours, or a 50% increase in serum creatinine from baseline within 7 days, or a urine volume of less than 0.5 mL/kg/h for at least 6 hours.15

Statistical analysis was performed using the Statistical Analysis Systems (SAS) software program (version 9.4; SAS Institute Inc., Cary, NC, USA). The α-error was set at 0.05, and reported P values were 2-sided. Descriptive statistics are reported as percentages, mean values, and standard errors of the mean. Chi-square tests were used for categorical variables, and analysis of variance was used for continuous variables for baseline characteristic comparisons. A multivariate logistic regression analysis was used to assess the relationship between incidences of AKI and intervention status by adjusting for potential confounders.

Of 268 liver transplant recipients, 50 (18.6%) were found to have large SRS before transplant, with 45 of these patients having available outcome and radiologic data for analyses. From this total, 9 patients (20%) received intervention for SRS, including pretransplant balloon-occluded retrograde trans­venous obliteration (n = 5), intraoperative ligation of the left renal vein (n = 3), and intraoperative direct shunt ligation (n = 1) (Figure 2, Table 1).

At baseline, there were no differences in age, sex, Model for End-Stage Liver Disease score, and cause of cirrhosis between the intervention and the nonintervention group (Table 2). In terms of peritransplant clinical parameters, there were no differences in transfusion requirements, post­transplant portal vein thrombosis, hospital length of stay, 3-month platelet count, 3-month serum creatinine level, and 1-year graft and patient survival between the 2 groups. However, patients in the intervention group showed a significantly lower rate of posttransplant AKI (0 cases vs 12 cases; odd ratios = 0.73; 95% confidence interval, 0.59-0.90) (Table 3).

For those with no SRS intervention (n = 36), cross-sectional imaging data could be obtained in 27 patients, which showed complete resolution of SRS in 4 patients (15%). In the remaining patients, SRS persisted with no changes in size compared with initial study (Figure 2).

The findings of our study showed that SRS inter­ventions did not cause additional harm and could be associated with a lower risk of posttransplant AKI. The physiology behind the protective effect on kidney function is difficult to postulate, but one can assume that the closure of SRS may help increase the portal venous flow posttransplant, hence reversing the pathophysiologic mechanisms responsible for hepatorenal syndrome. Interestingly, although not statistically significant, 2 cases of portal vein thrombosis were observed in the nonintervention group, whereas none were reported in the SRS intervention group.

Our series showed that leaving the SRS untouched might increase the risk of posttransplant AKI. However, this is in contrast to the findings of Castillo-Suescun and associates, who performed left renal vein ligation in 6 of 10 patients with SRS during liver transplant. The investigators showed com­parable postoperative serum creatinine levels between patients with and without left renal vein ligation.16 In a recent study from Gomez Gavara and colleagues of 66 patients with spontaneous por­tosystemic shunts (of whom 40 patients [60%] had SRS), shunt ligation (n = 36) was beneficial in terms of the composite endpoints, including primary nonfunction, primary allograft dysfunction, portal vein thrombosis, and encephalopathy.17 Although patient and graft survival rates were also better, rate of AKI was not different between their 2 groups.17 Our findings are actually in line with this study, in that the SRS intervention may have also caused less acute harm to the kidneys. The observed effect seems to be transient, as serum creatinine levels at 3 months posttransplant were similar between the 2 groups.

With regard to the natural history of SRS, the Miami Transplant Institute group reported a spontaneous posttransplant resolution of SRS in 3 of 19 patients (16%), which is almost identical to our statistics.18

Our present study has several limitations. First, we had a small sample size for the intervention group undergoing heterogenous interventional modalities to close the SRS. However, the large difference in incidence of AKI (0 vs 12 cases) warrants future larger studies to better delineate the natural history and consequences of SRS closure, which would allow better defined guidelines to address SRS in the setting of liver transplant. A second limitation is that there are no current radiologic standards on how and where to measure the size of SRS. In the literature, diameters > 1 cm have been used to classify shunts as large,19 and the prevalence of SRS in our study is similar to previously reported rates.1,2 Furthermore, our study is limited to a 1-year follow-up posttransplant. To further determine the real natural history of SRS, prospective long-term studies are needed with follow-up cross-sectional imaging.

Interventions to close SRS in our patient cohort did not increase posttransplant morbidity and mortality and was associated with a reduction in AKI. Most patients without intervention had persistent SRS 1 year after liver transplant. Future studies with larger sample sizes and longer observation intervals are needed to verify these findings. 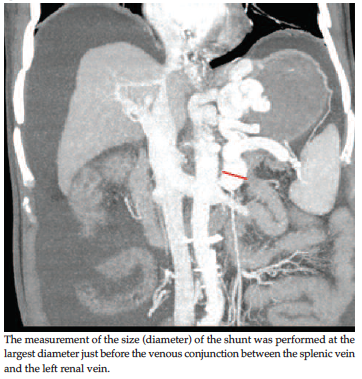 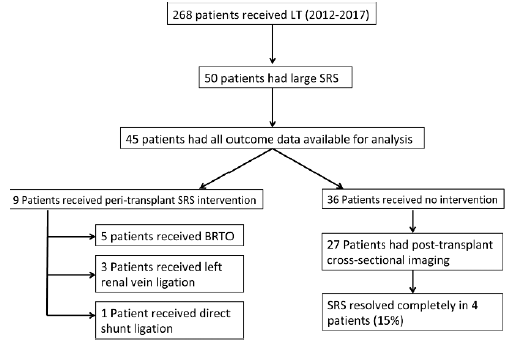 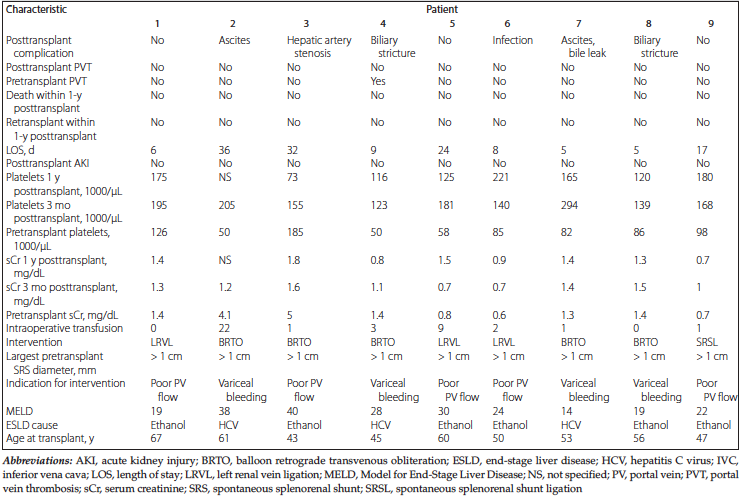 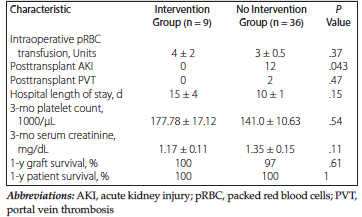