The elderly population is traditionally reported as having decreased immune function with an elevated risk of negative outcomes (eg, infection, graft loss, death) and higher likelihood of receiving a lower-quality kidney.4,5 In addition, elderly age is directly associated with more frequent allograft loss.6 Despite these claims, some have found that elderly recipients have lower rates of rejection and improved death-censored graft survival.7 Thus, current research in posttransplant management of older patients has focused on optimization of immunosuppression to achieve outcomes more comparable to outcomes shown in younger recipients.

Alemtuzumab, a humanized monoclonal antibody targeting CD52 glycoprotein on the cell surface of lymphocytes, depletes T- and B-cell lymphocytic reserves and is utilized in approximately 13% of kidney transplant procedures.8,9 The profundity of immunosuppression, simple dosing schedule, side-effect profile, and potential for relative steroid-sparing regimens make alemtuzumab an attractive choice as an induction agent, particularly for elderly patients. However, research on the benefits of alemtuzumab induction in renal transplant is ongoing, and there are scarce clinical data pertaining to its use in older patients.

We conducted an Internal Review Board-approved and Department for Human Research Protection-approved retrospective analysis of 676 renal allograft transplant recipients induced with alemtuzumab at the University of Toledo Medical Center (Toledo, OH, USA) between March 2006 and November 2015. Donor information was verified with data obtained from the United Network for Organ Sharing database, and data included age, sex, ethnicity, comorbidities, donor type, reason for transplant, rejection status, and infection status. All patient information adhered to ethical guidelines of the 1975 Helsinki Declaration, and informed consent was provided by each patient. Before transplant, patients were screened using flow cytometry to determine the cross-reactivity of T and B cells between donor and potential recipients. All patients had negative crossmatches for both T and B cells, and each case of acute rejection was confirmed with biopsy.

The most common cause of elderly graft failure and graft failure for all patients was death (63.4% vs 39.6%; P < .05) (Table 2). Elderly patients were significantly less likely to lose their graft as a complication of acute (P < .05) or chronic rejection (P < .05) (Table 2). Elderly recipients had fewer deaths by cardiovascular causes than nonelderly recipients (P < .05); all other causes of death were equivocal (Table 2).

As life expectancy increases and the proportion of elderly patients in the population grows, so will the total number of eligible geriatric kidney transplant candidates. When compared with younger can-didates, outcomes after kidney transplant in elderly patients have been documented as inferior; however, in carefully selected cohorts, mortality is decreased and life expectancy is increased compared with patients who are maintained on dialysis.5,10-16 Despite the known age burden on transplant recipients, outcomes in elderly kidney transplant recipients after alemtuzumab induction have not been clearly reviewed. Alemtuzumab is a useful adjuvant for modern immunosuppressive induction because it aims to equalize the outcome disparities between older and younger recipients.

The number of kidney transplants required by elderly patients is on the rise and is expected to increase as the “baby boomer” generation ages.1 Kidney transplant is viewed as an improvement in the quality of life for elderly dialysis patients but is not without ethical concerns.3 Elderly patients on dialysis inevitably develop hemodynamic, infectious, and metabolic complications, yet kidney transplant can effectively decrease morbidity and mortality.13 Despite the perception that age negatively influences graft and patient survival, kidney transplant still holds a strong survival advantage over conventional dialysis treatment in older patients.17 Denial of kidney transplant based solely on age has become less prevalent, as recent studies have shown that negative outcomes are not directly caused by advanced age.18-20

Schold and associates studied the effects of age on kidney transplant in African American patients and demonstrated a greater risk of graft loss in nonelderly compared with elderly recipients.21 Our analysis did not find such an association. Brooks and associates reported specifically reduced rejection rates in African American patients who are greater than 65 years old compared with White patients of equivalent age at 1, 3, and 5 years after alemtuzumab induction.22 Inferior outcomes would be expected in a cohort composed of patients of high-risk age and ethnic status, but our analyses concurred with the assertion of Brooks and associates regarding the positive effect of alemtuzumab on overall rejection in high-risk populations.

Aside from unspecified endogenous processes, sociocultural and socioeconomic factors such as education and insurance contributed to the outcomes shown in elderly recipients. Higher levels of education are associated with better outcomes.23,24 The superior outcomes shown with higher education can be attributed to better knowledge and insight into the care and management of grafts posttransplant. Our analysis showed that, although elderly patients had less advanced education, this fact did not have a deleterious effect on graft maintenance or survival. Private insurance provides patients with better health care access, financial stability, and effective monitoring of detrimental comorbidities that may damage grafts.24 Our analysis showed that elderly individuals had more private insurance, which could have contributed to similar rejection and short-term survival benefit.

Our analysis indicates that advanced age is not a significant risk factor for rejection. Because our overall rejection rate was comparatively high, the immunosuppressive protocol was altered in 2015 to provide maintenance steroid management for high-risk patient populations. It is unclear whether elderly recipients experience greater or lesser rates of acute rejection than younger patients. Previous reports have stated that elderly recipients have decreased acute rejection and attributed this decrease to reduced naïve T cells and total number of mature B lymphocyte precursors.3,25 In contrast, other studies have indicated increased rates of acute rejection and decreased graft and recipient survival among elderly recipients when induced with alemtuzumab.4,5 Hurst and associates and others showed that higher rates of rejection, death, and graft loss in the elderly population were associated with alemtuzumab therapy compared with other induction regimens.4,26 In contrast, the present analysis found no significant difference in overall and interval rejection but found significant differences in long-term patient survival.

Coles and associates and Zhang and associates previously reported that certain cell types that predominant in the graft after transplant can influence recipient outcomes.27,28 Our review supported this notion by the presence of graft-damaging host neutrophils in the biopsies.29 Neutrophil expression of CD52 lends these cells susceptible to alemtuzumab induction; moreover, in individuals who presented with ACR, neutrophils can present in abundance.30 We report that elderly patients had increased rates of ACR compared with antibody-mediated rejection. This disproportionately higher rate of ACR is likely due to increased incidence of neutrophils among elderly patients.

Although our rates of transplant rejection were comparatively high, it is important to recognize that other studies detailing the use of alemtuzumab are related to increased 1-year rejection. Huang and associates previously reported significantly increased rates of acute rejection at 6 months and 12 months with alemtuzumab induction compared with no induction, induction with interleukin 2 receptor antagonists, and induction with rabbit antithymocyte globulin (rATG).31 Gill and associates demonstrated that alemtuzumab use in elderly patients was associated with increased risk of overall acute rejection, which was particularly higher in low-risk recipients with high-risk organs.5

As a whole, these findings are comparable with our reported 1-year graft and patient survival rates (95.4% and 99.2%), although our 5-year results (72.9% and 83.1%) are somewhat lower. Our decreased graft survival may be associated with our elevated rejection rates (19.8% at 1 year) discussed previously, whereas differences in patient survival may be due to variations in mean patient age and demographics.

One potential disadvantage of the immuno-depleting regimen (alemtuzumab with steroid minimization) described in this paper may be under-immunosuppression. We noted an overall rejection rate of 27%, higher than the national average and greater than other institutions that utilize alem-tuzumab. In addition, investigations into our rejection diagnoses determined a relatively rapid onset of rejection and more severe rejection diagnoses, characterized by high Banff classification. In the face of these findings, our institution is experimenting with long-term steroid maintenance in individuals preoperatively determined to be at greater risk for rejection.

Notably, our analysis demonstrated that elderly patients were significantly more likely to develop DGF. Increased DGF in elderly patients may result from the elderly patient’s inability to quickly rebound after traumatic burdens, such as surgery, anesthetic agents, transient hemodynamic instability, or chronic comorbidities.34,35 However, other studies investigating DGF have found no strong ties between advanced age and DGF incidence.36 Because of the association between DGF and subsequent rejection, further investigation into age, comor-bidities, and DGF are important aspects of future research in elderly transplant.

The utility of providing a renal transplant to an elderly patient over a younger one is debatable due to the shortened life expectancy in older patients. Prior reports have stated that the benefits of transplant are seen at 1 to 2 years posttransplant.12,18 We found that elderly recipients do have a significantly worse mean patient survival (1488.5 days compared with 1763.5 days); with alemtuzumab, the elderly patients live long enough to witness beneficial effects. Saucedo-Crespo and associates detected no significant difference in death-censored graft survival.18 Our analysis also uncovered no significant variance in death-censored allograft survival rates between elderly and nonelderly patient populations. The elderly recipients may have decreased long-term patient survival, but the extent to which decreased survival is caused by transplant-related factors, as opposed to age-related comorbidities, was not established.

Rates of infection are a common complication associated with kidney transplant, and elderly recipients can develop cytomegalovirus, BK virus, and other opportunistic infections. In our study, we found no significant differences in rates of infection in elderly versus nonelderly patients.

Our current analysis has several significant strengths. Our findings support the well-documented assertion that alemtuzumab induction helps reduce disparities. Most studies fail to investigate the utility in elderly populations due to confounding factors and age-defining limitations. However, our report provides insight into how elderly kidney transplant recipients fare with factors other than age-defining limitations. Our use of a large data set and multiyear standardized protocol allowed a long-term evaluation of elderly and nonelderly recipient outcomes.

Despite our encouraging results, our investigation does have limitations. First, the retrospective nature of the review and database analyses versus a randomized trial provide little room for the control and flexibility shown with an experimental design study. Furthermore, the scope of this analysis was limited to a single transplant center, which may hinder translation to other transplant centers. Finally, the institutional induction protocol did not have an in-center control arm.

Alemtuzumab induction is associated with reduced negative outcomes after kidney transplant when we compared elderly versus nonelderly individuals. No differences were shown in death-censored graft survival and graft rejection throughout the follow-up period between elderly and nonelderly individuals. Importantly, elderly age was not a significant predictor for rejection or death-censored graft loss in individuals with alemtuzumab induction. Future prospective, multicentered, large sample-size studies are necessary to further expound on the present results to determine causation for reduced elderly patient outcomes. 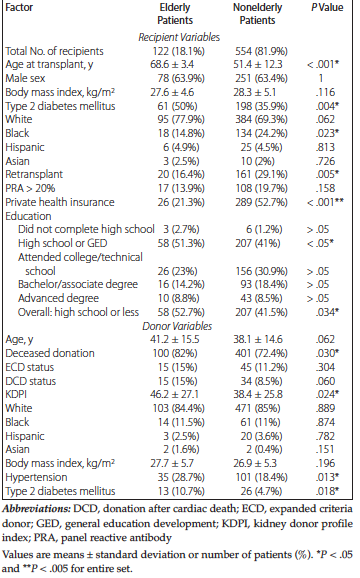 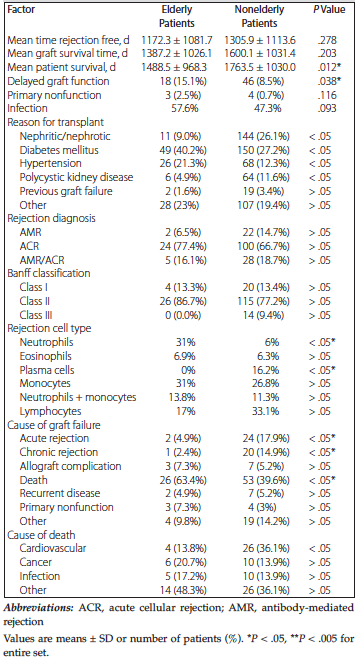 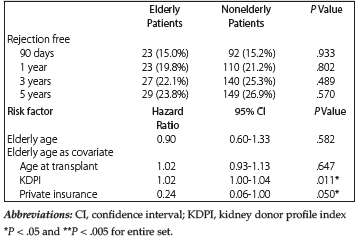 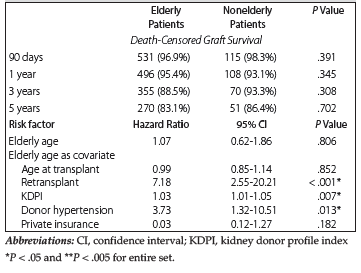 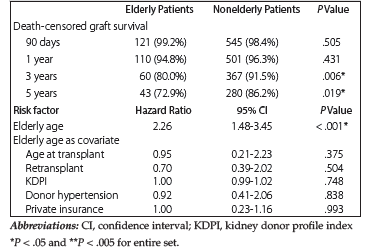 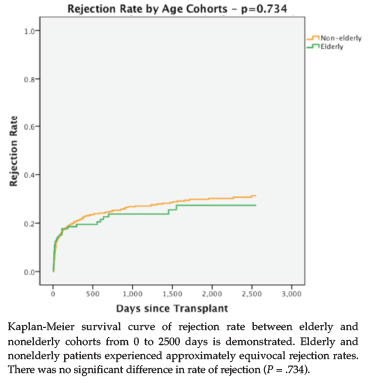 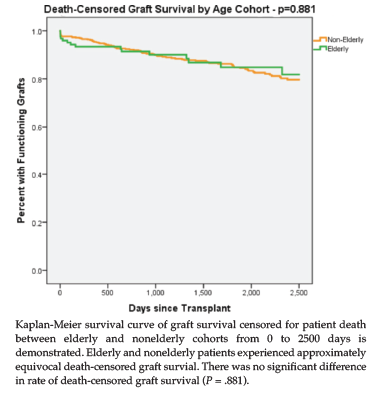 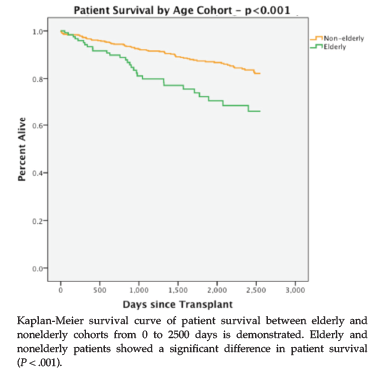