Kaposi varicelliform eruption (KVE) is a rare dermatologic condition that results in extensive vesicular eruptions in predisposed individuals. Here, we report a liver transplant recipient with this condition. To the best of our knowledge, there are no other reported cases of KVE in a solid-organ transplant recipient. The condition is treatable with timely administration of intravenous acyclovir.

A 43-year-old male patient with chronic liver failure secondary to hepatitis C underwent living related liver transplant in October 2015. After transplant, he was started on everolimus, a mammalian target of rapamycin (mTOR) inhibitor, prednisolone, and mycophenolate mofetil for immune suppression. Tacrolimus was subsequently added due to a concern of rejection, as the patient had unexplained increases in aminotransferase and bilirubin levels. He also received valganciclovir and cotrimoxazole pro­phylaxis. His varicella-zoster virus immunoglobulin G test was negative on pretransplant workup.

Three weeks after transplant, he developed protracted diarrhea due to Cryptosporidium along with Escherichia coli bacteremia. Mycophenolate mofetil was stopped. He received a prolonged course of nitazoxanide and antibiotics with improvement.

Four months later, the patient presented with fever and vesicular eruptions on his back and arms with different ages of healing, highly suggestive of chickenpox. Upon presentation, our patient was on everolimus, tacrolimus, and low-dose prednisolone for immunosuppression. The eruptions responded well to intravenous acyclovir with scabbing of vesicles within 72 hours. After 10 days of treatment, he was discharged home.

The patient returned within 5 days of discharge, while on everolimus, prednisolone, and cotri­moxazole, with high-grade fever and extensive umbilicated vesiculopustules involving his entire body. Some lesions were noted to have crusting, and others were pustular, involving the face, eyelids, ears, limbs, trunk, chest, and abdomen (Figure 1 and Figure 2). He appeared anxious with a swollen face and unable to open his eyes due to edema. His blood pressure and pulse were stable at 110/70 mm Hg and 60 beats/minute.

Differential diagnoses included recurrent chickenpox, drug reaction due to everolimus, molluscum contagiosum virus, and cowpox. We decided to hold administration of both everolimus and cotrimoxazole and obtained a dermatology consultation.

Tzanck smear was performed on one of the lesions. The smear showed multinucleated giant cells with acantholysis and ground glass inclusions (Figure 3). These findings were highly suggestive of herpesvirus infection. The patient was diagnosed with KVE, a widespread cutaneous eruption in predisposed individuals.

The patient was treated this time with high-dose intravenous acyclovir. His fever and facial edema subsided within 72 hours of treatment, and the lesions improved slowly over 10 days with crusting. He was discharged home on day 20 of admission. On follow-up, his lesions had healed with residual persistent scarring.

Kaposi varicelliform eruption is a widespread skin infection that presents as sudden, painful vesicles, pustules, or erosions. It is also known as eczema herpeticum because it mostly occurs in patients with preexisting skin diseases.1

In the general population, the incidence of KVE, an uncommon disease, is unknown.1 So far, there is only 1 case reported of KVE in a bone marrow transplant recipient. This patient had underlying atopic dermatitis and herpetic folliculitis.2 To the best of our knowledge, we did not find any other cases of KVE in transplant recipients in the literature.

Kaposi varicelliform eruption is mainly as­sociated with underlying skin diseases such as atopic dermatitis, pemphigus foliaceus, ichthyosis vulgaris, seborrheic dermatitis, and irritant contact dermatitis.3 The exact pathophysiology is unknown, and underlying immunosuppression with im­pairment of cutaneous immunity and disruption of natural skin barriers may lead to disseminated infection with viruses.4 The most common virus implicated is herpes simplex virus; however, infections with coxsackievirus A16, vaccinia virus, and varicella-zoster virus have also been implicated.

In our patient, the initial presentation was highly suggestive of chickenpox, and he responded well to treatment. However, he subsequently presented with widespread lesions typical of KVE. This could have been due to varicella virus infection leading to the development of KVE. Varicella infection has been commonly reported to be associated with KVE in children.5 Garg and associates presented a case of varicella-zoster virus infection with KVE in an adult patient with psoriasis.6

Kaposi varicelliform eruption is a dermatologic emergency. Clinically, it presents as a disseminated, monomorphic, dome-shaped umbilicated eruption of vesicles. The upper body is more commonly involved, and the vesicles may be hemorrhagic or crusted. The eruption usually continues for 7 to 10 days, and the lesions may take 2 to 6 weeks to resolve. Symptoms may be mild to severe and may end in scarring.7 Our patient presented with typical lesions and high-grade fever, which we clinically diagnosed as KVE. He recovered fully with appropriate treatment, although with considerable scarring.

Tzanck smear is the fastest reliable method of diagnosis. Findings from our patient’s Tzanck smear included multinucleated giant cells, acantholysis, and ground glass inclusion suggestive of varicella virus infection. However, Tzanck smear is a nonspecific test, and direct fluorescence antibody staining is more exact in distinguishing varicella from other viruses.8 Unfortunately, we did not perform varicella-specific tests such as immuno­fluorescence or polymerase chain reaction tests because they are not available. However, it should be noted that a history of recent chickenpox, clinical presentation, and Tzanck test are highly suggestive of KVE.

The optimal treatment of KVE is high-dose intravenous acyclovir. Oral acyclovir and valgan­ciclovir have been used in milder cases. Topical steroids are not recommended as they may worsen the disease.5 An ophthalmology consult should be obtained in patients when there is concern of eye involvement. Ocular involvement, systemic viremia, and superimposed bacterial infection can increase morbidity in KVE. Mortality rate ranges from 1% to 9% in patients with complications. The disease is generally self-limited. Early diagnosis and initiation of antiviral agents are essential in preventing complications.8,9

An additive risk factor that we identified in our patient was everolimus. Mammalian target of rapamycin inhibitors, like sirolimus, are known to disrupt healing of skin by inhibiting angiogenesis and fibroblasts in the epidermis. Our patient developed chickenpox with disruption of skin barrier while on everolimus, an mTOR inhibitor that we believe attributed to his increased risk of KVE. We stopped everolimus after reviewing the literature, and the lesions resolved while on treatment with acyclovir. There is another reported case of KVE in a patient with metastatic renal cell cancer who was taking everolimus palliatively. The development of KVE in that case was found to be unrelated to the duration of exposure.10

In conclusion, our patient presented with chickenpox diagnosed clinically and later developed typical monomorphic, umbilicated vesicles. Their appearance and the positive Tzanck smear were key clues to the diagnosis of KVE. Furthermore, we linked the use of the mTOR inhibitor everolimus in our patient to poor skin healing, which added to increased risk of KVE.

Kaposi varicelliform eruption should be sus­pected in immunocompromised patients who develop aggravation of skin lesions after varicella virus infection so that early diagnosis and prompt treatment can occur.

From the 1Department of Infectious Diseases, the 2Department of Hepatology and Gastroenterology, the 3Transplant Surgeon, and the 4Department of Histopathology, Sindh Institute of Urology and Transplantation, Karachi, Pakistan
Acknowledgements: The authors have no sources of funding for this study and have no conflicts of interest to declare.
Corresponding author: Maliha Azmi, A4, GF Bath Island Apartments, 16 Mary Road, Bath Island, Karachi, Pakistan
Phone: +92 21 35877545
E-mail: maliha.azmi10@gmail.com 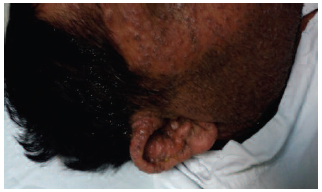 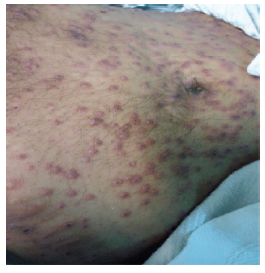 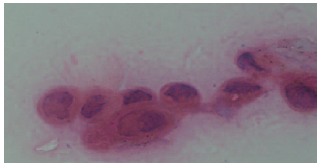