Urolithiasis is a rare complication following kidney transplant. The earliest report was in 1961 by Hume and colleagues.1 Many of the clinical features of urinary stones after transplant differ from those shown in patients without transplant; however, the course is essentially similar to that in nontransplant patients with lithiasis.2,3 Treatment of kidney stones has evolved radically over the years. Renal calculi treatment involves extracorporeal shock wave lithotripsy (ESWL), flexible ureteroscopy and in situ lithotripsy, percutaneous nephrolithotomy (PCNL), endoscopic combined intrarenal surgery, and open pyelolithotomy.4 Here, we present the surgical treatment and outcomes of a male patient who developed a large ureteropelvic impacted stone in his transplanted kidney that was successfully treated with ureterorenoscopy and laser lithotripsy (retrograde intrarenal surgery; RIRS) during surgical ureterotomy at greater than 1 year after transplant.

A 69-year-old white male with a history of virus B-related liver disease and chronic renal failure secondary to uric acid nephropathy had undergone kidney transplant in 2013. Six months after transplant, a Doppler ultrasonography revealed severe hydro-nephrosis of the transplanted kidney associated with acute renal function decay. His serum creatinine level had reached 2.8 mg/dL. The first-line treatment included the placement of a nephrostomy followed by anterograde insertion of a double J ureteral stent. This resulted in rapid renal function recovery, with consequent removal of the nephrostomy. Two months later, serum creatinine levels increased again, and the ureteral stent was replaced endoscopically without complications.

In July 2014, acute renal failure arose once more, but the attempt to remove the double J stent was unsuccessful. A computed tomography scan demon-strated hydronephrosis of the transplanted kidney with a large, 3-cm-diameter ureteropelvic stone and other concretions around the ureteral stent (Figure 1), which caused the device to be immobilized. Abdominal contrast-enhanced nuclear magnetic resonance images showed the anterolateral location of the reimplanted ureter and an angulation of the midureter, which could reasonably be the cause of stone formation. The presence of the pelvic stone left no room to safely place a nephrostomy so that a PCNL could be effectively performed. In addition, the location of calculi along the ureter, with the stent in site, would not allow the treatment to be effective.

In consideration of the peculiar anatomic setting, we then decided that the patient would need surgical correction of the ureteral angulation and ureteroscopic management of the stone through surgical urete-rotomy. Informed consent was obtained, and the possible need for a staged procedure, in order to obtain satisfactory stone clearance, was mentioned. The transplanted ureter and the ureterone-ocystostomy were identified on the right anterior bladder wall. Ureterotomy was performed on the distal third of the transplanted ureter, the double J stent was removed, and the ureter was eventually cannulated. Retrograde pyelography revealed the angulation of the midureter toward the renal pelvis, which was located medially. An access was established with both a standard Teflon wire and a stiff Teflon guidewire. A flexible ureteroscope was then advanced beyond the midureter through the ureterotomy inside the transplanted kidney pelvis. Laser lithotripsy was then effectively performed in accordance with standard procedures by means of Quanta System 200-μm Holmium laser fibers (Quanta Systems, Milan, Italy), and a Zero Tip nitinol basket was used to extract the fragments.

The procedure was concluded after removal of a large amount of stones, confirmed by ureteroscopic inspection, leaving only ungraspable gravel or small fragments in place. At the end of the procedure, the ureter was ureteroscopically assessed for possible lesions. Ureterotomy was closed by means of an absorbable running suture after placement of a new ureteral double J stent. The presence of adhesions made an optimal ureteral angulation correction not possible. The patient’s postoperative course was uneventful, and serum creatinine levels decreased 3 weeks later at discharge to 2 mg/dL.

The reported incidence of allograft stone disease fluctuates significantly, ranging from 0.3% up to 6.3%.5 In patients with chronic renal failure, many factors may predispose to stone formation after renal transplant. Three major predisposing causes have been found: urodynamic disorders after complications involving ureterovesical anastomosis, persistent bacteriuria, and renal tubular acidosis. Moreover, the presence of hypercalcemia and hypercalciuria (as a result of secondary hyperparathyroidism) and the use of calcineurin inhibitors, such us cyclosporine and tacrolimus (associated with hyperuricosuria), are also involved. Renal colic pain is usually absent because of denervation of the transplanted kidney and ureter. The presentation rarely resembles acute rejection or acute tubular necrosis.6 Patients frequently come to the physician in a delayed fashion with decreased urine output and renal failure.

Nonobstructive intrarenal stones may result in recurrent urinary tract infections. A renal ultraso-nography should be performed in transplant recipients with acute renal insufficiency. If hydro-nephrosis is present, a noncontrast computed tomography scan will better characterize the ureteral and the surrounding anatomy. Conservative management of ureteral calculi may be undertaken if the stones are small and if there is little or no deterioration in renal function. However, the intervention threshold should be much lower than that used in nontransplanted patients because of immunosuppression and the recipient’s single functioning kidney.

No level A evidence exists concerning the transplanted population to guide decision making. However, ESWL or RIRS is often considered a reasonable option for stones less than 1.5 cm, and PCNL is often considered for larger calculi. The ESWL procedure has the advantage of being the least invasive treatment modality, even if stone targeting may sometimes be difficult due to the allograft’s pelvic location. The PCNL procedure has resulted in success rates ranging from 87% to 100%,7 making it the option of choice most of the time. However, as shown in our patient, it is not always a viable path because of the anomalies linked to the graft. In addition, our experience with RIRS revealed comparable stone-free rates with less risk of renal damage and bleeding.

Retrograde intrarenal surgery has recently been shown8 to be a good treatment option for midsized stones up to 2 to 3 cm in diameter or in special circumstances, such as pregnancy, anatomic mal-formations, coagulopathy, and solitary kidney, although it still is not the standard of care. In 2013, the European Association of Urology’s Guidelines on Urolithiasis listed RIRS as a viable treatment option for all kidney stones, including stones larger than 2 cm in diameter, for experienced surgeons in high-volume centers. It is noteworthy that, for stones smaller than 2 cm, ESWL is no longer considered mandatory as the first approach; therefore, indi-cations for RIRS have been broadened.9

Native anatomy makes ureteroscopy simple. The natural location of the ureteral orifices allows the urologist to take advantage of the bladder trigone as a backbone to advance wires and ureteroscopes. This advantage is lost in some circumstances, such as shown in our patient, in which the nonnative ureter emerged in a more anterior location. The final way to remove pelvic stones in transplanted kidneys consists of introducing the ureteroscope through a surgical ureterotomy during procedures performed to correct ureteral angulations or anastomotic stenosis. In this way, it is possible to avoid the surgical incision of the renal pelvis, which is difficult to isolate considering its proximity to vascular structures.

Retrograde intrarenal surgery with laser lithotripsy and/or basket extraction is a reasonable option for treatment of small and large stones in transplanted kidneys, especially when other treatment options are not viable. To overcome the difficulty of the complex anatomy typical of a nonnative ureter (which is usually in a more anterior location and often angulated compared with the native one), the ureteroscope can be introduced through a small surgical ureterotomy during a surgical procedure performed to correct ureteral angulations or anastomotic stenosis. 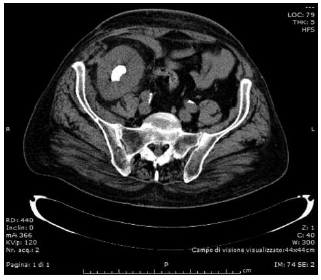