Progressive multifocal leukoencephalopathy is a devastating disease affecting the central nervous system that may be seen in immunocompromised patients. We present a case of a kidney transplant recipient who received tacrolimus, mycophenolic acid, and prednisone and who developed motor deficits, altered cognition, and speech abnormalities, which culminated in a coma. The diagnosis was made by detecting John Cunningham polyomavirus DNA with polymerase chain reaction and observing characteristic findings on magnetic resonance imaging. Soon after immunosuppressive therapy was withdrawn, the patient’s clinical status deteriorated due to immune reconstitution inflammatory syndrome, and pred­nisone was administered. Unfortunately, the patient died about 9 months after onset of symptoms. This case serves to illustrate the fulminant progression of progressive multifocal leukoencephalopathy and the possible complications that may arise when treating it.

Progressive multifocal leukoencephalopathy (PML) is a rare and deleterious demyelinating disease of the central nervous system caused by the lytic destruction of oligodendrocytes via reactivation of the John Cunningham polyomavirus (JCV). Approximately 50% to 80% of adults are seropositive for JCV. However, it remains asymptomatically latent in the bone marrow, lymphatic, and kidney cells of the healthy population.1 Progressive multifocal leukoen­cephalopathy manifests during immunocompromised states and most commonly occurs after development of human immunodeficiency virus (HIV) and malignancies, after autoimmune disease therapy, and, less commonly, after solid-organ transplant.2

The JCV has a predilection for the white matter of the cerebral hemispheres but is also known to affect the cerebellum and brainstem. This can lead to a myriad of different neurologic symptoms, although most commonly these consist of motor deficits, visual field disturbances, aphasia, altered mental status, headache, ataxia, and sensory deficits.3 Patients with PML who are negative for HIV have a worse prognosis and a mortality rate of 84%.4 There have been cases of immune reconstitution inflam­matory syndrome (IRIS), a paradoxical worsening of symptoms shown on radiologic findings, upon restoration of the immune system in patients with PML and HIV who had received highly active antiretroviral therapy.4 Herein, we report a rare case of IRIS in a kidney transplant recipient with fulminant PML, which has only been described once before in the literature.

A 53-year-old male patient was treated with peritoneal dialysis for 18 months due to end-stage renal failure of unknown cause and then received a deceased-donor kidney transplant in November 2011. Antithymocyte globulin was used for inductive immunosuppression. Maintenance immunosup­pression consisted of tacrolimus titrated to 4 to 8 ng/mL, 540 mg of mycophenolic acid twice daily, and 5 mg of prednisone daily.

The patient came to an outpatient follow-up in March 2014 in good health and with a creatinine level of 159 μmol/L. The following month, a total of 29 months after transplant, the patient began to experience speech abnormalities, myalgia, cognitive alterations, changes in his personality, feelings of depression, and insomnia. During the next several days, the patient’s status and neurologic function rapidly deteriorated with the addition of motor deficits and worsening mental status, which progressed to coma.

The patient was admitted to the hospital, and magnetic resonance imaging (MRI) was performed. Fluid-attenuated inversion recovery and T2-weighted MRI scans showed homogenous high-signal-intensity lesions involving the subcortical and periventricular white matter of the left frontal lobe and right thalami. Heterogeneous high-intensity lesions were shown in both of the subcortical parietal-occipital regions with an emphasis on the right hemisphere. An axial T2-weighted image showed a high-intensity lesion involving the splenium of the corpus callosum (Figure 1).

The diagnosis of PML was made when polymerase chain reaction (PCR) testing of the patient’s cerebrospinal fluid (CSF) revealed more than 1 × 106 copies/mL of JVC. After confirmation of PML, immunosuppressive therapy was discontinued. However, the patient’s neurologic symptoms did not improve, and the patient developed broncho­pneumonia with respiratory insufficiency. After 2 weeks of worsening neurologic status, a second axial fluid-attenuated inversion recovery and axial T2-weighted MRI was done; the scan showed progression of the left frontal lesion and the appearance of new lesions in the periventricular occipital white matter of both cerebral hemispheres (Figure 2). The ensuing deterioration of respiratory and allograft function required endot­racheal tube with mechanical ventilation. Three weeks later, a tracheostomy was performed.

One month later, a small dose of everolimus was prescribed to attenuate allograft dysfunction. A repeat PCR of JVC DNA in the CSF showed less than 1000 copies/mL.

Several blood cultures grew methicillin-resistant Staphylococcus aureus, and urine cultures grew Pseudomonas aeruginosa. The antibiotics given to treat these infections caused renal function to degrade, with creatinine level of 1071 µmol/L, urea level of 46.4 mmol/L, and potassium level of 5.6 mmol/L. His serum hemoglobin was 98 g/L with leucopenia (leukocyte count of 3.1 × 109/L) and lymphopenia (0.8 × 109/L). Acute allograft rejection was excluded as the cause of the laboratory anomalies. Despite the continuous 3-week-long antibiotic therapy, the patient remained febrile with no significant changes in the C-reactive protein level. Immune reconstitution inflammatory syndrome was suspected, and the patient was given 7.5 mg prednisone and everolimus was withdrawn. After a few days, the patient became afebrile, C-reactive protein level decreased, and renal function recovered without the need for renal replacement therapy.

By the following month, the patient’s renal function had significantly improved with a creatinine level of 148 μmol/L, urea of 7.5 mmol/L, and potassium of 3.8 mmol/L. Unfortunately, 8 months later, the patient died due to deterioration of neurologic status with a functioning allograft.

A retrospective cohort of kidney transplant recipients with PML reported that recent blood transfusions, antirejection medications used in the first year, development of a concomitant BK polyoma infection, and panel reactive antibody levels greater than 20% were all significant risk factors for development of PML.4 Certain immunosuppressive medications have a higher association with PML than others. There have been 23 cases of PML attributed to mycophenolate, 7 with azathioprine, 12 with cyclosporine, and 14 with tacrolimus.8

The abrupt decline in health of our patient and the unfortunate mortality that occurred 9 months after onset of neurologic symptoms started with a rapid deterioration of neurologic status within 1 month. One other case mentioned a similar fulminant pattern, causing patient mortality within 3 months.7 Other cases have described a stabilization of PML symptoms within 1 year of immune therapy withdrawal.9 One report of a kidney transplant recipient with PML boasted a complete reversal of all neurologic symptoms due to early diagnosis and discontinuation of mycophenolate and tacrolimus; however, that patient required a graftectomy.6 Although the sample size was miniscule, Neff and associates showed that most kidney transplant recipients with PML died within 2 years of diagnosis.4

The diagnosis of PML in our patient was determined by detecting JCV DNA in the CSF with PCR and observing characteristic changes on MRI. The most definite method of diagnosis is a brain biopsy; however, a biopsy is not always necessary.10 Upon alleviation of immunosuppression, the sensitivity of using PCR for JCV in the CSF may decrease, and less viral copies will be observed,10 as seen in our patient. The rational is that the recovering immune system is better able to control viral replication.

Immune reconstitution inflammatory syndrome has been reported to occur in patients with HIV-PML, arising from 1 week to 26 months after administration of highly active antiretroviral therapy.10 As reported in this group, IRIS symptoms manifest as a paradoxical worsening of neurologic symptoms, despite a strengthened immune system. Steroid therapy has been used to alleviate the clinical status when there is evidence of brain swelling or herniation.11 Interestingly, HIV-PML patients with IRIS have shown a significant survival advantage compared with patients without IRIS.12 The diagnosis of HIV-PML-induced IRIS can be difficult to confirm, with MRI scans showing signal enhancement in only 31.25% of cases.12 This low percentage could be due to gadolinium enhancement being a brief event not captured by the MRI.13 Therefore, this test has low sensitivity, and the number of IRIS patients could be gravely underestimated. In the past, IRIS has been a clinical diagnosis with specific criteria.14

Only one other case exists in the literature describing PML and IRIS in a kidney transplant recipient. A case report by Sauer and associates described a paradoxical worsening of neurologic symptoms after removal of immunosuppression and worsening of MRI images similar to results shown in our patient.6 However, PML was discovered in their patient sooner than in our patient, which may account for the survival of their patient. Risk factors for IRIS in our patient, besides the immunosup­pression, included anemia, male sex, and lymphopenia.14

Unfortunately, due to the rare occurrence of PML and IRIS in kidney transplant recipients, little is known on how to treat this condition aside from withdrawing immunosuppressive treatment, as shown previously.7 This has the caveat of causing graft rejection. The current literature concerning treatment of PML plus IRIS is limited to case reports, with few studies analyzing systematic patient data. In a report by Tan and associates, 54 patients with HIV who developed PML plus IRIS had better survival when given steroids earlier and for a more prolonged duration.11 A single-center retrospective study noted mixed outcomes in HIV patients who received steroid therapy for PML plus IRIS.12 In a literature review that included 46 cases of HIV-related PML plus IRIS, no statistically significant benefit was found in those who received steroid therapy.15 Treatment of PML plus IRIS in multiple sclerosis patients frequently has entailed steroid therapy, albeit with varying degrees of improvement.16 Recent case reports have detailed the utility of the CCR5 antagonist maraviroc in this population. A multiple sclerosis patient with natalizumab-associated PML plus IRIS and an HIV patient with PML plus IRIS showed significant clinical improvements after maraviroc administration.16,17 The CD8-positive T cells of these patients expressed high levels of CCR5, which has been observed to be the main proponent of tissue damage.16 Although theoretical merits were shown, other clinical trials have failed to observe any clinical benefit from treating PML with cytarabine, cidofovir, mirtazapine, or mefloquine.1

If a solid-organ transplant patient begins to experience unexplained neurologic symptoms, the diagnosis of PML should be considered. Prompt removal of immunosuppressive therapy could attenuate the severe neurologic deficits and potentially save the patient’s life. 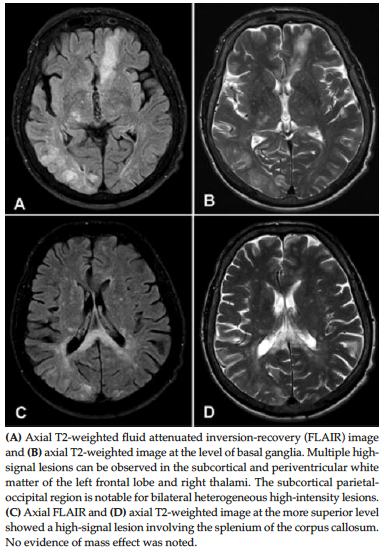 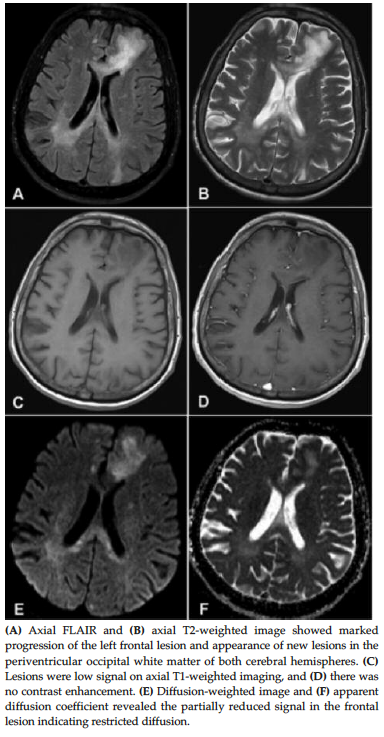