Objectives: Hepatocellular carcinoma remains a major health problem with increased rates of mortality. The curative treatment options are resection or liver transplant. Because the Milan criteria are restrictive for candidates, they have been expanded into alternative sets of criteria. We aimed to evaluate our indications for liver transplant and their results for hepatocellular carcinoma.

Results: Of 652 total patients, 49 adult patients (8%) with diagnosis of hepatocellular carcinoma were included in this study. Median age was 55 years. Hepatocellular carcinoma recurrence after liver transplant was detected in 13 patients. Median overall survival was 64.3 months for all study patients; however, median survival was significantly lower in patients who had recurrence (126.3 vs 43.4 mo for nonrecurrent vs recurrent groups; P = .024). In the expanded criteria group (n = 25), 7 patients (28%) had hepatocellular carcinoma recurrence during follow-up, whereas this ratio was 25% (6/24 patients) in the Milan criteria group, with median time to recurrence of 12.6 versus 11.7 months, respectively (not significantly different).

Conclusions: Multidisciplinary treatment modalities, including surgery, interventional radiology techniques, and medical treatments, will probably lead to prolonged survival in patients with hepatocellular carcinoma. According to our center’s expanded criteria, recurrence rates and time to recurrence were similar to those shown with the Milan group. We showed that Milan criteria can be safely expanded with promising results even in patients beyond Milan criteria.

Hepatocellular carcinoma (HCC) is an aggressive tumor that often occurs in the setting of chronic liver disease and cirrhosis and is the most common liver malignancy in adults. Although mortality rates for overall cancer are declining, HCC still constitutes a major cause of mortality with increasing mortality rates.1,2 The only potential curative treatment options are resection and liver transplant (LT). Five-year survival rates after resection range between 30% and 40%, and many patients experience intrahepatic tumor recurrence during follow-up.3 Liver transplant as a curative treatment modality for HCC is attractive because both resection of the malignant tumor and replacement of the cirrhotic liver that remains at risk for the development of new lesions can be achieved. Unfortunately, most patients are not eligible for either resection or transplant because of tumor extent, underlying liver dysfunction, other coexisting comorbidities of the patient, and lack of donor organs.

Early experience with transplant for patients with unresectable local HCC was disappointing because of reported unacceptable 90-day mortality rates; tumor recurrence occurred in up to 80% of patients, and these patients had shorter long-term survival rates than patients transplanted for nonmalignant disease.4 However, an increasing number of studies have suggested that LT was possibly more effective than alternative therapies in carefully selected subgroups of patients. In the landmark study of Mazzaferro and associates, the 4-year actuarial mortality rate for 48 patients with small, unresectable HCC who underwent LT was 75% and rate of recurrence-free survival was 83%. In a subgroup of 35 patients with early HCC (defined as single lesions of ≤ 5 cm, up to 3 separate lesions, none larger than 3 cm, no evidence of gross vascular invasion, and no regional nodal or distant metastases), the 4-year survival rate was 85%, an outcome similar to patients who have LT because of cirrhosis without HCC. This study established deceased-donor LT as an effective and valid option for the treatment of patients with small unresectable HCC.5 This criterion is known as the Milan criteria (single tumor ≤ 5 cm or at least 3 tumors each ≤ 3 cm and an absence of both macrovascular invasion and extrahepatic spread).

The Milan criteria have been widely applied around the world in the selection of patients with HCC for LT. However, these criteria are regarded as restrictive by some centers, with some suggesting that LT might be a curative option for some other patients with HCC. Center-based criteria have thus been defined for patients outside of Milan criteria, either by enlarging the tumor size, adding an item such as total tumor diameter, and/or increasing the number of tumor nodules.6,7 Others have expanded without regard to tumor size and number by including a detailed evaluation of the presence of major vascular invasion and distant metastases, as defined by our center.8 At Baskent University, we thus developed our criteria for LT for HCC candidates. We started to perform LT in any HCC patient without major vascular invasion and distant metastasis.9

Because the risk of HCC recurrence is 5% to 30% after LT, HCC remains a problem for these patients. Many factors have been studied for an ideal model for tumor recurrence. In addition to tumor size and number, alpha-fetoprotein (AFP) levels, presence of microvascular invasion, neutrophil-to-lymphocyte ratio, and tumor grade have also been defined as predictors of recurrence.10,11 Although comparisons between models have been made, this area requires further evaluations for all clinicopathologic and molecular markers.

In this study, we aimed to evaluate HCC recurrence in patients who had received LT at our center and to identify factors associated with recurrence and survival as a single-center experience.

Between December 1988 and January 2020, we performed 652 LT procedures (443 living-donor and 209 deceased-donor LTs) at Baskent University. From January 1998 to December 2018, 49 adult patients diagnosed with HCC underwent LT at our center. Hepatocellular carcinoma was diagnosed by using AFP levels, abdominal ultrasonography, computed tomography (CT), magnetic resonance imaging, and/or biopsy. In all patients, comprehensive staging was performed before LT, and there was no evidence of extrahepatic tumor disease in those patients. After systemic chemotherapy for recurrence, targeted therapy and locoregional therapies were recom­mended to patients for palliative intent.

Patients were followed in the standard fashion for our institution by a multidisciplinary transplant team. Liver transplant patients were placed on surveillance with evaluation of AFP every 3 months, with abdominal ultrasonography and CT performed every 6 months.

A diagnosis of HCC recurrence was made by radiologic evaluations, which included abdominal CT or magnetic resonance imaging, chest CT, bone scans, and positron emission tomography scans, without histologic confirmation. Overall survival was defined as time from diagnosis (histologic) to death (from any cause); relapse-free survival was defined as time from diagnosis to documented recurrence. Patients who were alive were censored for survival analyses. The Kaplan-Meier method was used to generate survival curves and calculate 3- and 5-year overall survival and relapse-free survival rates. Results are shown as hazard ratios (HR) with 95% confidence intervals. P < .05 was considered statistically significant in all analyses. Data were analyzed using SPSS for Windows software (version 18.0; SPSS Inc., Chicago, IL, USA).

Thirteen patients (26.5%) had HCC recurrence. The recurrences were intrahepatic in 2 of the patients, with the remaining being extrahepatic. The most common place for metastases was in the lung (n = 5 patients). Median overall survival was 64.3 months for all patient groups (Figure 1). Median time to recurrence after LT was 12.6 months (range, 2.1-100.1 mo). Median survival rates were significantly lower in patients who had recurrence during follow-up (126.3 vs 43.4 mo for nonrecurrent vs recurrent groups, respectively; P = .024) (Figure 2). The 3-year and 5-year survival rates were 80% and 68% in the nonrecurrent group and 52% and 17% in the recurrent group, respectively. Overall survival after recurrence was 21.7 months (range, 5.7-65.2 mo).

Of 49 patients, 25 had been evaluated by our transplant team as suitable for LT according to our expanded criteria for HCC patients (beyond Milan criteria). In the expanded group (n = 25), 7 patients (28%) had HCC recurrence during follow-up. In the Milan group (n = 24), 6 patients (25%) had HCC recurrence. Median time to recurrence was 11.7 and 12.6 months (Figure 3) in the Milan group and expanded criteria group, respectively, with no signi­ficant differences between groups according to time to progression (P = .627). Median overall survival was 43.3 and 46.2 months for recurrent patients in the Milan and expanded groups, respectively (P = .416) (Figure 4).

At Baskent University, we developed our criteria for LT for HCC candidates. We started to perform LT in all HCC patients without major vascular invasion and distant metastasis.9 In a previous report from our center, of 35 adult patients who had LT in accordance with the expanded criteria of Haberal and associates (which included patients without major vascular invasion and distant metastases regardless of tumor size and number), 5-year and 10-year survival rates were 58.7% and 49.7%, respectively. Of 25 adult patients who had LT according to our expanded criteria, 7 patients (28%) had HCC recurrence during a median follow-up of 70 months (range, 1-156 mo).8 In our present study, the recurrence rate was 26.5% for all patient groups, but, when examined in terms of expanded criteria, we found that recurrence rates, time to recurrence, and median survival were not different in recurrent patients who had transplant according to the expanded Haberal criteria versus the Milan criteria.

In a study from Zeair and associates of 166 patients who had transplant because of HCC, the recurrence rate was 9.6%, which was lower than reported recurrence rates in the literature and in our study, and median time to recurrence was 14 months. Hepatitis C virus as cause of cirrhosis and poor differentiation of HCC had been reported as the risk factors for HCC recurrence.13

In a multicenter study that compared different models defined in the literature for tumor recurrence after LT in HCC patients (MoRAL, Milan, Up-to-Seven, University of California San Francisco, and AFP models), the MoRAL score performed better in predicting tumor recurrence after LT.15 However, there were patients who overlapped between models, as some patients were low risk according to 1 criterion while being outside of Milan criteria, as supported by long-term experiences in other studies.

Recurrence of HCC remains a problem in LT recipients, and recurrence is related to a poor prognosis. This problem is also shown in experienced high-volume centers. Multidisciplinary treatment modalities, including surgery, interventional radi­ology techniques, and medical treatments, will probably lead to prolonged survival for these cancer patients. After recurrence in disseminated disease, some chemotherapeutic agents and targeted drugs are used for treatment. Tyrosine kinase inhibitors, including sorafenib and regorafenib, have been shown to be beneficial in this patient group. The microsatellite instability test is an important predictive marker for metastatic patients in terms of immunotherapy. Oligometastases can be cured with surgery in selected patient groups after recurrence. Because gene expression analyses have been involved in the treatment paradigm of many tumors, it will be worthwhile to include those molecular tests to identify appropriate HCC patient groups for LT along with other clinical, laboratory, and radiologic criteria defined up to date.

Liver transplant is an attractive curative treatment modality for HCC, by both resection of the malignant tumor and replacement of the cirrhotic liver. Because the Milan criteria have been restrictive for increasing candidates, we expanded our criteria and showed that the Milan criteria can be safely and effectively expanded with promising results even in patients beyond Milan criteria. 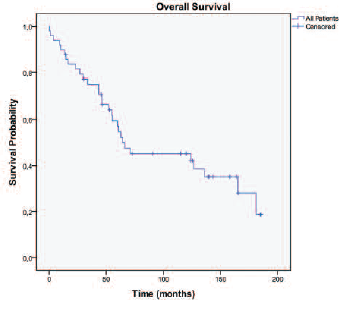 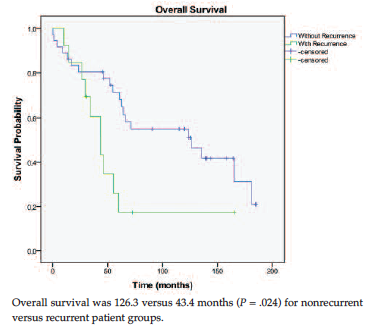 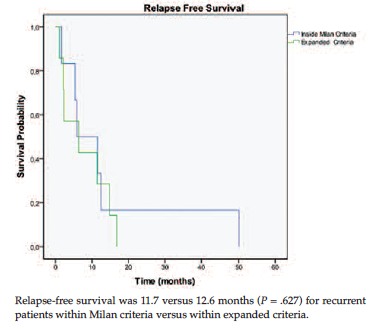 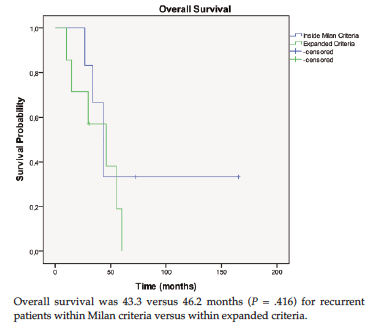