Conclusions: The use of living donors for liver retransplant, despite its technical demand, was shown to be a safe and feasible option, especially when there is scarcity of deceased donors.

Orthotopic liver transplant (LT) is the ideal treatment modality for end-stage liver disease, with continuous advancements in surgical technique and rising numbers of performed surgeries all over the world. Along with this increase, there has been an increased incidence of graft loss, especially after the use of organs from deceased donors after cardiac death and marginal donors.1-4 Multiple controversies remain with regard to liver retransplant (re-LT). Although it has a lower outcome and more economic and ethical issues than primary transplant, it is the only life-saving therapeutic option for irreversible graft failure.5,6

Most studies on re-LT have focussed on deceased-donor liver retransplant (re-DDLT). However, their use decreases the pool of available livers for patients waiting for a first LT, especially in countries with scarce numbers of organs from deceased donors. This fact has raised enthusiasm with regard to living-donor liver retransplant (re-LDLT), which has been considered an alternative to re-DDLT.7,8

In this study, our aim was to determine the indications and risk factors that may affect survival of re-LT and to investigate outcomes of using re-LDLT versus re-DDLT and outcomes with early versus late re-LT.

We conducted a retrospective study on adult and pediatric (< 18 y) patients who underwent re-LDLT or re-DDLT between February 2011 and February 2019 at King Faisal Specialist Hospital and Research Center (KFSHRC), Riyadh, Kingdom of Saudi Arabia. Data were collected prospectively through a dedicated organ transplant database at KFSHRC. Our study was approved by the local institutional review board. Informed consent was obtained from all patients before surgery to use their related prospective data as needed for research work.

Patient characteristics and relevant preoperative, operative, and postoperative clinical and biochemical parameters were collected. These data included age of primary and re-LT donors, indications for primary transplant, causes of graft failure, time between first and second transplant (early was defined as retransplant within 30 days; late was defined as retransplant at more than 30 days after primary transplant), preoperative laboratory tests, and Model of End-Stage Liver Disease (MELD) and Pediatric End-Stage Liver Disease (PELD) scores. Results from 2 pati­ent groups (re-LDLT and re-DDLT) were compared.

There were no specific selection criteria of recipients for re-LDLT versus re-DDLT, with selection dependent on the availability of donors. In re-LDLT, donors were related donors. Preoperative assessments of living donors were per usual steps: laboratory investigations, imaging, and then liver biopsy. Robotic donor hepatectomy was started in our center in May 2018; therefore, re-LDLT procedures after this date were done by robotic surgery.

Surgical technique and posttransplant care
For early (emergency) re-LT (within 1 month), we observe few adhesions and dissections are usually not difficult. For late re-LT, especially with chronic rejection or recurrent viral hepatitis, there are usually heavy adhesions, and these new collaterals require difficult and sharp dissections. Re-LT was done by inferior vena cava (IVC) preservation. Venous anastomosis was done by classic piggyback technique or side-by-side cavoplasty of the recipient IVC at the level of hepatic veins and donor IVC. If the recipient hepatic artery or portal vein was short after hepatectomy, as with difficult dissections in late re-LT, we used vessel grafts from deceased donors for anastomosis. In re-LDLT with right lobe grafts, outflow of anteromedial sector with significant V5 and/or V8 was preserved by polytetrafluoroethylene synthetic grafts or vessels from deceased donors. Biliary anastomosis was done either by duct-to-duct anastomosis or by hepaticojejunostomy, according to the length and quality of the recipient bile duct.

In our study, we defined primary graft nonfunction (PNF) as liver function inconsistent with need for retransplant up to day 10 or death, with absence of other causes of liver failure as vascular complications.9

All patients after discharge were followed up weekly at the outpatient clinic during the first 3 months and then every 1 to 3 months, depending on the patient’s clinical condition. All patients maintained their follow-up schedules. Median follow-up was 27 months (range, 4-82 mo). The Clavien-Dindo classification was used to grade early postoperative complications (grade I to V). Possible risk factors affecting survival were tabulated and studied.

Patient characteristics and preoperative, operative, and postoperative clinical and pathologic data are summarized in Tables 1, 2, and 3. For adults, the main indications for primary transplant were liver cirrhosis secondary to hepatitis B virus (33.3%) and hepatitis C virus (HCV) with hepatocellular carcinoma (23.8%). For pediatric patients, the main indication for primary transplant was biliary atresia (27.2%). For adults, 28.5% required re-LT for hepatic artery thrombosis (HAT) (with 3.2% incidence for all transplant patients) and 23.8% required re-LT for PNF (with 0.9% incidence for all transplant patients). For pediatric patients, the main indications for re-LT were HAT (45.5%) and chronic rejection (36.4%).

Seventeen patients (53.1%) had early re-LT (within 1 month after primary transplant). The main indications for early re-LT were HAT (52.9%) and PNF (35.3%). The main indications for late re-LT were chronic rejection (40%) and recurrence of the primary disease (26.7%). As shown in Table 4, univariate analyses revealed significant differences between early re-LT and late re-LT as regard to indications for re-LT (P = .01), preoperative MELD/PELD scores (P = .02), preoperative alanine aminotransferase level (P = .01), and preoperative international normalized ratio (INR) (P = .02). Our multivariate analyses revealed no significant differences.

Liver retransplant is the most effective and feasible procedure for patients with primary graft failure, with acceptable short- and long-term outcomes. The incidence of re-LT varies in centers between 5% and 22%.10-12 The lower incidence of 3.2% at our center may be due to good selection of donors and recipients for LT and low incidence of overall PNF and vascular complications in our patients. Another reason may be differences between centers as regard to selection parameters for re-LT.5,8

The main indication for re-LT was HAT, which accounted for 11.5% to 36% of re-LT. Other studies have shown PNF to be the most common cause for re-LT, with incidence varying between 10% and 32.3%,13,14 as seen in our study. Some studies have agreed that the indication of retransplant is not a risk factor for prognosis after re-LT,14,15 others have shown that timing of re-LT can affect outcomes. Patients who had re-LT in the first month after primary transplant had lower survival rates than those with late re-LT after the first month. This was explained by higher incidence of a compromised general condition and postoperative sepsis during the early posttransplant period. In addition, patients who require early re-LT usually have acute liver failure, which contributes to lower survival rates versus chronic liver disease.11,15 Although we found that timing of re-LT had no significant risk on patient survival, this may have been affected by the low number of study patients.

Different prognostic factors have been shown to predict outcomes after re-LT, including donor age, recipient age, high preoperative creatinine and bilirubin levels,16 timing of retransplant,12,17 MELD score,8,18 mechanical ventilation pretransplant,16 intraoperative blood transfusion, and the indication for re-LT.7-15 In our study, we observed preoperative mechanical ventilation to be a risk factor for survival in adult patients.

Marudanayagam and colleagues3 reported 1-, 3-, and 5-year survival rates of 66%, 61%, and 57% after first retransplant in adult patients, which were comparable to our results.

Most studies on re-LT have analyzed outcomes with deceased donors, with few discussing results of re-LT with living donors. In a report of re-LDLT in 14 children seen at Kumamoto University Hospital, Miura and colleagues19 reported 3 patient deaths after re-LT. The 1- and 3-year survival rates were 85.7%, and the 5-year survival rate was 78.6%, which are comparable to our survival rate in re-LDLT of 84.6%. The study also reported that incidence of relaparotomy was higher and also affected survival,19 as seen in our study.

In one report of 126 re-LT procedures, Kim and associates reported that 16 patients (12.7%) underwent re-LDLT. The timing of retransplant, MELD score of more than 20, pretransplant portal vein thrombosis, pneumonia, and bacteremia were independent risk factors for survival after re-LDLT. Two patients in their study required interposition graft for portal vein anastomosis, and for hepatic artery anastomosis, the right gastroepiploic vein was used in 2 patients and the great saphenous vein was used in another 2 patients. Kim and associates reported comparable survival rates for re-LDLT versus re-DDLT.7

Dai and associates documented re-LDLT in 11 patients and re-DDLT in 27 patients; the main indications for re-LT were biliary and vascular complications. Significantly smaller graft sizes, younger donor age, shorter cold ischemia time, and longer operative time were shown in patients who had re-LDLT versus those who had re-DDLT, as also reported in our study. Dai and associates reported 1-, 3-, and 5-year patient survival rates of 90.9% in the re-LDLT group and 1-, 3-, and 5-year survival rates of 78.3%, 73.7%, and 63.8%, respectively, in the re-DDLT group, with no significant difference between the groups,20 as reported in our study.

In a study that compared 29 patients with re-DDLT and 15 patients with re-LDLT, Chok and colleagues6 also showed that the re-LDLT group had significantly smaller grafts and shorter cold ischemia time. In our study, we observed higher INR, lower serum albumin, higher MELD score, and more operative blood transfusion in re-DDLT, than the other group with re-LDLT.

Chok and colleagues also suggested that vascular grafts should be prepared for arterial or portal anastomosis, as the vessel from the primary transplant may be unfit; they required 3 long saphenous veins for vascular anastomosis in re-LT. Biliary enteric anastomosis was preferred than duct-to-duct biliary anastomosis as the old duct may be short or unhealthy during dissection of the native liver.8

Our study had several limitations like small sample size -however to our knowledge it is the largest number of re-LDLT cases reported to date- the retrospective design may have resulted in selection bias, also our center has high patient volume and good experience with LDLT, which may have contributed to the favorable outcomes with re-LDLT.

Liver retransplant has acceptable short-term and long-term outcomes in both adult and pediatric patients, especially in high-volume specialized centers. Timing of re-LT as early or late had no significant risk on patient survival. Better outcomes with liver grafts from living donors encourage the use of re-LDLT as a justifiable alternative to re-DDLT. Despite its technical demand of expertise, the use of re-LDLT could be especially useful in countries with shortage of organs from deceased donors where need and supply are unbalanced. 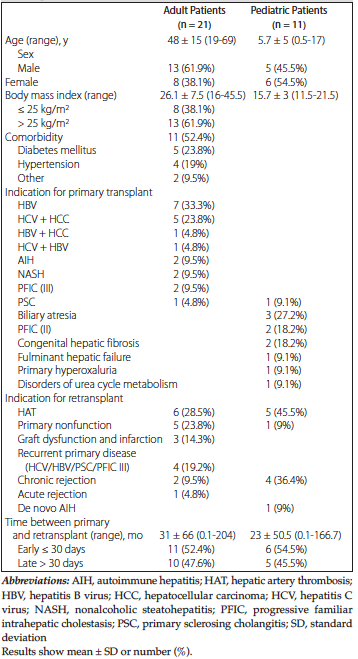 Table 1. Patient Characteristics and Indications for Primary Transplant and Retransplant 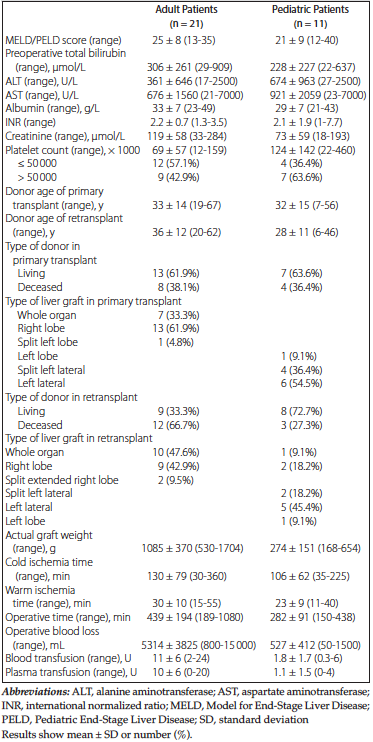 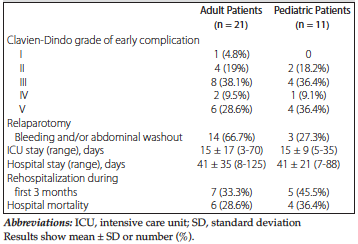 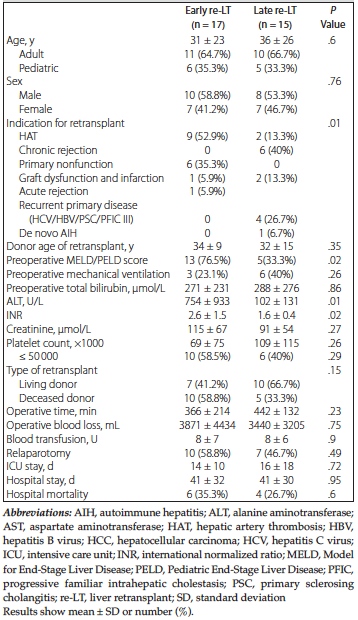 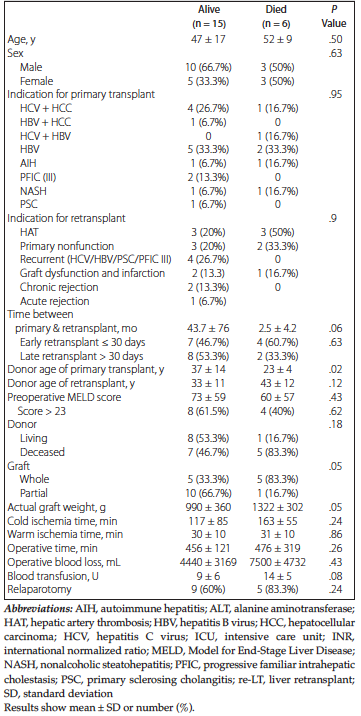 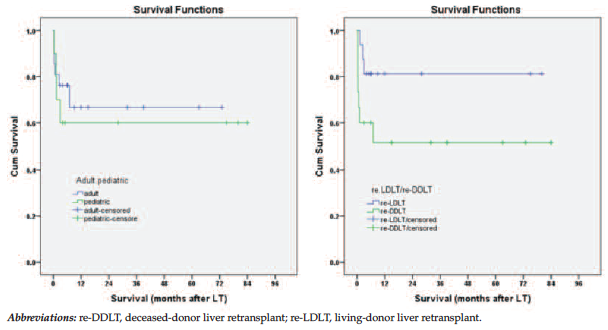