Materials and Methods: Patients who had deceased-donor liver transplant from February 1997 to June 2014 in the hepatopancreaticobiliary surgery and liver transplant unit at Dokuz Eylul University Hospital were analyzed. Inclusion criteria were patients over 18 years of age and who survived more than 1 year after liver transplant. Causes of mortality and related risk factors after the first year were analyzed.

Liver transplant is a globally practiced procedure. Early posttransplant morbidity and mortality have gradually decreased due to advances in surgical techniques, innovations in the field of immuno­suppression, and improvements in medical therapy.1 In recent years, survival rates of patients 1 and 5 years after liver transplant have been reported as 90% and 70%.2

Our study included 157 patients who underwent deceased-donor liver transplant between February 1997 and June 2014 at the Dokuz Eylul University Hospital, Department of General Surgery in the Hepatopancreaticobiliary Surgery and Liver Trans­plantation Unit. Patients older than 18 years and who survived for more than 1 year posttransplant were included.

After liver transplant, calcineurin inhibitors (cyclosporine/tacrolimus), corticosteroids, and mycophenolate mofetil were used as standard initial immunosuppressive treatment for all patients. Mammalian targets of rapamycin inhibitors (sirolimus, everolimus) were used immediately after development of renal toxicity due to calcineurin inhibitor use. For patients with hepatocellular carcinoma (HCC) who underwent transplant, these agents were used within the first year. For patients with high creatinine and blood urea nitrogen levels in the preoperative period, 40 mg of basiliximab was administered during transplant and on postoperative day 4. After discharge, patients were followed once per week for 2 months in the liver transplant clinic. After 2 months, they were seen once per month during year 1 and at intervals of 3 to 6 months after year 1.

Patient-related data were obtained from outpatient medical records and from the hospital’s electronic data system. Causes of mortality and related risk factors, which included recipient sex, age, body mass index (BMI), transplant indication, Child-Turcotte-Pugh (CTP) and Model for End-Stage Liver Disease (MELD) scores, presence of HCC, initial immunosuppressive treatment type, and donor age, were retrospectively analyzed. After median values of parameters were determined, 2 groups were formed as those who were above or below the median score, with comparisons made between the 2 groups.

Statistical analyses were performed using SPSS software version 15.0 for Windows (SPSS, Chicago, IL, USA). Data are expressed as means and standard deviation; median and range values are provided when appropriate. Quantitative variables were compared using the t test and the Mann-Whitney U test. We conducted comparisons between groups with regard to qualitative variables using the chi-square test and the Fisher exact test. Late mortality was calculated using Kaplan-Meier estimates, with comparisons made using log-rank test. P < .05 was considered statistically significant.

Two patients who developed nonanastomotic stricture had undergone biliary reconstruction as single canal and duct to duct. In the first patient, strictures were detected in the bile ducts in the first year after transplant. Control Doppler ultraso­nographic examination showed thrombosis in the hepatic artery. In the other patient, stricture findings were detected in the bile ducts at 6 months after transplant. Cold ischemia time was 10 hours in this patient. In both patients, biliary strictures were progressive. Combined endoscopic retrograde cho­langiopancreatography and percutaneous transhepatic cholangiography-assisted procedures were performed to treat biliary strictures. However, the patients died due to treatment-resistant cholangitis attacks and pericholangitis abscess secondary to biliary sepsis.

In a multicenter study from Watt and colleagues1 investigating mortality causes and risk factors after liver transplant, mortality rate after the first year of liver transplant was 28%. Causes of mortality in 95 patients (12%) who died between 2 and 5 years posttransplant showed that 28.4% were liver related (disease recurrence, graft rejection, biliary complications), 24.2% were due to malignancy, 13.7% were cardiovascular causes, and 10.5% were due to infection. In 12 patients, cause of mortality was not determined.1 In the same study, 128 patients (16%) died between 5 and 12.6 years post­transplant. Their known causes of death were reported as graft failure (27.3%), malignancy (21.1%), renal failure (10.2%), CAD (8.6%), and infection (8.6%). Thus, in the study, hepatic causes and malignancy emerged as the primary causes of late mortality after liver transplant. Most malignancies causing death were reported as de novo malignancy (81% de novo, 19% HCC recurrence). These results bear similarities with previous studies on the subject.5,6 On the other hand, in this study, factors such as advanced age, pretransplant diabetes mellitus, pre- or post­transplant renal insufficiency, and pre- or posttransplant HCC were also reported as risk factors for late mortality.1

In a more recent study, Daniel and colleagues examined the causes of early and late mortality after liver transplant in a study involving 85 031 patients using the UNOS database.4 In this series, 19.9% of the patients died after the first year after liver transplant. At 2 to 5 years after transplant, the causes of mortality were as follows: 20% of deaths due to malignancy, 16% due to hepatic causes, 13% due to infection, 10% due to CAD, 7% due to multiorgan failure, 2% due to hemorrhage, 16% due to unknown causes, and 17% due to various other reasons. Major causes of deaths after the fifth year posttransplant were 14% due to malignancy, 13% due to CAD, and 11% due to infection. The authors also reported late mortality data from their institution study (University of Wisconsin), which involved 1458 patients.4 Accordingly, at 2 to 5 years posttransplant, primary mortality causes were as follows: malignancy in 29%, infection in 16%, hepatic problems in 13%, and CAD in 12%. The main causes of mortality after year 5 posttransplant were malignancy in 22%, CAD in 16%, infection in 14%, and hepatic problems in 5% of patients. Regarding malignancies, 71% of patients with mortality after transplant had de novo disease. The major de novo malignancies included lung cancer (26%), lymphoproliferative disorders (14%), colorectal cancers (12%), and head and neck cancers (9%). According to data reported by both UNOS and the University of Wisconsin, the most important causes of mortality after 1 year posttransplant were malignancy, infection, and CAD.4 The incidence of malignancy in liver transplant recipients and the associated mortality gradually increase over time, but they more frequently occur between 2 and 5 years posttransplant, and most are de novo malignancies. Mortality rates due to infectious and hepatic causes gradually decrease in the later periods, whereas deaths due to malignancy and CAD increase with time.4

In our study, in which 12.7% of patients had died at greater than 1 year, the main causes of late mortality were similar to those in the literature,8-10 although malignancy frequency in our study (rate of 20% de novo and 20% recurrent) was higher than in the literature. The main de novo malignancy after liver transplant was lung cancer. Evaluation of the patients who died due to HCC recurrence showed that the patients had high risk factors in terms of recurrence and mortality. In 3 of the 4 patients with HCC recurrence, the tumor was outside the Milan criteria. In the other case that was radiologically accepted within the Milan criteria, extra tumor nodules were detected pathologically; and this case was considered pathologically outside the Milan criteria. During the period that covered the liver transplant cases in our study, the national organ transplant coordination center in our country had no obligation to meet the Milan criteria for the right to receive grafts from deceased donors in cases of HCC; moreover, our experience with the subject was also limited. As shown previously, survival can be increased due to application of Milan criteria for deceased-donor liver transplant in HCC cases.11 In addition, the risk factors in our cases, including high AFP levels, bilateral multiple tumor nodules, poor differentiation, and microvessel invasion, are considered as predictors of HCC recurrence.12,13

In our study, recurrent hepatitis (15%) and infection (15%) were also major reasons for mortality. Not surprisingly, all recurrence cases were hepatitis C virus. In our clinic, hepatitis B virus recurrence rates of patients who were treated with secondary liver transplant to hepatitis B virus were significantly reduced due to close follow-up, accurate antiviral use, and, if necessary, immunoglobulin therapy. All infections leading to mortality were of lung origin. Some of these cases included stories of delayed admission to the hospital for socioeconomic reasons or inappropriate treatment in health facilities outside our transplant center. These patients died of progressive pulmonary infections. In 10% of cases, mortality was caused by late acute rejection. In these cases, the diagnosis was confirmed histologically and treatment was started immediately. However, despite the treatment, patients were lost due to progressive rejection. Another 10% of mortalities were due to nonanastomotic stricture; the 2 patients with nonanastomotic stricture had risk factors such as hepatic artery thrombosis and prolonged cold ischemia time. In these cases, nonanastomotic stricture could not be resolved despite the endoscopic and interventional radiologic procedures, and attacks of cholangitis developed in this area, causing patient death due to biliary sepsis. Our rate of CAD as mortality cause (10%) is similar to results in the literature.

The limitations of our work are that it is a single-center and retrospective study and has fewer patients. Multicentered and prospective studies on this topic with more patients are needed.

As a result and in accordance with the literature, the main causes of late mortality after liver transplant are hepatic causes, infection, and increased malignancy and CAD over time. Late mortality after liver transplant can be reduced by controlling these factors. For this purpose, outpatient follow-up for patients should be maintained at regular intervals, even in the late period after liver transplant. Early diagnosis of hepatic causes, infectious causes, and malignancies and their early treatments may reduce mortality due to these factors. More frequent screening programs can be established to detect lung cancer, posttransplant lymphoproliferative disorders, and head and neck malignancies, which are common after liver transplant. Advanced age can also be a risk factor for late mortality. However, when patients are included to wait lists, there are no age-related limitations either in our country or around the world.15,16 Although outcomes are worse for people over 70 years and older than for younger recipients, the selection of patients is based on physical performance rather than chronological age. In practice, in selection of such patients, it is not age but the transplant center’s own multidisciplinary evaluations that determine patient selection. 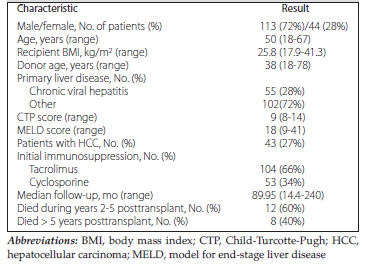 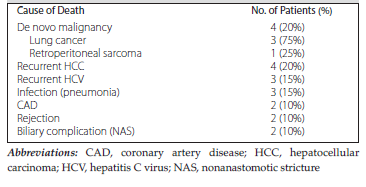 Table 2. Cause of Death After Liver Transplant