Conclusions: Kidney paired donation transplant does not appear to affect transplant center performance. This may be due to the small volume of these transplants currently performed by centers, thereby limiting overall growth in the number of transplants and new registrations.

Kidney transplantation is associated with better long-term survival rates than prolonged dialysis for patients with end-stage renal disease (ESRD).1 However, an inadequate supply of available deceased donor organs limits the number of transplants performed.2 To use as many available organs as possible, centers have implemented methods such as extended criteria donation, donation after cardiac death, and ABO-incompatible donation. However, these donated organs are often suboptimal and can carry a significant increase in costs, as well as result in worse long-term outcomes and early graft loss.3-5

One approach to increase living-donor trans-plants is through kidney paired donation (KPD).9 Kidney paired donation transplant pairs a living donor who is incompatible with the intended recipient but is compatible with another recipient whose donor is compatible with the first recipient. This process can be expanded to create chains of exchanges.10 It has been estimated that, of the nearly 6000 patients with willing but incompatible donors, participation in KPD could result in transplant in about half of them.11,12 Unlike extended criteria donations, donations after cardiac death, and ABO-incompatible donations, KPD is an excellent option to expand kidney transplant without the consequences stated above.

However, in the past decade, there has been a decrease in living kidney donations.8 Several reasons for this have been proposed. Rodrigue and associates suggested that changes in donor selection criteria, an increasing average age of the kidney transplant population, and the overall health status of the general population may contribute to fewer living donors and LDKT.8 Furthermore, the Centers for Medicare and Medicaid Services (CMS) recently published conditions that could potentially cost transplant centers their funding if their performance rates declined, which can be a disincentive for innovative programs like KPD that would increase the number of living donors.13 Despite these challenges, it is important for the long-term outcomes of ESRD patients that the transplant community increases the number of kidney transplants, specifically by increasing the volume of LDKT.

In this study, we aimed to investigate the relationship between KPD participation and LDKT transplant center performance. However, it was unclear how to appropriately gauge this. Traditionally, LDKT performance is calculated as a percentage of the total number of kidney transplants per center. However, this total includes DDKTs, which have no effect on the number of LDKTs performed and are therefore not relevant to the calculation. A second method proposed by Matar and associates suggested measuring LDKT rate “as a percentage of the number of new waitlist registrants.”14

The accurate measurement of the LDKT rate is crucial to the conditions of the CMS that are required for continued funding. The goal of a transplant program is to be efficient and productive, while adhering to CMS standards. Our objective was to determine the productivity of centers and whether they were underperforming or overperforming according to the LDKT rate. Specifically, we analyzed whether the rate of KPD participation affected the overall performance of the center as assessed by both the traditional method and the method described in Matar and colleagues.14 We aimed to assess whether an increase in KPD participation could increase the overall number of LDKTs as well as the efficiency of each transplant center.

Data source
Center-level data on the total numbers of LDKT, DDKT, and KPD transplant procedures performed between 2012 and 2016 were obtained from the United Network for Organ Sharing Organ Procurement and Transplantation Network (UNOS OPTN) database. Donor and recipient criteria and details on how patients were assessed were not included in the database but were not needed for the analysis. The records included information on 165 centers that performed at least one LDKT during the 5-year study period. All work was done in accordance with the Strengthening the Reporting of Cohort Studies in Surgery criteria.15

To control for effects by year, fixed effects of year were explored. We observed a significant increase in the total number of transplants in 2015 and 2016 (b = 4.562, P = .011; b = 9.793, P < .001, respectively) compared with the reference year (2012). However, the regression results essentially remained the same after controlling for these fixed effects, leaving the coefficient of the KPD ratio insignificant (P = .575).

In contrast to the total number of transplants, the number of new wait list registrants did not vary significantly over time. All year fixed effects were statistically insignificant, with P values ranging from 0.103 in 2013 to 0.577 in 2016 (reference year = 2012).

To examine the potential size effect, we per-formed additional regression analyses by dividing the trans-plant centers into 2 groups: those performing 10 or more KPDs annually (18 transplant centers, n = 90) and those performing fewer than 10 KPDs annually (147 transplant centers, n = 735). All of the afore-mentioned conclusions remained the same, with no significant effects of KPD rate on the total number of kidney transplants of that and subsequent years (P > .10).

The theoretical potential for KPD to improve LDKT rates and therefore center performance is significant; however, the relationship between these 2 variables has been unclear. Traditional methods of calculating LDKT rates as a percentage of the total number of transplants occurring annually can be misleading.14 Centers that perform a significant number of LDKT transplants but also add a large volume of patients to their wait list each year are at risk of being overrated. In contrast, centers that perform a smaller number of LDKT transplants but are adding a smaller volume of patients to their wait list may be underrated. In an effort to acknowledge this discrepancy, we evaluated the effects of KPD participation on center performance by both the traditional calculation and the method proposed by Matar and colleagues.14

We propose a few reasons as to why this was observed. First, it could largely be due to the fact that the median number of KPD transplants performed by single centers per year was fewer than 2, which may not be an adequate number to show significant associations. To this end, Massie and colleagues16 demonstrated that more than 1000 additional kidney transplants would occur per year if all centers in the United States performed at least 2 KPD transplants per 100 LDKT-eligible patients. They further examined centers with the highest KPD rates (3.66 KPD per 100 LDKT-eligible) and determined that, if all centers were to participate in KPD at these rates, the number of KPD transplants would increase per year by a factor of 3.2.16

In a single-center study of one of the highest performing KPD programs in the world, Kute and associates observed that LDKT increased by 25% in the year of 2015 as a result of KPD.17 However, this center performed 77 KPD transplants in 1 year. The centers we designated as “high performing” in our final analysis still only completed more than 10 KPDs annually. It may therefore be necessary to increase the volume of KPD transplant procedures before beneficial effects on performance and LDKT become apparent.

The problem of the low number of KPD trans-plants despite its potential to increase LDKT is not new. Several efforts have been made to address this issue.18-20 Analyses of current matching algorithms yielded improvements that optimize pairing in KPD databases.12,21 Other strategies, such as increasing compatible pair participation in KPD pools, have also been proposed.22 As these strategies are imple-mented and further developed, the effects of KPD on LDKT may be able to be better assessed.

Second, due to the overall decrease in living donors in the past 10 years, it is possible that KPD actually stabilized the rate of LDKT. If fewer traditional LDKTs occurred because of a lack of living donors, the LDKT rates and center performance would have been expected to drop. Even at a low volume, KPD may provide enough LDKTs that would not have happened through the traditional system to maintain these rates. If true, continued efforts to sustain or even increase center KPD participation would be strongly indicated.

This study was the first to analyze the impact of KPD on performance by both the traditional method and that proposed by Matar and colleagues.14 Per our assessment, neither showed a significant impact on center performance by KPD. Despite this, we believe that efforts among transplant centers to increase KPD are necessary, as KPD provides a means to increase organ donation without compromise in outcomes. We recommend the creation of one uniform, nationwide, or even worldwide service that would encompass all living donors and incompatible recipients. This would increase chances of finding pairs. Additionally, we suggest that participation in KPD should be a quality initiative that all centers are compelled to comply with in order to be accredited. With a national or international database and an increased commitment of centers to perform KPDs, we believe the effects could be highly significant.

Finally, a true effort to increase organ donation must involve methods to improve not just KPD participation but organ donation among donors of all types. One approach to this is aggressive edu-cation in relevant populations about donor types. Understanding why certain groups of people have lower rates of donation and addressing those issues is also critical to reducing the shortage of organs. Additionally, other models such as presumed consent and donor vehicles should be explored and considered as viable means to increase donation.

Limitations include the previously discussed low volume of KPD transplants, even at high performing centers, and the inability to precisely determine the impact of KPD on the already declining LDKT rate. Further studies are needed to examine these effects and to more accurately describe the role of KPD in transplant center performance. The database used also did not provide detailed information about donors and recipients or how patients were assessed. However, this information is largely unnecessary to answer the question of whether more KPD transplants would result in more LDKTs.

Kidney paired donation is a viable and promising strategy to increase kidney transplant in the United States. We believe that its beneficial effects on LDKT will be better observed as the number of KPD transplants continues to increase. Current objectives for transplant centers should include thoughtful strategies for increasing the volume of transplants through KPD, which will likely clarify the ability of KPD to affect center performance.

Table 1. Summary Statistics for Types of Transplants and Number of New Wait List Registrations Based on the Median Number of Each Type of Donation Per Center Per Year

Table 2. Association Between Total Number of Transplants and Kidney Paired Donation Ratio of the Same Year 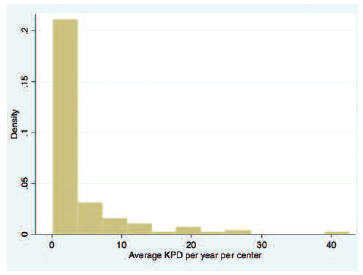 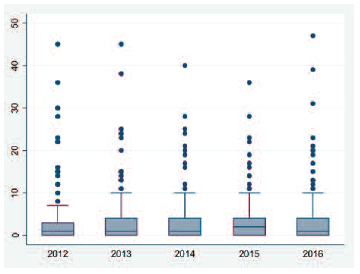