Materials and Methods: We conducted a retrospective study of 456 consecutive pediatric allografts from deceased and living related donors over age 22 years in a single center. Routine perioperative heparin was introduced in 1994 and was subsequently changed to aspirin prophylaxis in 2000. Group 1 comprised 126 patients who did not receive any thromboprophylaxis, group 2 comprised 128 patients who received heparin, and group 3 comprised 202 patients who received aspirin therapy. Variables associated with increased risk of renal allograft loss were examined using multivariable logistic regression.

Conclusions: After our center introduced a change from heparin to aspirin prophylaxis, the thrombosis rate in pediatric renal allografts fell from 9% to 1%. Although there are a number of possible confounding variables, the introduction of aspirin has led to a reduced rate of renal allograft thrombosis.

Study cohort
We studied all recipient and donor data for children who received renal transplants over 22 years. Only first renal allografts were included in our study to prevent reanalyses of children, as this would violate the independent assumption on which our logistic regression analysis is based. Seven patients were excluded because of inadequate donor details (there were no renal allograft losses in these patients).

Before 1994, children undergoing renal transplant did not routinely receive aspirin or heparin prophylaxis. Unfractionated subcutaneous heparin following induction of anesthesia was introduced as routine prophylaxis in 1994, with thrice daily administration thereafter (3000 U/day for children under 15 kg, 4500 U/day for children weighing 15-20 kg, and 7500 U/day for children weighing over 20 kg). Activated partial thrombin time (APTT) was maintained at less than twice the control value. Heparin was discontinued once patients were fully mobile at 7 to 10 days posttransplant. In 2000, oral aspirin (1 mg/kg with maximum dose of 75 mg/day) prophylaxis from induction until at least 1 month posttransplant (unless bleeding problems occurred) was introduced. Aspirin was not discontinued at the time of renal allograft biopsies (as usually they were urgent biopsies without time to reverse effects).

Immunosuppressive regimens included pred­nisolone, azathioprine, and cyclosporine until 1997 when cyclosporine was replaced by tacrolimus. Graft nephrectomies were examined histopathologically.

Statistical analyses
Statistical analyses were performed with SPSS software (SPSS: An IBM Company, version 19.0, IBM Corporation, Armonk, NY, USA). Descriptive statistics were produced for previously described risk factors for graft loss (young age of donor and recipient [< 5 y], sex of recipient and donor, donor status, multiple donor vessels, prolonged CIT, side of graft donation, site of anastomosis, and surgical complications). The Pearson chi-square test was calculated to assess whether these risk factors differed significantly among the 3 groups. Each potential risk factor was analyzed by univariate logistic regression to determine whether there was an association with renal allograft loss, and significant risk factors were included in a multivariable analysis using a stepwise backward elimination model. The level of significance was set at P < .05.

To adjust for confounding variables, multi­variable logistic regression was performed using risk factors found to be significant by univariate analysis. A main effects model of all significant variables (treatment group, recipient age, donor age, CIT, side of graft, and site of anastomosis) showed that, when these confounding variables were factored in, the effect of aspirin on reducing the odds of graft thrombosis was no longer significant (OR of 0.70; 95% CI, 0.13-3.91; P = .687). However, a stepwise backward elimination analysis showed that renal allograft thrombosis in our data can be predicted with a model using treatment group and recipient age only (Table 3). Therefore, although the use of prophylaxis was not an independent predictor of renal allograft thrombosis, the effect of aspirin on reducing the risk of graft loss is significant when considered in conjunction with the age of the recipient.

There were no cases of adverse reactions (such as Reye’s syndrome) or complications (such as gastrointestinal bleeding) related to aspirin therapy reported among patients in our study.

Before 2000, we did not screen for thrombophilia and may have missed relevant cases that resulted in thrombosis, with transplants performed by different surgical teams during that era. A change in practice over time may have led to decreased incidence of risk factors for thrombosis in the aspirin-treated group, including older donors and recipients and more living donations and therefore more left-sided procedures and single vessel grafts with shorter mean CIT. However, because the introduction of aspirin did result in a significant reduction in graft thrombosis, from 11% in patients receiving no prophylaxis and 9% in those receiving heparin to 1% in those receiving aspirin, we suggest that the role of aspirin in this patient population deserves further analysis.

In the adult renal transplant population, previous retrospective studies have reported a significant reduction in renal venous thrombosis from 6% to 1%13 and in graft thrombosis from 5% to 0%15 in patients receiving aspirin.

Our data concurred with previous reports that prolonged CIT and young donor and recipient age significantly increase the incidence of renal allograft thrombosis.6,7 In addition, in our study, left-sided graft and anastomosis to the aorta were both associated with an increased risk of graft thrombosis. Our data were unable to show that aspirin prophylaxis significantly decreased the rate of thrombosis independent of all other risk factors. However, we were able to accurately predict graft thrombosis using a model involving only aspirin prophylaxis and recipient age.

The incidence of renal allograft thrombosis in patients under 2 years of age has been reported to be as high as 30%.14 Of note, in our study, there were no graft losses in renal transplant recipients under 5 years of age who received aspirin.

Aspirin inhibits cyclooxygenase, thereby reducing production of thromboxane A in circulating platelets, a potent platelet aggregator and vasoconstrictor. Cyclooxygenase inhibition also leads to reduced production of prostacyclin (a vasodilator) by vascular endothelium. Low-dose aspirin affects circulating platelets to a greater degree than vascular endo­thelium and thereby reduces platelet aggregation and thrombosis.6 In addition, aspirin inhibits eicosanoid production, which has been reported to lead to an attenuation of renal ischemic-reperfusion injury and allograft nephropathy in animal models.18-20 Of note, 1 study reported a trend toward a lower rate of chronic allograft nephropathy with aspirin treatment, although this did not reach statistical significance.15 Theoretically, therefore, aspirin has the potential to reduce not only early renal allograft loss, as shown in our study, but also late renal allograft loss.15 We suggest that further studies concerning long-term renal allograft survival in pediatric renal transplant recipients receiving aspirin are required.

Recent reports have highlighted the importance of hypercoagulable disorders, such as protein C and S and anti-thrombin III deficiency, antiphospholipid antibodies, and factor V Leiden, prothrombin, and MTHFR mutations, as risk factors for renal allograft thrombosis in children.21,22 In our study, from the cohort of patients who had available thrombophilic screening results, both patients who developed thrombosis without prophylaxis were homozygous for the MTHFR mutation and both patients on aspirin prophylaxis who developed graft thrombosis were heterozygous. In 2006, Kranz and associates21 reported no cases of renal allograft thrombosis in 18 pediatric renal transplant recipients with hyper­coagulable disorders treated with low-molecular-weight heparin followed by aspirin, with 1 serious bleeding complication. The optimal throm­boprophylaxis regimen for such patients remains to be established.

Our retrospective single-center study demonstrated a significant reduction in the rate of renal allograft thrombosis following aspirin prophylaxis in pediatric renal transplant recipients. Although the comparison cohorts were historical groups and we acknowledge the potential confounding differences in group characteristics, the magnitude of the effect of aspirin in reducing the rate of renal allograft thrombosis is such that further investigations regarding its role in this patient population are clearly imperative. 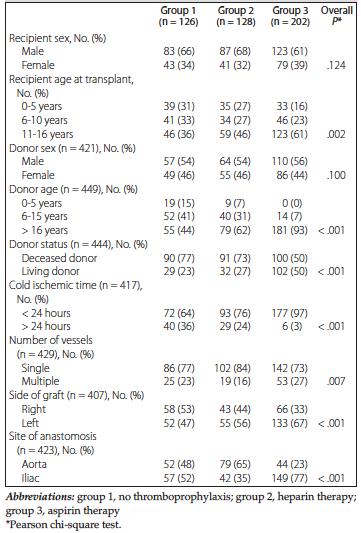 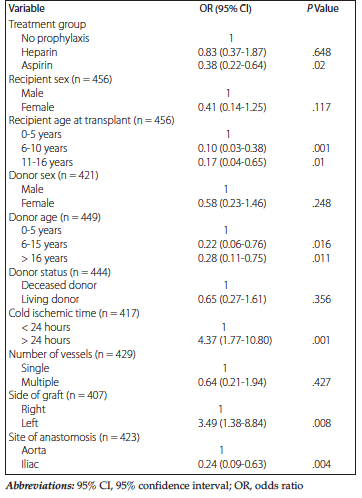 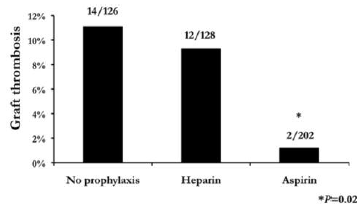