Conclusions: A universal decolonization protocol was successfully implemented and was well tolerated by all patients. Despite successful implementation, we did not observe any significant differences in infection rates between treated patients and historical controls.

Infection is a common cause of morbidity and mortality after kidney transplant (KT). Despite careful pretransplant screening of donors and recipients, as well as vaccination and immuno-prophylaxis, pre-venting infection in the early transplant period remains challenging. Kidney transplant recipients are at high risk of developing infections in the post-transplant period. Risk factors for infection include previous multidrug-resistant (MDR) pathogen exposure, reduction in effective immunity secondary to immunosuppression, central venous catheters, and surgical wounds.1

This retrospective cohort study included patients seen at a tertiary KT referral center (Hahnemann University Hospital, Philadelphia, PA, USA), which performs an average of 40 KTs per year. We compared a consecutive cohort of KT recipients who underwent universal decolonization with a cohort of historical controls (from March 2012 to October 2013) who were not decolonized. Regular training on the decolonization procedure was provided to the nursing staff and transplant team. The decolonization inter-vention was implemented by the transplant floor nursing director, transplant infectious disease physician, transplant pharmacist, and medical staff. The phase-in period was from November 2013 through February 2014, and the 22-month intervention period was from March 2014 through January 2016. Any patient who underwent KT during the intervention period was included in the study, irrespective of whether the patient had a history of MDR organism (defined as resistant to 3 or more antimicrobial classes) colonization or infection.

During the study period, patients at our center received a standard immunosuppression protocol, which included an interleukin 2 receptor blocker or antithymocyte globulin induction, calcineurin inhibitor-based immunosuppression, mycophenolate, and steroid taper. Prophylaxis included therapy to prevent Pneumocystis jiroveci pneumonia for 6 months and valganciclovir to prevent Cytomegalovirus infection depending on risk of infection. Patient demographics, cause of end-stage kidney disease, presence of pretransplant diabetes, comorbid con-ditions, and history of MDR infection were obtained from electronic medical records.

Seventy-eight patients who underwent universal decolonization were compared with 43 patients in the control group. In the overall cohort, the median age was 52 years (interquartile range, 40-61 y). Of total patients, 94 (77.7%) received a deceased-donor KT and 13.2% had a history of infection or colo-nization with an MDR organism. On routine nasal screening, only 2.6% patients were positive for methicillin-resistant Staphylococcus aureus. As shown in Table 1, significantly more patients who received decolonization were on dialysis at the time of KT than controls (97.1% vs 82.5%; P = .01).

In our cohort of KT recipients, a significant number of patients had a history of infection or colonization with MDR organisms. A universal decolonization protocol was successfully implemented and was well tolerated. After implementation, we did not observe any clinically significant differences in infection rates in decolonized patients versus historical controls.

Universal decolonization of patients in the ICU has been shown to reduce methicillin-resistant clinical cultures and bloodstream infections with any pathogen more effectively than targeted deco-lonization or screening and isolation.8 Climo and associates also found that daily bathing with chlorhexidine-impregnated washcloths significantly reduced primary bloodstream infections.5 Decreased microorganism burden on the body surface may have resulted in reduced infection. Because patients in the ICU often have central venous catheters and are at high risk of developing hospital-acquired infections, universal decolonization is a strategy that can be easily implemented.

There are a number of potential reasons that a decolonization strategy that works effectively in the ICU did not have a similar effect for KT recipients. For instance, the most common infections in our cohort were urinary tract infection and wound-related infection. Rather than decolonization of the body surface, minimizing urinary catheter use, using appropriate preoperative antimicrobials, and direct wound care may be more effective strategies in preventing infections during the post-KT period. Of note, no one in our cohort developed a bloodstream infection within 30 days of transplant. Furthermore, the brief hospital course (median of 7 days) may be too short of a period to become colonized with an MDR pathogen.

The universal decolonization process itself offered valuable anecdotal observations about the imple-mentation of infection control principles within our population. We found that universal decolonization was feasible and safe. Patients, nursing staff, and the transplant team were all motivated to help implement these measures. We also noted that attention to these measures also helped reinforce the importance of other components of our infection control protocols. Unlike ICU patients who are often sedated and intubated, most KT patients were awake and able to participate in the decolonization process. We found that patients and their families were accepting of this initiative after the rationale was explained.

Although we did not find that universal deco-lonization led to a significant drop in the rates of either infections or readmissions for KT recipients, the strategy still needs to be evaluated in liver, heart, and lung transplant recipients, who often face a higher risk of bacteremia and/or a higher likelihood of extended ICU stays. It has been shown that an active surveillance strategy with contact isolation and nasal decolonization in liver transplant patients decreased Staphylococcus infection rate by 10-fold.9 By extending currently available universal deco-lonization protocols beyond the ICU stay in solid-organ transplant recipients, hospital infection rates might fall.

A number of significant limitations to this study should be considered. First, this is a retrospective study that utilized historical controls; these control patients may have been different from patients in the decolonization group in undocumented ways. Second, the small sample size may have limited our ability to detect differences between the deco-lonization and control groups. Lastly, risk factors for infections, including diabetes mellitus, obesity, delayed graft function, and immunosuppression factors, were not adjusted due to the limited sample size.

We found that a universal decolonization protocol can be implemented and tolerated in the early posttransplant period. Despite successful imple-mentation, we did not observe any significant differences in rates of either infection or readmission compared with historical controls. We believe that further studies are warranted, particularly in other types of solid-organ recipients.

From the 1Division of Infectious Diseases and HIV Medicine, the 2Division of Nephrology, and the 3Department of Surgery, Drexel University College of Medicine, Philadelphia, Pennsylvania, USA
Acknowledgements: The authors have no sources of funding for this study and have no conflicts of interest to declare. This work was presented at IDWeek 2016 (New Orleans, LA, USA) in October 2016.
*Current address of A. Doyle: Division of Nephrology, University of Virginia, Charlottesville, VA, USA.
Corresponding author: Dong Heun Lee, 245 North 15th Street, Philadelphia, PA 19102, USA
Phone: +1 215 762 4697
E-mail: dhl27@drexel.edu 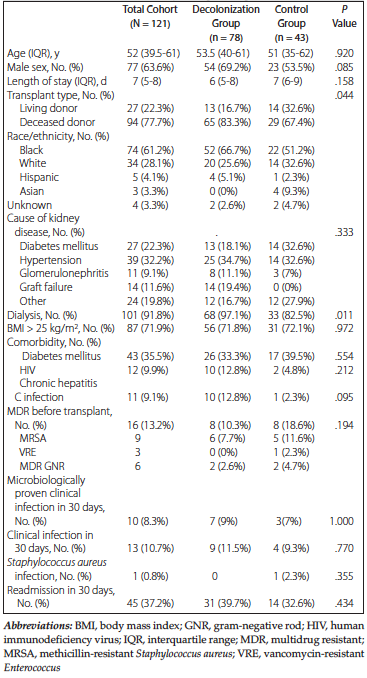 Table 1. Characteristics of the Kidney Transplant Population and Outcomes